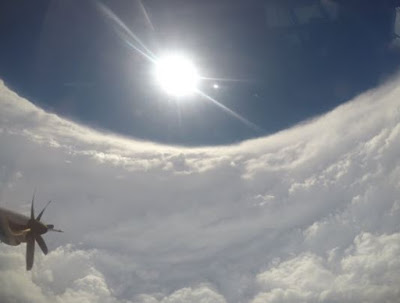 Dramatic photograph of the Sun peering over the top edge of the inner eye wall edge, itself in a dramatic "stadium effect" formation, inside the eye of Hurricane Dorian, September 1, 2019.
Note: I updated this entry at 6:30 p.m. to feature this image I just came across as the new lead.
******* 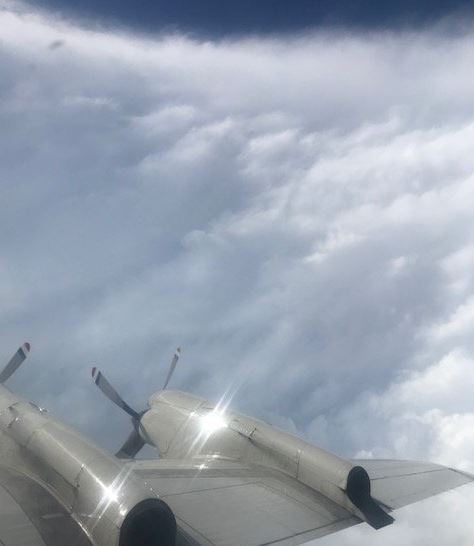 
The images in this entry are primarily from various Capital Weather Gang entries (linked below) and the NOAA GOES East satellite pages.


As alluded to in my previous entry, Hurricane Dorian has grown into a monster tropical cyclone that is currently devastating parts of the Bahamas, specifically, the Abaco Islands, and threatening the nearest of nearest misses along the Florida Atlantic coastline -- provided the storm makes the forecasted sharp right turn that keeps the eye itself offshore by 100 miles … 50 miles … or even less. (Anything less than 50 miles puts that portion of the coastline inside the eyewall with hurricane conditions.) 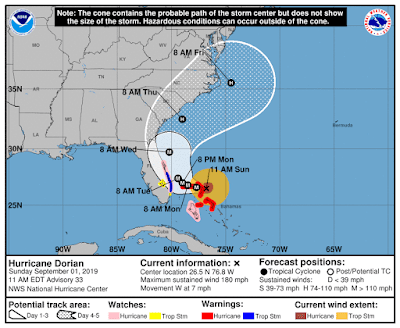 
As of the 2 p.m. EDT intermediate advisory from the National Hurricane Center (NHC), Hurricane Dorian has maximum sustained winds of an incredible 185 mph or very nearly 300 km/h. The central pressure is 911 mb or 26.90 inches. 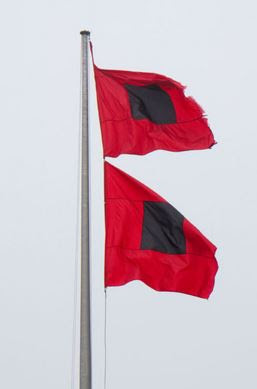 Hurricane Dorian is thus the strongest tropical cyclone on record to cross the northwestern Bahama chain. Per CWG, it also ranks as tied for the 2nd-strongest storm (as judged by its maximum sustained winds) ever recorded in the Atlantic Ocean, behind Hurricane Allen of 1980, and tied with the 1935 Labor Day Hurricane for the title of the strongest Atlantic hurricane at landfall.


The center point as of 2 p.m. EDT is put at 26.5 N and 77.1 W or directly over Great Abaco Island and 185 miles east of West Palm Beach, Florida. Forward motion is still to the west or 270-degee bearing at 7 mph or 11 km/h.
The storm has a spectacular -- indeed, effectively perfect, and therefore ghastly -- satellite presentation and a classic "stadium effect" inside the eyewall, as shown in images taken by a NOAA Hurricane Hunter reconnaissance aircraft earlier today. 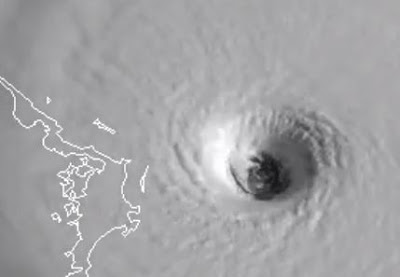 The eye of Hurricane Dorian nearing Great Abaco Island this morning, Sept 1, 2019
Note the shadows cast by the rising Sun.
******* 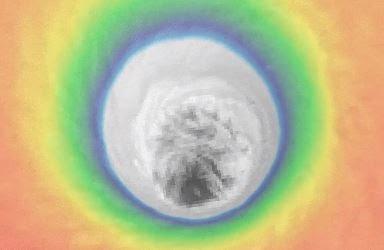 Colorized view looking down the eye of Hurricane Dorian as it was passing over the Abaco Islands this afternoon, Sept 1, 2019
This is about as perfect a hurricane eye images as you will ever see in the real world.
Both these images are freeze frames of animated gif loops. However, those images were initially posted on twitter or other platforms that make it impossible for me to save the full looped image. 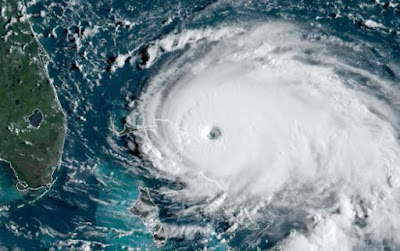 
Based on the many computer model packages, NHC's forecasted track has been insistent -- since early Friday morning -- that Dorian will first slow down considerably (that is already underway) as the steering currents above it collapse and then -- in response to an amplifying trough over the eastern United States -- turn to the north and finally to the northeast quite sharply over the course of two to three days.
The track keeps the center of the hurricane offshore of the Florida coastline, and, indeed, just off the South Carolina and North Carolina coastline -- just brushing the usual hurricane magnet spots of Cape Fear / Frying Pan Shoals and Cape Outlook.
As a result of this forecast, the NHC has (so far) limited the number of tropical cyclone-related advisories on the Florida coastline (since NHC has authority to issue those weather products rather than the regular NWS Forecast Offices). Indeed, where my dad lives in Flagler Beach and points north, there are presently no such weather products in effect.
From north-to-south down the Florida coastline: 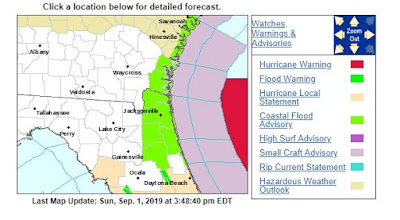 NWS Jacksonville (JAX) county warning area (CWA) advisories, 3:48 p.m. EDT Sept 1, 2019 (with legend)
Remember that the higher priority product takes precedence in the map even if more than one product is in effect at the same time. Here is the full list and their colors in descending priority.
******* 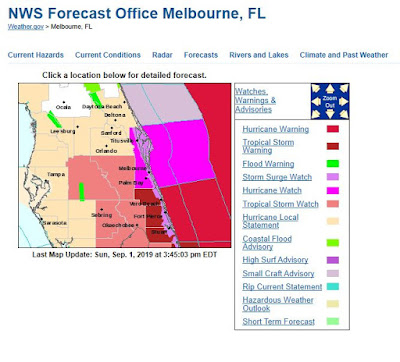 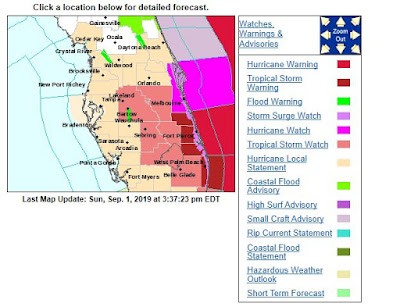 NWS Tampa Bay (TBW) county warning area (CWA) advisories, 3:37 p.m. EDT Sept 1, 2019 (with legend)
While TBW's CWA doesn't extend to the Atlantic coastline, I am showing this since its adjacent areas capture the bottom of the MLB and top of the MFL areas better.
******* 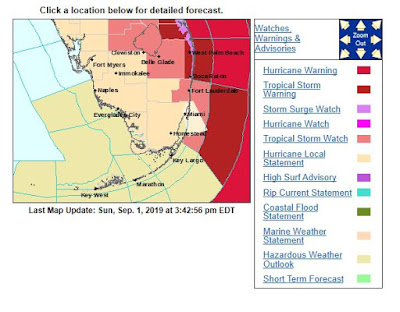 
While I'm hardly in a position to second guess NHC, it seems to me really playing a game of Russian roulette having a monster category 5 hurricane eyewall literally 50 miles off an extended stretch of the Florida Atlantic coastline and trying to micromanage the placement of forecast products in such a way since it is ONLY those products that really capture the public's attention.
It should be noted that the "uncertainty cone" of the official NHC track certainly includes the immediate coastal areas in a potential strike zone (i.e., that the eye crosses). However, the storm could just as easily recurve farther to the east -- with impacts limited mostly to beach erosion from tremendous surf.
Of note, my dad is NOT preparing to evacuate, but if a cat 5 hurricane were to have his trailer park in its crosshairs, I think even he would exercise caution and leave. I'm going to talk to him later tonight after the 11 p.m. NHC updates and products.

Here are some links to CWG entries on the matter (note that the CWG updates these entries for high-impact events to include new content and even revised titles):