Despite -- or maybe because of -- the fact that September is just about over and we are in a drought, I think this is an appropriate song to feature, not to mention a lovely one …
"September in the Rain" by Jo Stafford from her album As You Desire Me (1952)
I did a quick search of my blog and could not find where I've previously posted this song. 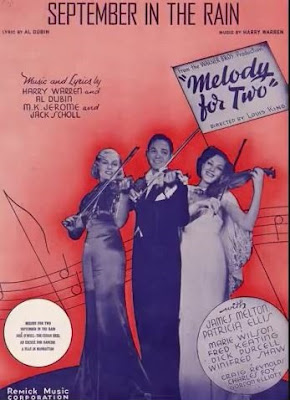 The Keeper of All Knowledge explains the song was written by Harry Warren and Al Dubin in 1937 and introduced by James Melton in the film Melody for Two that came out the same year. A standard, it has been recorded by many artists including Frank Sinatra, Dinah Washington, Doris Day, Peggy Lee, Norah Jones, and even Rod Stewart and Annie Lennox, among others.

This is a lovely version by Jo Stafford.


And we'll end with a very lovely song that I also haven't previously featured …
"I Just Called To Say I Love You" by Stevie Wonder from his album The Woman in Red: Original Motion Picture Soundtrack (1984)
This was the lead song from the album and a Billboard Hot 100 #1 hit for three weeks. This version I found features a montage of images that are intended to be related to the lyrics.
OK, that's all for now. I'll try to post an entry late Monday.
--Regulus
Posted by Regulus at 11:43 PM