Groovy and Trippy: The Brady Bunch House of 1969-'74 TV Show Legend Meets HGTV's Actual Recreated Brady Home of 2019 in A Very Brady Renovation -- With Help of the Brady Kids Actors 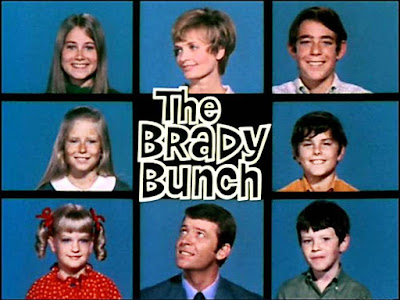 This story makes me happy …


It's about how the HGTV network renovated the house located at 11222 Dilling Street in the Studio City neighborhood of Los Angeles, Calif., used in the exterior shots of The Brady Bunch during the show's 1969 - 1974 run. 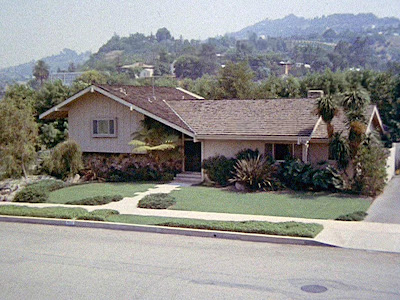 
The renovation was done not only of its main on-air talent such as the Property Brothers (Jonathan and Drew Scott) but also with the active, extensive help of all six of the actors who played the Brady "blended family" children.

The purpose? To create in 2019 the legendary Brady Bunch home EXACTLY as the house exterior and, more importantly, interior appeared to be in the TV show of a half century ago. 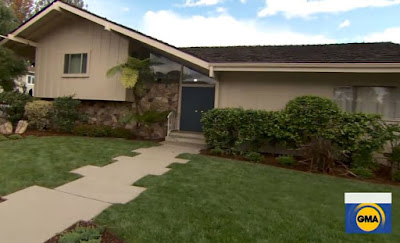 
Added were certain uncertain and/or missing elements from the show such as Alice the Housekeeper's bedroom and a toilet in the main bathroom, since such things were not shown on daytime or primetime television back then. Also added was a second floor window that appeared in the exterior shots but that was a fake window used for those images. 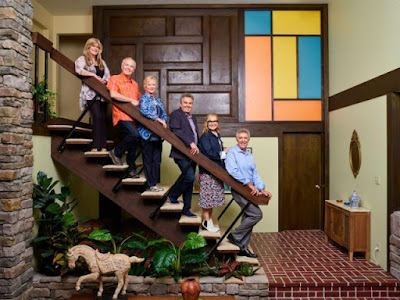 
The house itself went on the market in August 2018 and HGTV snapped it up for $3.5 million -- $1.6 million above the listing price of $1.885 million and blowing away the other offers including that of former NSYNC ('N Sync?) boy band singer Lance Bass.
My understanding is that the six Brady kids actors really had no idea about the house itself until recent years -- and certainly not at the time of the show. But all six were brought into the effort to "restore" the house to its true Brady form. 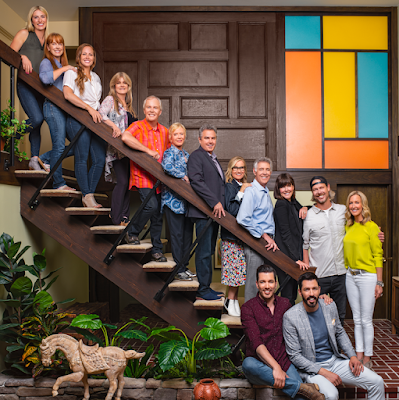 "The Brady Bunch" kid actors and HGTV stars including the Property Brothers, Jonathan and Drew Scott (seated), on the recreated steps of the Brady house.
*******


To be clear, the house restoration was completed in late May but HGTV aired the first installment of the limited series A Very Brady Restoration in a 90-minute "pilot" episode on Monday night (Sept 9th). My understanding is that this will be a four-part series, all of which is being timed to coincide with the upcoming 50th anniversary of the show's debut on Sept 26, 1969 (precisely 2 months before I was born).
The first episode, "Honey, We're Home" scored a huge rating for HGTV (by the standards of cable television). 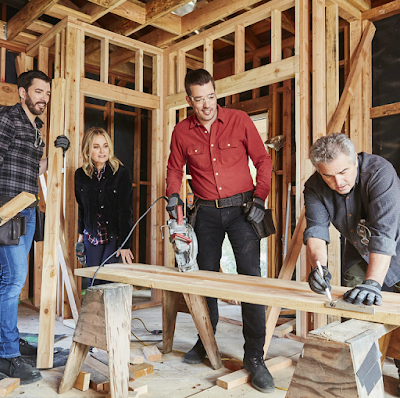 Jonathan and Drew Scott work with Maureen McCormick and Christopher Knight on the renovation of the house at 11222 Dilling Street into "The Brady Bunch" house of TV legend.
*******


Anyway, below is the story as written by Rodney Ho of the Atlanta Journal-Constitution's Radio & TV Talk blog. Original link here. I am including the embedded YouTube clips plus other relevant images I found to break up the text. 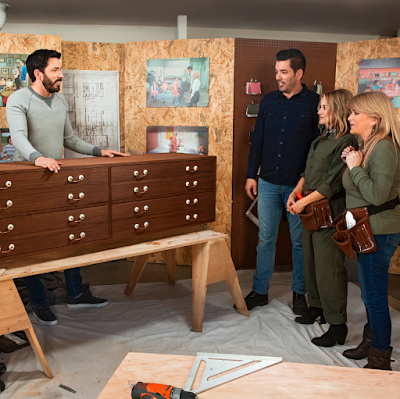 Jonathan and Drew Scott and Maureen McCormick and Susan Olsen in "A Very Brady Renovation"
Of note, I found this CNN article which includes more good quotes from the six actors, but I'm going to stick with the AJC blog site as its comprehensive and funny in a gentle way.
Anyway, without further ado … 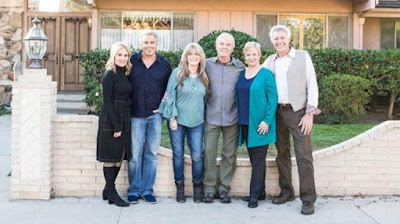 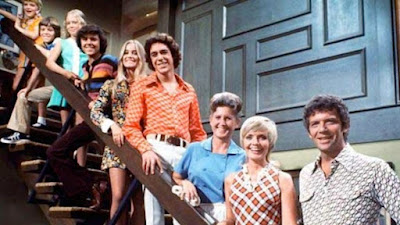 HGTV mines nostalgia, renovates original 'Brady Bunch' house for a TV show with the six 'kids' in tow
Here’s a story of a lovely home that became one of the most famous exteriors of any TV show in history.
And once “The Brady Bunch” home went on sale last year, HGTV had a brilliant idea: buy it and renovate it with the Brady kids helping out! 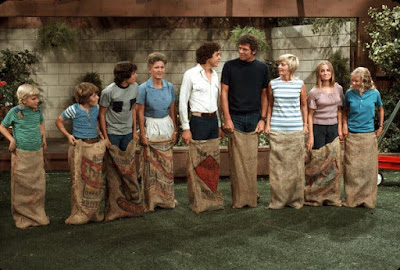 Somehow, this wacky, oddly quixotic and pricey proposition came to fruition in the four-episode series "A Very Brady Renovation" debuting Monday, September 9 at 9 p.m. with a 90-minute episode. It's timed for the 50th anniversary of the show's debut on ABC. 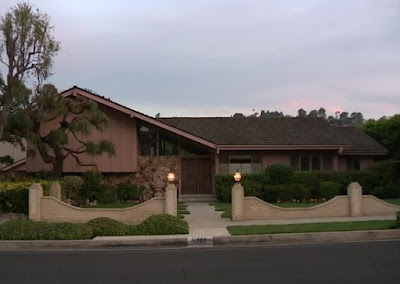 
"The house is so much of the story,” said Loren Ruch, senior vice president of production and development on HGTV, at the SCAD aTVFest in Atlanta in February.
So HGTV purchased the home last year for a whopping $1.6 million above the $1.89 million asking price, outbidding Lance Bass of N’ Sync fame.
They were aware the interior looked nothing at all like the set on the Paramount lot. But only after the producers peered inside did they realize what a massive undertaking this would be to make it resemble the home Americans know and love from the iconic TV show.
“The house inside did not resemble what was on the set,” said showrunner Bob Kirsh. “Plus, the size of the Brady house on the set was 4,000 square feet. This house was only 2,000 square feet. We had to add literally an entire wing.” 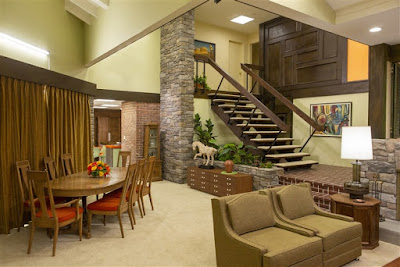 
The Brady actors were paired up with different HGTV stars such as Drew and Jonathan Scott of "The Property Brothers," Leanne and Steve Ford of "Restored by the Fords" and Lara Spencer of "Flea Market Flip."
The show also convinced all six Brady kids to join the show. They are obviously not kids anymore, ranging in age from 58 for Susan Olsen (Cindy) to 64 for Barry Williams (Greg). 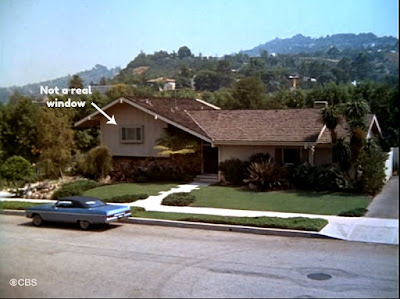 "The Brady Bunch" house as seen in an episode screenshot -- with the fake window noted.
*******


This is the first time all six actors have worked together since "The Brady Girls Get Married" film nearly 40 years ago.
The house was for many months a "mud pit," Kirsh said, so they rented out a home next door for planning and logistics and a place for the talent and crew to camp out. "It was blind luck," he said. "It was on Airbnb. We turned the garage into a command center." 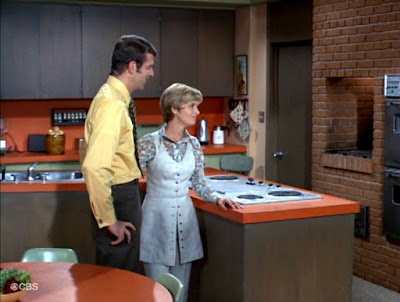 They also had to make sure this could be done in a TV show time frame which is typically... not enough time. That meant greasing the wheels with Los Angeles city officials and given the pop culture gravity of the situation, it worked.
Haha 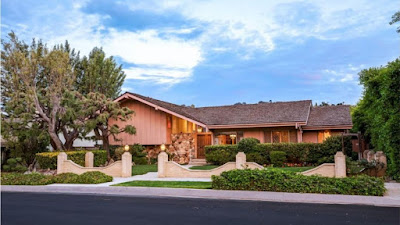 Another picture of the Brady Bunch house before its renovation (without its fake window).
*******


In the end, the project took six months, finishing in May, recreating 15 different spaces, including Alice's bedroom and Greg's attic bedroom when he couldn't stand living with Peter and Bobby anymore. (Given the layout of the house and limits to how tall they could make the addition, the "attic" had to be in the basement.) 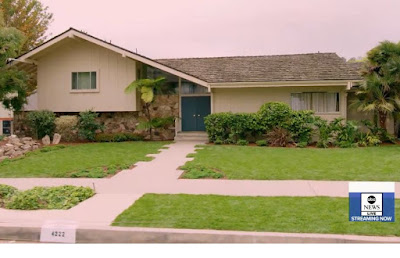 The Brady Bunch house exterior after renovation.
Note that the curb-side painted house number has been changed to 4222 -- rather than its actual 11222 -- to reflect the fact that the Brady family lived at 4222 Clinton Way.
*******


And the actors themselves understood how surreal this all was: 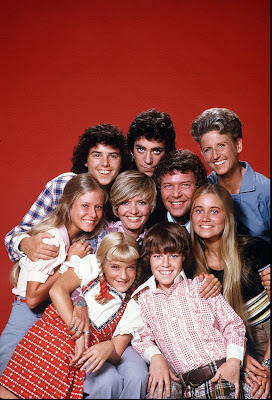 "It's a strange place between fiction and reality," noted Christopher Knight (Peter) after a reveal of the living room.

The first episode features the set up and a lot of destruction of the original home. Among the first re-creations: the iconic staircase. The series will focus on the challenges they face as well as some of the compromises to make it work.


"We want to be as journalistic as possible," said Ruch of HGTV. “We have the viewers involved in the process. We don't want to pull the wool over their eyes."
HGTV was also able to procure the rights to “Brady Bunch” footage so whenever an actor referenced something from the show, they could show the video. Williams, for instance, mentions painting the kitchen and there he is 50 years earlier accidentally painting Alice. 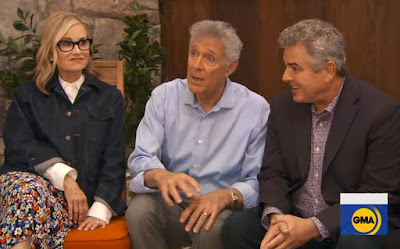 There is a segment where Knight and HGTV star Jasmine Roth of “Hidden Potential” spend way too much time trying to figure out an exact exterior color match, flummoxed in part because the color looked different in vintage photos depending on the lighting.
"Forensic home building," Knight mused.
"I have to get this color right or I'll let America down," said Roth, as if this were the U.S. Olympic hockey team against the Russians in 1980.
Creating or finding furniture that resembled the original 1969 versions was another challenge. (Since props moved around over the seasons, the show committed to what “The Brady Bunch” looked like season one - except for Greg’s attic from season four.) 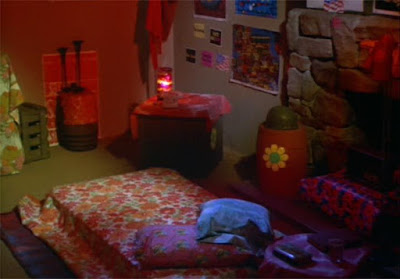 Paramount did have some furniture and props in a storage facility that included a mix of original pieces and those from the mid-1990s movies. The show also sought out the public for specific notable pieces, like the curio cabinet and a cluster of fake grapes on the living room table season one. 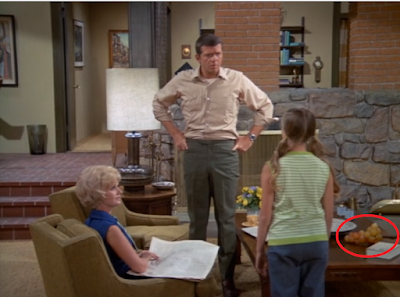 And don't say the producers didn't work hard: it took 83 tries to find the right dining room table and chairs. When Olsen saw it, she said: "It's like I've gone in the way-back machine! I wouldn't be surprised if it was actual set!" 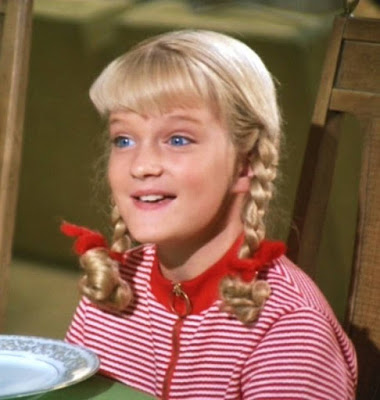 Plus, the home will have operational toilets - unlike the set. Back in 1969, apparently the producers felt it was too uncouth to show actual toilets.
In essence, "The Brady Bunch" was a fantasy version of what a family was like, a gravitational pull that HGTV very much wants to mine.
"This taps into the design and renovation aspects our viewers like," Ruch said, "and the nostalgia is like icing on the cake. It just feels like it belongs on our network."
Even the HGTV hosts who were too young to have seen the show when it was new appreciated the import of the project. 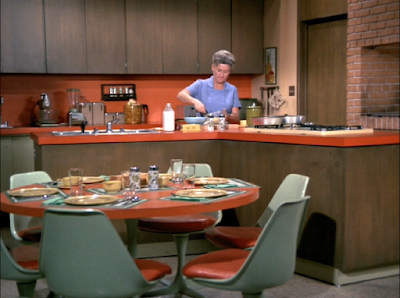 HGTV star Roth, 35, imbibed the show in reruns as a kid. "It was a good representation of a blended family, which really resonated with my family" she said in an interview. "You can't turn on a 'Brady Bunch' episode and not get sucked in." 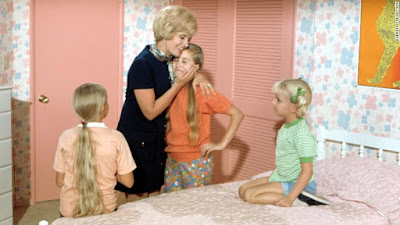 The house, in Roth's mind, "has lurked in our subconscious for so long, it's like going back to a house we grew up with. To see it again like it was 50 years ago, it's trippy!" (I am sure it was no coincidence she used an era-specific adjective there. Groovy!)
Her primary responsibilities were re-creating the master bedroom, build out a bathroom from scratch and replicate Mike’s den, where he did his architecture work. 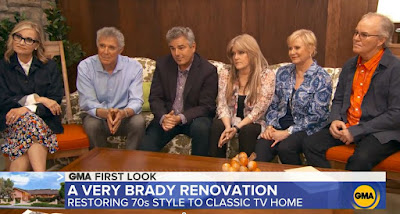 "There were a lot of life lessons learned in the den," Roth said. "The hard conversations happened in there. I had to get the space right!"
It's unclear how HGTV will leverage the home once it's finished. (Roth said she has no idea but she wouldn't object to staying for a night for fun.) 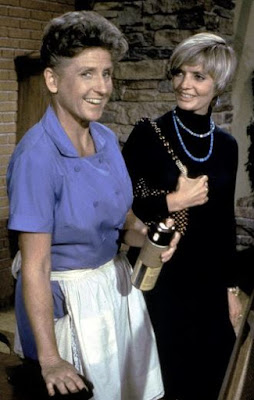 For now, they do have a fan video contest. The prize: Live in the house for a week!

Sadly, the actors who played the Brady parents (Robert Reed and Florence Henderson) and house-keeper (the beloved Ann B. Davis) have died and missed out on all the fun.

But as Maureen McCormick (Marcia) said during the first episode: "I feel like they’re all here with us."