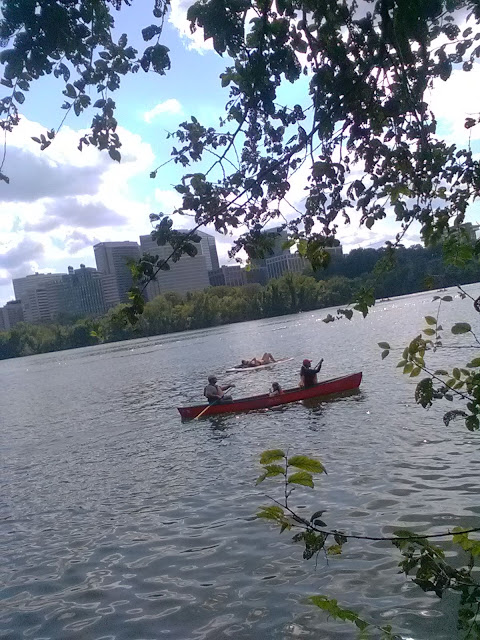 
This entry contains a reposting of a recent Paul Krugman New York Times op-ed column along with a brief antecedent update plus pictures that I took yesterday (on Labor Day) on my walk to Foggy Bottom and then from Rosslyn back home via Georgetown. With the exception of the lead image, they are not captioned -- but the file names contain time and location information. 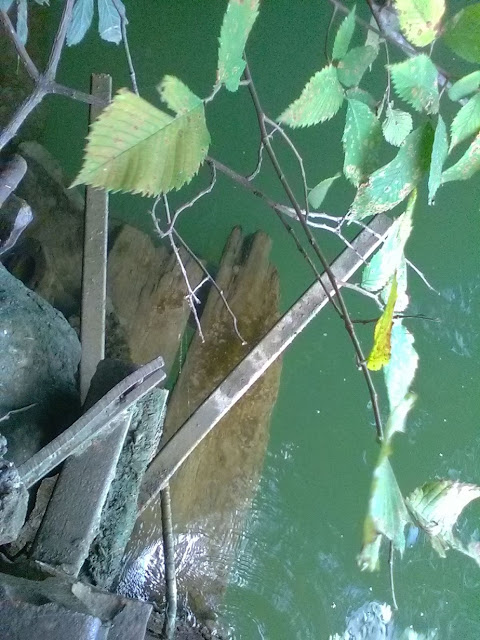 You'll note the multiple Potomac River pics. Two quick points: (1) At least to me, the river appears MUCH less filthy than it used to be; and (2) there are SO many people on the river including paddleboarders these days. On the cleanliness -- or rather, lack of filth -- part, the river actually has a hint of green in it, at least around Georgetown (see image directly above). And the turbidity on Monday was such that you could actually see down 3 to 4 feet into the water.
Oh, yes, I'm also including a few humorous that Aydin provided me. 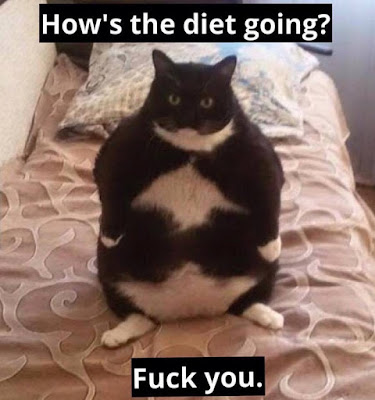 As for a general update, all I really wanted to say is that I've not been feeling well since I returned from Florida last Thursday. Whether it was because of too much Sun exposure, a bite by some insect or spider in that little trailer, stung by something in the surf, or whatever, I feel fatigued, a bit light-headed, headachy, and just run down. I also have a nagging sore throat.
I'm also in a depression this week -- miserable about my age, shape, and life. The Labor Day weekend was kind of crappy, especially yesterday in that I was, ultimately, totally alone. 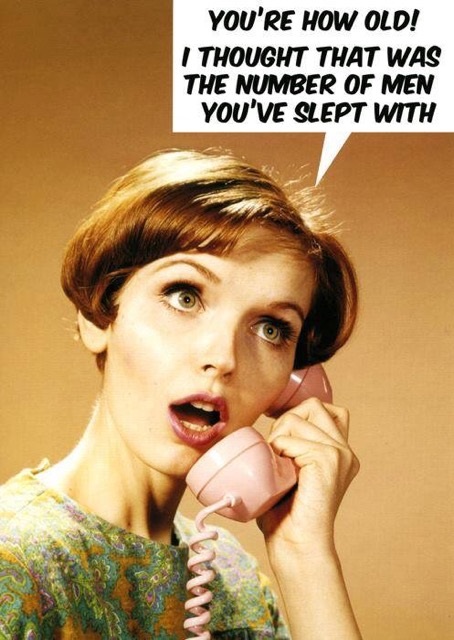 Work was OK today. I was going to go to the gym tonight, but given how I felt, combined with the twin facts that (1) the gym reopened after its weeklong shutdown so that it would likely be packed, and (2) the pool doesn't reopen until Thursday, I opted to skip it. I'm just ensconced in my air conditioned efficiency for the night.
OK, so the Paul Krugman column is on how Trump's trade war is badly hurting one part of his deranged base, namely, American farmers -- and how this in keeping with what any carnival-barking con artist does to his marks. 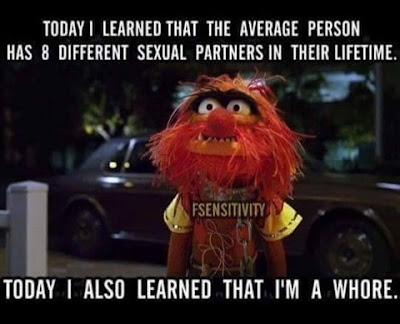 Haha
I should also note that Trump seems to be in some sort of syphilis-addled, dementia-fueled breakdown. 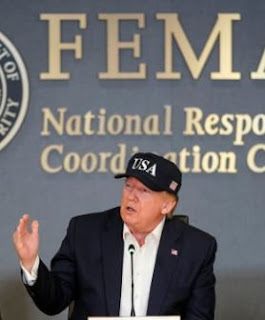 While binge-watching Fox News -- and in between endless golfing -- Trump rage tweeted 100+ times over the course of the Labor Day holiday weekend into early today. The tweets were the usual combo of incoherence, fascistic desires, haranguing about his limitless array of enemies, and general stark-raving lunacy.


Anyway, without further ado, here is the column reposted in full but without any embedded in-line links and interspersed with photos I took on my Labor Day walk …
The Frauding of America's Farmers
Trump's biggest supporters are his biggest victims.
Paul Krugman
Aug 29, 2019
Source here. 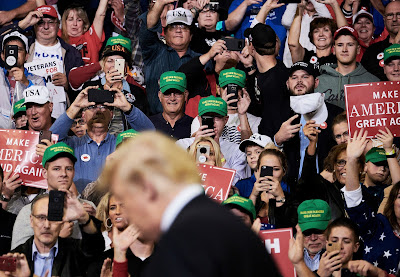 Donald Trump is unpopular, but he retains the loyalty of some important groups. Among the most loyal are America’s farmers, who are a tiny minority of the population but exert disproportionate political influence because of our electoral system, which gives 3.2 million Iowans as many senators as almost 40 million Californians. According to one recent poll, 71 percent of farmers approve of Trump's performance -- which is down somewhat from previous polling, but remains far above the national average. 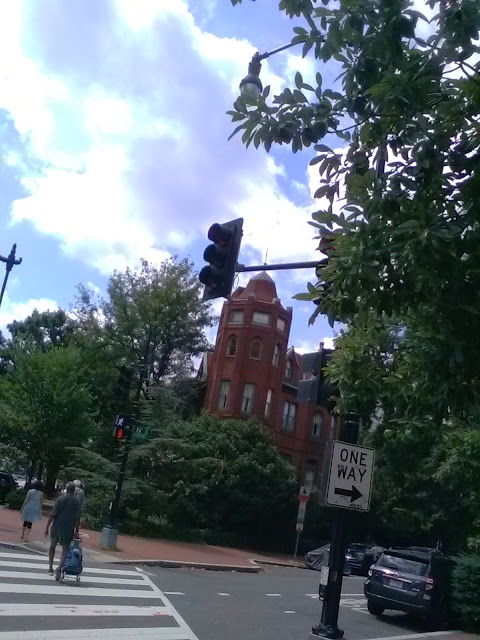 Yet farmers are hurting financially. Investors are worried about a possible recession for the economy as a whole, but the farm recession is already here, with falling incomes, rising delinquency rates and surging bankruptcies. And the farm economy’s troubles stem directly from Trump's policies. 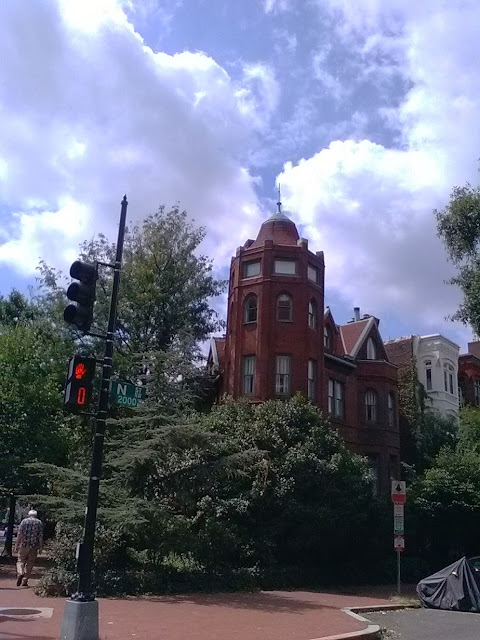 This apparent contradiction -- Trump is inflicting the greatest harm on the people who supported him most -- isn't an accident. Farmers' past support for Trump was predictable: The demography and culture of (white) rural America make it fertile ground for politicians promising to restore traditional society, and especially traditional racial hierarchy. But farmers' financial distress should also have been predictable: While rural America may dislike and distrust cosmopolitan elites, the U.S. farm economy is hugely dependent on global markets, and it has inevitably been a major victim of the Trumpian trade war. 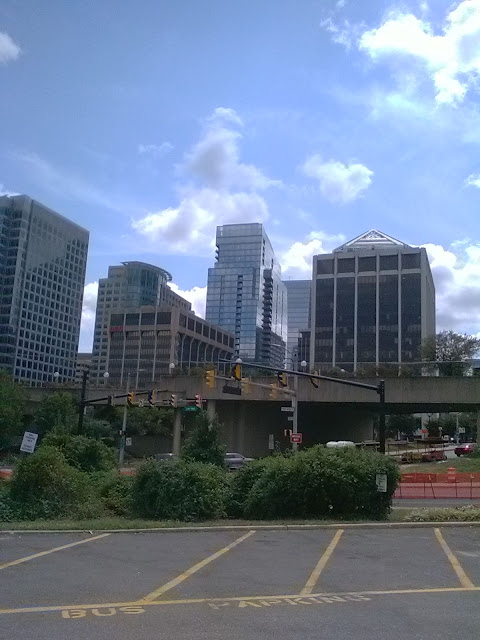 The questions, looking forward, are whether farmers understood what they were getting themselves into, whether they understand even now that their distress isn't likely to end anytime soon, and whether economic pain will shake their support for the man who's causing it. 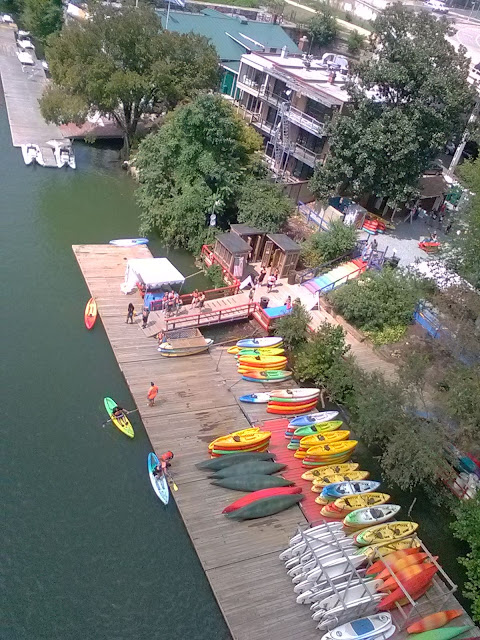 At one level, it's not hard to see why farmers supported Trump. Hostility to nonwhite immigrants was central to his campaign, and such hostility tends to be highest in places where there aren't actually many immigrants. So rural America, with its still tiny immigrant population, was a receptive audience for his fear-mongering. 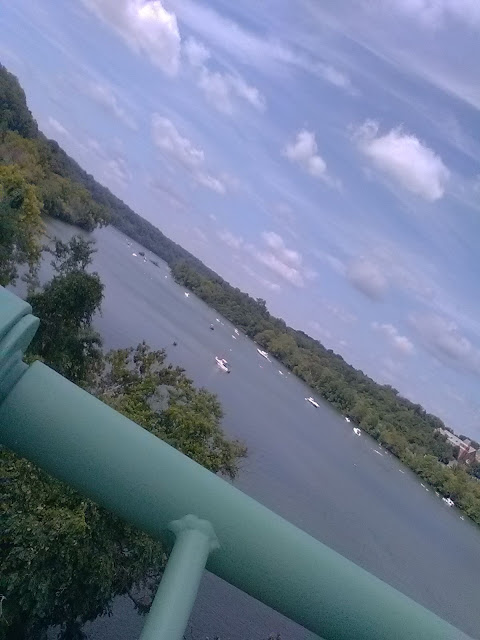 More generally, Making America Great Again -- which was basically about setting back the clock racially and culturally -- was a message that played well in places that still tend to think of themselves (and are told by politicians to think of themselves) as the Real America, as opposed to the big metropolitan areas where most Americans actually live. 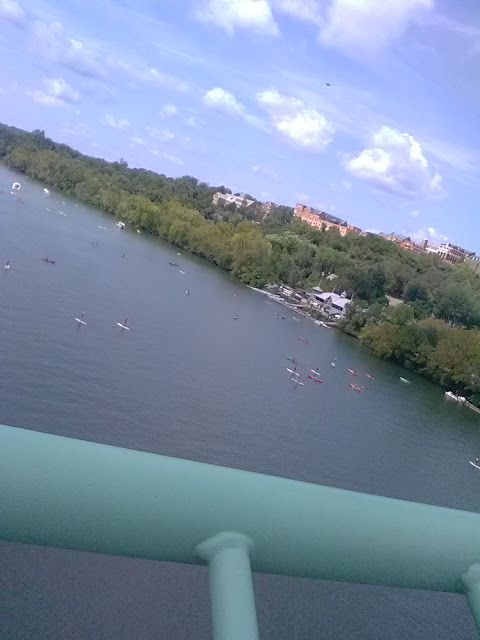 On the other hand, while farm country may be notably lacking in ethnic diversity and feels generally distrustful of globalists, the farm economy is in fact deeply integrated with and dependent on world markets. On the eve of Trump’s trade war, America exported 76 percent of its cotton production, 55 percent of its sorghum, half its soybeans, and 46 percent of its wheat. 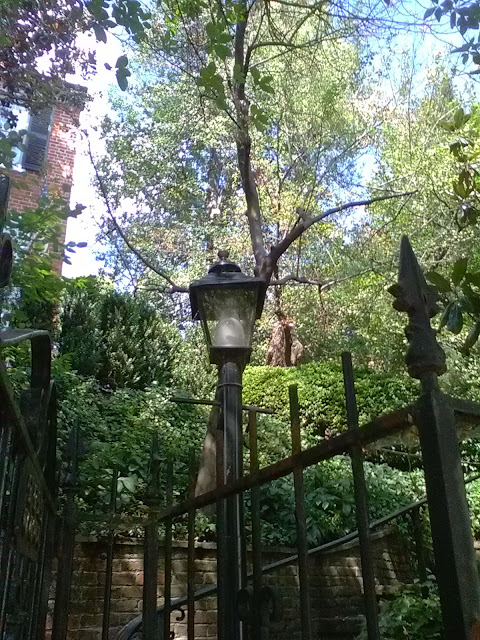 Overall, U.S. agricultural exports are almost 40 percent of the value of farm production, up from just 15 percent circa 1970. Globalization hurt some parts of U.S. manufacturing, with particularly harsh effects on some small industrial cities. But the rise of China and the growth of world trade have been nothing but good news for farmers. 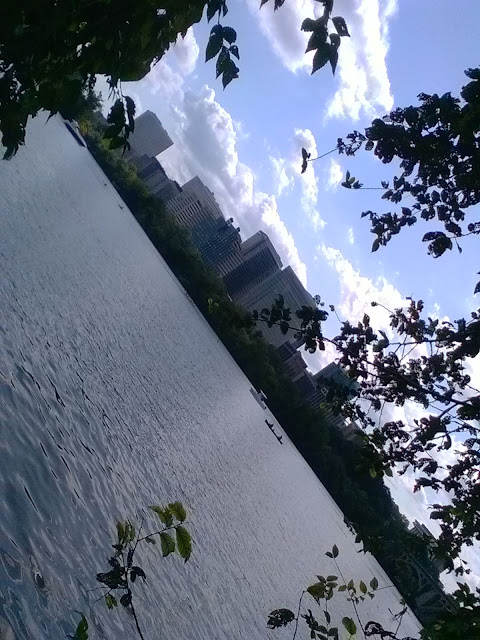 And here's the thing: It shouldn't have been hard to predict that Trumponomics would be bad for farmers. Trump's desire for a trade war was out in the open from the beginning; protectionism is right up there with racism and anti-environmentalism as one of his core values. And a trade war was bound to hurt farm exports. Did anyone really imagine that China, an economic superpower with its own fierce nationalism, wouldn’t retaliate against U.S. tariffs? 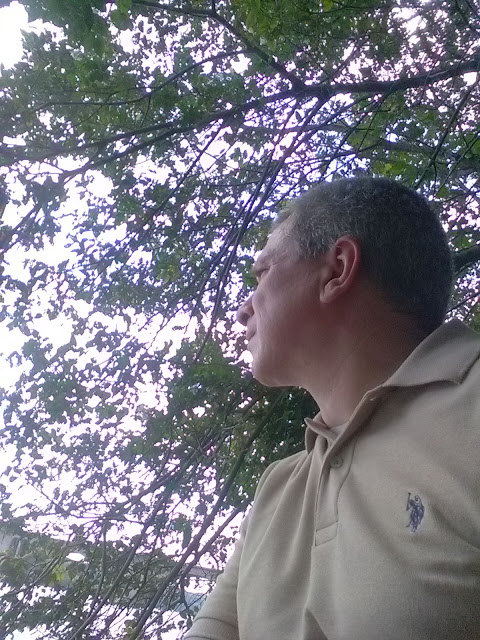 So what were farmers thinking? My guess is that they let the will to believe override their judgment. Trump seemed like their kind of guy. He certainly seemed to share their dislike for urban elites who, they imagined, looked down on people like them. So they convinced themselves that he knew what he was doing, that he would win his trade war and that they would be among the victors sharing the spoils. 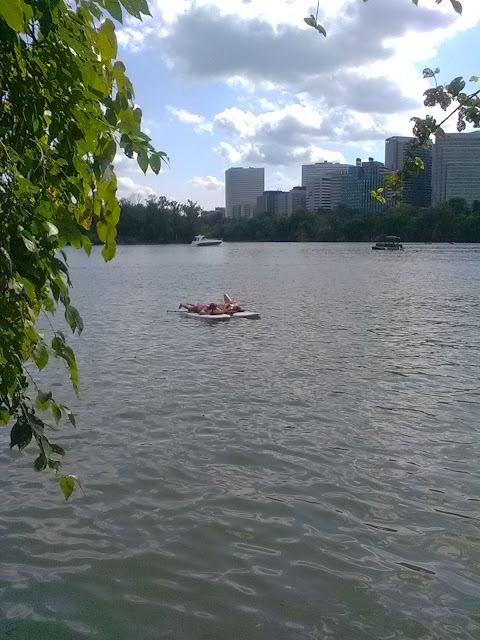 Even now many farmers seem to believe that the pain will end any day now, that Trump will soon announce a deal that restores all the old markets and more.
In short, farmers' support for Trump should be seen as a form of affinity fraud, in which people fall for a con man whom they imagine to be someone like them. 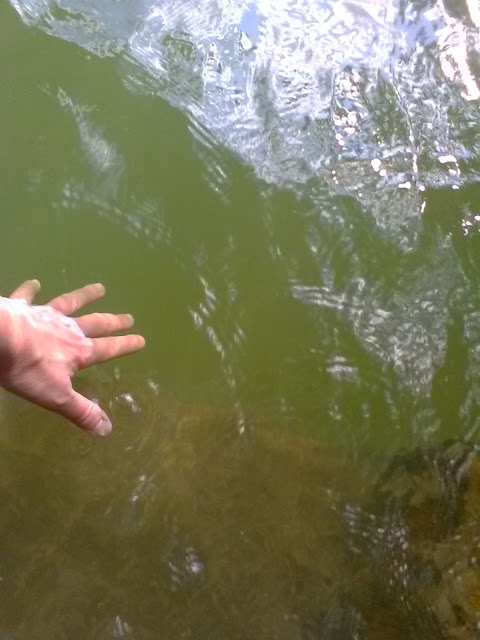 And as is often the case in such frauds, the con man and his associates actually have contempt for their marks.
Recently Sonny Perdue, the agriculture secretary, let the mask slip during a meeting with farmers complaining about their plight. "What do you call two farmers in a basement?" he snarked. "A whine cellar." 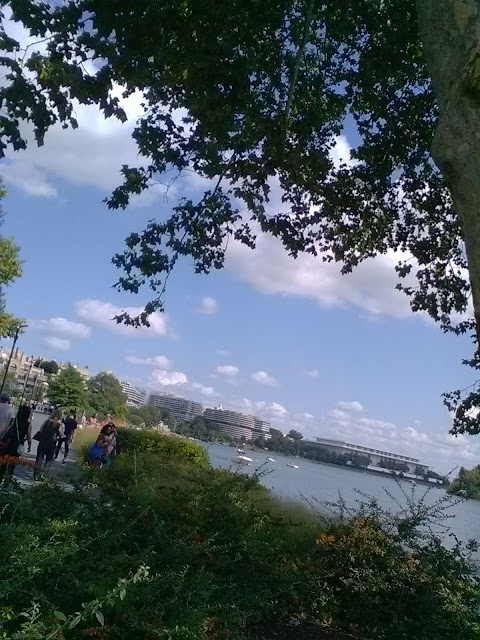 Trump's own remarks about trade with Japan were even more telling. According to a White House transcript, Trump complained that while Japan sends us millions of cars, "We send them wheat. Wheat. (Laughter.)" Do farmers realize that their president considers their livelihood a joke? 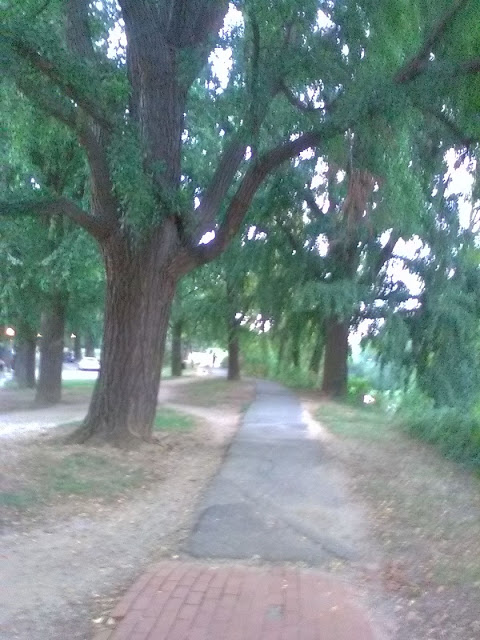 So what will happen as the trade war drags on? Don't expect farmers to suddenly exclaim en masse, "Hey, we’ve been had!" Real life doesn't work that way. But they have, in fact, been had, and they may finally be starting to realize it. 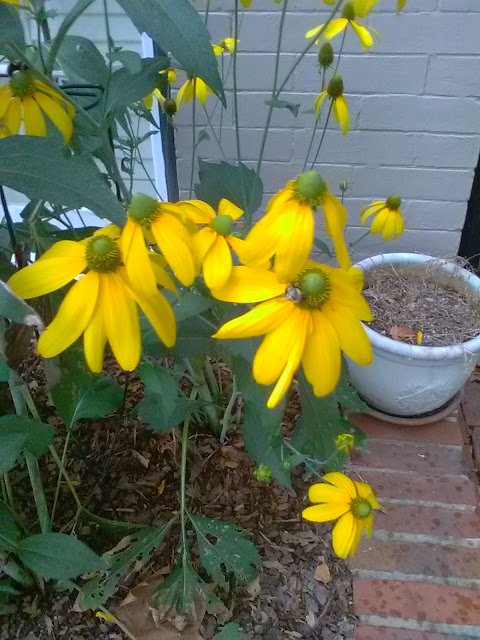 On the issue of fraud, Prof. Krugman had another op-ed about the complete and grotesque fraud of specific aspects of that abomination of a "tax cut" bill that the GOP frenetically rammed through on a party-line vote, in particular, the so-called "opportunity zones" that are just another tax dodge for the superrich. 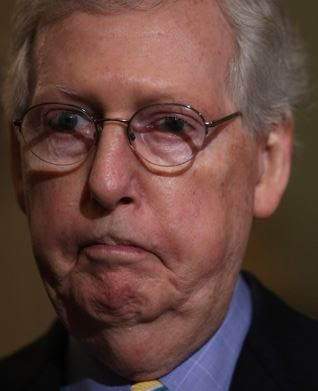 Such a tax dodge for kleptocrats is something that Moscow Mitch is A-OK with because he is a totally amoral, sclerotic POS. McConnell is the early 21st Century human embodiment of John C. Calhoun's Southern Nullification philosophy. For McConnell, it's always and only about making the world safe for Neo-Confederacy and oligarchy.


Ultimately, Donald Trump is an empty carnival sideshow. By contrast, Mitch McConnell is truly a malevolent force in the Cosmos.
Having said that, I have zero doubt he'll easily win reelection next year given the nature of his Kentucky electorate. 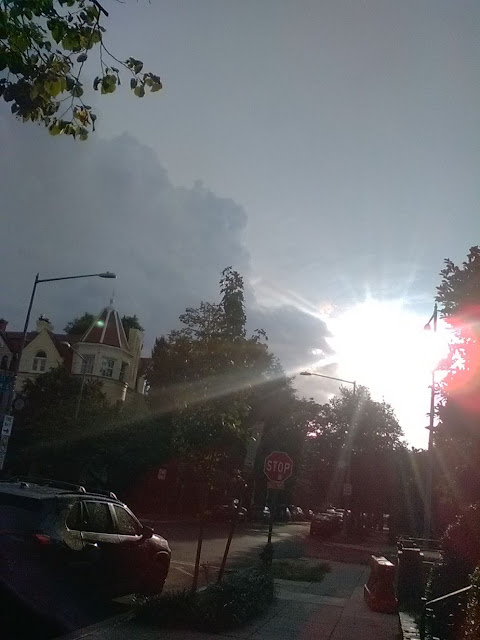 OK, that's all for this entry. I'd like to try to post a Hurricane Dorian update, although it is very late and I'm tired. I'm going to hold off an entry tomorrow. 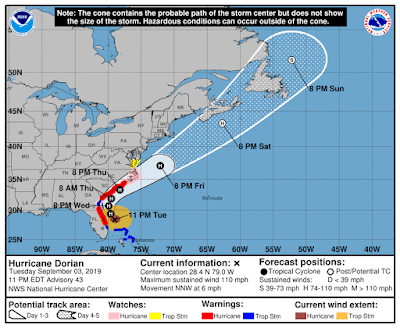 Bottom line, Dorian is a category 2 hurricane creeping up the Florida Atlantic coastline and, as anticipated, it is beginning to make the much-anticipated re-curvature that should spare the state the kind of destruction that occurred in the Bahamas. My dad should be alright in Flagler Beach. 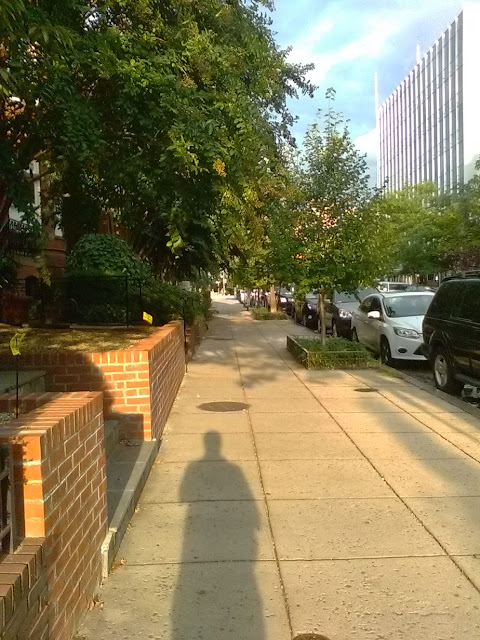 I'm going to try to go to the gym tomorrow night and Thursday night. I'm visiting my mother this weekend.
--Regulus
Posted by Regulus at 1:10 AM