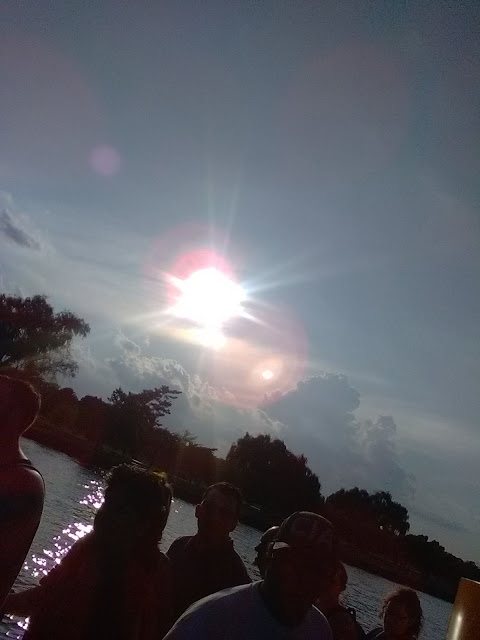 
This entry is a reposting of a George F. Will op-ed column that appeared in the Washington Post about a week ago (August 5th). The pictures in this entry were taken last Saturday (August 3rd) both by myself and my friend, Mike G., who came into D.C. that day to visit me. 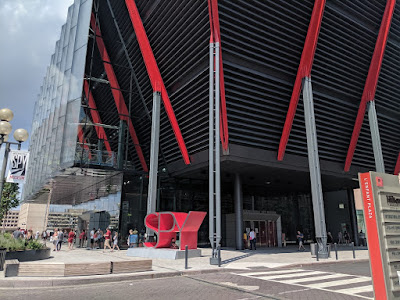 On that day, we went to the District Wharf in SW Washington, D.C., where we stopped at Kirwan's and then Cantina Bambina before catching, last minute, a conveniently-timed early evening water-taxi to Georgetown (Washington Harbour) on a route that took us around East Potomac Park (Hains Point). 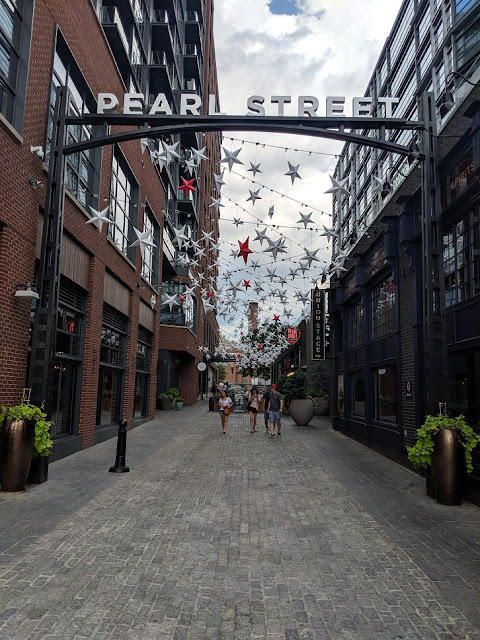 Once there, we stopped at the Tony & Joe's outdoor bar. Oh, yes, of note, we had parked near Foggy Bottom earlier in the day -- and rode the Metro to L'Enfant Plaza on the idea that we would end up in Georgetown.
Except for the lead image, I'm not captioning the pictures in this entry. If you click on any image and download it, you can get the time and place info. The images with "mg" appended to the file name were taken by Mike. 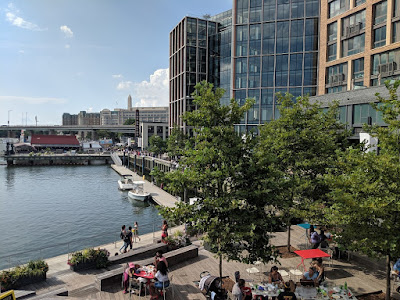 Of note, I then rode the same company water taxi the following day (Sunday, Aug 4th) -- but from Georgetown to the District Wharf. And I'm planning to post another entry featuring those pics. I should also note that today, August 11th, I rode another water taxi (different company, I think) from Old Town Alexandria to Georgetown. 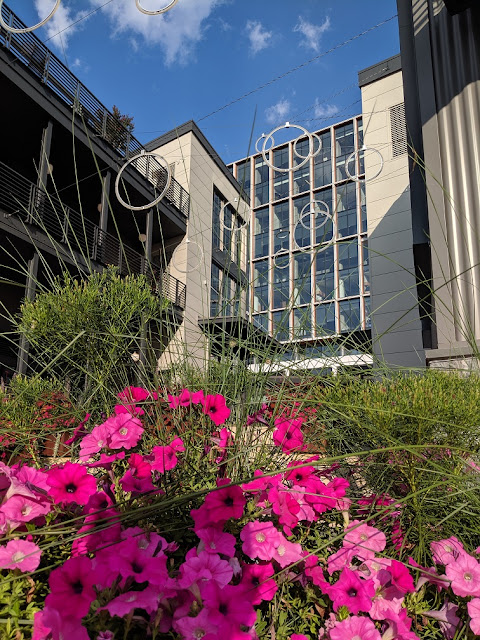 Anyway, without further ado …
Trump doesn't just pollute the social environment with hate. He is the environment.
By George F. Will
The Washington Post
August 5, 2019 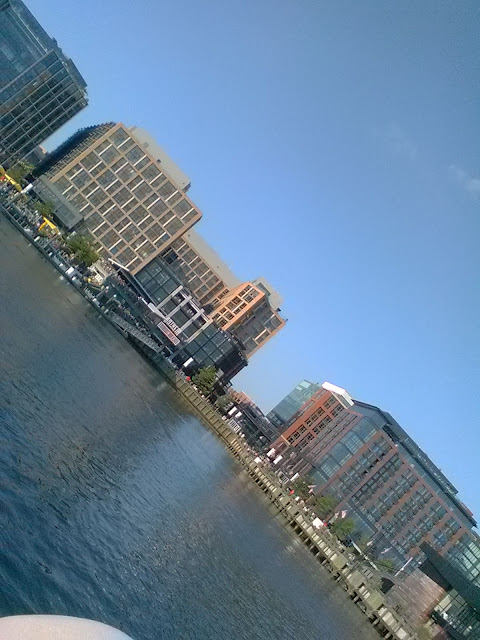 "It is remarkable by how much a pinch of malice enhances the penetrating power of an idea or an opinion. Our ears, it seems, are wonderfully attuned to sneers and evil reports about our fellow men."
-- Eric Hoffer 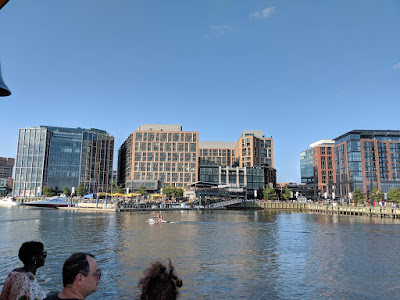 It is 1,218 miles from the Aaron Bessant Park Amphitheater in Panama City Beach, Fla., to the Walmart at 7101 Gateway Blvd. W in El Paso. It was in that park that President Trump, on May 8, was amused by the answer someone in his audience shouted in response to his shouted question about would-be immigrants at the southern border. 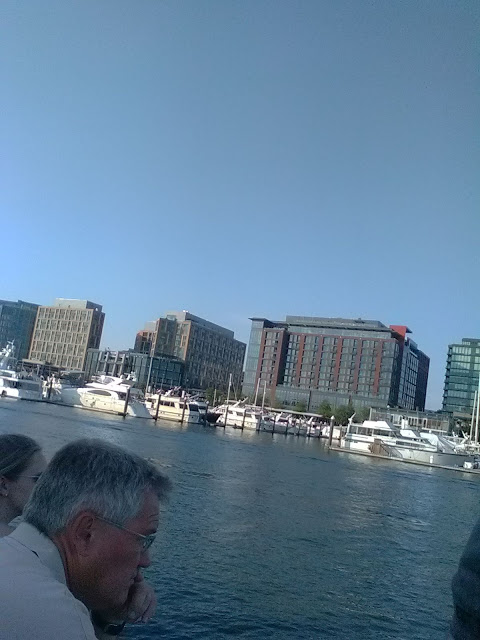 His question was, "How do you stop these people?" The shouted answer was, "Shoot them." Trump, with a grade schooler’s delight in naughtiness, smiled and replied, "Only in the Panhandle you can get away with that statement." But does what happens in the Panhandle stay there? 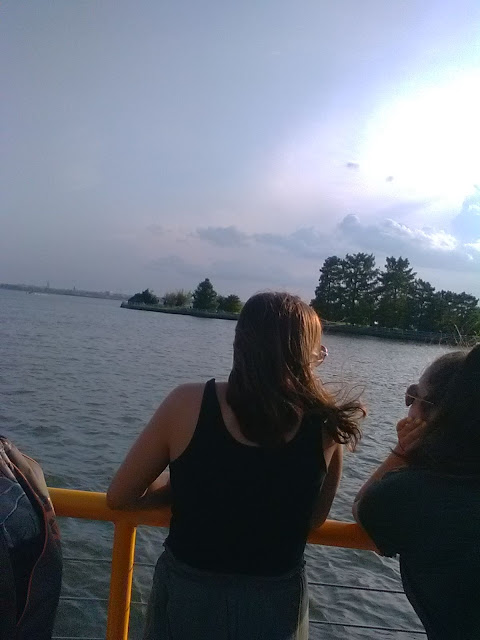 When mass shootings occur, the nation quickly returns to worthy debates about three questions. One is whether gun-control measures can be both constitutional and effective in making mass shootings less likely. A second debate concerns the ability and propriety of law enforcement (in which private citizens properly have a collaborative role) attempts to identify individuals, usually young males, who might violently act out their inner turmoil. 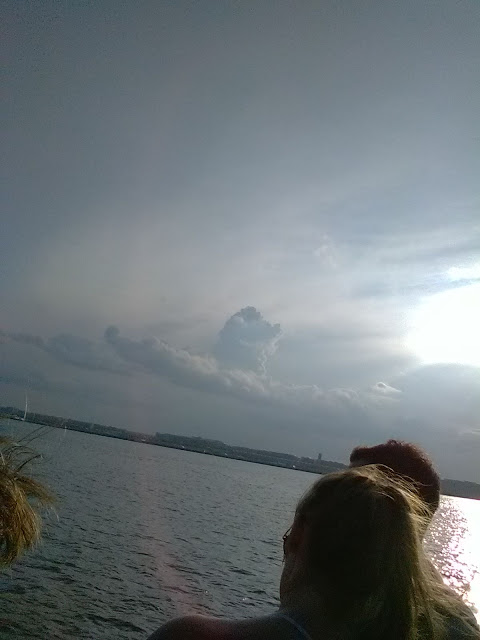 The third question, which is braided with the second, acquires special urgency because of the nature of today’s most prominent American: Can we locate causes of violence in promptings from the social atmosphere?
To the first question, part of the answer is that a reasonable reading of the Supreme Court's 2008 Heller decision, which affirmed that the Second Amendment guarantees the individual a right to bear arms, permits many measures regulating certain kinds of weapons and ammunition magazines. The second question must be informed by the third -- and by science. 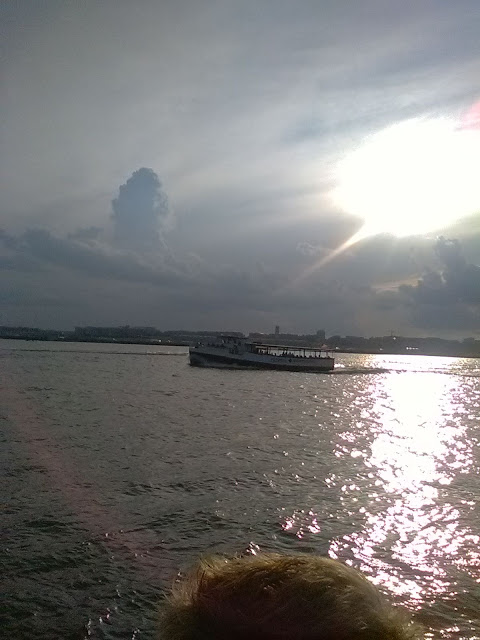 James Q. Wilson (1931-2012), the most accomplished social scientist of his time, noted that genetics and neuroscience suggest that self-control is more attenuated in men, and especially in young men, than in women. The part of the brain that stimulates anger and aggression is larger in men, and the part that restrains anger is smaller in men. 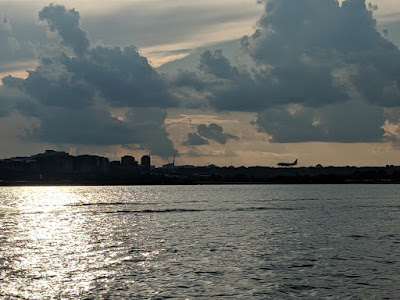 Wilson emphasized that this does not mean that violent men are absolved of blame. It does mean that as biology and the social environment interact, this environment must be treated with care by prominent people.
It is not implausible to believe that Trump's years of sulfurous rhetoric -- never mind his Monday-morning reading, seemingly for the first time, of words the teleprompter told him to recite — can provoke behaviors from susceptible individuals, such as the alleged El Paso shooter. 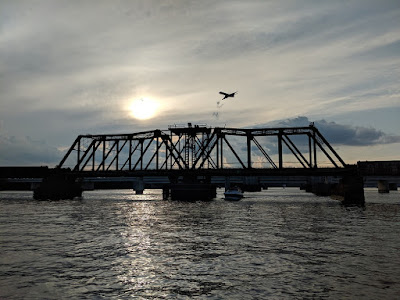 If so, those who marked ballots for Trump -- we have had quite enough exculpatory sociology about the material deprivations and status anxieties of the white working class -- should have second or perhaps first thoughts. His Republican groupies, meanwhile, are complicit. 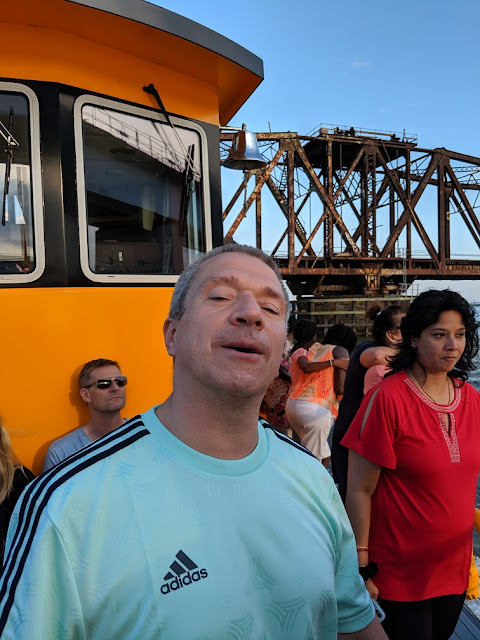 The grotesquely swollen place of the presidency in governance (now that governance has become, for Congress, merely a spectator sport) and society has been made possible by journalism that is mesmerized by, and easily manipulated by, presidents -- especially the current one, whose every bleat becomes an obsession.
This president is not just one prompting from the social environment; he, in his ubiquity, thoroughly colors this environment, which becomes simultaneously more coarse and less shocking by the day. 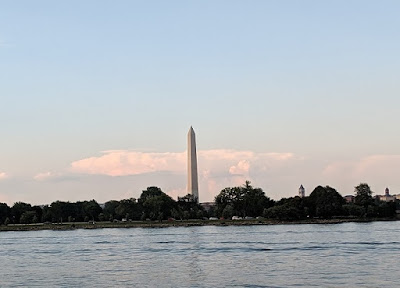 Eric Hoffer (circa 1898-1983), the longshoreman philosopher, said that "rudeness is the weak man’s imitation of strength." This anticipated the essential fact about the 45th president -- Trump's fascination with what he utterly lacks and unconvincingly emulates: strength. Hence his admiration for foreign despots and his infantile delight in his own bad manners. 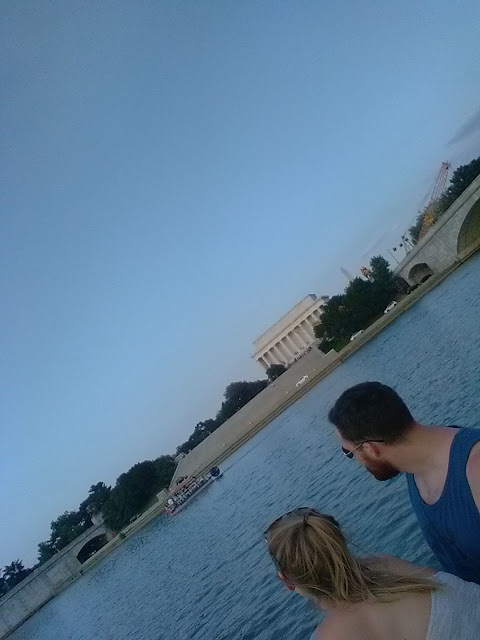 It is one thing to have a president who, drawing upon his repertoire of playground insults, calls his alleged porn-star mistress "Horseface." Polls indicate that approximately a third of Americans, disproportionately including religiously devout worriers about the coarsening of America's culture, are more than merely content with this. 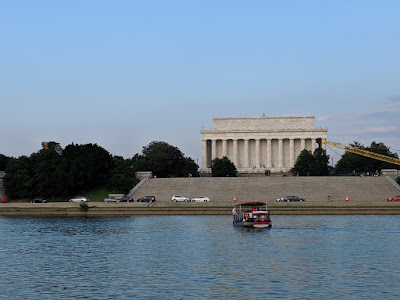 It is quite another thing to have a president who does not merely pollute the social atmosphere with invectives directed at various disfavored minorities; he uses his inflated office not just to shape this atmosphere but to be this atmosphere. 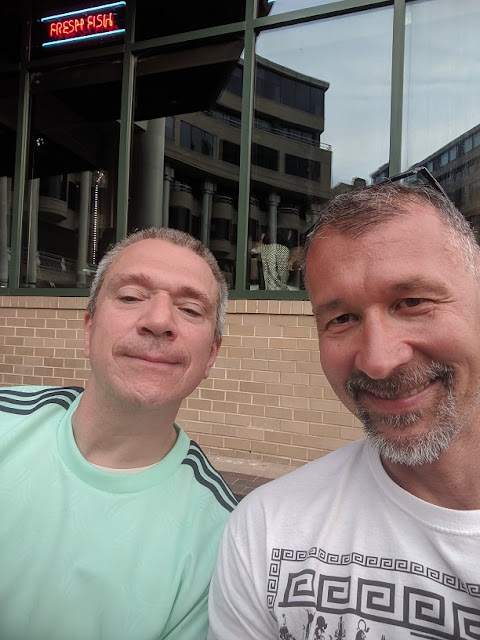 When Gerald Ford became president after Richard M. Nixon's resignation, he told the nation: "Our long national nightmare is over." Today's long -- and perhaps occasionally lethal -- national embarrassment will continue at least until Jan. 20, 2021. If it continues longer, this will be more than an embarrassment to the nation, this will be an indictment of it. 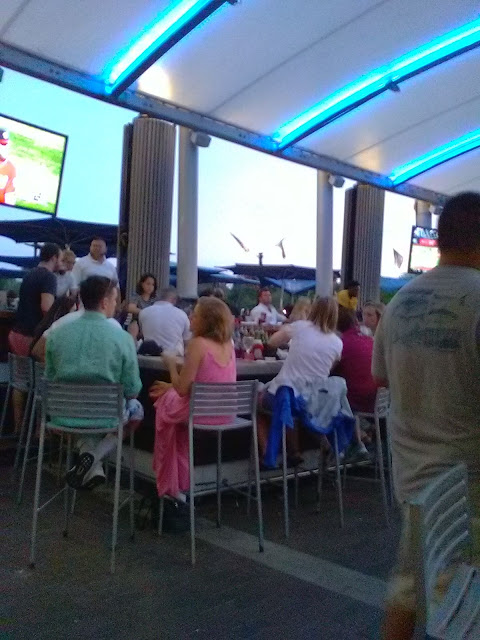 It's such a disturbingly weird world in which we are living that George Will has become one of my fixed stars of wisdom. But here we are in that sort of Twilight Zone (to include the awesome 1980s series ones). 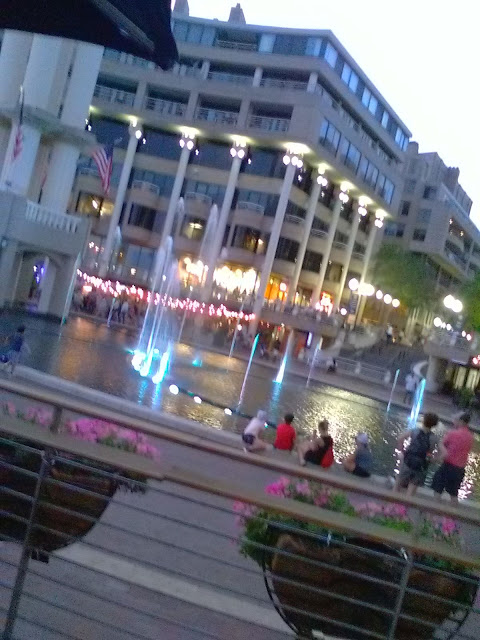 OK, that's all for now. It's Sunday night, and I'm headin' to bed now. I'll try to post another entry tomorrow night, in particular another column (a Ross Douthat one) featuring my second batch of Potomac River water taxi pics.
--Regulus
Posted by Regulus at 11:50 PM