The French Bulldog Puppy and the Beautiful Monarch Butterfly -OR- Even In Hot, Wet, and Ugly TrumpWorld, Joy and Beauty Are Revealed 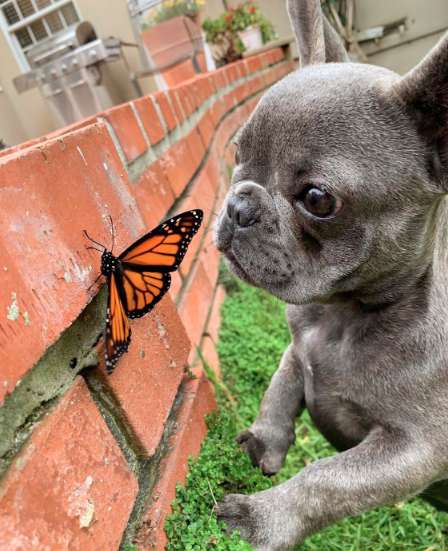 Mochi the French bulldog ponders a Monarch butterfly, San Diego, Calif., June 2019
This entry contains a set of images, among others, from this article in The Dodo (link embedded): This Little Dog Befriended A Butterfly, And For A Moment The World Was Perfect
It's about an adorable and rambunctious little French bulldog, Mochi belonging to Rylee Boland, who upon encountering a Monarch butterfly in the backyard of her mommy's home in the San Diego area last month, intuitively knew to be perfectly gentle with it -- until it fluttered away.
Ms. Boland's Instagram main page dedicated to Mochi is here. 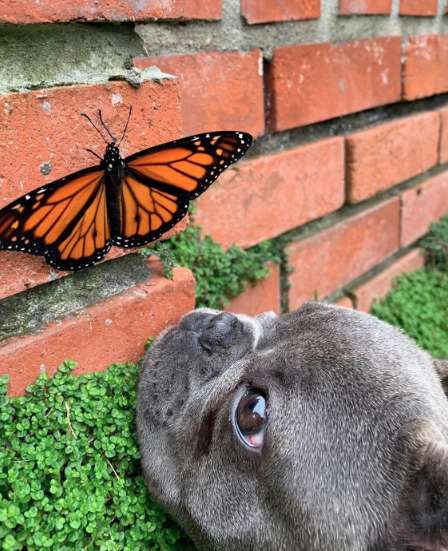 OK, I'm going to try to post an entry tonight.
I started to last night after work and the gym, but I just wasn't feeling up to it and sort of conked out. Actually, what happened is that I got back from the gym -- second night in a row and a more-or-less complete workout -- and was enjoying my late-night MeTV lineup with the fucking digital antenna reception crapped out into a farcical, digital smear. 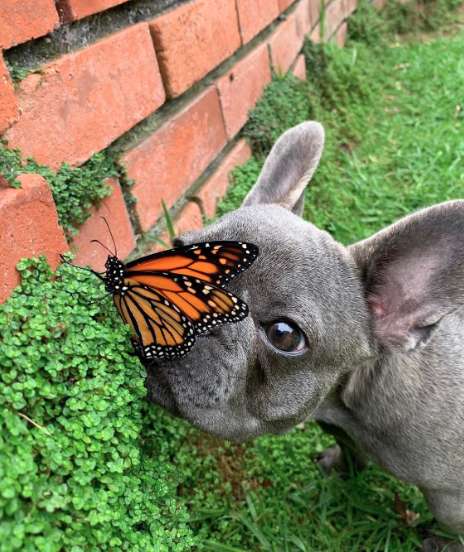 To be clear, my TV had been coming in beautifully the past five days or so -- ever since, oddly enough, I got my new used, well-functioning window air-conditioner -- to include MeTV reception. (Some of the other channels come in fine but MeTV, which in D.C. is associated with WTTG as one of its digital sub-channels, or whatever you call it.) 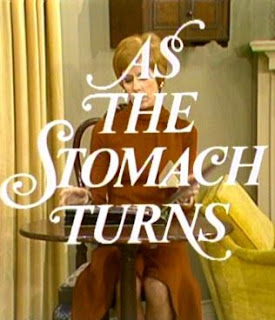 And, OF COURSE, it happened during an episode of The Carol Burnett Show, namely, the one first aired Jan 4, 1971 with guests Art Carney and Pat Carroll, specifically, right as a frickin' HILARIOUS skit of "As the Stomach Turns" came on (one not available on YouTube or other online streaming video sites but instead only by purchase).

Of note, Harvey Korman at that time did a flamboyantly gay character named Gaylord in fictitious Canoga Falls. 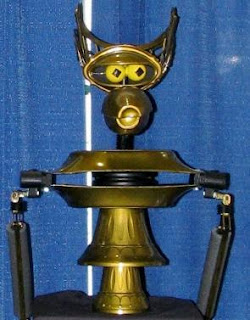 Naturally, GOD, or whatever runs this particularly obnoxious Universe in the multiverse / Omniverse, was DELIGHTED with Itself (making something gratuitously go wrong). Disgusted and worn out, not to mention finding the dinner I made vaguely distasteful, I went to bed -- and had a night of characteristically wild and chaotic dreams.


Anyway, I'm home tonight -- no gym nor anything else -- because I have to be up very early tomorrow in order to cover a meeting as a notetaker starting at 8:30 a.m. that runs all workday and also Friday morning. I'm also flat broke until my Friday paycheck. 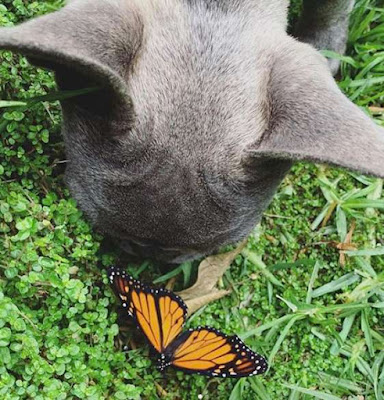 Right now, as I write this, I'm watching a Green Acres rerun on MeTV, and the digital reception is so-so. It usually entails moving the television and digital antenna. I actually think it's related to the way the channel is broadcast and not my crummy little antenna or placement of my apartment in this building.
Turning to the weather hot and wet …

Sterling (LWX) NWS radar in standard composite mode looped 5:09 - 5:37 p.m. EDT July 17, 2019
A line of drenching thunderstorms swept across the Metro D.C. and Baltimore areas earlier tonight including here in the District following an nasty hot and humid day with temps in the 95F to 97F range and dew points occasionally spiking as high as 77F. 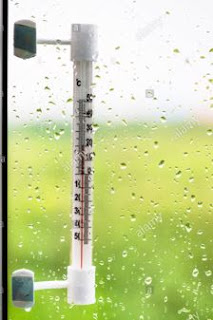 
As it is mid-July, none of these high temperatures were daily record highs.
******* 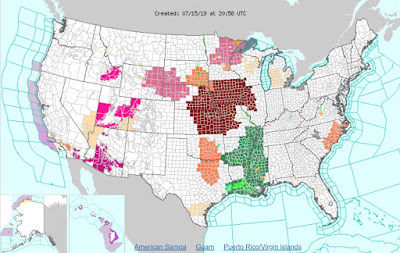 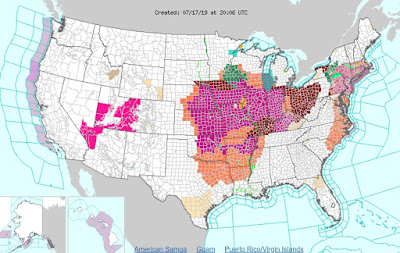 
Here is one of three CWG entries I'd like to post in this entry:
Widespread, oppressive and dangerous heat to roast much of the U.S. through the weekend
About the heat and wet, the sprawling heatwave with high humidity covering the eastern half of the Lower 48 along with torrential thunderstorm rains is resulting in the strange, climate-change-induced combo of NWS combo products in effect sometimes simultaneously in the same place, namely, flash flood warnings and excessive heat warnings. 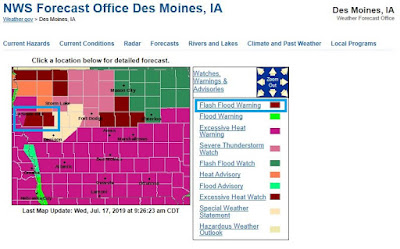 The Des Moines NWSFO (DMX) county warning area advisories as of 9:26 a.m. CDT July 17, 2019
The excessive heat watches are in the maroon while flash flood warnings are in dark red. The RGB colors for the two are so close ((128,0,0) versus (139,0,0) ) that I can't tell them apart. In clicking on the point-grid forecasts, it turned out that only the region in the blue box was in a flash flood warning. (In no case here were the two in effect at the same time. Regardless, the map can only show one color at a time and the flash flood warning takes priority.) 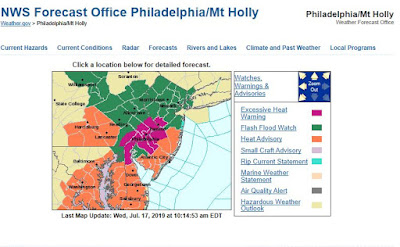 Mt. Holly / Philadelphia county warning area (CWA) advisories as of 10:14 a.m. EDT July 17, 2019
In this case, there were flash flood watches and excessive heat warnings in effect simultaneously -- but the latter takes precedence over the former. Also, the Philadelphia area uses a different criteria for excessive heat watches and excessive heat warnings than the rest of the Mid-Atlantic. (Of note, I think the same color is also used for a snow squall warning. Now there are two NWS weather products that could NEVER be in effect simultaneously or really even in the same area.)
******* 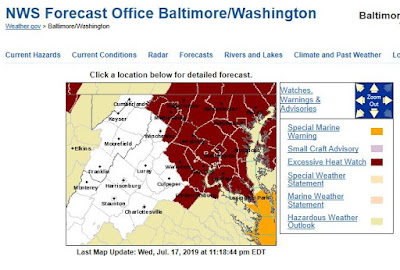 Sterling (LWX) CWA weather advisories updated 11:18 p.m. EDT July 17, 2019
This is a bit unusual to have an excessive heat watch for our CWA. More typically, we have a heat advisory that gets upgraded to an excessive heat warning for the urban heat islands. This is because the threshold criteria are so high for our CWA -- and Sterling is very legalistic on the matter.
******* 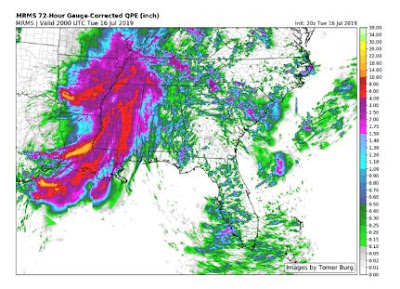 72-hour precipitation rain totals for the SECONUS through 20 UTC 16 July 2019
Deluged by Barry, Arkansas becomes fifth state to set tropical storm rainfall record in past two years
This references what was briefly Hurricane Barry, but was in fact a sort of hybrid semi-tropical system that developed from a circulation over land -- with lots of dry-air entrainment -- that moved over the northern Gulf and turned into a disjointed that the NHC insisted was a tropical storm and then, just before it moved ashore on the Louisiana coastline well west of New Orleans, briefly a hurricane. (That was more to get people's attention, I think, then the fact it was actually a bona fide tropical cyclone.)
*******


And we'll end with a third and now-usual entry in this globally-warming world: 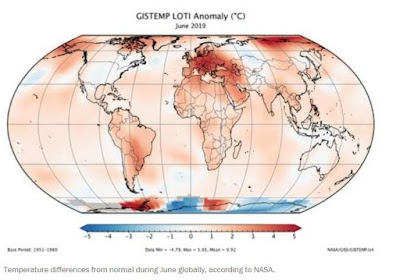 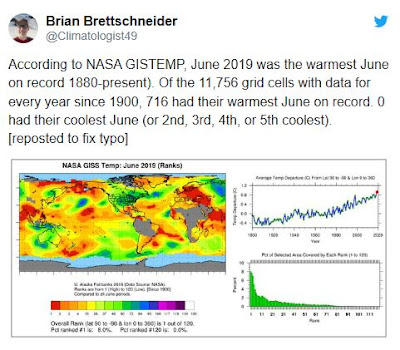 The month was punctuated by a severe heat wave that struck Western Europe in particular during the last week, with numerous all-time-hottest-temperature records falling in countries with centuries-old data sets.
Notably, 13 locations in France surpassed their highest temperature ever recorded. The heat wave’s highest temperature of 114.6 degrees Fahrenheit (45.9 Celsius), posted in Gallargues-le-Montueux, was 3.2 degrees above the old record, set during an infamous heat wave in July and August 2003.
Even the dumbest tool of a Teabagger has gotten flummoxed trying to deny the obvious. They don't even bother posting comments anymore to online articles.
Not to worry, though, because the Trump MAGA crowd are too busy whacking off, whether secretly or out-and-proudly …

… to this degenerate's latest, all-week-news-cycle-dominating "Go back to your country" racist tweet outbursts against four female Democratic House members -- three of whom were born in the U.S. and all of whom are non-white, i.e., "of color" -- while Dems ponder the dystopian question of how much this will help Trump in the Electoral College (that he loses the popular vote again is a given) and whether they are simply playing into his hand.

Speaking of Trump's grotesque base, he had another one of his "Hillbilly Nuremberg" hatefest rallies tonight.


There are going to be hundreds of those between now and the election -- and it's quite possible (maybe even likely) that Trump will lose by 6 million votes and still win that abomination of the Electoral College. 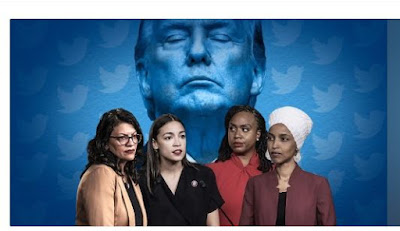 About that, I had planned an entry on it, but I don't really feel like getting into it and fouling up another goddamn blog entry with his poison and instead feature a picture that reminds us this world can be wonderful … 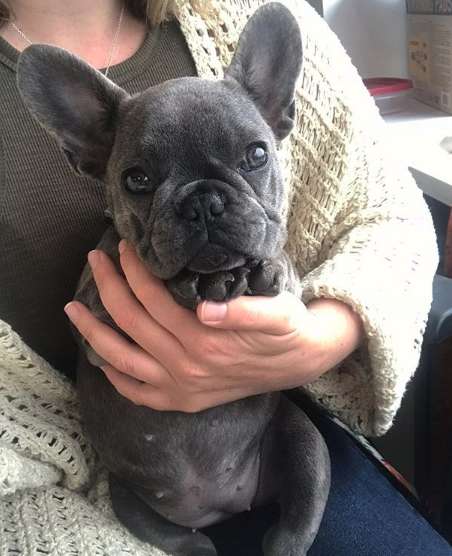 OK, that's all for now. My next entry will not be until the weekend. By the way, while finishing up this entry, I watched The (New) Twilight Zone episode "The Road Less Traveled." I wish Ray could have seen this before he died.