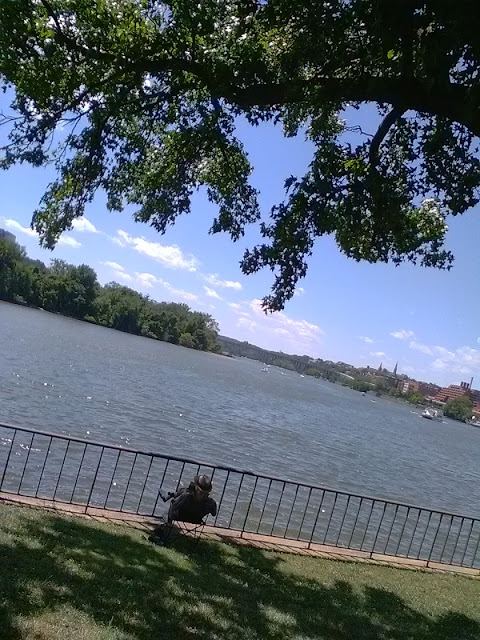 A man seated by the Potomac River's edge, near the Watergate, Washington, D.C., 2:35 p.m. June 30, 2019
The pictures in this entry were taken (by me) down by the Potomac Riverfront -- mostly near the Watergate complex -- on Sunday. The weather was very nice that day with dazzling sunshine in a clean, clear blue sky. Temps were around 83F and there was a gusty northwesterly breeze, although it still felt quite hot in the sunlight. In fact, I ended up getting a tan -- well, I basically just turn reddish rather than bronzed thanks to my Polish heritage overwhelming the Italian part. 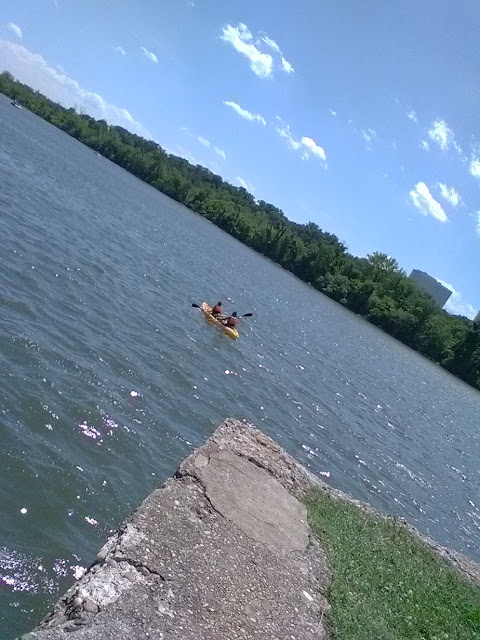 Two young ladies kayaking on the Potomac River with Theodore Roosevelt Island in the background, Washington, D.C., 2:44 p.m. June 30, 2019
I should note that the Potomac River -- long filthy with sewage overflow from D.C.'s ancient sewer system and, farther downriver, nitrate and phosphate pollution runoff plus all manner garbage -- has been looking SLIGHTLY cleaner of late, perhaps because DC Water's Anacostia River Tunnel Project is beginning to show positive results.
*******


Sorry for lack of postings the past few days.
I would have posted an entry Monday night but I had to finish one of the two remaining financial monitoring reports for work (the ones I'm behind on by, like, two months). As for last night, I went to a post-work happy hour that sort of morphed into my usual freelance night -- starting at the District Wharf in SW D.C. and then back home, dodging on the Metro an evening thunderstorm's terrific deluge. 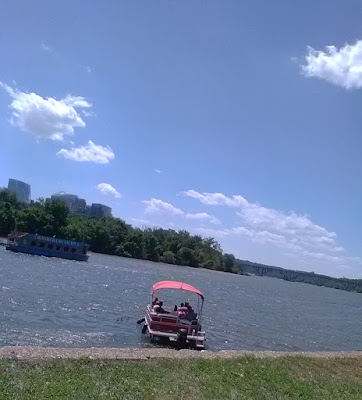 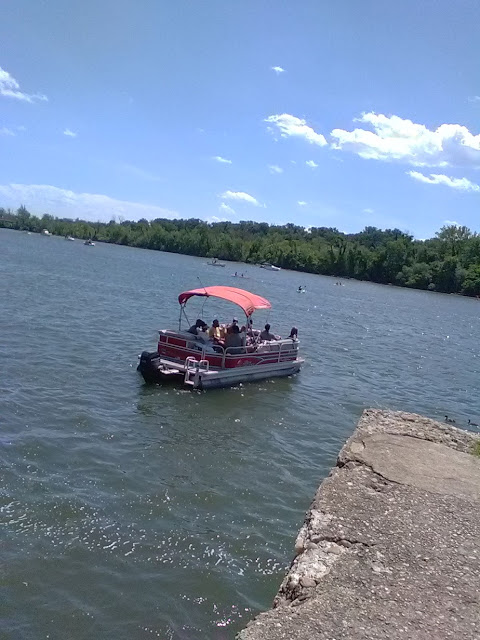 People on a boat at the edge of the Potomac River near the Watergate, Washington, D.C., 2:52 p.m. June 30, 2019
There was a family of ducks (visible just above the edge of the concrete ledge) following the boat as it drifting lazily with its motor off. I can't think of what type of boat is this.
*******


For tonight, and despite the fact that tomorrow is the July 4th holiday, I'm planning on going to the gym and then posting a new entry once I'm home. I can write again about the big historical mistake of the United States and how we must maintain the fiction that we are the Best-of-All-Possible-Countries in an otherwise shitty world. 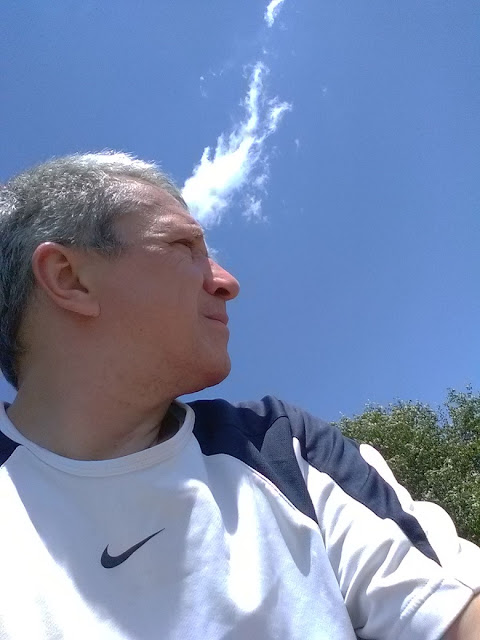 Yours truly along the Potomac River near the Watergate, Washington, D.C., 2:53 p.m. June 30, 2019
Of note, I had stopped at the liquor store in the sunken interior of the Watergate complex and got a vodka and Seltzer water, which I mixed with the Gatorade I had. There was also a young guy named Andrew -- a tax lawyer, it turns out-- who was finishing in the river. The Indian guy in the liquor store didn't seem to like me. Oh, well.
Later on, I went to Tony & Joe's at Washington Harbour and then took a cab home. I was asleep by 6 p.m. and slept for much of the next 15 hours.
*******


I don't have any particular plans tomorrow except to dodge the grotesque banana-republic-style Fourth of July celebration to his perverted narcissistic yet super-fragile ego that Trump has created by hijacking the usual National Capital celebration and turning it into one of his obscene MAGA rallies -- this one with tanks and fighter jets. 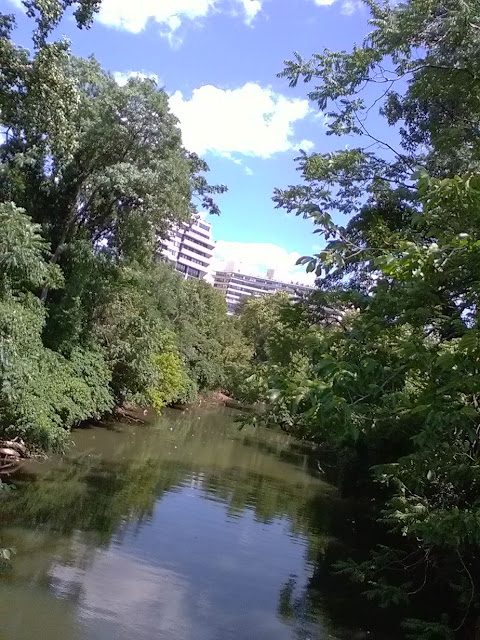 
It's the perfect storm of Trump's late-stage syphilis and early-stage dementia with the cult that is the GOP. And speaking of storms, I hope to God we have severe weather tomorrow night. 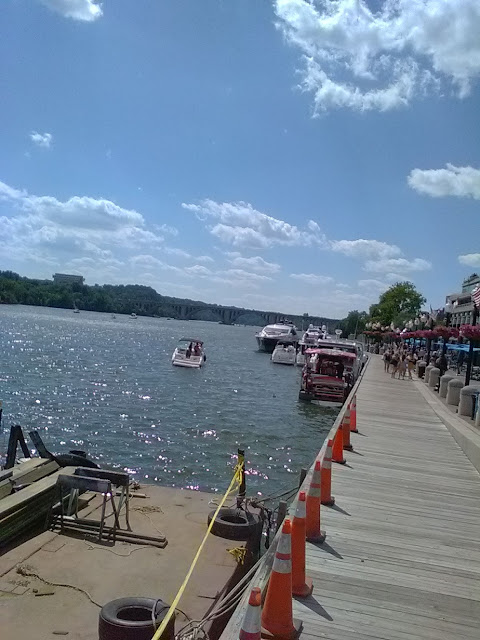 Yachts docked along the Potomac Riverfront in Georgetown, Washington, D.C., 3:37 p.m. June 30, 2019
As I've more than once previously mentioned, the young people on these yachts drinking, smoking cigars, or even barbecuing mostly just rent them. People who actually own yachts typically don't feel compelled to make public spectacles of themselves in front of large crowds.
*******


As for tanks, just get one of those World War II era-style inflatable tanks that was outside the Spy Museum last month and put it on the steps of the Lincoln Memorial. Trump's solipsistic mind won't notice the difference. (That's a Fox News link so just double click on it to get around the Roger Ailes paranoia barrier.) 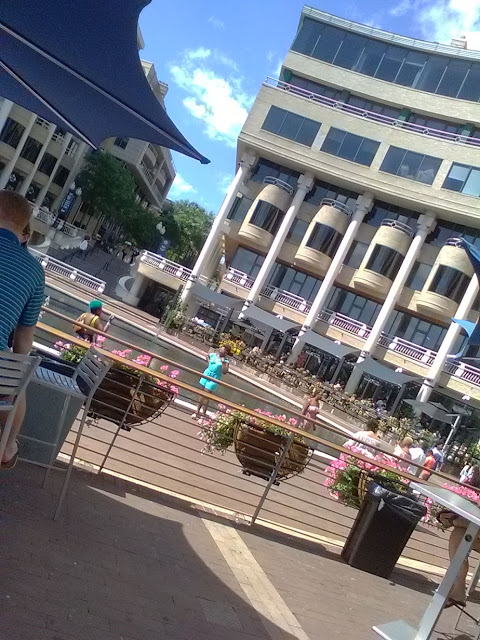