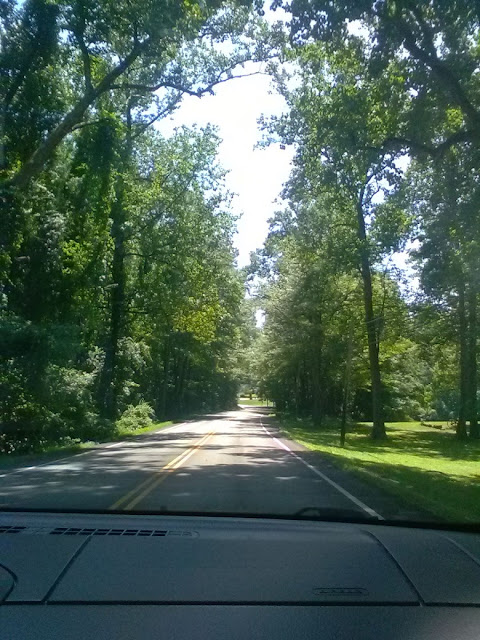 We were heading to Annapolis -- specifically, to Mike's Crab House on the South River tributary of the Chesapeake Bay on a sort of back route way involving these roads, Crownsville Road, Harry S. Truman Parkway, and Riva Road.
******* 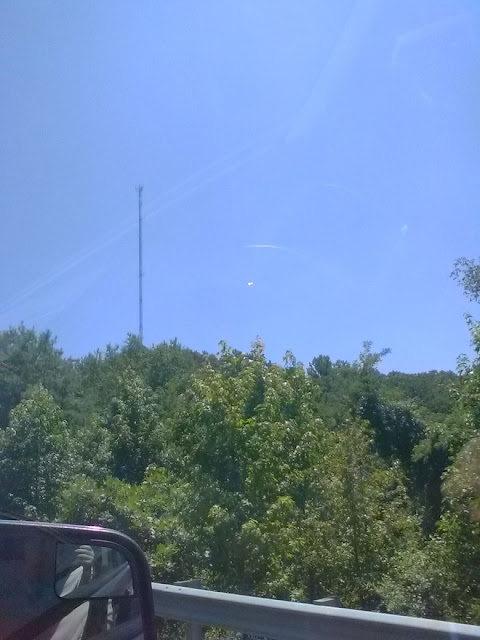 View along Harry S. Truman Parkway, Annapolis, Md., 1:31 p.m. July 13, 2019
This particular transmitter tower -- roughly 600 feet high -- is located in Broad Creek Park behind Harry S. Truman Parkway and an Anne Arundel County Parks & Recreation facility. It should not be confused with the now-shrunken NSS Annapolis array.
The weather on Saturday was about as cloudlessly sunny as it could possibly be -- I saw literally one small fair-weather cumulus cloud the entire day -- with summery warm temps reaching around 90F and dew points between 60F and 65F.
******* 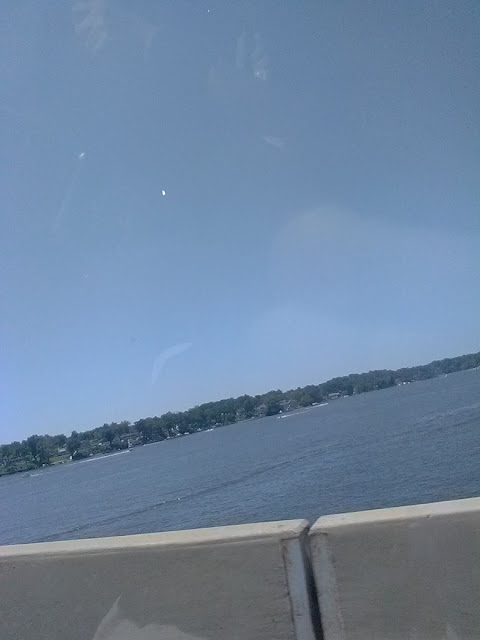 
As an update this late Monday night, I'm home now just watching my late night MeTV lineup.
The Carol Burnett Show -- originally aired Dec 14, 1970 -- guest starred Steve Lawrence, Durward Kirby, and Julie Bond. Perry Mason is airing "The Case of the Thermal Thief" and guest stars Kathie Browne, who appeared in four Perry Mason episodes. This is one of those episodes in which Raymond Burr is absent and there is a fill-in guest star attorney (played by Barry Sullivan). 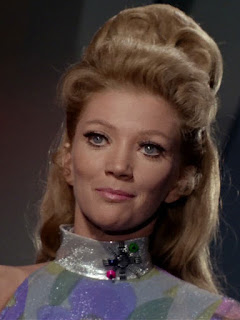 As for Kathie Browne, she was one of those seemingly omnipresent actresses of the 1960s (sort of like John Davidson in the 1970s).

Blonde with big, round, innocent-looking eyes, she guest starred in the Star Trek: TOS episode "Wink of an Eye" as Deela (pictured at left). She was married to Darren McGavin until her death in April 2003 at age 72.


Darren McGavin, of course, starred on Kolchak: The Night Stalker -- and played the father of Ralphie Parker in the now-famous 1983 seasonal movie A Christmas Story -- along with being in many other roles. 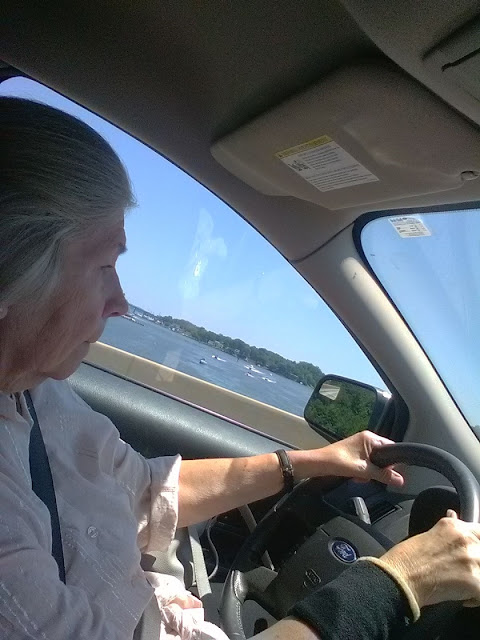 
Anyway, I went to the gym earlier and got in a six-mile treadmill jog (75 minutes, 3.5% to 4.0% incline). I skipped the weightlifting as the downstairs weightlifting room was too crowded. Besides, I'm planning on going to the gym three times this workweek. Instead, I went swimming for about 20 minutes before returning home. 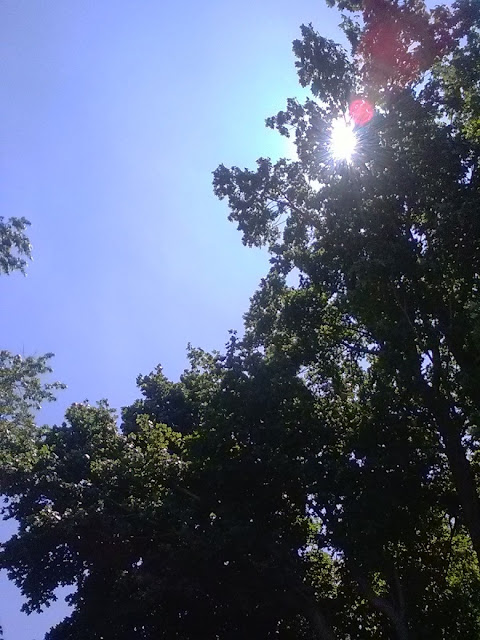 
My plan is to go again tomorrow night -- focusing on weightlifting and a swim -- and then on Thursday. For Wednesday, I need to be home and to bed early as I have to be up at a meeting (as a notetaker) at 8:30 a.m. on Thursday morning (and again on Friday morning). The federal client specifically requested me as the notetaker because I did such a "meticulous" job at the last two meetings. 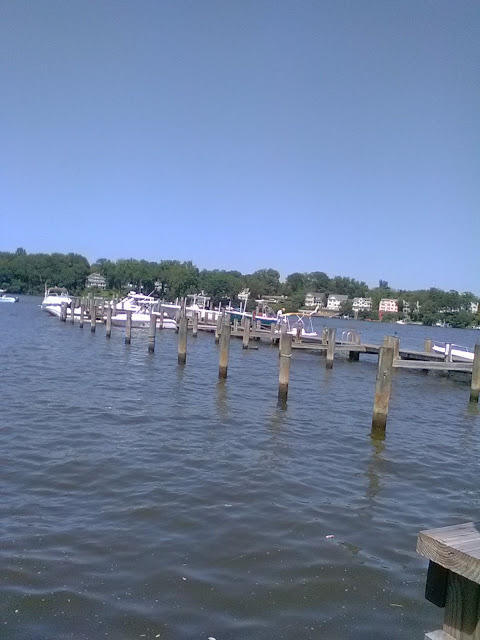 South River view from Mike's Crab House, Annapolis, Md., 2:51 p.m. July 13, 2019
We had a very nice lunch at Mike's -- sitting at the bar, where it was cooler and there was room (the rest of the place being quite crowded). We then sat outside for about 45 minutes in a shaded outdoor seating area that was a sort of adjunct to the outdoor bar. And, no, neither of us had the eponymous crabs -- they're too messy to eat. And I'm not thrilled with how they are boiled alive.
******* 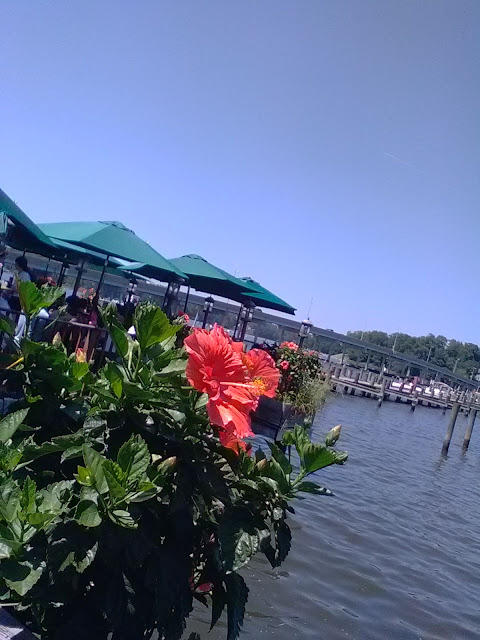 
To be clear, I'm still transitioning from one federal contracting company to another -- right now, scheduled for August 1st -- but it involves no change in my office (which has changed hands to the other company) or overall situation. 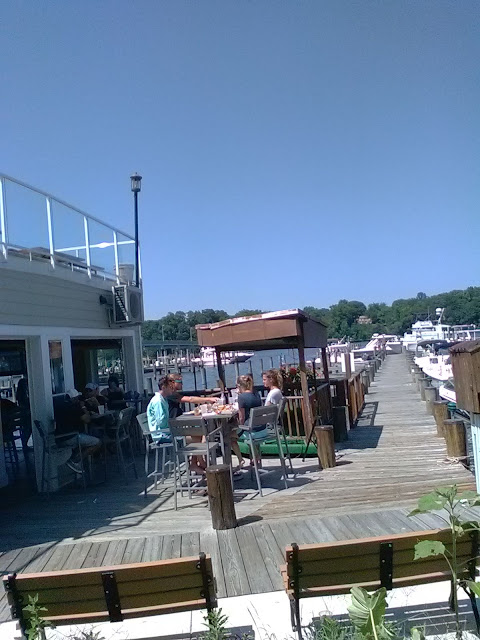 Dock-view from outside Mike's Crab House, Annapolis, Md., 3:06 p.m. July 13, 2019
There were lots of boats and even some yachts docked at the adjoining marina. It wasn't as ridiculous, presumptuous, and raucous as Washington Harbour in Georgetown. About that, I don't think after the disastrous July 4th episode that I'll be going back there for a while. 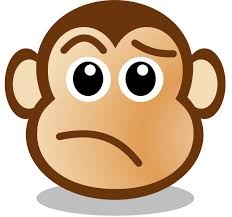 Just in case you're keeping count, I think I'm up to 8 places now where there's been some issue. My new leaf, such as it is, is to mostly just stay in -- except to go to work or the gym. Going out never, ever works out well. And, yes, I realize the issue is with me.


I'm supposed to have my vacation time (only about a week accrued) cashed out in the final paycheck -- but then I'm planning on taking a week of leave without pay in late August to go, of all places, frickin' Trumpland, North Florida, to visit my dad for about a week. I need to go, as I can't let a year at a time go by without seeing him. 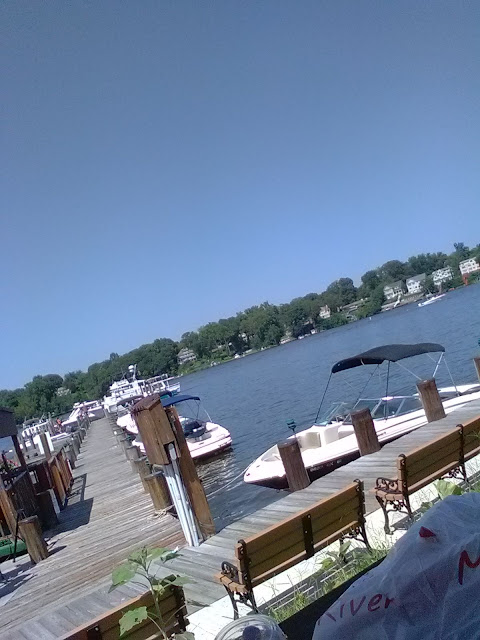 
To be clear, this blog posting is not about Trump, nor will I allow the topic of him to hijack yet another entry the way he's hijacked the country's soul (with the help of the cultic GOP). 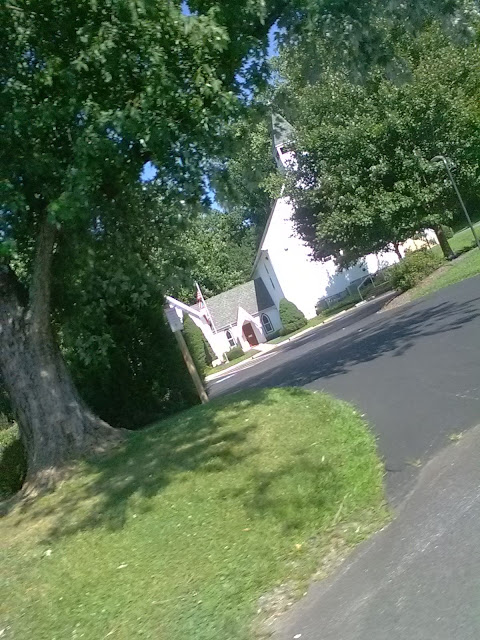 St Paul's Anglican Church, Crownsville, Md., 4:21 p.m. July 13, 2019
This is actually where my high school friend, Lynda -- with whom I reestablished a friendship about a year-and-a-half ago -- got married. I was there that day. She just had her 25th wedding anniversary.
I texted Lynda on Saturday and we met up for a few hours. She's supposed to visit me here in D.C. on Saturday, July 27th.
*******


OK, that's all for now. My blogging is going to be quite limited this week -- quite possibly until the weekend -- as I need to finish a work assignment and, well, I don't want to spend an interminable amount of time posting entries that no one reads.
--Regulus
Posted by Regulus at 11:48 PM