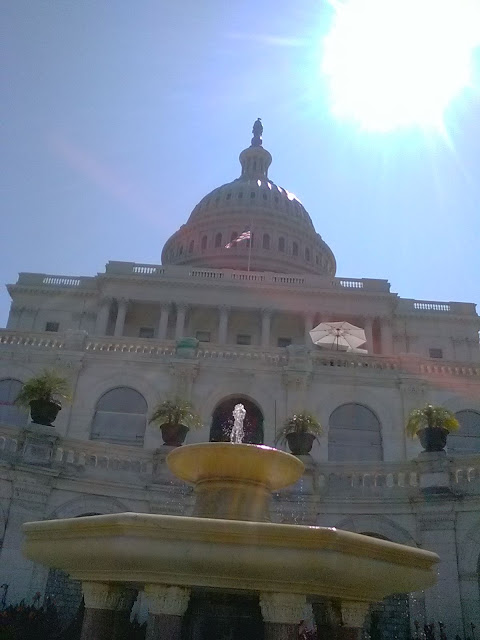 Closeup view of the west side of the U.S. Capitol building on a sunny summer day, Washington, D.C., 10:38 p.m. July 27, 2019
I chose this as the lead one because, well, I don't actually feature pictures of the Capitol building that often on blog -- despite the fact that I live in Washington, D.C., and work not that far from the structure. Of note, the West Steps have been closed to the public since shortly after the 9/11 attacks (or rather, the anthrax attacks panic) as part of Security Theatre 101). 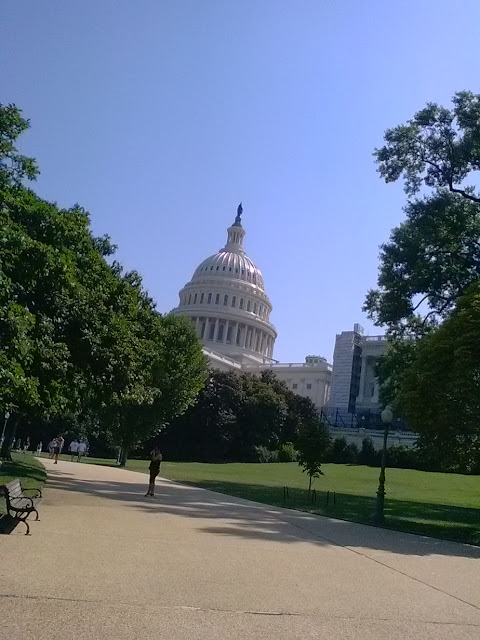 Most of the pictures in this entry -- it's obvious which ones -- were taken by me this past weekend, specifically, on Saturday and Sunday. The Saturday ones were taken on a morning (yes, a morning) walk down to the U.S. Capitol with Lynda, who came into the city to visit me for part of the day. The Sunday ones were taken as I walked to Georgetown -- mostly while walking down New Hampshire Avenue. 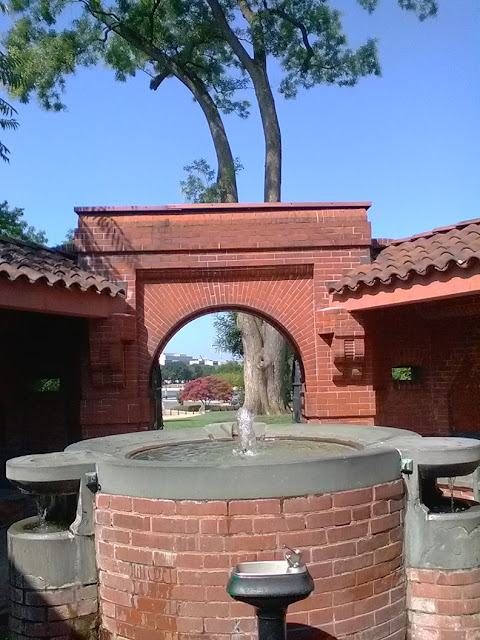 The Summerhouse on the grounds of the U.S. Capitol, Washington, D.C., 10:34 a.m. July 27, 2019
I took a picture of the small, verdant cascade inside the grotto contained with the Summerhouse, but it didn't come out that well. 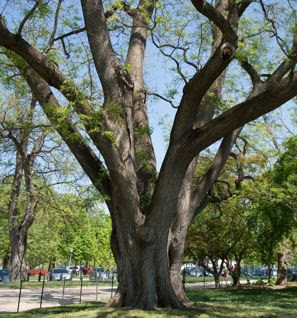 Also, it appeared that the ginormous, ancient Japanese pagoda tree (pictured left) next to the Summerhouse was missing, but I might be confusing its location with another tree.

It just seemed that the space around the Summerhouse was more open than before.

It's possible that the other tree near it was just sharply pruned. 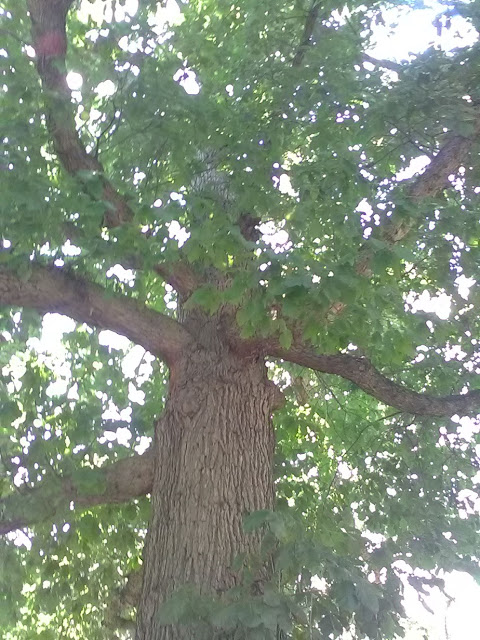 
Apologies for lack of postings on Monday or Tuesday or, for that matter, much of a posting tonight.
It has been an extremely hectic -- and workwise hellish -- past few days the big federal contract that I support changes hands to another company (one that becomes my employer officially as of August 1st). 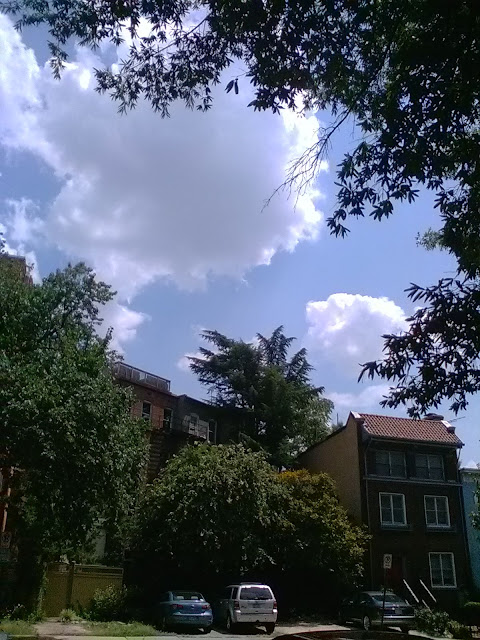 
There has been all the admin/HR stuff … the office changeover (since I am remaining the same space but that space has changed hands) with all the computer network changes … the new contractor's new corporate culture … and the need to finish up three client tasks in a hurry.
Two of those tasks were hideously meticulous and required me to stay up into the wee hours the past two nights here at home even while I tried to watch my late night MeTV shows (with my digital antenna reception repeatedly crapping out). 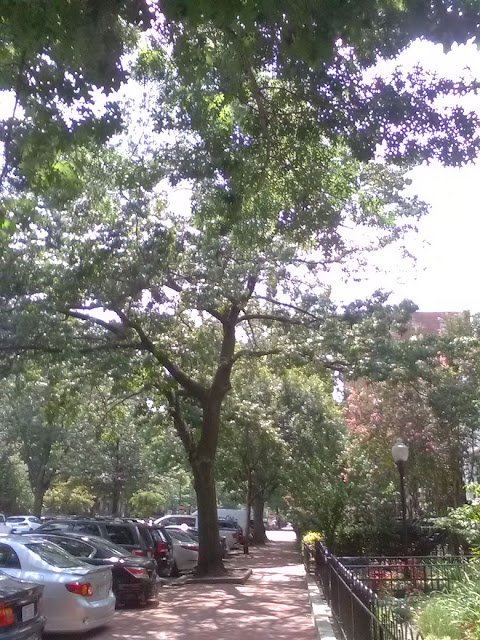 
This includes old reruns of The Carol Burnett Show -- I love her -- and episodes of The Twilight Zone, specifically, the 1980s ones that were every bit as good as the original series.
I was going to go to the gym tonight (as I did on Monday), but I had to stay at work to finish one of the two tasks, and I didn't leave until just after 9:30 p.m. 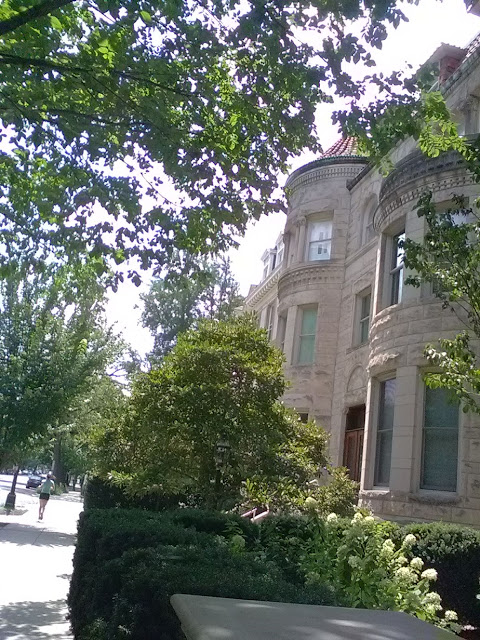 
At this point, I may not have a chance to go to the gym until Sunday or even Monday.
Having said all that, I am grateful that I have this new company to go to -- and even more grateful that I can keep, more or less, the varied and flexible sort of work situation that I have. 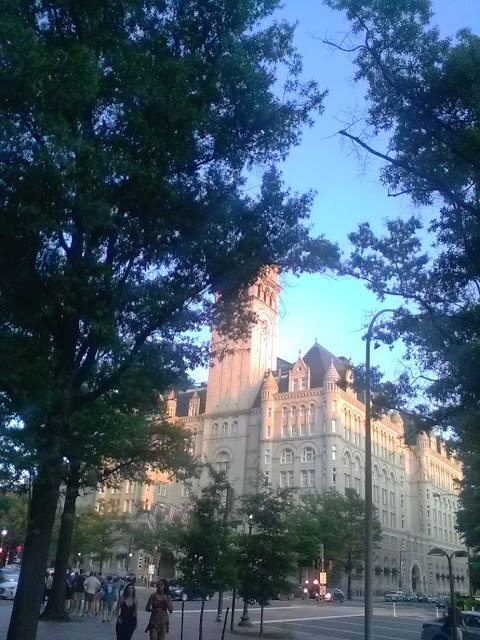 Trump International Hotel Washington, D.C., on a summer evening, 7:58 p.m. July 26, 2019
Yes, of course this structure (formerly the Old Post Office and Clock Tower) long predates its current abomination of a form -- and it will certainly survive long after the Trump name is a defunct and historical shame.
*******


Turning to the weather, it was hot and disgusting on Tuesday with highs in the upper 90s Fahrenheit. KDCA was the lowest at 95F while KDMH actually touched 100F. KBWI reached 98F, tying a daily record high set in the pre-airport period (1940) while KIAD hit 97F, one degree shy of a daily record high. 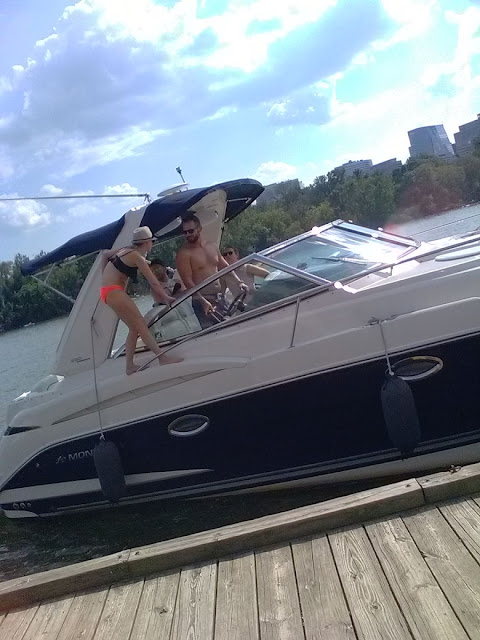 As for today, it was slightly "cooler" with highs in the 86F to 91F range but dew points notched up a tad to near 70F. 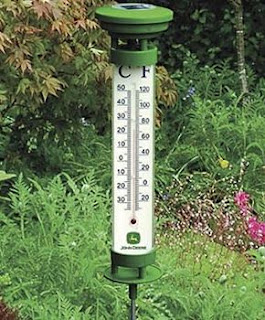 KDCA reached 90F, adding to the steadily increasing number of 90F+ days this summer, now at 35 versus a "normal" summer total of 36 -- itself a figure based upon the historical record and so not entirely "normal" nowadays. It felt better only because there was no blazing sunshine but instead was mostly cloudy all day.


More noteworthy, we did not get any of the advertised numerous showers and thunderstorms. The flash flood watch and severe thunderstorm watch that were briefly in place this afternoon. KDCA recorded 0.01" while KIAD had trace. KBWI and KDMH had zero.
A chance for showers and t/storms is in the forecast the next several days but they keep crapping out. We went from super-wet to nearly totally dry -- with the atmosphere not "wanting" to rain. I wouldn't call it a drought, though, at this point. It's just frickin' middle/high summer in our globally warming world. 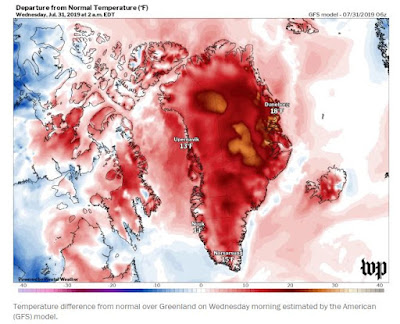 Greenland surface temperature anomalies as shown by the initialized 6Z 31 July 2019 GFS, as prettied up by CWG/WP.
*******


Speaking of our globally warming world, this Capital Weather Gang entry is of direct and strong relevance (link embedded): The Greenland ice sheet is in the throes of one of its greatest melting events ever recorded.
I may repost that entry in its entirety. 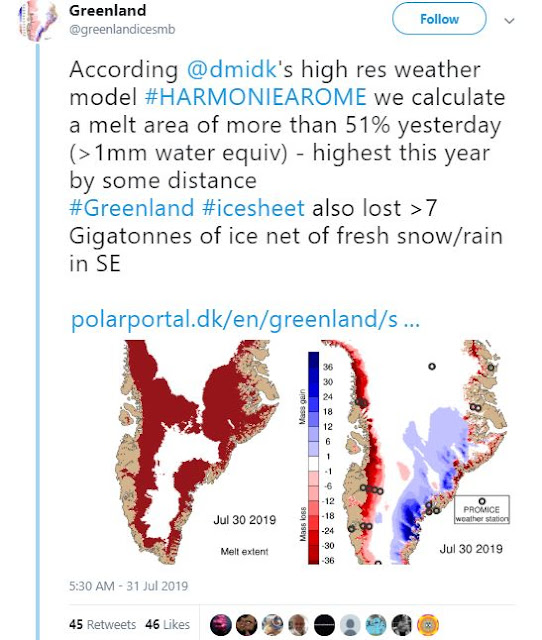 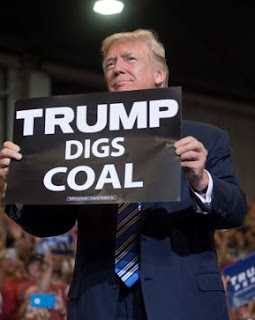 Meanwhile, your nearest Trump Teabagger crazy is going on and on about how we need filthy and toxically poisonous coal.

It's worth explicitly stating once in a while:

The GOP cult is the socio-cultural equivalent of the Ebola virus -- destroying its own host in quick order.


But this is not a political entry, nor am I going to get into anything about round two of the Democratic presidential candidates' debates, which again was spread over two nights and involving 20 candidates (out of a field of about two dozen) and which CNN again treated like a WrestleMania pay-per-view event for Red State viewers.
You can read this Dana Milbank piece about that (link embedded): Marianne Williamson won't be president. But her 2020 competitors should take note.
I will note that wacky Marianne Williamson (in her appearance last night) once again made some of the most insightful rhetorical points including this extremely quotable quote:
I assure you -- I lived in Grosse Pointe, what happened in Flint would not have happened in Grosse Pointe. 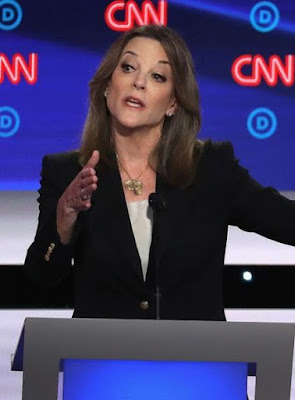 "This is part of the dark underbelly of American society. The racism, the bigotry and the entire conversation that we're having here tonight, if you think any of this wonkiness is going to deal with this dark psychic force of the collectivized hatred that this president is bringing up in this country, then I’m afraid that the Democrats are going to see some very dark days."


Look, it's either going to be Biden or a second Trump term … 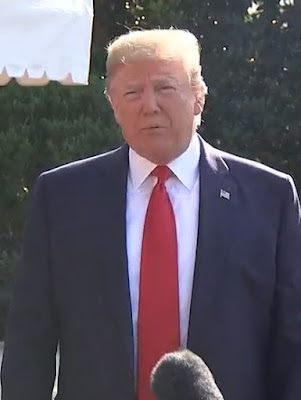 … and as Trump's syphilis plus his solipsism, megalomania, antisocial personality, and sundry other pathologies will have progressed to the point that between them, a "Moscow Mitch" Senate block, and a rightwing Catholic-crazed Federal Society-filled judiciary running amok, the country ends up in a bad place quicker than Greenland's ice summer is melting.


BTW, I totally agree with this piece from FiveThirtyEight (link embedded): Political Confessional: The Man Who Thinks The U.S. Is Better Off As A Bunch Of Separate Countries.
This guy "Chris" literally read my mind -- up to and including the Mississippi River analogy he used.
OK, I'm going to end this entry now. My next entry might not be until the weekend.
--Regulus
Posted by Regulus at 11:59 PM