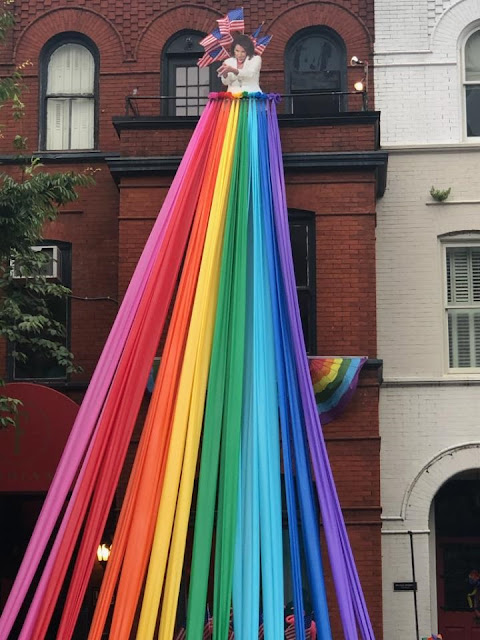 Decoration for Capital Pride at Floriana restaurant on 17th Street NW, Washington, D.C., June 8, 2019
Yes, that's an image of Nancy Pelosi's now-famous State of the Union "applause" for our President …Needless to say, this is a Dito specialty.
This picture was sent to me by one of Jeremy's friends. I tried to take a picture of it but it came out lousy. Most of the rest of the related pictures in here are taken from this WTOP article plus the Capital Pride twitter feed. 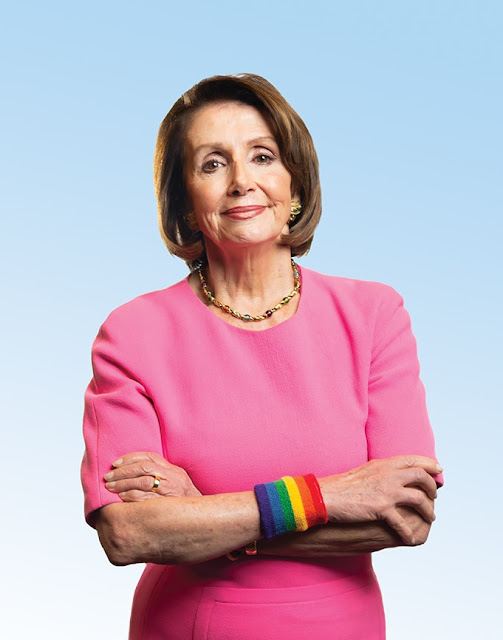 Speaking of House Speaker Nancy Pelosi, she was featured on a recent cover of Metro Weekly ahead of this year's Capital Pride event.
*******


Yesterday, I unexpectedly ended up at the Capital Pride parade on 17th Street. 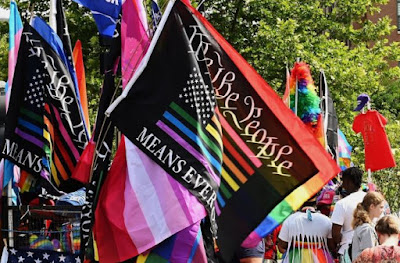 Let me say upfront that I was unaware of the panic that erupted at Dupont Circle over an "active shooter" rumor. That turned out not to be the case, but from what I've heard, the police still arrested someone for carrying a firearm. 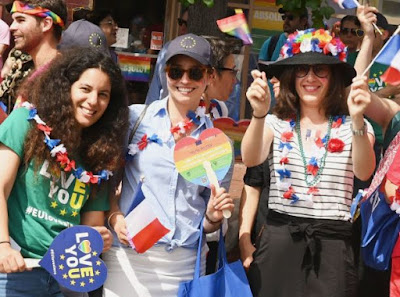 There was a heavy (but not aggressive or intimidating) police presence ahead of time -- and that certainly helped limit anything bad.
Anyway, I was going to walk over to Georgetown yesterday -- it being a sunny, warm, humid Saturday and my planned free day -- but instead I ended up going to Jeremy's place where one of his friends showed up and we walked over to 17th Street, going to Annie's. 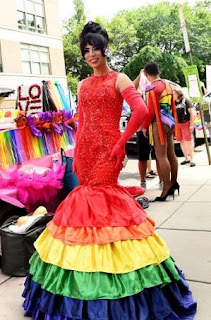 About the parade, I haven't watched it in years (nor will I be going down to the street festival occurring today on Pennsylvania Avenue). I didn't realize that the parade goes on for literally 4 hours in what felt like the entire District of Columbia phonebook yellow and blue pages participating.

I gave up after about 90 minutes -- and even that included going back into Annie's for a drink or two.


What I also didn't realize is that a lot of the parade-viewing activity has shifted to 14th Street -- and the massive throngs along 17th Street of years gone have vanished with far fewer people. 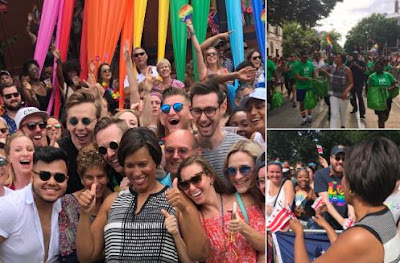 I saw the Mayor (Muriel Bowser) walk by in the parade (with lots of security). I've never actually seen her before in person. And D.C. Delegate Eleanor Holmes Norton walked by. She's ancient and looks like all the sand in her hourglass is in the bottom chamber, but she is still fairly mobile.
At least she wasn't attempting to drive (or park) a vehicle.
Of note, I took a lot of pictures, but they all came out like crap -- with my cheap-ass flip-open cellphone -- and I ended up deleting all of them. 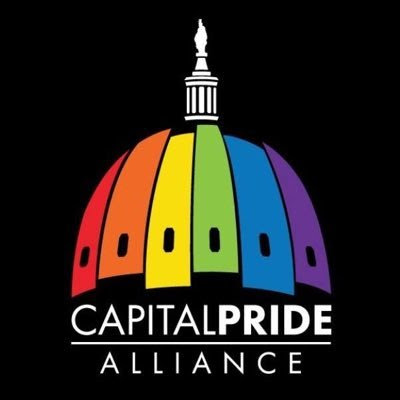 On the one hand, given the current political climate, the logo for this year's event -- from the Capital Pride Alliance (see above) -- definitely had a political message undertone. On the other hand, given that, like, 99.95% of the crowd there are anti-Trump, there weren't many overt political messages -- and certainly none in the among the parade participants (as opposed to the viewers). 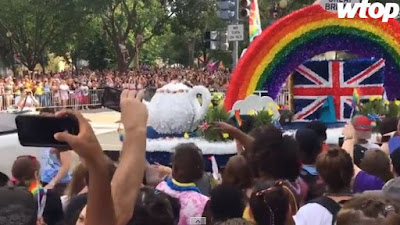 Indeed, only the Floriana one (lead image to this entry) was the exception -- but in a very clever way.
Now, in years and decades gone by, the ENTIRE event revolved around … 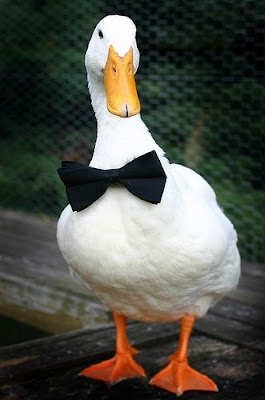 [OK, here is omitted an entire riff on the long-since exhausted topic of M. WADE Phukogoogol and how it raked in tips by the wheelbarrow-full -- culminating in proclamations via social media about how it earned "mucho coins-o" or some such sorority gay girl-like narcissistic duck-clucking. I will say that its former establishment has, maybe, another 5 years before that racket runs its course.


It's a business model for the gay community hat just doesn't work any longer in an urban world of gender "fluidity" and a big LBGTQIA mashup. 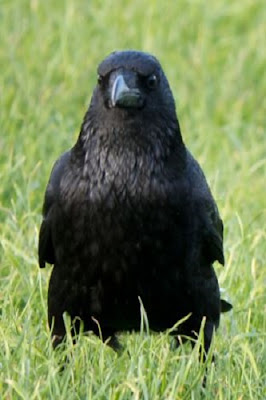 Indeed, the only reason it will last into the 2020s is because there are a few hundred customers-for-life who came to D.C. back in the 1980s and '90s and now they're just aging-in-place unable to conceive of doing anything differently.

The establishment's attitude, it's worth pointing out, is vintage stand-and-model bar 1998. It's like a Clinton-era time capsule. 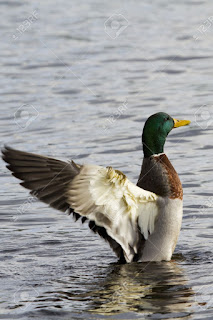 In short, the place will be there until Expenses minus Income > 1 cent.

To its credit, I suppose, the Phukogoogol actually managed to cleanly break its tie to that urban services industry straitjacket that locks in so many. Instead, it is now is playing homo hearth and home in the Virginia suburbs and running weird academic charities.]

I should mention that next week in New York is 2019 World Pride -- timed to occur in New York City for this year's 50th anniversary of the Stonewall uprising.

Now the actual 50th anniversary of the police harassment raid and resulting uprising at the Stonewall Inn on Christopher Street in lower Manhattan is June 28th. 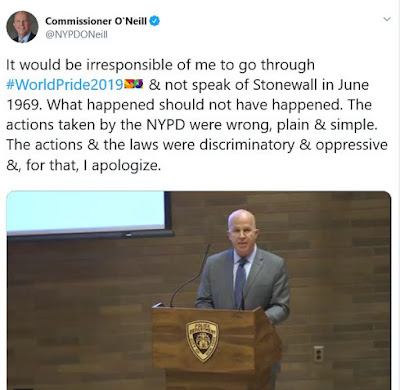 The apology is for that long-ago raid by the long-since-defunct Public Morals Squad. Here is the New York Times version of the story (link embedded): 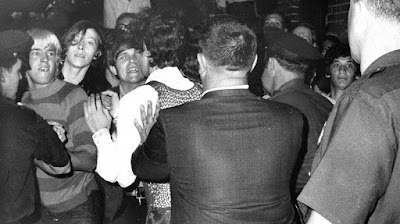 Look at the blonde guy in the striped sweatshirt: He was ready for battle.
******* 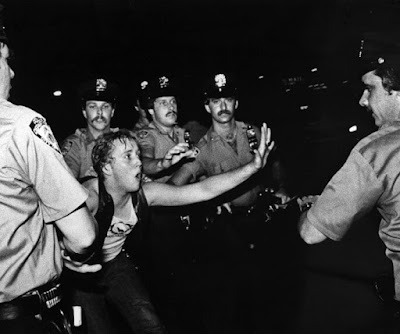 Oh, yes, and probably because I want to, I subscribe to the … 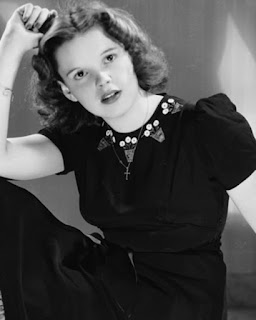 I didn't yet exist in the world, although my mother was four months pregnant with me about 40 miles away as the crow flies in Ocean Township / Asbury Park, New Jersey.


I asked her once if she had heard about Stonewall at the time. Her reply: "No! I was pregnant with you and on my own and had to go to work everyday! I didn't follow things like that." 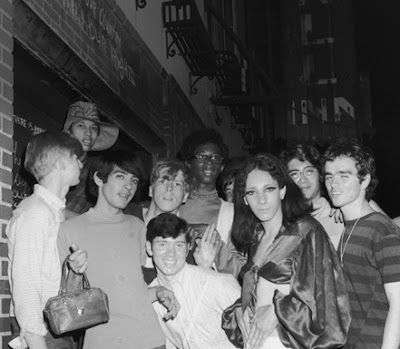 
As a brief update this Sunday afternoon.
It's a showery day here in the immediate D.C. area. This this follows multiple forecasts of rainfall, including heavy rain, over the past week to ten days that didn't pan out. Of course, that comes after a record wet 2018 and multiple record wet 365-day periods. 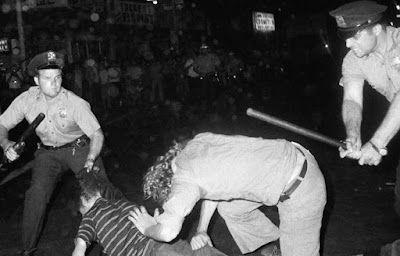 Caption: An NYPD officer grabs a youth by the hair as another officer clubs a young man during a confrontation Aug. 31, 1970, in Greenwich Village after a Gay Power march in New York.
This was one year after the Stonewall uprising in what was technically the first "gay pride" march in New York City. And, no, it's not impossible to go back to that kind of world.
******* 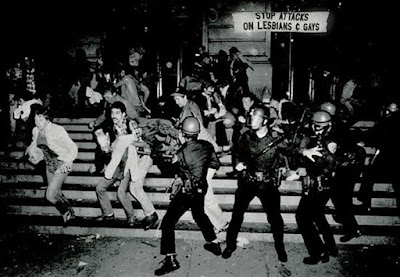 I'm planning on going to the gym this afternoon and then doing laundry tonight, although I'm also supposed to go to Fred & Doug's place next door along with Aydin for one of our 'Allo! 'Allo! viewing Sunday evening dinner parties. 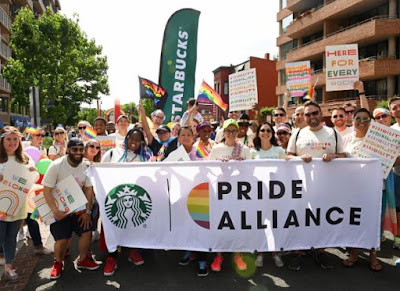 My next planned entry will be on Monday or Tuesday. I have to say, though, that I have a lot of work to do this coming week -- with an eye to having five reports (on which I'm way, way behind) wrapped up by next Monday morning. That being the case, blogging might be a bit light this coming week.
--Regulus
Posted by Regulus at 3:12 PM