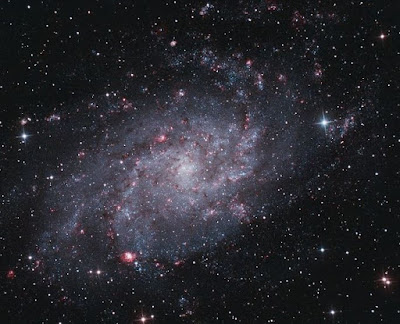 The Triangulum Galaxy in its Local Group distant glory.
This entry is dedicated to the Triangulum Galaxy, also known as Messier 33 or NGC 598, an "unbarred" or, perhaps, weakly barred, "isolated" galaxy located just under 3 million light years away. The Triangulum is -- under ideal conditions -- visible with the naked eye -- and thus is one of the most distant "permanent" objects so visible. 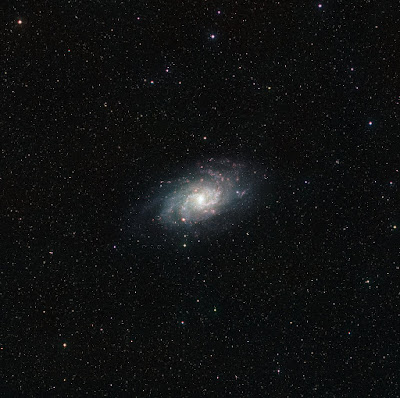 Ground-based image of the Triangulum Galaxy.
*******


The Triangulum Galaxy is so named because this naked-eye visible "island universe" is located in the Northern Hemisphere constellation Triangulum ("The Triangle"). The Triangulum Galaxy along with the much larger Andromeda Galaxy and our own dear Milky Way Galaxy are the three main members of what is known as the Local Group. 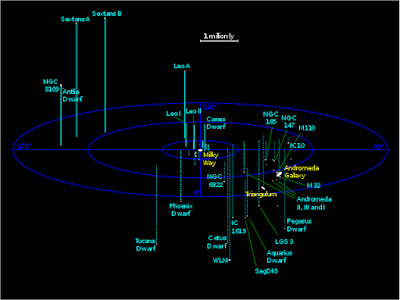 Local Group schematic
From the schematic, you can see that the Triangulum and Andromeda Galaxies are relatively close to each other -- one online source I found stated they were separated by 750,000 light years, and based upon hydrogen gas streams between them, may have had a closer interaction in the past. What's more, the Triangulum appears to be moving toward the Andromeda for a possible collision and coalescence even as the Andromeda and Milky Way Galaxies are on an eventual collision / coalescence -- or, alternatively, a near-miss and ejection from the Local Group.
To be determined -- but not until long after the human species is extinct or evolved into something else. 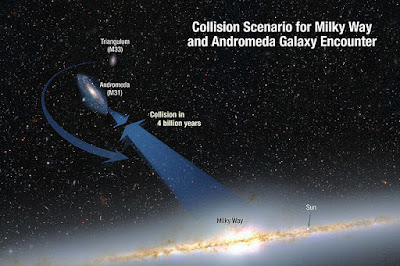 One of the possible collision paths of Andromeda and Milky Way in several billion years and a possible path of the Triangulum.
*******


Triangulum has an estimated 40 billion stars or roughly one-fifth the estimated 250 billion in the Milky Way (plus or minus 150 billion) while the Andromeda has upwards of 1 trillion (i.e., 1,000 billion) stars. 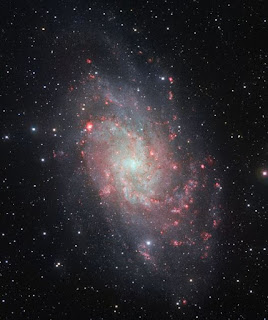 Triangulum is one of the three big galaxies in the Local Group -- the others being Andromeda (M51 / NGC 224) and our own beloved Milky Way Galaxy -- plus the swarm of satellite "dwarf" galaxies (~ 50) orbiting one of the three, not to mention sundry stellar tidal streams, globular clusters, ghostly nebula, and galactic haloes.


The Triangulum is close enough that the Hubble's Advanced Camera for Surveys was able to do what it did with the Andromeda in 2015 -- which I featured in this Dec 2018 entry -- namely, create a mosaic of individual stars in a portion of the galaxy that nothing short of bewildering in its glorious detail. 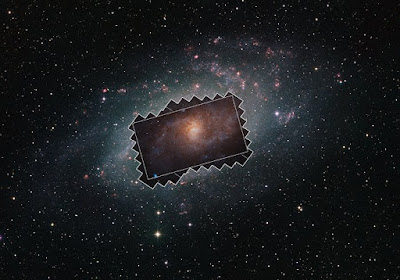 The Triangulum Galaxy showing the zoomed-in area (irregular region) and the inner rectangle featured in the image directly below (zoomable tool region).
*******


The mosaic image -- and the zoomable tool used to see to see any portion of it down to the level of individual stars -- are available from the Hubble Space Telescope website:
The main photo release was on Jan 7, 2019: Hubble takes gigantic image of the Triangulum Galaxy.
Additional information is available in this related release: The sharpest view ever of the Triangulum Galaxy.
The actual "zoomable" tool site is here. 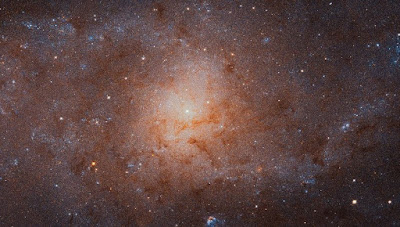 This is the rectangular region from the above image in which the zoomable tool can be used.
*******


Keep in mind that the zoomed area is the galactic core and the inner spiral arms -- and even with that, it's just the "front" portion (i.e., the side facing our galaxy), so that it is but a small fraction of the estimated 40 billion stars that comprise the Triangulum Galaxy. 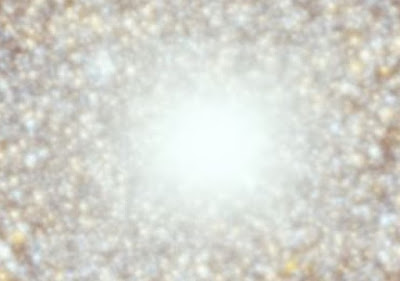 This is the very center of the Triangulum Galaxy "zoomed in" as much as possible with the zoomable tool.
There are simply too many stars densely packed together to have a useful visible light image. Per Wikipedia, observations indicate that the galactic nucleus has an ultra-luminous X-ray source that varies by 20 percent over a 106-day cycle. If this source is a black hole, it is not a supermassive one since the velocity of stars in the inner galactic core (which does not contain a bulge) place an upper limit on the object at about 3,000 solar masses.
******* 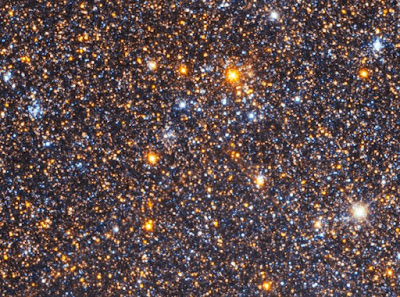 This image and the ones bellows are from a series of zoomed-in images that I screen captured -- but exactly where in the rectangular region cited above, I have no idea. (The exception is the very last one.)
*******


The second release states the following:
This gigantic image of the Triangulum Galaxy — also known as Messier 33 — is a composite of about 54 different pointings with Hubble's Advanced Camera for Surveys. With a staggering size of 34,372 times 19,345 pixels, it is the second-largest image ever released by Hubble. It is only dwarfed by the image of the Andromeda Galaxy, released in 2015. 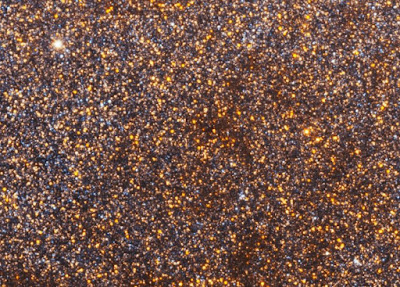 Excerpt from the first release:
At only three million light-years from Earth, the Triangulum Galaxy is a notable member of the Local Group — it is the group’s third-largest galaxy, but also the smallest spiral galaxy in the group. It measures only about 60 000 light-years across, compared to the 200 000 light-years of the Andromeda Galaxy; the Milky Way lies between these extremes at about 100 000 light-years in diameter. 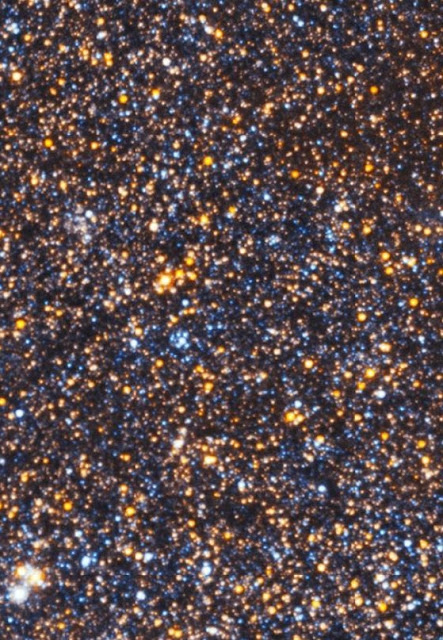 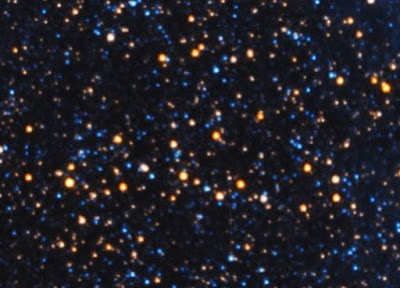 In contrast to the two larger spirals, the Triangulum Galaxy doesn't have a bright bulge at its centre and it also lacks a bar connecting its spiral arms to the centre. It does, however, contain a huge amount of gas and dust, giving rise to rapid star formation. New stars form at a rate of approximately one solar mass every two years. 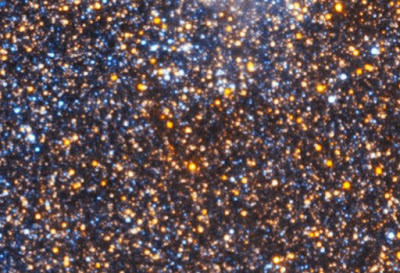 Although it has all this gas and dust and rapid star formation, ironically, what captured my attention is the sheer number of older and/or cooler orange stars that it has. 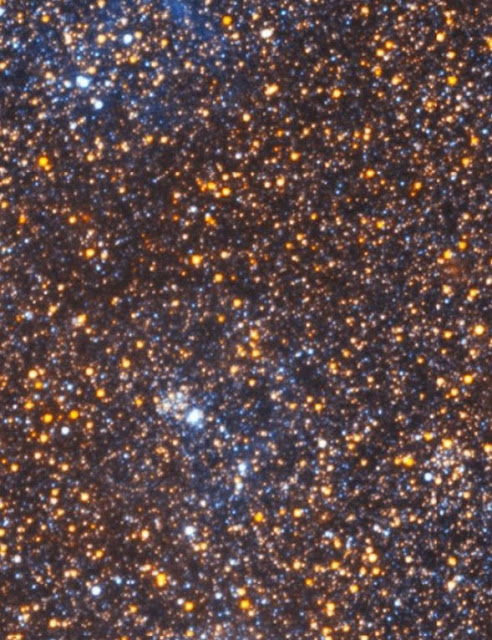 Here is an image showing just so many older and/or cooler orange stars interspersed with younger and/or hotter bluish-white ones, but orange ones predominate.
This could suggest that the majority of any possible planets circling stars in the Triangulum Galaxy have very orange suns -- and all that this would imply for what it would look like from the surface of an Earth-like world... Artist's conception of one of the seven terrestrial plants in the TRAPPIST-1 system.
******* 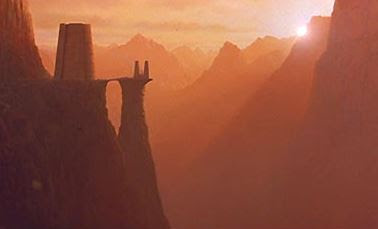 
There are some notable exceptions representing major star-forming regions to include NGC 595 and NGC 604. 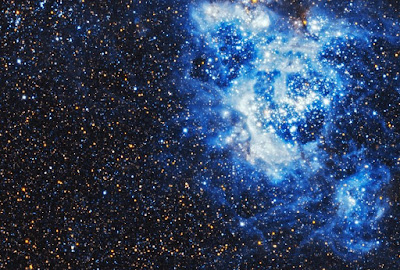 NGC 604 within the Triangulum Galaxy.
As the main photo release explains: Some 1500 light-years across, this is one of the largest, brightest concentrations of ionised hydrogen (H II) in our Local Group of galaxies, and it is a major centre of star formation. The gas in NGC 604, around nine-tenths of which is hydrogen, is gradually collapsing under the force of gravity to create new stars. Once these stars have formed, the energetic ultraviolet radiation they emit excites the remaining gas in the cloud.
And with that, I think we'll end this celebration of All Stars Triangulum Galactic.
--Regulus
Posted by Regulus at 3:55 AM