**With apologies to Diana Ross, not to mention Marvin Gaye and Tammi Terrell. 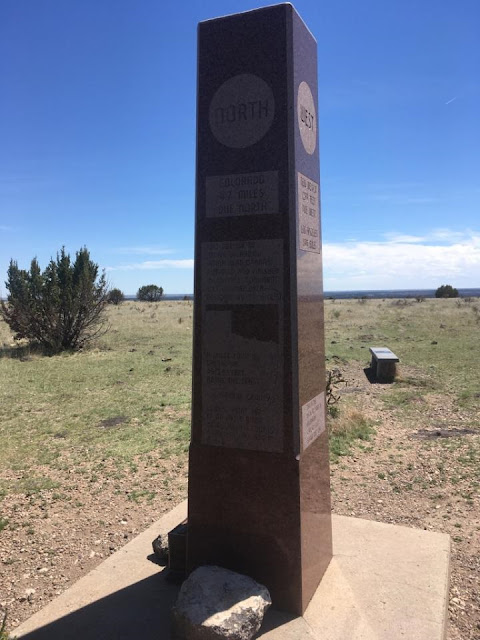 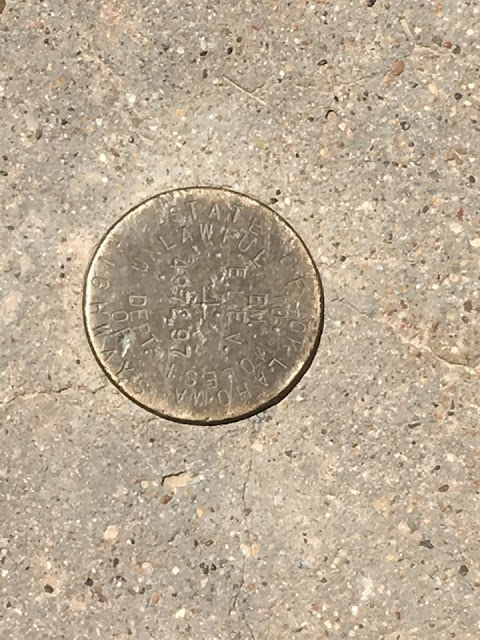 The actual marker at base of the monument that denotes the highest elevation in Oklahoma, April 27, 2019
*******


This entry features a series of images -- taken both on April 27, 2019 and just over a year earlier in April 2018 (date unspecified) -- that my friend Chester took while on an approximately two-week work trip he has made to Oklahoma City. He works for the National Weather Service and has an annual assignment that has brought him to "OKC" twice. 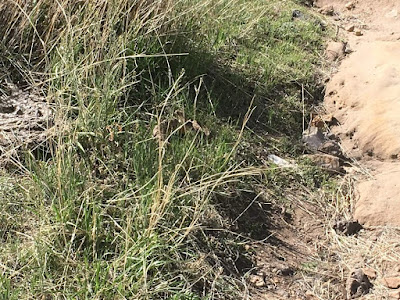 The trail on Black Mesa to the Oklahoma-side high spot, April 27, 2019
There's actually a rattle snake in the brush in this picture, not readily visible but certainly audible at the time.
Governor Stitt -- just like Governor Mary before him -- might get ideas of where to get lethal drugs (since Big Pharma won't sell them to the state's busy gruesome death factory) for the next execution. It would certain save the trouble of having get minions to drive around Walmart parking lots in the middle of the night doing shady underworld dealings. What's more, there's no need "to Google it" on the lethality of the rattle snake.
******* 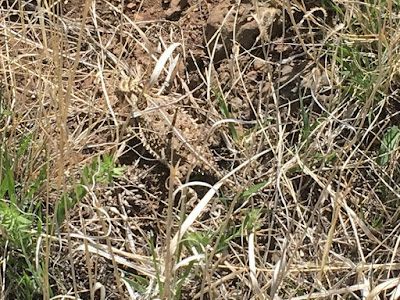 A lizard in the brush along the trail up Black Mesa, Oklahoma, April 27, 2019
It appears to be a Texas horned lizard. Apparently, the creature is docile -- but it can shoot blood from their eyes when something tries to eat it. Yuck.
*******


Just as an aside, I've never actually been in Oklahoma. It's one of eight U.S. States -- to include OK, UT, KS, NM, ND, MO, MS, and AL -- that I have not had the fortune to visit (and only two of which I actually want to see, Utah and New Mexico). 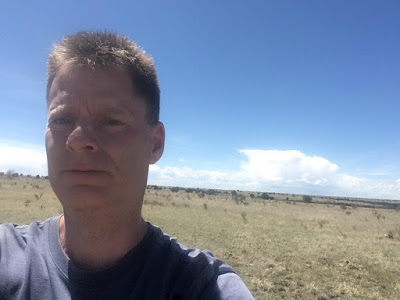 View from Black Mesa, Oklahoma looking west into New Mexico (with distant cumulonimbus visible), April 27, 2019
That t-storm is about 100 miles away. Of note, it has been climate change-fueled very wet in Oklahoma this year -- to the point of disastrous flooding in parts of the state. 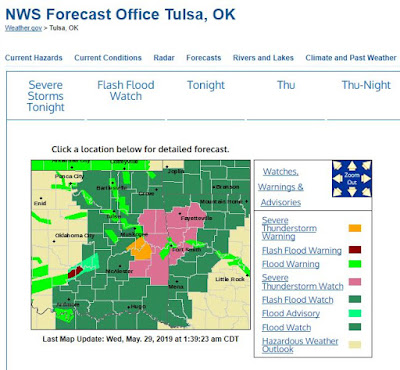 But it's OK, because Governor Stitt, like Governor Mary before him, and the still-100% crazy rightwing legislature don't "believe" in climate change, so that makes it go away.
*******


On both trips, Chester took a fantastic single-day (18-hour-long) vehicle trip to the westernmost portion of the Oklahoma panhandle while staying in Oklahoma City. On the April 2018 trip, he visited the highest point in Oklahoma known as Black Mesa and the geographical triple point ("tri-point") known as the Preston Monument where the States of Oklahoma, New Mexico, and Colorado. 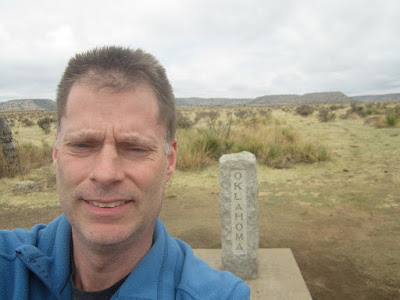 
Chester and I have a hobby of finding these notable geographical points. Recall our October 2012 Baltimore boundary tour trip. 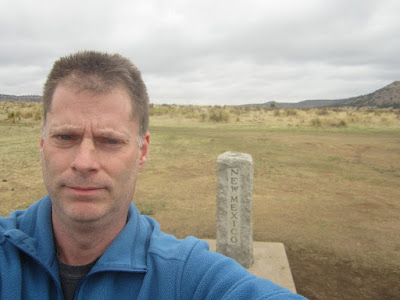 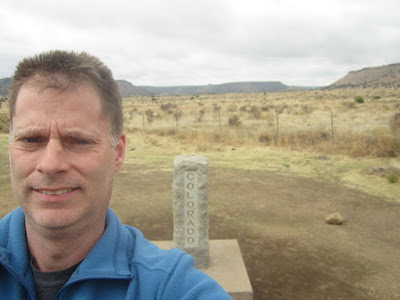 
On the April 27, 2019 trip, he again visited Black Mesa along with another geographical state boundary tripoint, namely, the triple meeting point of Oklahoma, Texas, and New Mexico. That point doesn't have a formal name, although Wikipedia refers to it as the "Texhomex" marker
.

The line of longitude connecting the Preston Monument and the Texhomex marker is the "Cimarron Meridian" -- named for the western-most county of the Oklahoma panhandle. The county seat of Cimarron County is Boise City (population: 1,266 in the 2010 Census) 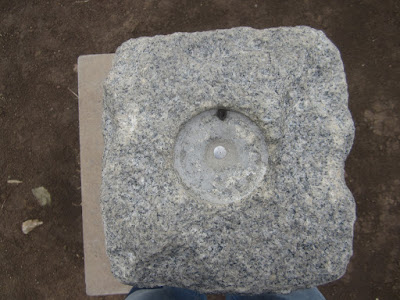 Closeup of the top of the Preston Monument, April 2018; that little metallic circle -- smaller than a dime, I estimate -- is in three states: Oklahoma, New Mexico, and Colorado.
Here is a super-closeup of it: 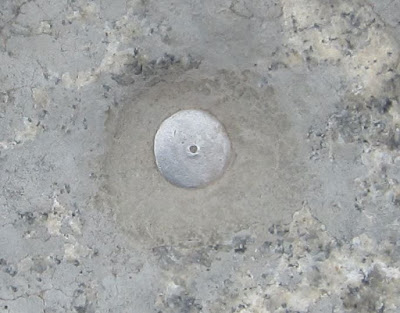 
Speaking of Boise City, Chester drove through it this past April on his day trip … 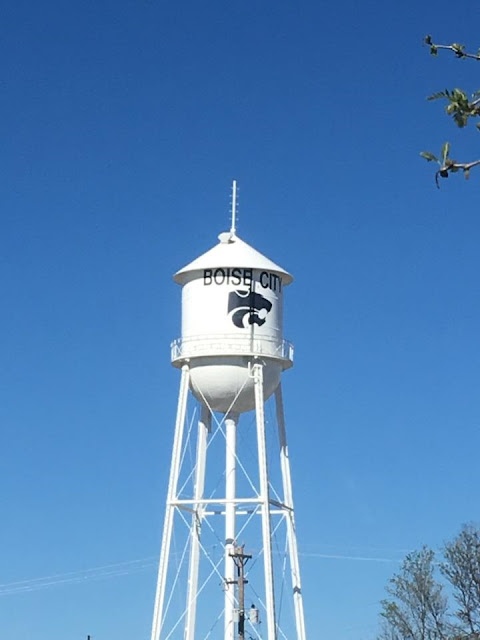 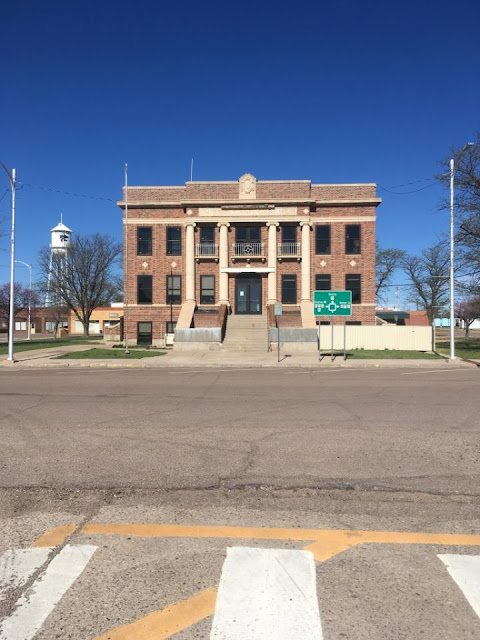 The Cimarron County Courthouse, April 27, 2019
This building is actually on the National Register of Historic Places.
Boise City -- and this building in particular -- has the weird distinction of being a U.S. city to have been [accidently] bombed by the U.S. military during World War II in a July 1943 training exercise that went seriously awry, although fortunately, no one was killed.
******* 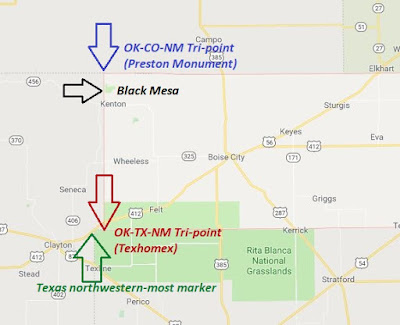 Google map of the Oklahoma Panhandle's western portion with the four spots featured in this entry marked to include (clockwise): The Texhomex marker, the NW corner point of the Texas panhandle, Black Mesa (Oklahoma high spot), and the Preston Monument.
You can also see Boise City's location with respect to these points.
*******


Just a few miles from the Texhomex marker is another point of geographical note: The northwestern-most corner of the Texas panhandle. That point -- which also straddles the Central and Mountain time zone boundary -- marks the boundary of Texas and New Mexico where the latter sort of "wraps around" the former (at right angles). 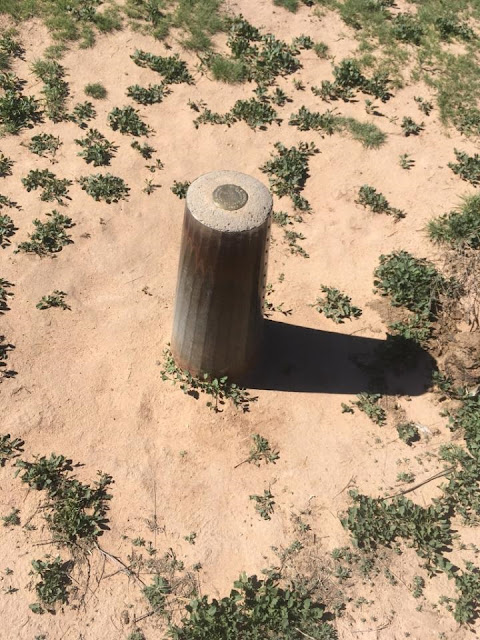 
The fact that the Texhomex marker is NOT also the northwestern-most point of the Texas panhandle is because the Cimarron Meridian (representing the Oklahoma panhandle's westernmost edge at 103 West longitude) doesn't extend quite to it -- and so New Mexico has an extra tiny "strip" about 2.5 miles in width and 34 miles long (representing the width of the Oklahoma panhandle or 0.5-degree latitude). 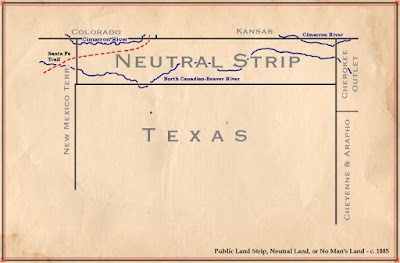 
Why the "Public Land Strip" -- a.k.a., the Neutral Strip or "No Man's Land"-- exists at all is explained in this article by The Keeper of All Knowledge. Also, the same website linked above about the 2.5 mile discrepancy gives some history here. 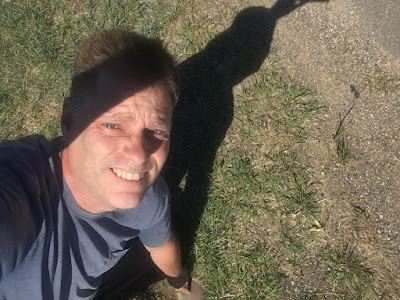 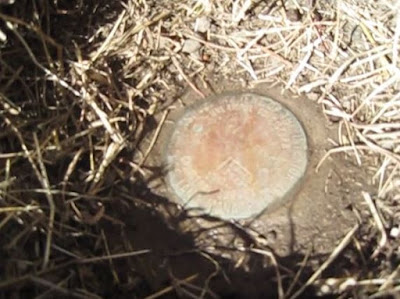 
[I couldn't readily find the exact longitude of the Texas panhandle's western-most extension (i.e., its border with New Mexico), but this article explains why it isn't the same as the Cimarron Meridian but "misses" by about 2.5 miles.] 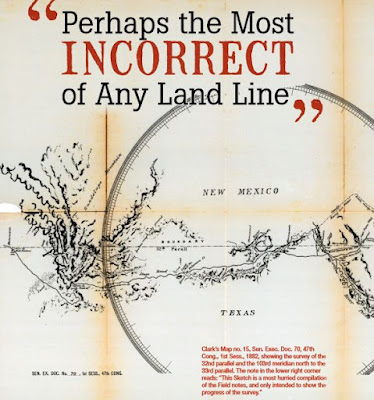 However, according to this Winter 2007 article in The American Surveyor (citing another article), the actual surveying error ("perhaps the most incorrect of any land line") that created this situation isn't with the Oklahoma panhandle but rather the surveying that was done for the Texas - New Mexico boundary (both the south and east sides, from the perspective of New Mexico) -- so that New Mexico is actually "cheated" out of about 667,000 acres of land. 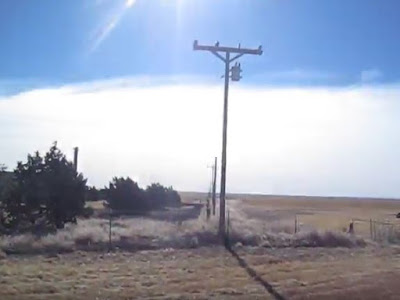 The view from the northwestern-most Texas panhandle marker looking due south (screenshot from above-linked YouTube video). The line of utility poles marks a property boundary -- as well as the Texas/New Mexico boundary (and the Central/Mountain time zone boundary).
*******