Well, my previous entry notwithstanding, I've decided to post a Jukebox Saturday Night entry -- except it is after midnight …
"Heaven" by Ronny Jordan from his At Last album (2003)
I've featured Ronny Jordan in two previous musical interlude entries to include this one from last July and this one from nearly three years earlier. Ronny Jordan died much too young.
*******


Next, a nice instrumental by a famous musician's group…
"Love Is You" by Santana from the band's album Freedom (1987)
This instrumental also appeared on Santana's 1997 album Vol. 1: Best Of Instrumentals.
*******


And we'll end on the same smooth jazz note we began …
"This Masquerade" by David Sanborn from his release Pearls (1995)
The information on Pearls here indicates that Leon Russell wrote This Masquerade, and as The Keeper of All Knowledge explains, it first appeared on his 1972 album Carney. It was later covered by George Benson in 1976 on his hit Breezin' album.
I've featured David Sanborn in a series of JbSN entries over the year. The prolific and talented Sanborn remains quite active.
*******


So, after returning from Sette Osteria, where I had dinner at the bar, I ended up watching the MeTV lineup anyway. 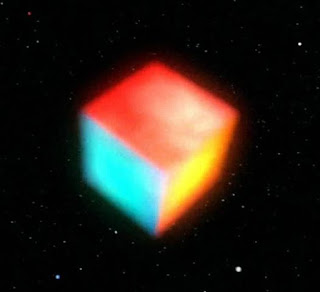 Of note, the Star Trek: TOS episode is "The Corbomite Maneuver" -- the episode that features that psychedelically-colored flashing cube "buoy," an enormous sphere consisting of lemon-like smaller spheres, and the face of booming voiced Balok.


Balok turns to be a benign little man-child played by actor Clint Black, and Balok itself is just a puppet (dummy) sitting in chair. 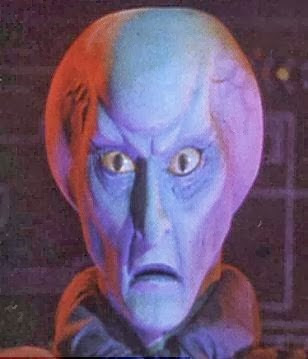 It's worth noting, though, that the visage of Balok (pictured left) was used on Star Trek: TOS during the closing credit scenes. Also, I should note that Star Trek: TOS episodes have been "digitally remastered" -- greatly improving the original mid-1960s special effects.


OK, now I'm signing off. My next planned entry will be late Monday.
--Regulus
Posted by Regulus at 12:34 AM