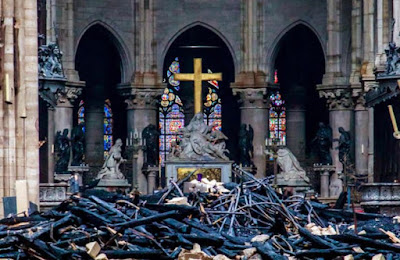 The Pietà statue "Descent from the Cross" by sculptor Nicolas Coustou, created in 1725, having survived intact the great Notre-Dame Cathedral fire of April 15, 2019, stands above piles of charred rubble by the altar.
*******


I wanted to post this update on the Notre-Dame Cathedral massive fire and aftermath. I was going to include it in my regular entry, but I think it best to post it in a standalone entry. 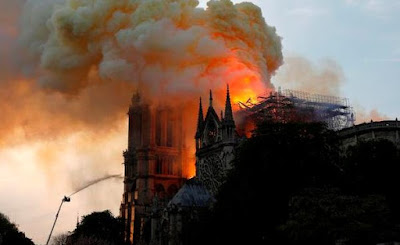 So, about that horrendous conflagration, the good news -- in addition to the fact that no one was killed or seriously hurt -- is that both the majority of the treasured relics were saved in dramatic fashion and, even more to the point, the structural integrity of the cathedral's twin bell towers, sides, and famed flying buttresses are intact and some (although not all) of the stained glass windows were spared irreparable damage. 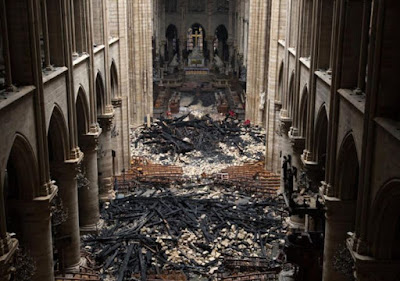 The roof is gone and daylight is pouring in -- something that will have to be quickly corrected since those gaps could lead to more structural issues (not to mention further damaging the interior just from weather and temperatures). 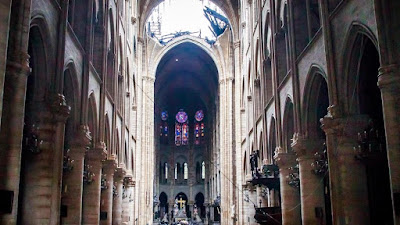 It's clear there will also be a massive, sustained, national government-led effort to rebuild this 850-year old symbol of France -- and the fact that there has been a sort of bidding war among sundry French billionaire corporate oligarchs to fund it, well, yes, the optics of this are problematic, but just getting the funds is still worthwhile. 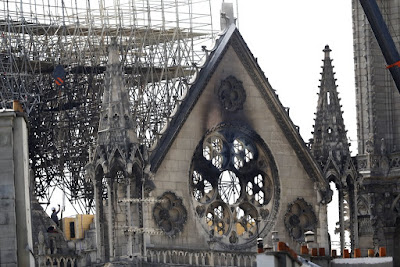 President Macron announced a highly ambitious plan to restore the cathedral in five years, but the figure bandied about by experts is that it will take more like 10 to 15 years for full recovery and restoration. 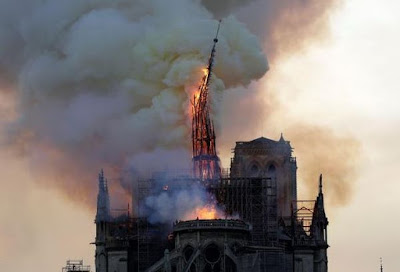 The moment the spire of Notre-Dame Cathedral collapsed in the conflagration of April 15, 2019
*******


This includes a design contest for a new spire to replace the one that burned and collapsed in the inferno. That spire had been erected during a major renovation between 1844 and 1864 -- replacing an earlier one. 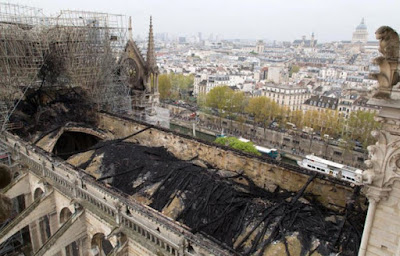 It's also worth noting that just a few days before the April 15th conflagration, 16 religious statues around the base of the 90-meter spire had been removed for renovation. They bear the likenesses of the 12 apostles and symbols of four evangelists.
The Washington Post had this piece on the spire's history. 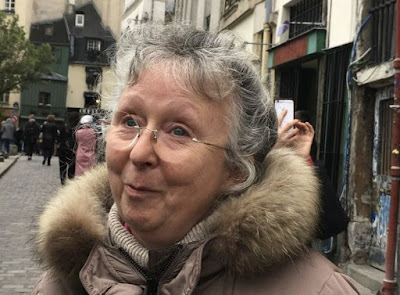 I would like to note this poignant Associated Press article about Cecile Deleville, the 66-year old French lady (pictured above) who for twenty years almost daily found spiritual peace at Notre-Dame even amid the throngs of tourists who passed through every day, and how she is feeling and coping now.
It is here (link embedded): 'I feel lost': Notre Dame fire destroyed a spiritual home. 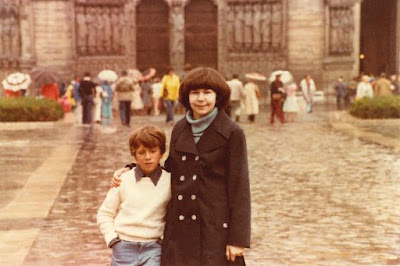 
OK, I intend to post a second entry a bit later tonight.
--Regulus
Posted by Regulus at 11:57 PM