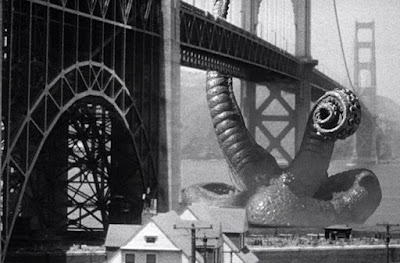 Giant octopus attacking the Golden Gate Bridge in the 1955 monster movie "It Came from Beneath the Sea"
The scene is when the giant, radioactive octopus attacks San Francisco at the climax of the movie.
Speaking of the San Francisco area, I still don't have a definite yes on whether I am going to Menlo Park for that conference later this month -- and if I do, I'm unsure if I will extend my stay by a few days to visit San Francisco. As I mentioned previously, visited San Francisco back in Oct 2006 and quite liked it.
******* 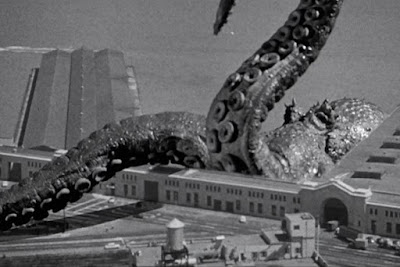 
I'm home tonight watching MeTV.
As alluded to above, the Svengoolie-hosted movie tonight is the 1955 film It Came from Beneath the Sea featuring a giant, radioactive octopus -- albeit one with six rather than eight tentacles -- terrorizing the Pacific coast of 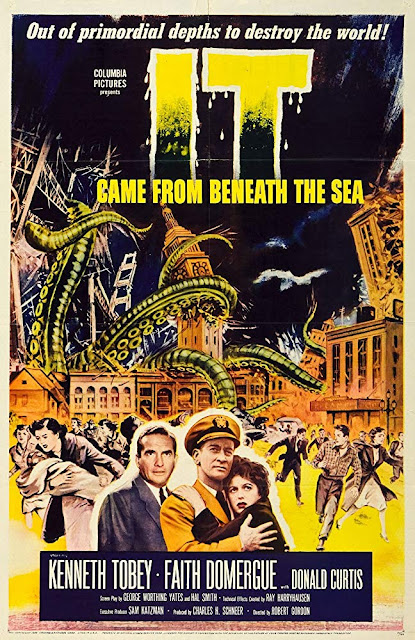 This is just a brief posting. I'm very tired tonight -- and don't really feel up to posting a Jukebox Saturday Night entry. (Updated 11:40 p.m.: OK, I ended up posting a JbSN edition anyway. 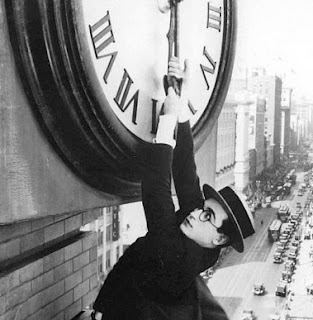 Tonight we undertake the annual fraud of shifting the clocks to return to daylight saving (not savings) time. Just what I need -- "losing" an hour.

Tomorrow, I'm to meet Mike G at Pentagon City Mall while his wife and son are at a play.


So, while waiting for my laundry to finish and watching an episode of Land of the Giants ("The Golden Cage"), I'd like to update this entry with some weather stuff … 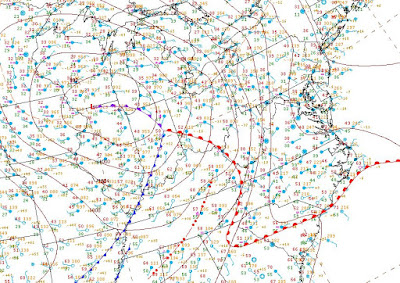 
It is a rainy, chilly night with temps around 40F. An broad occluding low pressure system centered near Chicago is dragging a cold front across the eastern United States with an attendant warm front head of it trying to push up the Eastern Seaboard but encountering the familiar cold air damming situation.
As the weather map above shows, there is also a squall line pushing across Tennessee. However, the severe outbreak is not nearly as bad as last Sunday's deadly tornado outbreak across northern Alabama.
Some radar imagery … 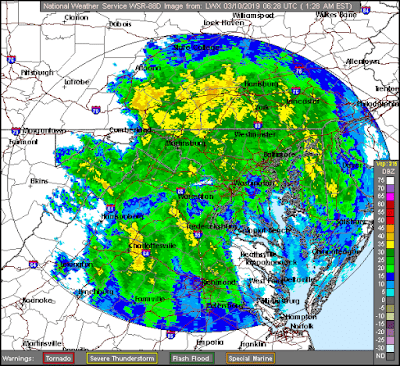 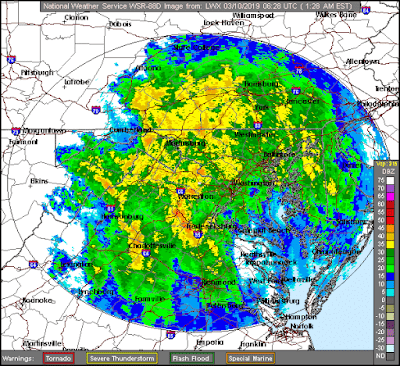 Sterling (LWX) NWS radar in standard composite mode, 1:28 a.m. EST 10 March 2019
I would have posted the looped base mode and composite images but the damn Sterling radar had one of those "missing image" frames that screwed it up.
*******

NECONUS composite radar mosaic looped 0508 - 0618 UTC 10 March 2019
The NNW-SSE oriented yellowish band of precipitation pushing across the Delmarva into southern New Jersey is what passed through the D.C. area a few hours ago.
******* 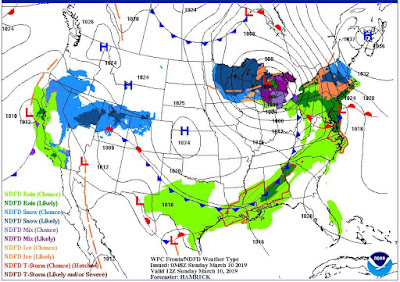 
The cold front should pass through and offshore by late Sunday -- ushering in a few days of tranquil and seasonal weather until the next system by Thursday.
End of Update and of Entry.