Returned From My San Francisco Combination Pleasure & Work Trip, But With Too Much To Do (and Thus Limited Upcoming Blogging) 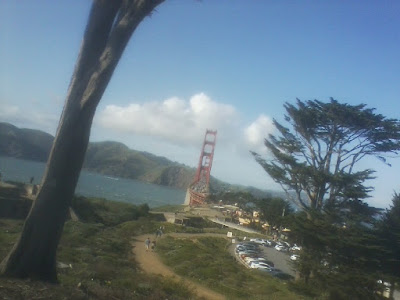 Golden Gate Bridge view from the Presidio, 4:31 p.m. March 23, 2019
This entry contains a small subset of the pictures from my San Francisco trip this past weekend.
*******


Back home tonight in my wee, lamp-lit apartment with my window air conditioner humming away. 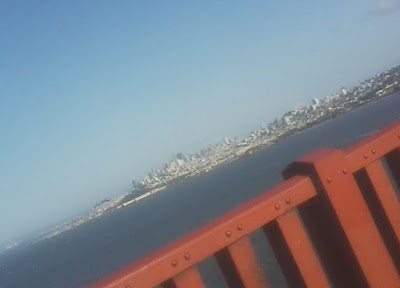 
While the San Francisco trip was overall quite enjoyable and the work portion (culminating in yesterday's workshop at SLAC in Menlo Park) went sufficiently well, the jet trek from DCA to SFO via DEN and then back across the entire wee hours of last night / this morning were both, well, grueling and highly unpleasant. This is the case even though I met and had good conversation with three very different people on two of the four flight legs. 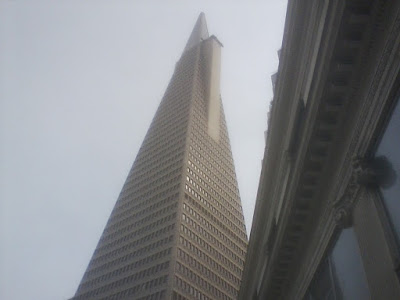 
This included lying on the floor of Denver International Airport's A concourse at 4:30 a.m. MT this morning and not getting any sleep for about 30 hours even while having to endure my particular carrier's Greyhound-bus like service and conditions. I don't think I want to deal with Frontier again.
There were a couple other issues, too, but I'm not going to go into those right now. 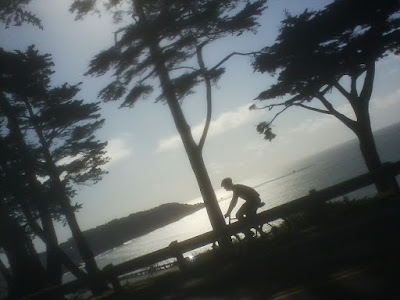 
I got back to DCA -- totally spent -- around 12:20 p.m. and was home in my apartment about an hour later. The weather was sunny, tranquil, and a bit chilly (temps only around 50F) for this early spring day. Interestingly, and welcomingly for my exhausted return, D.C. -- or at least the U Street corridor on my walk from the Metro station -- was unusually quiet and not-awful. 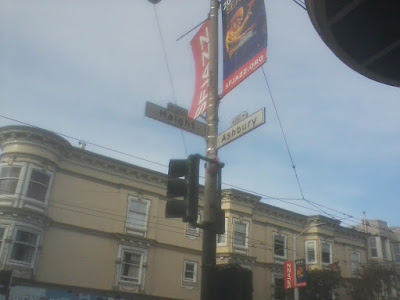 
I went to bed around 2:30 p.m. and slept until nearly 9 p.m. I got up and went to the nearby Yes! grocery store. I'm back home watching my usual MeTV nighttime line up (WKRP in Cincinnati, Hogan's Heroes, Carol Burnett and Friends, and maybe Perry Mason, although I need to be back asleep in a couple of hours).
In the meantime, I'm going to make some dinner, shave and shower, and then going back to bed by midnight. I have to get up by 6 a.m. for another all-day meeting event -- this one in Crystal City rather than on the other side of the country but I still need to be there by 8 a.m. My plan is go to the gym (finally) tomorrow night. Things should start to get back to normal by Friday. 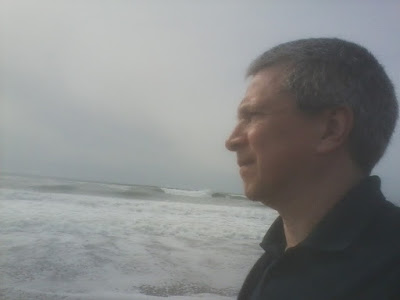 Yours truly beside the roiled, chilly surf of the Pacific Ocean, San Francisco, Calif., 4:01 p.m. March 24, 2019
On Sunday, I took a conveniently timed Muni #5 route bus from the Financial District to the end of the line near the beach at Fulton Street. I walked all the way back via Lincoln Way and then through Haight-Ashbury. (It was a bit too late in the day to try to figure out how to navigate Golden Gate Park.)
******* 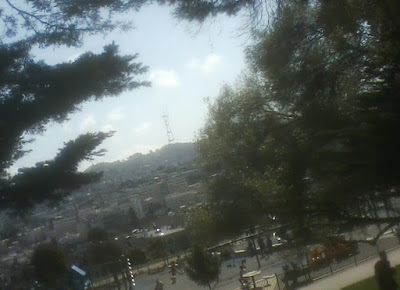 View of Sutro Tower from Lafayette Park, San Francisco, Calif., 2:38 p.m. March 23, 2019
This was taken on Saturday during my 10 to 12 mile walk about that including a trek through the Presidio and back and forth over the Golden Gate Bridge. It was a stunningly beautiful day.
*******


However, I need to have the notes from both meetings written up in short order (the SLAC one by early next week). For this reason, blogging will be a bit uncertain even though I have scores of pictures I want to post. 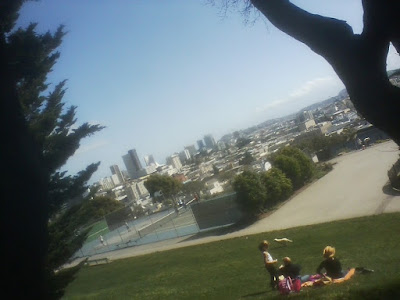 
The other issue is that I have a lot of work to do during the month of April to include eight detailed financial monitoring reports. I need to do this before my dad's upcoming visit from Florida at the end of the month during which time I will take off several days from work. We are going to New Jersey -- to our home area of Long Branch and Asbury Park -- in what will likely be the last time we ever do such a thing. 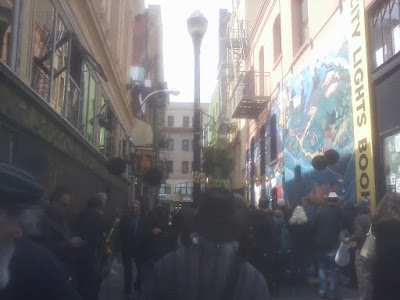 Side street on a Sunday afternoon in San Francisco, Calif., 1:04 p.m. March 24, 2019
I think this is in the North Beach section of the city. The occasion of the crowd were a series of book and poetry readings on the 100th birthday of the poet beat generation poet, painter, and social activist Lawrence Ferlinghetti. Unexpectedly, I ended up at a reading at the Café Zoetrope where I was having lunch at the little bar.
******* 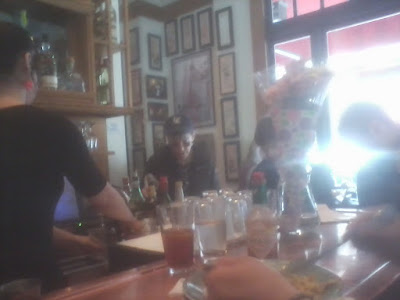 The bar at Café Zoetrope, San Francisco, Calif., 1:10 p.m. March 24, 2019
My lunch was delicious -- and the poetry readings in honor of Ferlinghetti were really good. I never do stuff like attend poetry readings, and I'm really happy I ended up at this event.
*******


OK, I'm signing off for now. Again, my blogging schedule in the next week is going to be uncertain owing to a lot of work-related things I have to do, but I do intend to post the remainder of my SF area pictures.
--Regulus
Posted by Regulus at 11:59 PM