* With apologies to Peggy Lee, Glenn Miller, and everyone else involved in "Elmer's Tune." 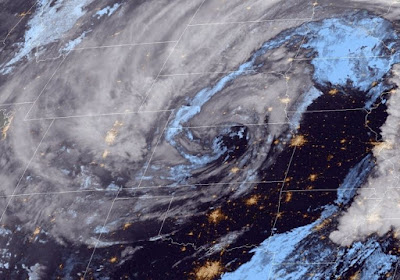 
Home tonight ensconced in my apartment and watching the ancient but enjoyably comforting MeTV lineup of old shows to include WKRP in Cincinnati, Hogan's Heroes, Carol Burnett & Friends, and Perry Mason (and, if I like the episode, The Twilight Zone).

A loop of the GEOS-East CONUS GeoColor satellite frames (to include the lead image above) but expanded to the full eastern and central CONUS over the course of about a three-to-four hour period ending around 0300 UTC.
*******


The Perry Mason episode is "The Case of the Poison Pen-Pal." I love Perry Mason. As ever with these episodes, I go to IMDb to look up who's who including anything especially noteworthy about their lives -- and, of course, who if anybody, in the episode is still alive. 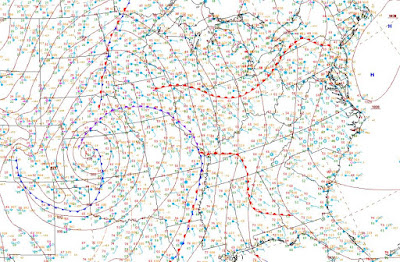 
This follows a day at work in which I made plans for my upcoming work trip to the Bay area at the end of the month (and why I can't stay beyond the one-day workshop, but might go ahead of time). Thereafter, I took the Metro back to U Street and stopped at Sudhouse (a place I sometimes stop after work and sort of enjoy). After two gin fizz drinks and a conversation, I walked to the Yes! organic market grocery store and then coming home, where I am now. 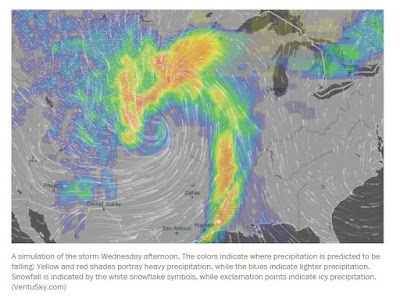 CONUS air pressure-based streamlines and precipitation intensity, valid local afternoon 13 March 2019
This is one of a set of images I captured from the first of the two CWG entries linked below.
*******


However, and as the first four of this entry so far strongly suggest, this is not a personal update but rather a dedicated weather-related posting. Specifically … 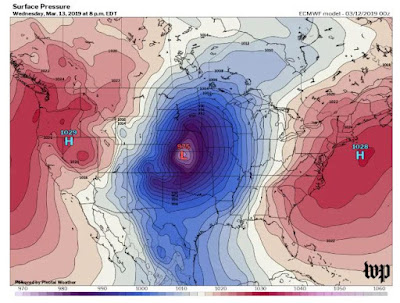 
A geographically ginormous (synoptic-scale), very deep, and highly energetic low pressure system -- dubbed "Winter Storm Ulmer" by the Weather Channel, but not the National Weather Service -- is sprawling across the central United States. So, yes, one in fact can say: "It's just Ulmer's tune …"
BOOOO!! 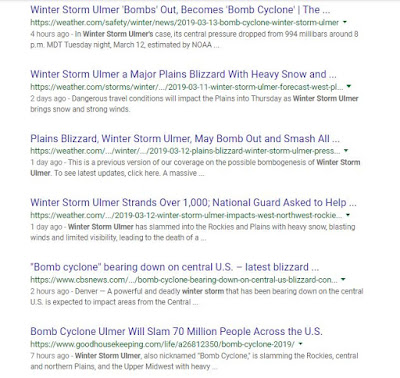 
The system rapidly intensified ("bombed out") as it pulled out of the Colorado Rockies with a central pressure dropping (as of 0Z 14 March) to 974 millibars. This includes a reported all-time record low pressure of 974.7 millibars (28.78" Hg) in Dodge City, Kan., according to the NWS. Winds at Dodge City Regional Airport (KDDC) gusted to 54 mph within a couple hours of that point (not incredibly strong near the low center, but as a broad baroclinic low, this isn't a surprise).
To be clear, the bombing out of an extratropical cyclone deep over a continental landmass (even with the help of the Gulf of Mexico) rather than an oceanic baroclinic zone is somewhat unusual.


As "Ulmer" -- i.e., the low -- heads for the Great Lakes region, the system is bringing a full March panoply (potpourri??) of weather from howling blizzards to severe thunderstorms and flooding rainfall plus lots of wind.


The system will peter out as it reaches the eastern United States as it encounters rising heights and the energy more or less just shears out. Here in the D.C. area, there is a chance of rain showers as a weakened frontal system passes through on Friday. However, we are hardly lacking for rainfall here in the Eastern U.S. the past 9 to 12 months.


Here are a pair of Capital Weather Gang entries (links embedded) -- and ignore the comments since it's the usual nihilistic "tribal" horseshit flame warfare of our time.
12:37 p.m. EDT March 12, 2019 Central U.S. 'bomb cyclone' to generate blizzard, flooding and severe storms midweek.
This entry was updated multiple times -- but I think this is the final version. 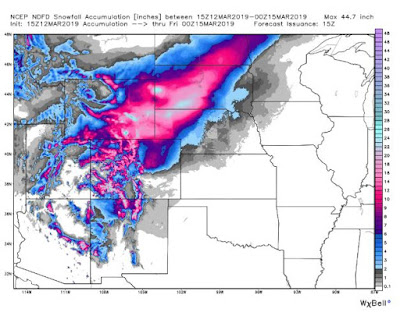 
5:10 p.m. EDT March 13, 2019: Historic 'bomb cyclone' sets off severe storms, flooding, and a 'dangerous' blizzard in Plains and Midwest.
This entry might be updated again -- including the title.
A pair of NWS weather maps with advisories but without legend … 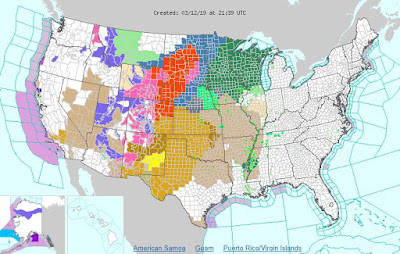 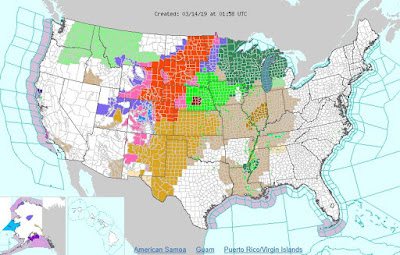 
For the remainder of this entry, here are a series of NWS/WPC/NDFD Short Range Forecast surface weather maps showing weather features, isobars, and type and intensity of precipitation. The still images were produced last night (about 24 hours ago). It is interspersed with a portion of the content from the second CWG entry linked above (minus any inline links). 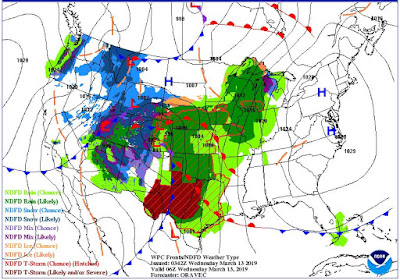 
An explosively intensifying winter storm centered over the Colorado Front Range continues to unleash a potpourri of extreme weather across the Plains states and Upper Midwest. The hurricane-force system has combined the worst weather of all four seasons into one — from a string of violent, tornadic thunderstorms to damaging winds, severe blizzard conditions and even flooding. 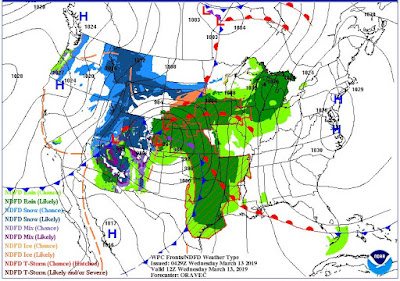 
It’s a storm for the record books, strengthening from a run-of-the-mill weather disturbance into a historic cyclone in 24 hours. Its central pressure dropped 33 millibars from Tuesday to Wednesday, meeting the criteria of a meteorological “bomb.” The storm made this transformation over land, rather than water, which is rare.
The National Weather Service described it as "incredible" and a "Great Plains cyclone of historic proportions." 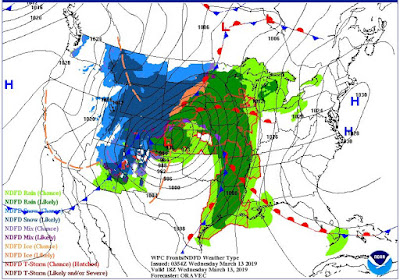 
On Wednesday morning, the storm’s pressure had dropped to the equivalent of a Category 2 hurricane. Hurricane-force gusts hit Dallas (78 mph) as well as Denver (80 mph) and Colorado Springs (97 mph), which were also enduring blinding snow. A storm this extreme triggers extreme impacts, which were predicted to intensify into Wednesday night. 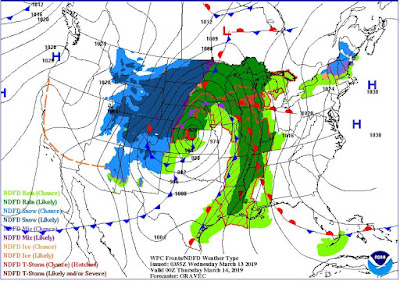 
Below is a looped image of a set of the same category of maps as above. To be clear, I didn't realize that it is possible to download them as an animated gif the looped WPC Short Range Forecast series of maps from this site, so the following four are still images:

Looped at 6Z, 12Z, and 18Z 13 March, 0Z and 12Z 14 March, and 0Z 15 March 2019
The energy shears out as it bumps into that big-ass western Atlantic ridge. Remember, Dear Children: High pressure (geopotential height) ALWAYS wins out. It's like a lean, mean sprinter running into some 350-pound guy: He can only go around him, not bowl him over.
OK, that analogy isn't quite right …
Anyway, if you're interested, you can watch "Ulmer" ride up on the western side of that slow-moving ridge and die over Greenland 4 to 5 days hence …


The clash of seasons has been dramatic in a number of spots, but few more so than Denver. Now under the blizzard warning, the Mile High City hit 62 degrees Tuesday before plummeting below freezing Wednesday morning as rain transitioned to heavy snow.
Accumulation of six to 12 inches was forecast as temperatures fall through the 20s and winds rage. 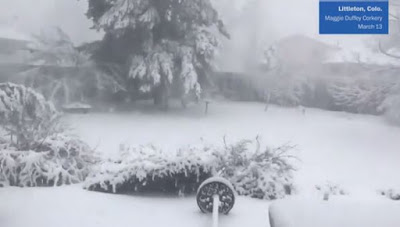 Screenshot from a suburban backyard in Littleton, Colo., on March 13, 2019 during the blizzard portion of the storm.
*******


And with that, I shall end this entry. My plan is to post a regular garden-variety update tomorrow night. If not, the next entry will be Saturday night.
--Regulus
Posted by Regulus at 2:01 AM