First up, something swinging hot …

"(I'm Gonna) Stomp, Mr. Henry Lee" as performed by Eddie Miller and His Orchestra (1944)
This song was featured in Bryan Wright's most recent Shellac Stack podcast -- which had as its theme a set of 78s involving the name "Henry" in the song titles. The song itself was composed by Jack Teagarden.
*******


Next up, a nice piece by an artist I've featured a number of times over the years …
"Sweet Serenade" by Jonathan Butler from his Living My Dream release (2014)
The images in this video version are stated (by the poster) as being of Playa de las Marañuelas in Arguineguín, on Gran Canaria, July 2014.
*******


Next, I'd like to feature two songs from a certain electronic duo that -- based upon a quick term search of my blog -- I have never previously featured (and so I'd like to change that) …
"Walking on a Dream" by Empire of the Sun from the duo's debut album of same name (2008)
This video was shot in Shanghai. (Does that mean they were shanghaied …??? BOOO!)
And next up …

"Alive" by Empire of the Sun from the duo's album Ice on the Dune (2013)
This song is perhaps their most popular one. As for the video, The Keeper of All Knowledge explains it thusly: 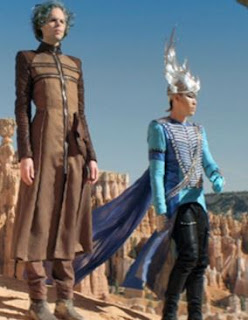 The music video for the song has acquired widespread notice. Directed by Alex Theurer and Charles Scott from Kelvin Optical, Inc., a division of J.J. Abrams' Bad Robot Productions.

It features science fiction costumes and was filmed in Bryce Canyon National Park and the redwoods of California.


The animation starting at (0:45) depicts both singers standing on a rock tower, which is Spider Rock in Canyon de Chelly located on the Navajo Nation in Arizona
*******


OK, that's all for now. See my previous entry for an update.
--Regulus
Posted by Regulus at 11:58 PM