A Saint Valentine's Day Message from Earth to an Interstellar First Messenger: ‘Oumuamua, Please Come Back. We Need You.

Animated gif showing a schematic of interstellar visitor ‘Oumuamua's all-too-brief visit into and out of the inner Solar System in late 2017.
******* 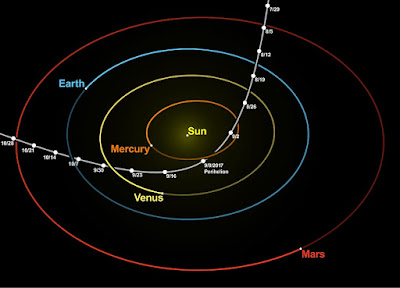 Two-dimensional schematic of ‘Oumuamua's orbit at perihelion around the Sun in 2017 with dates and orbits of inner planets.
*******


I refer, of course, to the interstellar that tore through the inner Solar System in late 2017 and whose name in the Native Hawaiian language translates roughly as "First Distant Messenger" or "First Messenger from A Far" -- so named because it was discovered using the Pan-STARRS telescope at Haleakalā Observatory on Maui in the Hawaiian Islands. 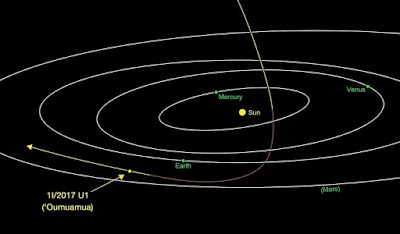 
And, yes, that's an ʻokina -- or glottal stop, NOT an apostrophe (though it resembles an upside down apostrophe). (It was going to be Rama after the Arthur C. Clarke novel Rendezvous with Rama, but Hawaiian cultural sensitivity appropriately prevailed.) 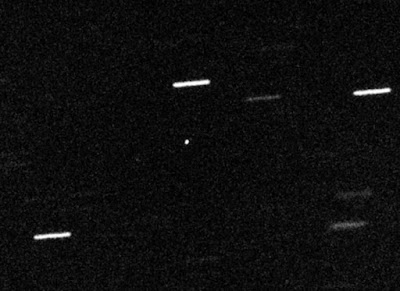 Caption: ʻOumuamua, imaged here with the William Herschel Telescope on 28 October, is seen as a stationary light source in the center of the image. Background stars appear streaked because the telescope is tracking the rapidly moving object.
*******


Discovered by Robert Weryk on Oct 19, 2017, ‘Oumuamua was already 40 Earth days beyond its closest approach to the Sun and 33 million km (21 million miles) from Earth (or 85 times the Earth-Moon distance).
YouTube video animation of ‘Oumuamua's journey into and through the inner Solar System as the object whips around the Sun -- as seen from its moving perspective.
******* 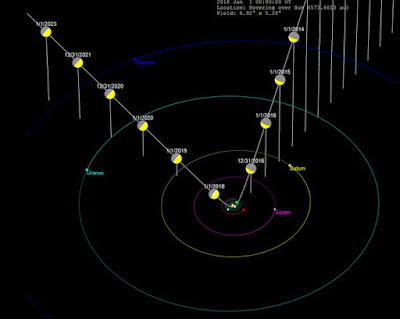 Schematic diagram of the hyperbolic orbit of ‘Oumuamua above the Solar System with dates.
*******


To be clear, the skyscraper-sized ‘Oumuamua displays no obvious comet-like properties and instead appears to be a very queer-looking cigar-shaped asteroid undergoing some sort of chaotic spin. 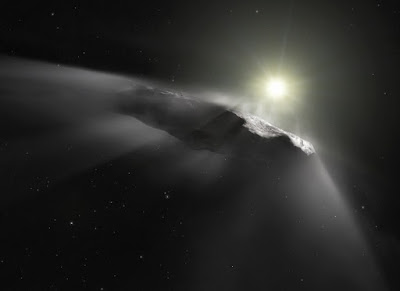 Illustration of ‘Oumuamua displaying comet-like outgassing as it approaches the Sun.
*******


As for all this weirdness, let me get to the point: I totally, too, would love for ʻOumuamua to be an alien probe -- even a lost, dead one of some sort … 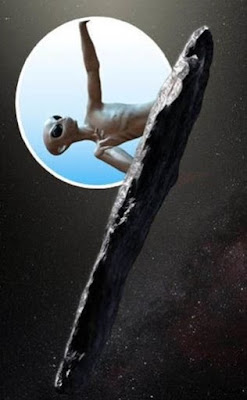 To that end, here are some articles with links:

Interstellar Object ʻOumuamua Could Be a 'Monstrous' Corpse of Comet Dust --Space.com, Feb 5, 2019


A bizarre interstellar object called ʻOumuamua continues to perplex astronomers a year after it vanished. Here's why a few scientists still wonder if it was alien. - Business Insider, Feb 2, 2019
’Oumuamua as seen over the course of several days by the William Herschel Telescope in late 2017; source here.
*******


About that matter of those scientists who wonder if it is an artificial structure constructed by some extraterrestrial civilization, here is the article from the arXiv electronic preprint (e-print) repository (link embedded): COULD SOLAR RADIATION PRESSURE EXPLAIN ‘OUMUAMUA’S PECULIAR ACCELERATION?
By Shmuel Bialy and Abraham Loeb, Harvard Smithsonian Center for Astrophysics
Accepted for publication in the Astrophysical Journal Letters
ABSTRACT


‘Oumuamua (1I/2017 U1) is the ﬁrst object of interstellar origin observed in the Solar System. Recently, Micheli et al. (2018) reported that ‘Oumuamua showed deviations from a Keplerian orbit at a high statistical signiﬁcance. 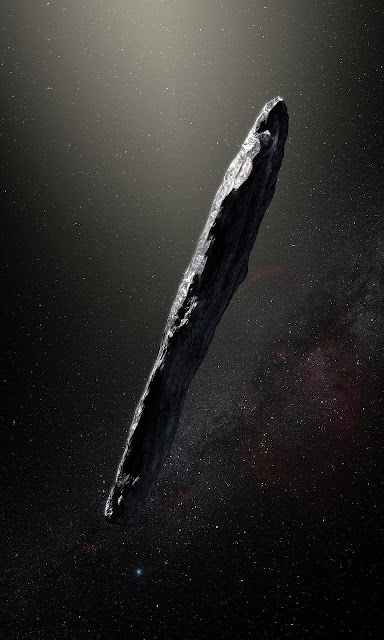 The observed trajectory is best explained by an excess radial acceleration ∆a ∝ r−2, where r is the distance of ‘Oumuamua from the Sun. Such an acceleration is naturally expected for comets, driven by the evaporating material. However, recent observational and theoretical studies imply that ‘Oumuamua is not an active comet.


We explore the possibility that the excess acceleration results from Solar radiation pressure. The required mass-to-area ratio is (m/A)≈0.1 g cm−2. For a thin sheet this requires a thickness of≈0.3−0.9 mm. 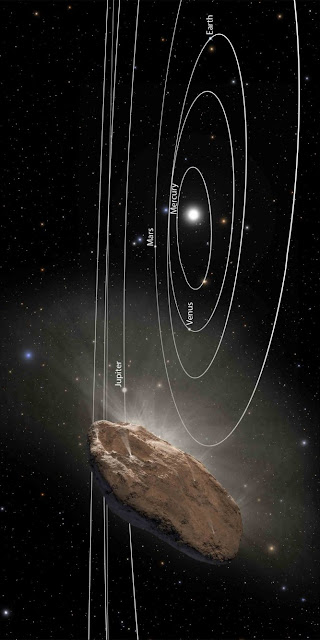 We ﬁnd that although extremely thin, such an object would survive an interstellar travel over Galactic distances of ∼5 kpc, withstanding collisions with gas and dust-grains as well as stresses from rotation and tidal forces.

We discuss the possible origins of such an object. Our general results apply to any light probes designed for interstellar travel.


No matter what it is, all I have to say is: Come back ‘Oumuamua and just enter a lazy orbit around the Sun … We, the Children of Earth, love you. We need you. No, really.
--Regulus
Posted by Regulus at 1:22 AM