"My God, it's full of stars!": Imaging Individual Stars of the Andromeda Galaxy, Courtesy the Hubble Space Telescope and PHAT Project 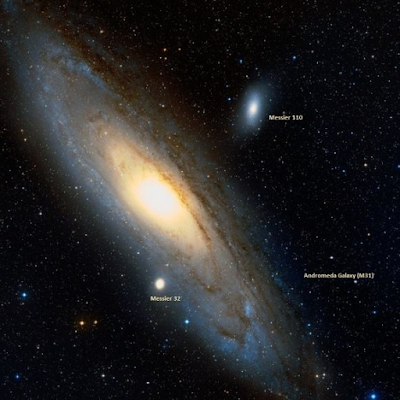 
Just about 4 years ago at the 2015 winter meeting of the American Astronomical Society in Seattle, an image was released of M31, also known as NGC 224, but most famously known as the Andromeda Galaxy. 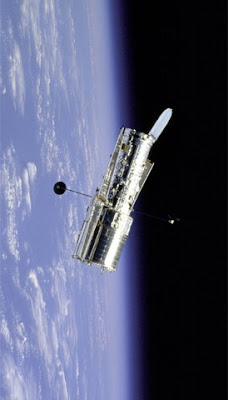 This was no ordinary image. It was a series of Hubble Space Telescope (HST) images -- thousands in all associated with the Panchromatic Hubble Andromeda Treasury ("PHAT") project -- of a portion of the Andromeda Galaxy down to the level of individual stars.

Yes, INDIVIDUAL STARS in the Andromeda Galaxy, the Milky Way Galaxy's larger sister galaxy, as seen across a gulf of 2.5 million light years of space. 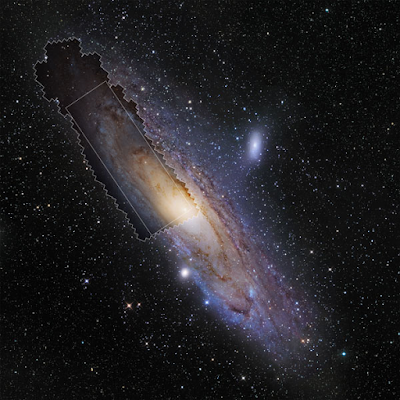 Caption (from article link below): This wide-field view shows the Andromeda Galaxy along with its companion NGC 205 (upper right). The irregularly edged swatch is the extent of the PHAT survey, which over 39 months took thousands of high-resolution images of Andromeda using the Hubble Space Telescope.
*******


The series of images were captured by the Hubble Space Telescope over a nearly two year period between Dec 2011 and Jan 2013 and the resulting composite mosaic captures an estimated 117 million stars.
This is a mindboggling number that itself only represents about 0.1 percent or the approximately 1 trillion stars. The mosaic itself only represents a portion of the Andromeda Galaxy (see image above).

A vertically-arranged image of the rectangular subset of the PHAT project field of the Andromeda Galaxy.
The yellow box is a region that I selected into which to zoom. What follows below is a series of ten such zoomed images -- ending with one particular star that, at least in my imagination, is a Sun-like star. (To be clear, my zoomed regions are all at a right angle to the image above but "up" and "down" don't have much meaning when looking so far across space.)
******* 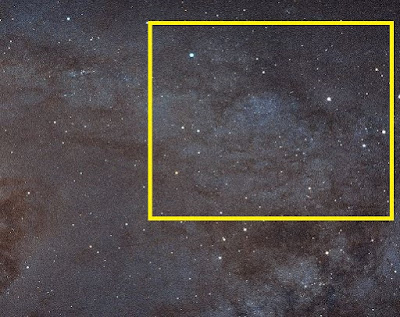 Zoom region 1
I picked a region that is about 3/4 out from the Andromeda's galactic center and itself centered on a cluster of bright blue giant stars.
*******


The Andromeda and Milky Way Galaxies, along with the Triangulum Galaxy (M33 / NGC 598), are the three largest members of the Local Group of galaxies. Consisting of at least 54 galaxies (maybe more), nearly all the Local Group members are satellite galaxies of Andromeda or the Milky Way (Triangulum is suspected of being a large satellite of Andromeda). The Large and Small Clouds of Magellan ("Magellanic Clouds") are the two most well-known satellite galaxies of the Milky Way. 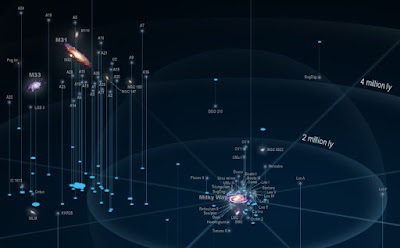 Close up schematic of the Local Group showing the Milky Way, Andromeda, and Triangulum Galaxies and the swarms of satellite galaxies.
*******


Only the most powerful telescopes (ground-based, ground-based arrays, and space-based) can make out individual stars in galaxies outside the Milky Way and its satellite galaxies. 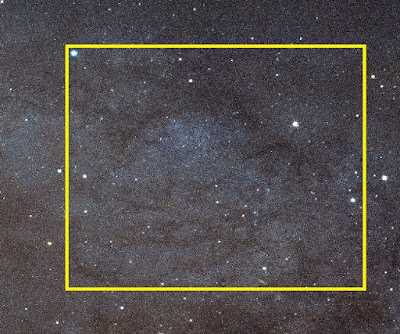 
For the most part, the galaxies that we see spread across those "deep field" images of space are not individual stars but rather the amalgamation of countless billions of stars in each of these "island universes." . 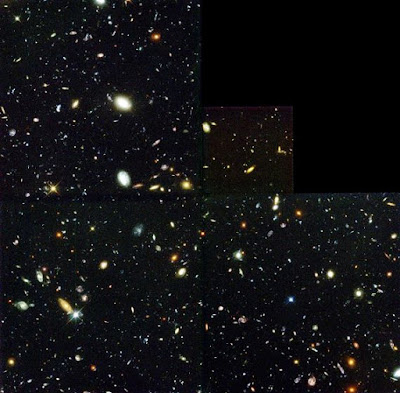 
The resulting illuminated "fog" of light is what we see as distant galaxies and includes all the familiar shapes such as spirals / pinwheels, barred spirals, elliptical "orbs," smaller / open clusters, and irregulars and hybrids. The shapes are determined by their past and ongoing interactions with other galaxies and the resulting tidal forces
The Andromeda Galaxy is a spiral galaxy while the Milky Way Galaxy, once thought to be a spiral,  is now surmised to be a barred spiral. Here are examples of the two types  … 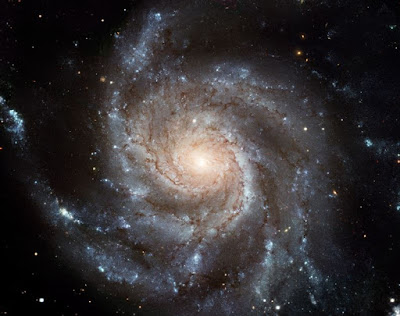 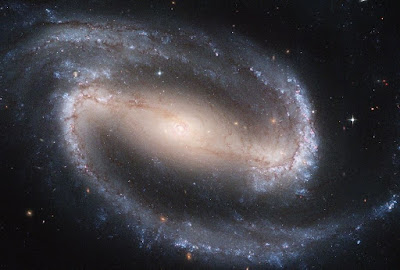 The barred spiral galaxy NGC 1300 located about 61 million light years away in the constellation Eridanus.
NGC 1300 is about the same size as the Milky Way. It is possible that this is what the Milky Way would look like at a sufficient distance outside of it.
*******


Anyway, continuing with our journey into the Andromeda … 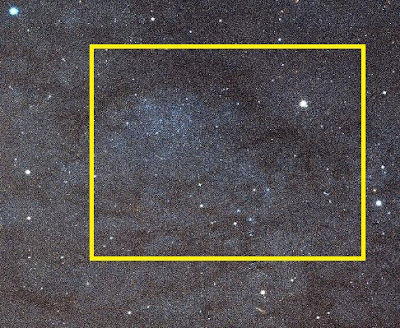 
These galaxies appear as just the tiniest smears of light in smaller telescopes while in the giant, powerful telescopes, it is possible to see the fuller shapes -- with the fog of light dim at the edges and more brilliant in the center where countless tens of millions of stars in a given galaxy form the galactic cores (concealing but also suggesting central supermassive black holes). 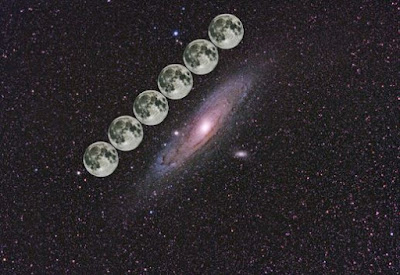 Andromeda Galaxy and the Full Moon sky size comparison
To be clear, and as the above image shows, the Andromeda Galaxy is itself "large" as seen from Earth -- except it is so faint, that we can't see it except in the darkest, clearest night sky, and even then you're only seeing the very brightest part of the galactic core.
******* 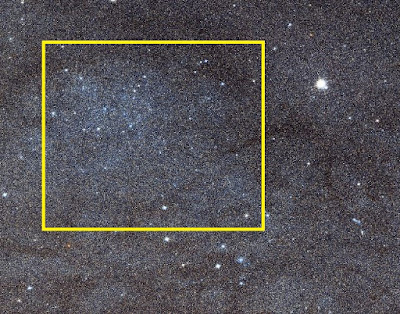 
But seeing individual stars in galaxies outside our own Milky Way and its attendant swarm of satellite galaxies is just not possible -- EXCEPT and UNLESS there is a supernova that flares for a brief period of time, but even these quickly (on the order of months) disappear into the background illuminated fog of their host galaxies. 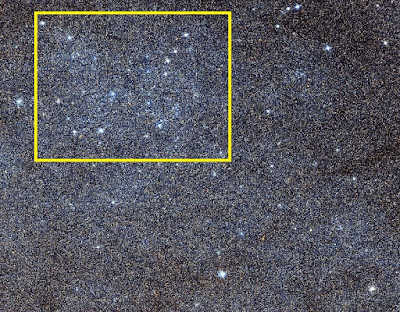 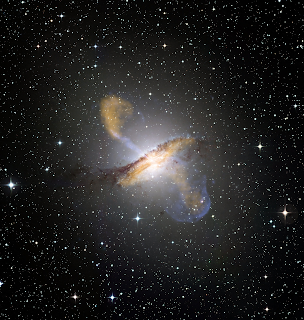 Visible light signature of X-ray jets from the supermassive central blackhole of the galaxy Centaurus A.


So, the fact that the Hubble was able to image individual stars -- not just the blue-white giant and red supergiant ones, but some basically like our dear Sun, Sol -- across a gulf of 2.5 million light years is, indeed, mindboggling. 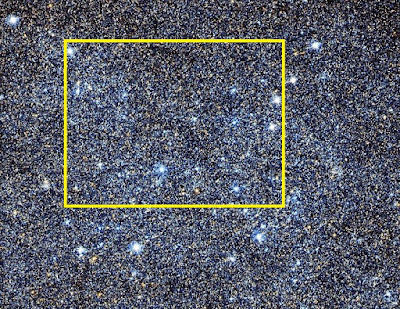 
But as this Sky and Telescope article dated Jan 6, 2015 explains, the poster presented at that 2015 meeting was 10 feet by 25 feet -- and even that doesn't do justice to what Hubble and the team achieved. 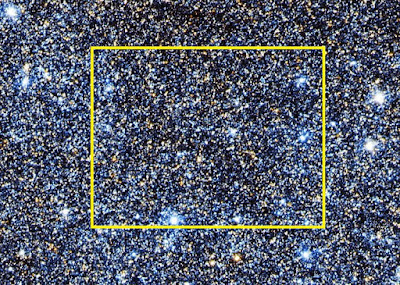 
The Hubble Space Telescope high-res image above captures a slice of Andromeda spanning 48,000 light-years, from bulge to outskirts. Its 1.5 billion pixels would need 600 HD television screens to display to full effect. 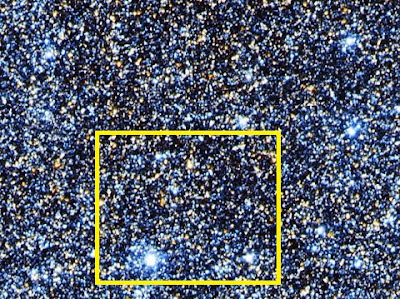 
Hubble began studying Andromeda in December 2011 as part of the Panchromatic Hubble Andromeda Treasury (PHAT) project led by Julianne Dalcanton (University of Washington). The imaging project finished in November 2013, and the team released the result on January 5th at the meeting. The final image includes 12,834 shots from more than 400 pointings taken through ultraviolet, optical, and near-infrared filters. (The photo above shows only the visible-light view through the blue and red filters, a mosaic of roughly 3,700 optical images). 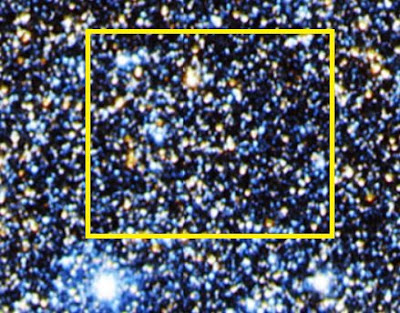 
The article includes a link to the European Space Agency's zoom tool that allows you to hone anywhere you like to see those 117 million stars -- not to mention "a couple thousand star clusters and star-forming regions as well as dark, twisted silhouettes traced by complex dust structures."
It's best if you zoom in somewhere in the mid-to-outer region of the main image since nearer to Andromeda's galactic center, there are so many stars that it just becomes a brilliant fog of light.
The direct link to the zoomable tool is:
https://www.spacetelescope.org/images/heic1502a/zoomable/ 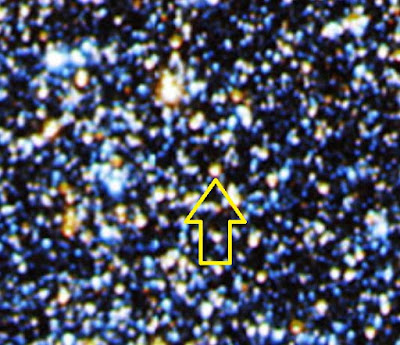 Zoom region 10
I've selected an individual star that, as I mentioned above, I would like to think is a Sun-like star … with its own retinue of planets, that just one of which might harbor life, if not as we understand it, life nonetheless …
*******


Because you are seeing these stars from so far away -- and because the distance between any of the stars in the zoomed-in field of vision is small compared to the 2.5 million light year gulf separating us from them -- the stars appear very close to each other when, in fact, there are light years of separation in between even two arbitrarily close stars.
Much of the distance between even the closest two stars is taken up by their respective star-shining glare. 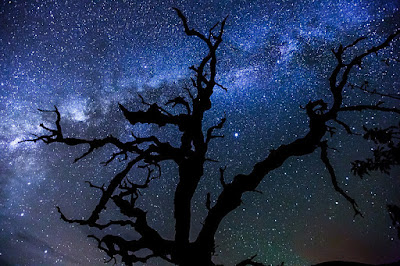 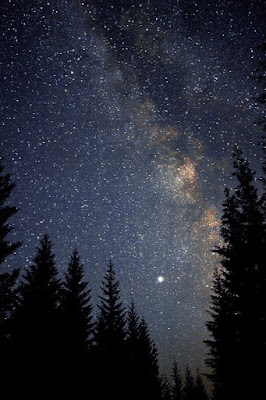 Also, as in any image of a distant galaxy, there are brilliant stars that are actually way, way close in the foreground -- i.e., stars in our own galaxy -- since our vantage point is inside our own little "island universe" known as the Milky Way.


And you yourself as the observer are far smaller than any of those grains of sand. 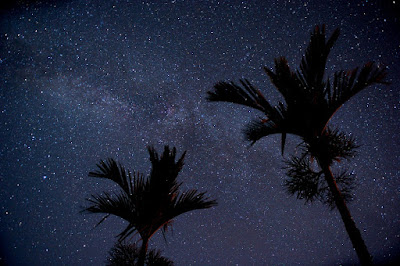 To have achieved this is truly astonishing, and I remain in awe of the Hubble Space Telescope and all that it has shown us.
--Regulus
Posted by Regulus at 11:53 PM