Some Late Night Notes from the Far Edge of the Motor City -OR- "Put Your Hands Up 4 Detroit!" 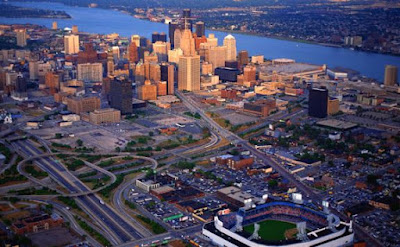 Aerial view of downtown Detroit. No, I didn't take this picture. I found it online.
When you see my pictures below, you'll understand why I found the one above as a lead image.
*******


Here I am in suburban Detroit at this night time hour.
Specifically, I am here in a 6th floor suite of the Embassy Suites by Hilton - Troy / Auburn Hills in a suburban-to-exurban no-man's-land about 15 miles north northwest of Detroit in what is basically the equivalent of "visiting" Washington. D.C., by staying only in Gaithersburg along I-270.
Interestingly, from the south-facing bedroom window, I can see across the miles to the Detroit skyline. 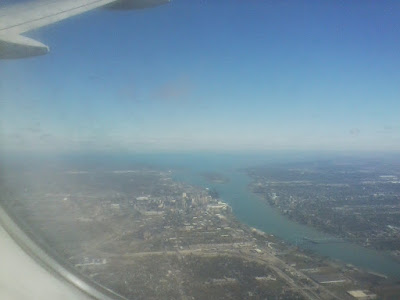 
The flight from National Airport to here was fine but going through security was the usual crap. I ALWAYS seem to get nabbed for extra security pat down -- which today was nothing less than a public groping by a borderline rude young ethnic Ethiopian or Eritrean guy.
About that, and at least at DCA, much of the TSA work is done by a sort of Ethiopian and/or Eritrean mafia … Or maybe it's a super-extended family and public works project. (They also run the airport's parking garage racket.) 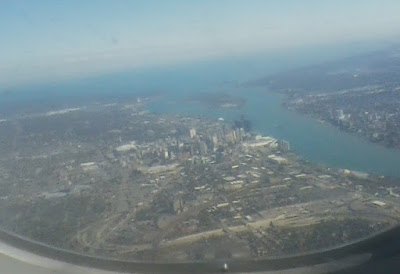 
The fact that I had on cargo pants with multiple pockets made things worse -- as if I am intentionally keeping a piece of paper in a random back or side pocket to cause air travel mayhem.
I'm not very good with those goddamn full-body scanners (and all their images that undoubtedly end up on the Dark Web for general diversion) -- perhaps that's the issue -- but the pat down part is even more annoying because they expect you to be happy while they're doing it and cop an attitude if you aren't.
There were no screaming babies or shrieking two-year-olds on the one-hour flight. 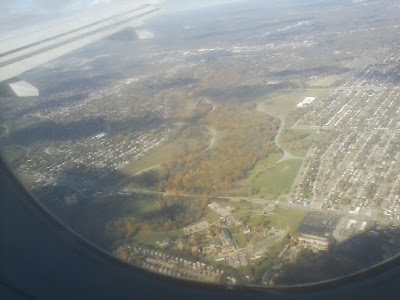 
My journey from DTW to here was in something called a Metro Cab. I had a cab driver named Ade. A native of Ghana, he has lived in the Detroit area for 30 years. I was very lucky to get him as a cabbie. Of note, the journey on a crowded pair of interstates was 41 miles and cost $88 (before tip).
I got to the hotel around 3 p.m. and immediately went to the small workout room where I spent an hour on the treadmill and did a bit of weightlifting (there wasn't much of the latter, just dumbbells of various weights). The hotel has a pool in a sort of solarium-like back room, and that was nice.
I had dinner and some drinks at the bar and now I'm in and ready for bed. The gimmick here is three free drinks per night during an every-day-of-the-week evening "reception" happy hour.
This is the one and only night I will be in this hotel as I have to be at the automotive technologies meeting tomorrow (at a nearby facility associated with Michigan State University). I need to be there by 7:30 a.m., which means being up at the ass-crack of dawn. 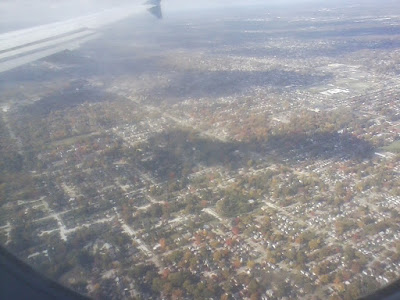 Another view descending over the Detroit area inbound to DTW, 1:39 p.m. Oct 29, 2018
There were some actual decent fall colors in the tree foliage here. It's been a very strange year for the lack of such color across the eastern United States.
*******


A colleague of mine is here and she rented a car. I'm going to catch a ride with her to the airport tomorrow, although we might try to see one museum in Detroit if there is time. Her flight back to D.C. is around 5 p.m. while mine isn't until 8:30 p.m.
Clearly on an upward trajectory after decades of decline into the a near parody of a collapsed American city, Detroit appears to be on a path to becoming America's first post-post-apocalyptic major city.
OK, I'm signing off now. I'll try to post an entry tomorrow night, but as I probably won't get home until 11 p.m., that seems unlikely which means late Wednesday or early Thursday.
--Regulus
Posted by Regulus at 11:41 PM