Saturday Evening Post for October 27th, 2018: A Tranquil Fall Night in a Terrible Time -OR- Trump as Symptom and Cause of a Dystopian Era 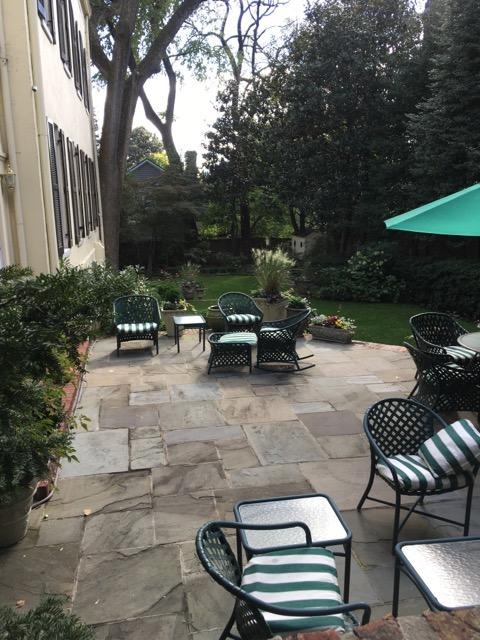 Hidden yard behind a wall along Q Street NW, Georgetown, Washington, D.C., Oct 21, 2018
Aydin took this picture was we were walking last Sunday to Martin's Tavern for lunch.
*******


Apologies for no updates on Thursday or Friday.
As an update, last night, I went to the National Press Club with a friend and coworker who is a member. There was a special event there for a subset of members who have been members for at least 25 years. 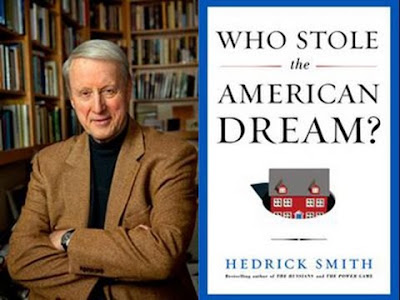 The guest of honor was the highly distinguished journalist Hedrick Smith. Smith gave a really good speech that gets into the thesis of his new book Who Stole the American Dream? and to discussing hopeful signs that he describes as a riptide running against all the ugliness of our current time. 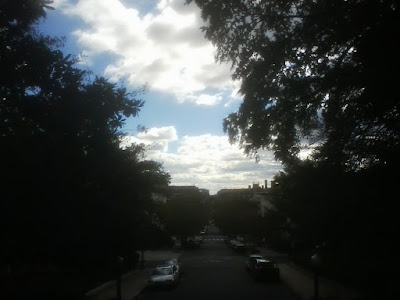 
This includes efforts at undoing gerrymandering and local-and-state-level efforts against the travesty of Citizens United and malevolent consequences of dark money. He has an upcoming documentary to air on MSNBC.
As an aside, I had no idea is 85 years old. I thought maybe he was in his mid 70s. 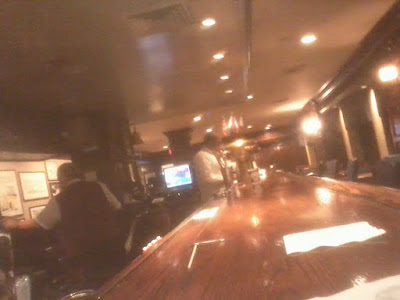 
Thereafter, my friend and I had a drink at the club bar and then we went to the Round Robin bar at the Willard InterGalactic InterContinental. After we parted, I went to Hamilton and Old Ebbitt for a bit and then walked home. 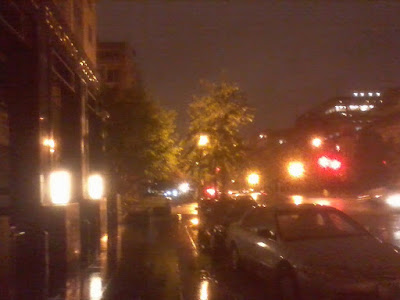 
It was a rainy, breezy, chilly night thanks to a coastal nor'easter. In the end, we had about 1.2 to 1.4 inches of rain across the D.C. area -- adding to the hefty yearly surplus.
I got home and before going to bed (around 4 a.m.), I watched on YouTube Bill Maher's opening monologue on his Real Time episode last night. I've embedded it in this entry directly above. 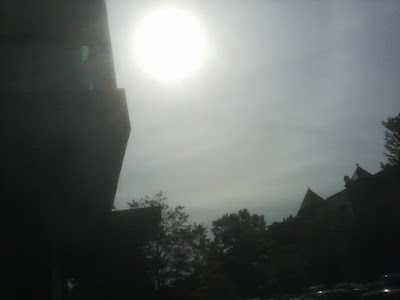 
I didn't get up until about 4 p.m. -- after hours of living that other, highly complicated, agitated, and varied dream-world life. It was too late for me to follow my weekend plans, which was to reverse my usual Saturday and Sunday schedule (since I have to go to Detroit on Monday for work). This would have entailed the former my free day and the latter my chore day. 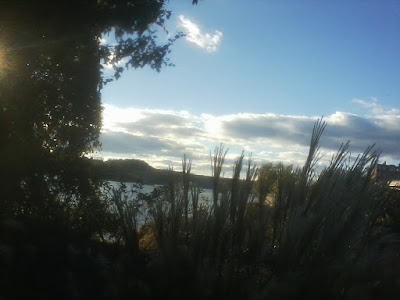 
However, I really needed to do my laundry to include bedding. So I stayed in and did six loads of laundry. I also gave myself a haircut (a shearing, as it were, with the clipper I own), showered and shaved, and got all fresh as a daisy. I haven't actually been outside today. I'm home now watching the MeTV Super Sci Fi Saturday Night lineup. 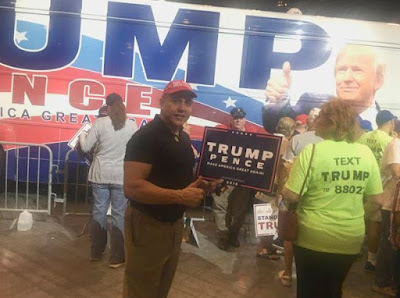 
I don't really want to turn this entry into a commentary about ongoing events -- either the impending midterms that will determine whether or not Trump is finally systematically checked or the toxic political climate replete with violence that Trump has fostered as cause and of which he is also a symptom. 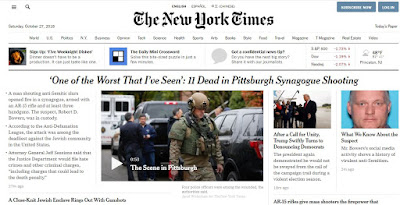 
However, I have to mention the horrifying synagogue massacre of 11 people in Pittsburgh today by some neo-Nazi piece of shit using the NRA's favorite psychosexual toy, the AR-15. 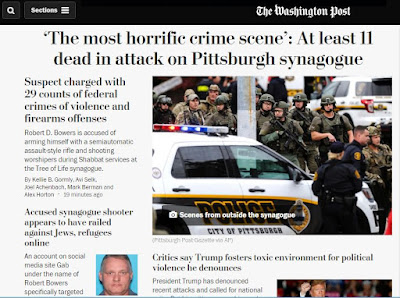 
This event overshowed the capture of the practically homeless, bankrupt, occasional stripper and amateur bodybuilder-turned-rage-filled fanatical Trump supporter and all-around-alienated loser, Cesar Sayoc, the man who sent 14 pipe bomb devices -- none of which detonated but which the FBI has said were not hoax devices -- to a who's who of Trump's favorite Democratic enemies.
As this New York Times article notes: 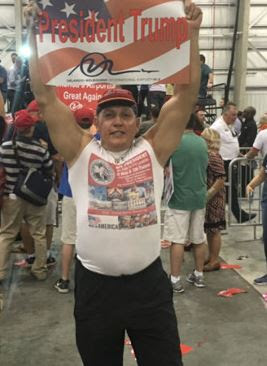 And when Mr. Sayoc’s mother and sisters urged him to seek mental-health treatment, he furiously repelled their efforts and told his mother he hated her, said Ronald Lowy, a lawyer for the family who also represented Mr. Sayoc in a 2002 case in which he threatened to bomb an electric company during a dispute over a bill.


He refused to even listen when his mother reminded Mr. Sayoc that he was Filipino and Italian, not Seminole, Mr. Lowy said. "He had tremendous anger slowly boiling up, and resentment, and felt 'less than.' He lacked an identity. He created a persona." 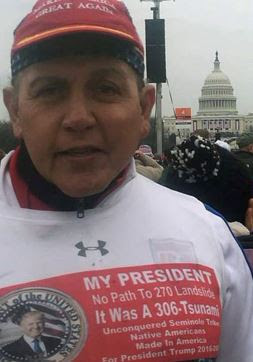 "He was looking for some type of parental figure and being a loner, being an outcast, being the kind of person Trump speaks to, I think he was attracted to Trump as a father figure," Mr. Lowry said.


Sayoc was arrested and his Trump-fanatical-supporter sticker covered white van in which he lived was seized in the appropriately-named Plantation, Florida.
Arresting Sayoc is unlikely to quell the "false flag" conspiracy-mongering that is now the hallmark of the entire rightwing Republican media and political ecosystem. 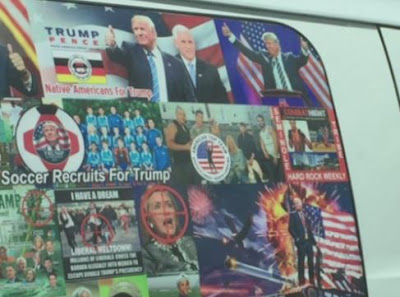 
As this only-partially-humorous Slate piece put it (link embedded): Daily Dem Panic Meter: Welcome to False Flag-Gate, Where Even False Flags Are a False Flag. 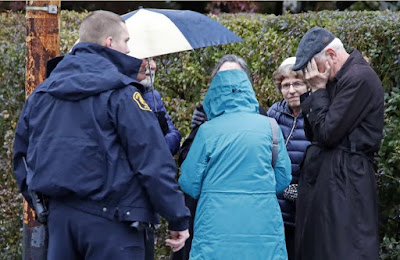 Continuing with this theme, Fox News had no idea how to cover the fact that Sayoc is a fanatical Trump lover. As this Slate piece observed, Fox News itself served as the metaphysical tarp over Sayoc, Trump, and the MAGA van. 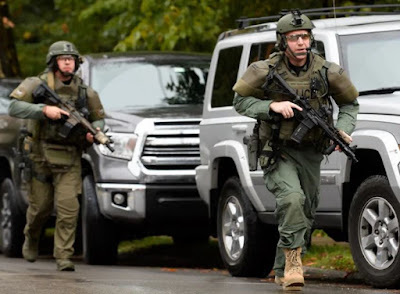 By the way, all this psychotic rightwinger violent mayhem has completely blown up the Fox News pre-midterms propagandistic grotesquery involving nonstop hyperventilating over the Honduran migrant caravan of women and children 1,000 miles from the U.S. border. 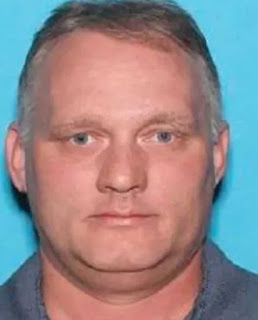 In the case of Robert D. Bowers, the Tree of Life Synagogue mass murderer, he was your garden-variety white supremacist neo-Nazi piece of shit addicted to the virulent toxin of social media. If he isn't put to death, hopefully he'll die violently in prison.


That was to be the GOP's firehose of agitprop horseshit in the leadup to the midterms -- and the mainstream media was dutifully playing along until the "MAGAbomber" came along. 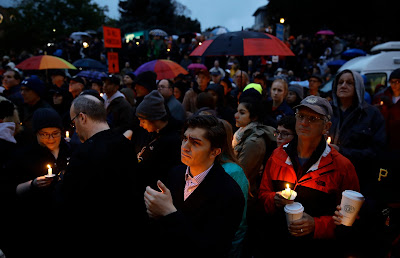 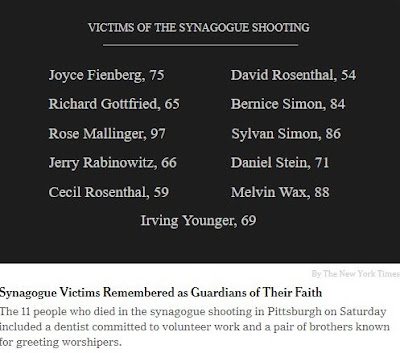 The list of the 11 Tree of Life Synagogue victims and ages; Source: New York Times
What can anyone possibly say to this? It's beyond words, except to say that it is a horrible indictment of that an advanced and civilized society essentially allows this to happen because an arms merchant industry and its diseased cult-like followers long ago hijacked the political system. 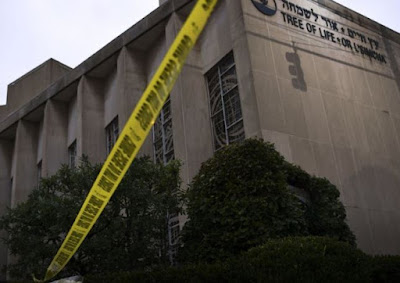 Tree of Life Synagogue in Pittsburgh as crime scene
*******

As for Trump, about the only not horrible to say in this situation is that it isn't about him. This means his severely deranged and solipsistic sense of self can't suck everything and everyone into the Trump Vortex. The bastard shrinks away to the vanishing point.


Make no mistake, though: Trump bears responsibility for the (dis)temper of this time. 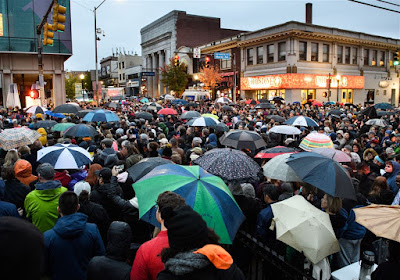 
We are just 10 days from the election and who knows what's going to happen. Yes, the signs are strongly encouraging for the House side, but an Ezra Klein interview of FiveThirtyEight's Nate Silver this past week revealed "the terrifying uncertainty at the heart" of his organization's election forecasts.
This is an excellent, highly informative piece, and I highly recommend it. 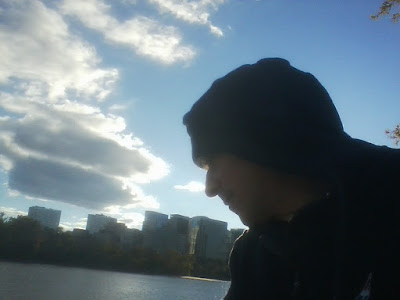 Yours truly along the Potomac River, Georgetown, Washington, D.C., 4:58 p.m. Oct 21, 2018
Of note, one of the buildings in the Rosslyn skyline in the backdrop is the new CEB Tower with its Observation Deck. I need to go up there.
*******


OK, I'm going to wrap up this entry. I'm not going to be able to feature a Jukebox Saturday Night edition this week. 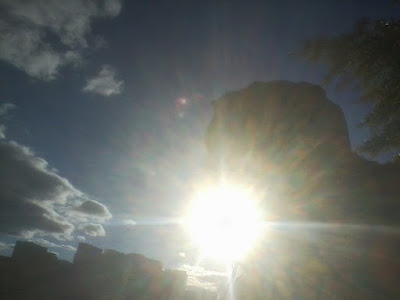 
Looking ahead, I'm going to try to post an entry tomorrow to include a yearly precipitation update since it has been such a wet year.
As for tomorrow, my original plan was to go to the gym -- and basically treat the day as a Saturday since -- but maybe I'll just do what I normally do, namely, walk down to Georgetown and have lunch. 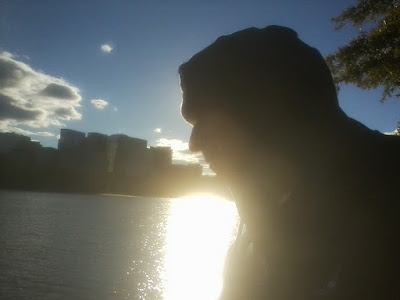 
No matter what, I must be home early tomorrow evening since I am heading to Detroit on Monday morning for a work conference. It's just a one-night stay, and I should be back by late Tuesday.
--Regulus
Posted by Regulus at 11:44 PM