Not Quite the Usual Angel and Most Definitely Not In Hiding: Remembering Actor Dack Rambo 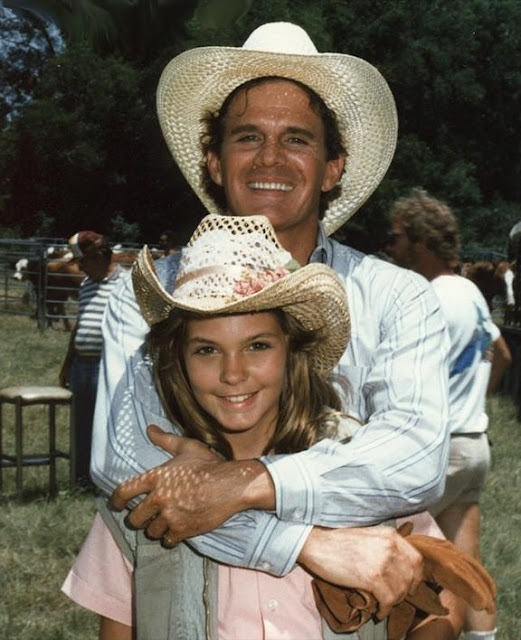 
On Monday, upon getting home from work but before going to the gym, I turned on MeTV to watch one of the old Charlie's Angels episodes it airs at 5 p.m. The episode in question was "Angel in Hiding" and was actually the first part of a two-part episode (with the conclusion on Tuesday). 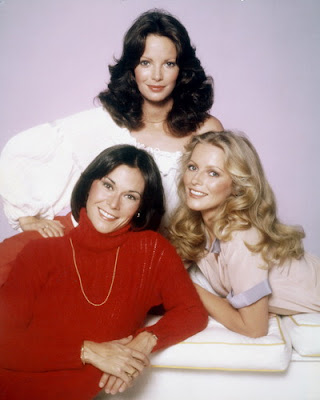 I won't into any details, but it's vintage Charlie's Angels fare of models, murders, and many closeups of Jaclyn Smith and Cheryl Ladd. Down to just two angels -- Farrah Fawcett, Kate Smith, and Shelley Hack having departed the episode introduces Tanya Roberts as Julie Rogers as the third angel for season 5.


Instead, what I'd like to note is that the episode features a certain actor named Dack Rambo. 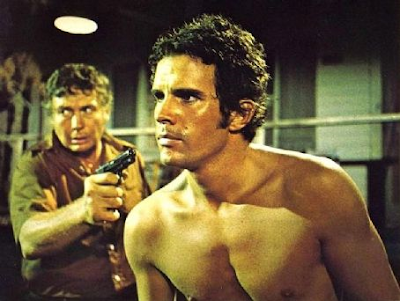 By 1980, Dack Rambo was already a moderately well-known, very hunky-handsome actor who had been featured in movies as well as guest and recurring TV roles stretching back into the 1960s to include The Guns of Will Sonnett and for the next three decades through the 1970s and 1980s into the early 1990s. 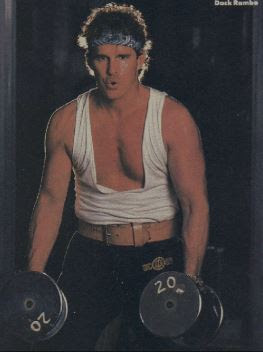 Indeed, you could find Dack making guest appearances on all the "classic" TV series of that Golden Age period of primetime television on such shows as Marcus Welby, M.D., Wonder Woman, The Love Boat, Fantasy Island, M.D., Murder, She Wrote, and, yes, the aforementioned Charlie's Angels two-parter episode. 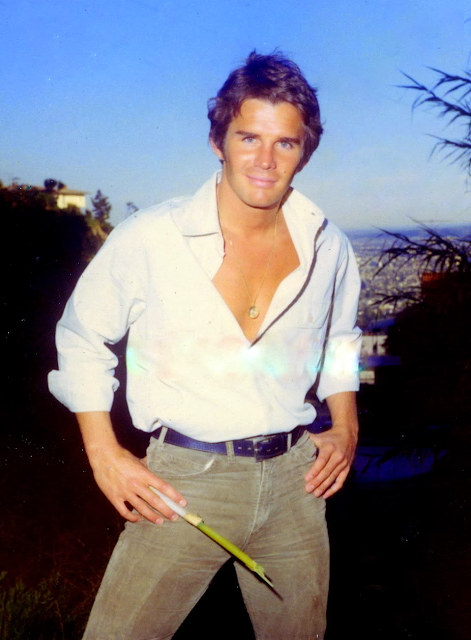 Dack achieved his most notable fame as Jack Ewing -- a cousin of J.R. and Bobbie Ewing -- on Dallas between 1985 and 1987. He also had recurring roles on All My Children and Another World. 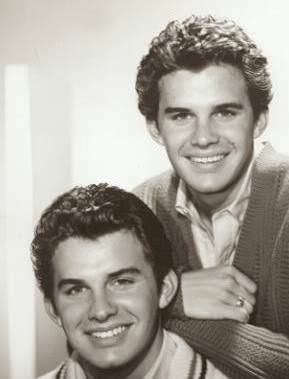 Born Norman Jay Rambo on Nov 13, 1941, Dack Rambo had an identical twin brother named Orman Ray Rambo who later went by Dirk. Yes, they were Norman and Orman. They are pictured left at some point in the early 1960s and, no, I'm not sure which one is which. Dack had a mole on his left cheek, but I can't see it here.


They were born to parents William Lester and Beatrice A. Rambo (Rossi) and raised in on a farm in Earlimart, Calif. 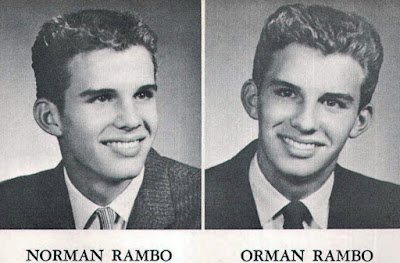 
The brothers also had an older brother, William Donald Rambo, and a younger sister, Beverly Rambo (who may still be alive). And, yes, "Rambo" was the family's actual surname, although Dack may have sometimes spelled it as "Rambeau." 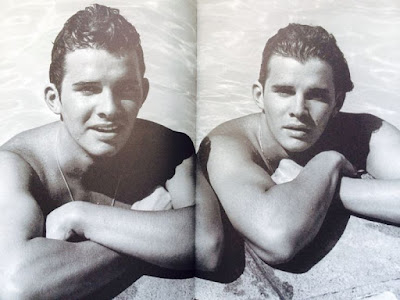 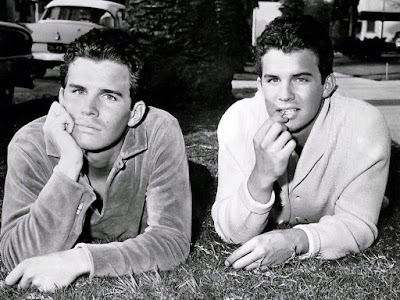 
Dirk Rambo was killed on March 5, 1967 in a fiery car crash caused by a drunk driver in Hollywood. He was only 25 years old.
As for Dack, this horrific tragedy would haunt him for years and he would often speak at Mothers Against Drunk Drivers (MADD) events. Professionally, Dack continued his acting career and as the following screenshot of his Wikipedia page filmography shows, he was quite prolific with 40 distinct entries -- TV shows that encompassed multiple episodes. 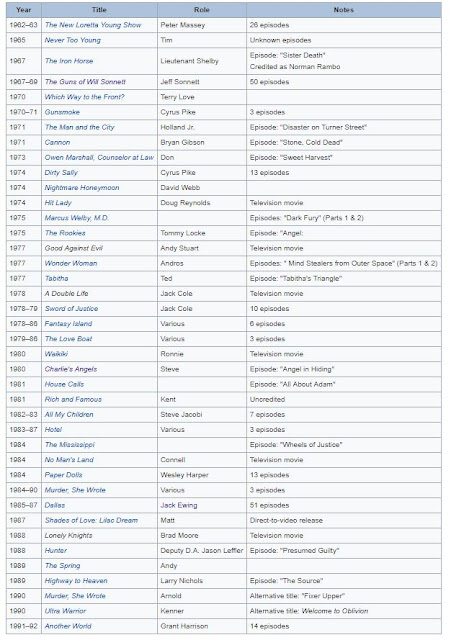 Click on image for more legible version or see here.
*******


Distinctly bisexual and quite active sexually during the days of the AIDS pandemic, Dack was diagnosed with AIDS in 1991 when it was still a near-certain death sentence and a career-ender for any actor. 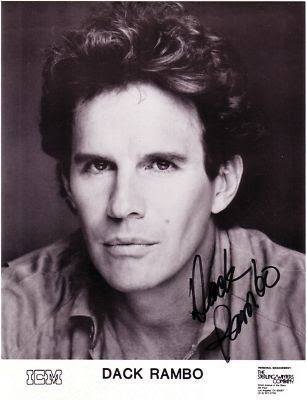 Dack Rambo died of AIDS toward the end of the worst of the pandemic and right at the cusp of the massive social shift toward acceptance of what today is broadly termed LGBTQ people. On this topic, I found online yesterday an archived (pre-internet) Washington Post interview with Dack that discusses how he found out he was infected and how his life changed.


The article notes that he was the first "major actor" to make such an announcement. To be clear, the case of Rock Hudson six years earlier in 1985 was somewhat different since that was announced by his publicist just over two months before he died. As for the Post article appeared on Nov 25, 1991 (one day before my 22nd birthday). 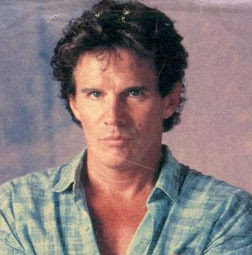 Based on the reference to the timing of Magic Johnson's announcement, Dack discovered his diagnosis in summer 1991 and went public in Sept 1991. The article is therefore dated about two months later -- and 28 months before he passed away on March 21, 1994 at age 52.


The article mentions the terrible experience of another (gay) actor who died of AIDS around that time -- Brad Davis (of Midnight Express infamy) -- and the hypocrisy of Hollywood at the time toward actors with HIV/AIDs. 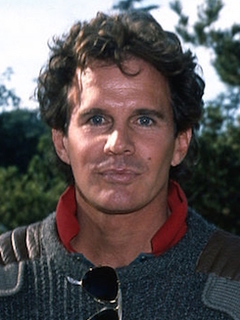 The article includes a discussion about his sexuality -- whether it was the time or not, he appears to have been genuinely totally and ambivalently bisexual -- and his experience on Dallas, which while financially rewarding, was unpleasant because he and Larry Hagman disliked each other. Another interesting tidbit is that he actually dyed his hair to be brown for many years as it went gray and then white quite early. 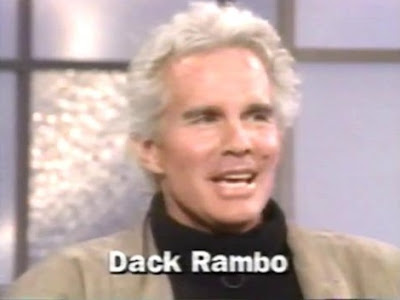 Above is screen shot of Dack on the Maury Povich Show in 1992, his hair now fully gray-white. I'm not sure what Dack was doing on that trash tabloid program but he looks happy, so I included it.
OK, I found Maury Povich interview here. It's 24-minutes, although it's more like 8 minutes as a result of multiple repetitions (even with other parts omitted). OK, I change my mind: It was good that he did the interview. 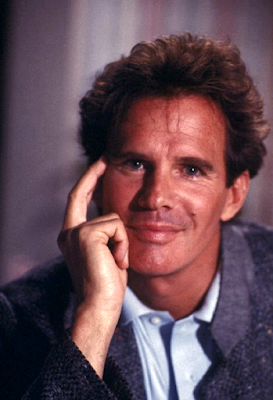 It goes without saying -- and yet it is still so startling to me -- how different is the world today in terms of social acceptance of LGBTQ people. It's also very sad to think of how Dack's life could have been if he had been able to live several more years when the AIDS treatments became so much more effective. He was robbed of a full 25 years of life and all the things that he could have done.


On a personal for me as a gay man now nearly 49 years old, I find myself in a disjointed sociocultural context and overloaded with alienation and dissatisfaction. On the one hand, the United States of 2018 allows people to "come out" all the time -- and in some socioeconomic settings, quite celebrates it. Here in D.C. living among the millennials in this D.C., it seems to be embraced in a way that was unfathomable even 25 years ago. 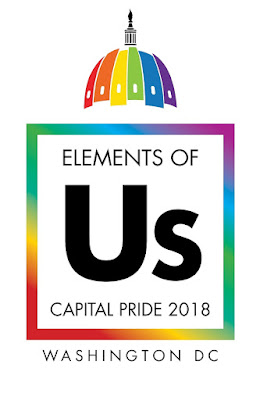 On the other hand, in this place and time for me, there's effectively no past, present, or future. My own experience of "coming out" was traumatic and, thereafter, during my "prime years" sufficiently horrible with bad decisions galore that it is for me one of boundless regret and much bitterness. And so, today's at-least-superficial widespread acceptance is to me a weird face slap instead of something good.


Now, I readily admit that my experience was much easier than for most people trying to grapple with the issue of being homosexual in the decades before my time stretching back into the 1950s and '60s. Also needless to say, I cannot speak to Dack Rambo's experience -- he moved in a profoundly different reality than I ever did or ever will.
Anyway, without further ado, here is the article (link embedded): Dack Rambo, In Another World.
OK, signing off for now.

on Maury Povich, Dack said that Jesus cured his illness