Reposting Jonathan Chait's New York Magazine 9/17 Column: "It Takes More Than 'Adults in the Room’ to Control a Petulant Leader Like Trump" -OR- The GOP Now, Weimar Conservatives Then 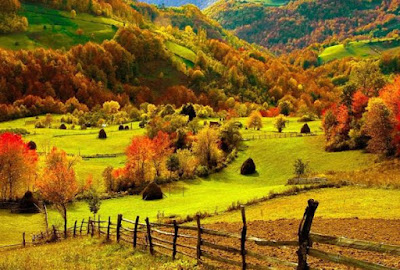 In lieu of a larger, multipart entry tonight, I just want to repost a Jonathan Chait piece that appeared on 9/14/2018 his Daily Intelligencer site and that appears in the New York Magazine print edition of 9/17/2018.
I don't feel like starting a lengthy entry tonight. I came home right after work, made dinner, and now I'm watching the MeTV lineup including, right now, Perry Mason.
My plan is to post a regular entry late tomorrow (Wednesday) after I go to the gym.
--Regulus


It Takes More Than ‘Adults in the Room’ to Control a Petulant Leader Like Trump
By Jonathan Chait
Daily Intelligencer, Sept 14, 2018
Source here


In reposting this Chait piece, I'm not including any of the hypertext links within the body of the text. However, I am including a set of political-themed entries -- several of which I've already posted. They are just to break up the text and, hopefully, are amusing even if the subject and the time in which we are living is anything but. 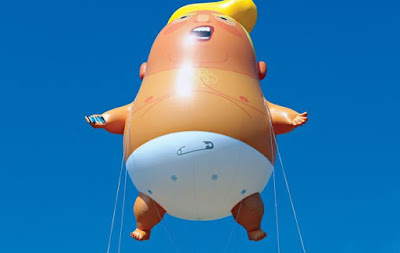 One of the most blandly unsettling passages in Bob Woodward's Fear recounts the near resignation of Gary Cohn, one of the book's likely sources and (therefore) heroes. 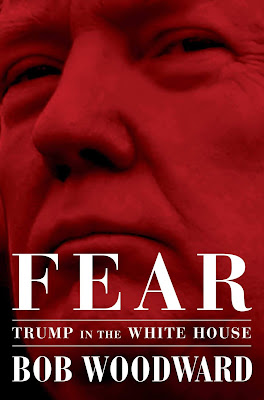 In August 2017, Cohn, nauseated at President Trump's equivocation over neo-Nazis demonstrating in Charlottesville, Virginia, attempted to quit. Trump berated Cohn for his weakness and, characteristically equating political loyalty to himself with loyalty to the country, accused Cohn of "treason." "It was chilling," Woodward reports.


Then Trump tried another approach. "If you leave now, taxes are over," he warned. By this he meant the massive corporate tax cuts Cohn had helped to craft and from which he also stood to personally benefit. Cohn's moral outrage began to drain, and he instead decided to stay on, prioritizing the taxes, or, as Woodward has him selflessly declaring, "helping the country." 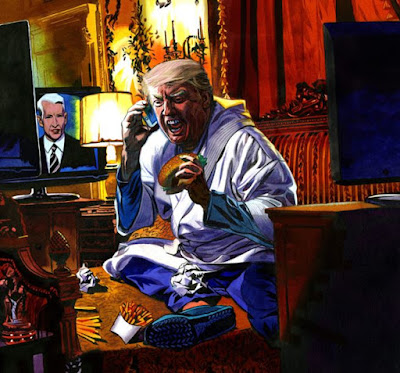 There is no better symbol for the Republican Party elite in the Trump era than Gary Cohn weighing the morality of opposing Nazism against corporate-tax-rate cuts and choosing the latter. 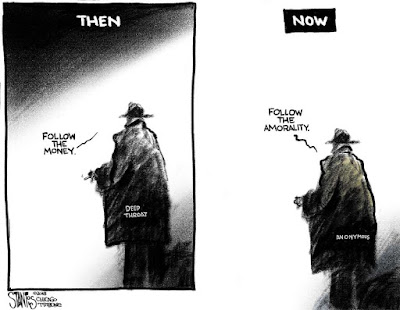 But it is also a reminder that Nazism, which several generations of Americans have grown accustomed to thinking of as an exotic symbol of pure, abstract evil, in reality represents a political faction. 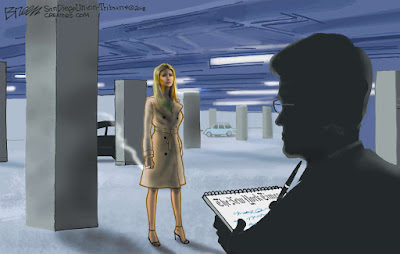 Trump is not a Nazi. Nor, even, is Steve Bannon. They are, however, Nazi-adjacent, and actual neo-Nazis are excited about Trump, who has emboldened and empowered white nationalists in a way nobody could have fathomed until recently. They are just another part of the party coalition now. 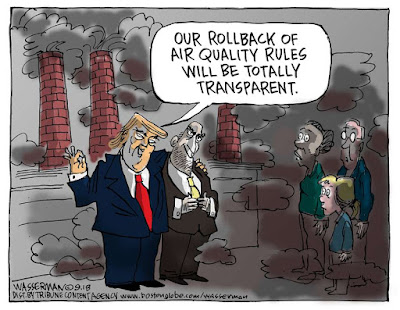 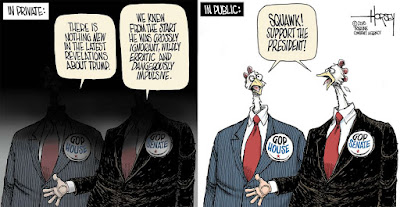 The Weimar era that culminated in Hitler's triumph was bitterly polarized. Nazis drew their heaviest support from rural areas, and they viewed Berlin -- culturally libertine, swarming with immigrants -- as alien to the "real" Germany. 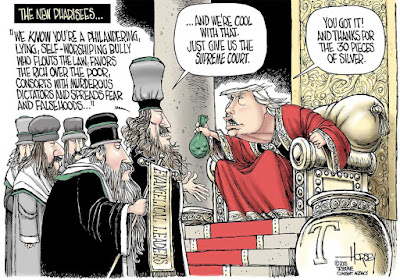 Hett presents Nazism as a backlash directed in large part against globalization, which many Germans saw as harmful to their economy, and immigration. "The German people have no interest," wrote Hitler, in "a German financial group or a German shipyard establishing a so-called subsidiary shipyard in Shanghai to build ships for China with Chinese workers and foreign steel." 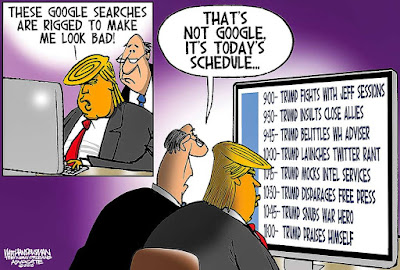 Germany's porous eastern border had allowed an influx of Jewish immigrants, who had changed the tenor of Germany's culture. Joseph Goebbels at one point proclaimed, "We want to build a wall, a protective wall." 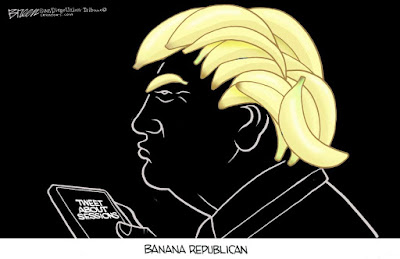 They nurtured in their supporters what Hett calls a "cult of irrationality." Amusingly, Hitler weathered a collusion scandal, in which he was charged with accepting covert campaign funding from his ally Benito Mussolini. 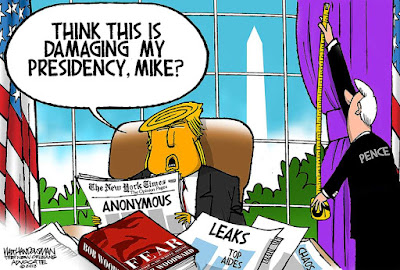 The important parallels here are not between Hitler and Trump. While Trump, like Hitler, is racist and authoritarian, his racism is not genocidal, his contempt for democracy is instinctive rather than ideological, and he crucially lacks any plan for massive territorial conquest. What makes the history pertinent, rather, are the eerie similarities in the behavior of the right-wing politicians who facilitated both men's rise to power. 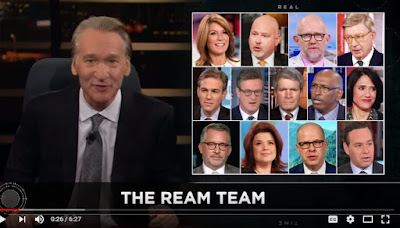 If they had known from the outset that Hitler's tenure would end in war-crimes trials and Soviet tanks rolling through rubble-strewn Berlin, Germany's traditional rightists obviously never would have supported him. They did, however, consider him an ignorant demagogue, unqualified for high office and dangerously divisive. The country's president, Paul von Hindenburg, who excluded the Nazis from the government for years because of his contempt for their leader, might be described as a #NeverHitler conservative. 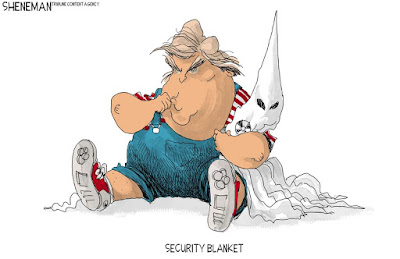 Eventually, however, the fear and contempt with which the Establishment right viewed Hitler gave way to an appreciation for his populist appeal. Eventually, they decided to bring the Nazis into the government -- National Socialists never came close to winning a majority -- on the assumption that they could outmaneuver Hitler and curtail his worst instincts. 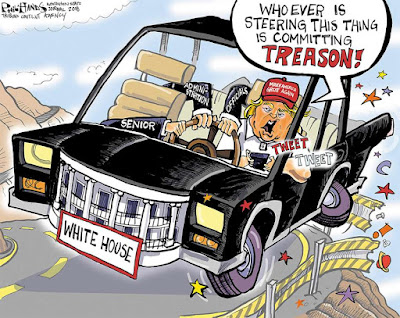 From the perspective of what followed, this decision seems insane. But from the standpoint of 1933, in the midst of a long political stalemate among a deeply polarized electorate, empowering Hitler offered conservatives the only alternative to sharing power with the hated Social Democrats. 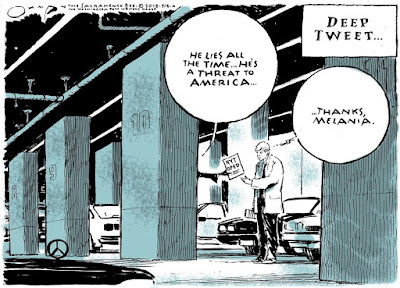 The German right didn't want "a lawless and barbaric dictatorship ruled over by somebody like Hitler," concludes Hett. "They simply wanted the fastest and easiest solution to their own particular problems, and were deeply unwilling to compromise with their opponents." 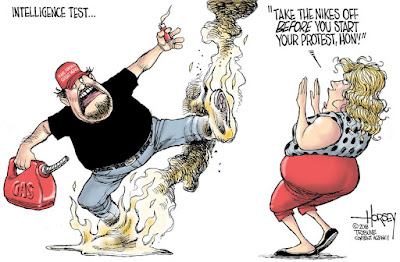 Obviously, the fact that one erratic racist authoritarian demagogue proved impossible to contain does not prove that every erratic racist authoritarian demagogue is uncontainable. There are good reasons to believe Trump's presidency will pass without catastrophic damage -- chief among them, he may simply be too incompetent to make good on his anti-democratic impulses. It is notable, however, that a year and a half into Hitler's tenure, his right-wing allies, including Hindenburg, still viewed their alliance with him mostly as a success. 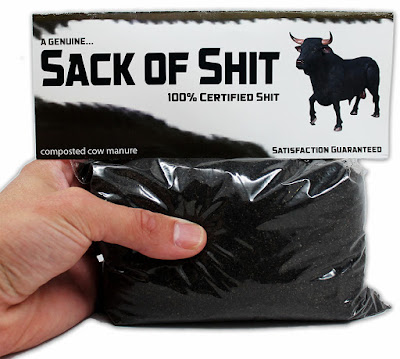 That same breezy confidence infuses the Republican "adults" surrounding Trump. Just as Franklin Roosevelt brought in a wave of young New Dealers to Washington, and Lyndon Johnson became known for his cadre of the "best and brightest" foreign-policy experts, who masterminded the Vietnam debacle, Trump's administration has become associated with a novel archetype: the "adults in the room," the semi-anonymous cordon of Republican professionals putatively saving the country from his amateurism, mood swings, and irrepressible affinity for Russia. 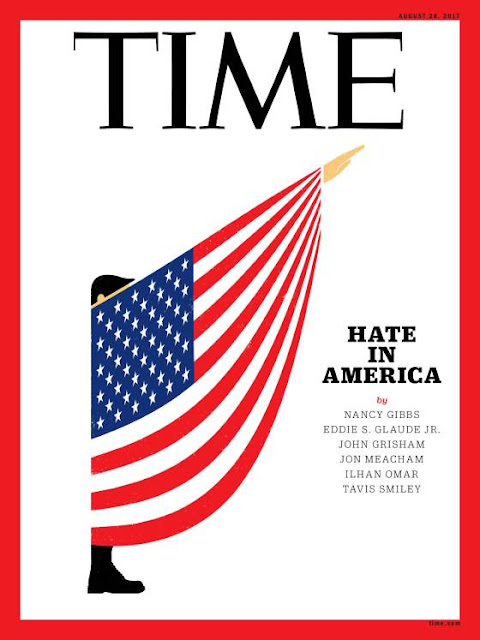 "Americans should know that there are adults in the room," boasts the now famous anonymous New York Times op-ed. Fear likewise presents Cohn and other adults in the room undertaking heroic feats of babysitting. They endure tantrums, deftly exploit the president's failure to develop object permanence by swiping from his desk key orders he has demanded to sign, and plot to undermine him. 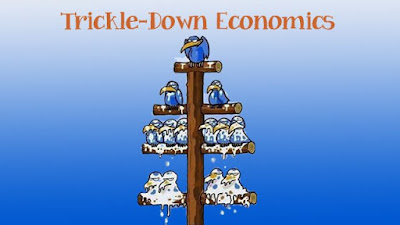 Some of the adults in the room are surely saving America from untold horrors. Others are merely attempting to conceal the extent of the horror from the country (by, say, trying to persuade him not to obstruct justice in public via social media). And this creates risks of its own. The sense that Trump has been controlled by the adults in the room is itself a moral hazard. 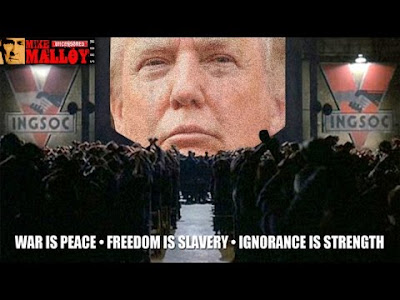 Trump does grasp that he possesses the means to punish his enemies within the party. He reportedly intends to part with Secretary of Defense James Mattis and Attorney General Jeff Sessions and will probably replace them with more pliable figures.
In the meantime, the confidence that the adults in the room will prevail as long as Trump remains has allowed Republicans to shield the administration from meaningful oversight and investigation. 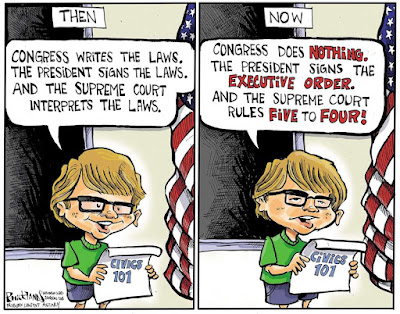 George W. Bush is emblematic: Despite having refused to endorse Trump in 2016, Bush never endorsed his opponent, either, and is now raising money to keep Congress in Republican control. (Think of the tax cuts!) A Trump who emerges from the midterms having held control of Congress would be even more empowered -- the myth of his political immortality would grow to awesome dimensions. The belief that Trump's power has been curtailed has become a rationale to hand him more of it.
*This article appears in the September 17, 2018, issue of New York Magazine.
Posted by Regulus at 11:52 PM