Out of the Frying Pan Shoals and Into a Scripted Natural Disaster Media Fire -OR- Hurricane Florence's Windy Friday Fan Dance, Plus Update 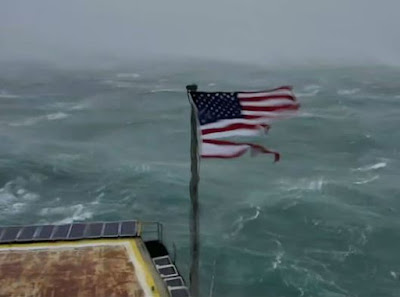 Screenshot from one of the live-feed cameras on the Frying Pan Shoals Light Tower earlier on Sept 13, 2018 as Hurricane Florence arrived.
Much like the lost Ambrose Light Tower in Lower New York Bay of my Jersey shore youth, the Frying Pan Shoals Light tower is "Texas Tower" lighthouse platform located about 32 miles off Cape Fear on Bald Heat Island, N.C., in the "nautical graveyard" of Frying Pan Shoals. And, yes, that disintegrating American flag in storm-force winds was painfully symbolic to the many people who watched the live feed earlier on Thursday.
******* 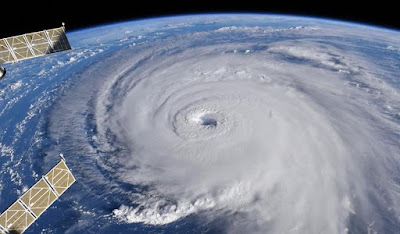 
This is a Hurricane Florence-related update with a series of topically-related weather images -- National Weather Service (NWS) radar loops, NOAA GOES East satellite loops, pictures from the International Space Station, National Hurricane Center (NHC) track infographics, weather NWS advisories in the affected zone, and NWS rainfall forecasts -- that I've collected over the past few days.
They are posted mostly in no particular order. 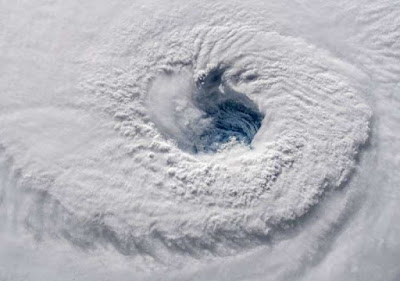 The eye of Hurricane Florence as seen in a closeup image taken by ESA astronaut Alexander Gerst from the ISS, September 11, 2018 (time unspecified).
*******


Let me just say it: This damn hurricane is getting on my nerves, and not just because the American media / entertainment complex's hysteria is the usual Category 5 shit-storm about how this now-category 1 hurricane is an epochal, civilization-altering, never-before-occurred, catastrophe-in-the-making for all those places that see hurricanes every few years, namely, eastern North Carolina and the Southeastern U.S.
I refer to Hurricane Florence.

The Newport / Morehead City NWS (MHX) radar in standard base reflectivity mode looped
11:36 pm Sept 13, 2018 to 12:24 am EDT Sept 14, 2018
This image and the one below are the most recent ones for this entry. They are identical time periods for the base reflectivity and composite modes, which as their names suggest, indicates what is falling from the base of the clouds (the former) and what is going on throughout the cloud (the latter).
These images show that the eyewall of what is now an high-end category 1 storm is set to cross the North Carolina coast at or near Topsail Beach and track right over Wilmington proper.
*******


The big media networks (CNN, MSNBC, Trump TV (Fox), the old "Big Three" networks) have been in overdrive with the chyrons featuring dire messages including a few that are so wildly exaggerated beyond or misinterpreted from what NHC meant that they don't even make factual sense (to say nothing of being totally misleading) such as HURRICANE DOUBLES IN SIZE! and HURRICANE WANTS TO STRENGTHEN!

GOES East U.S East Coast sector daytime true color visible satellite image loop 1357 UTC - 1727 UTC Sept 12, 2018
Note 1: The times here are actually approximate since I can't slow down the looped image enough to be sure exactly. (I could capture the image in a different way to be sure, but it takes too much time for my purposes.)
Note 2: These are true color visible daytime and multi-spectral infrared (IR) night time.
Note 3: The GOES East (or GOES 16) images are awesome in their spatial and temporal resolution and overall detail.
*******


In point of fact, Hurricane Florence has steadily weakened since yesterday when the NHC was putting its winds at 140 mph sustained -- something that Cranky Weather Guy in a Wednesday entry found quite unsupportable based on the NOAA hurricane hunters own data -- and is now down to 90 mph. 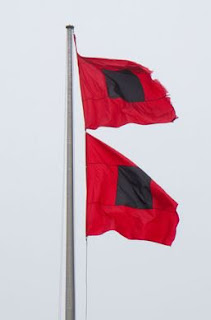 
As anticipated, the dumbass ridge to the north has caused the tropical cyclone to stall and is set to cause it to move westward and even southwestward for at least two days to a point in western South Carolina before an approaching shortwave picks up the remnants of the system to ride up along the western flank of the western Atlantic ridge.


Whether we get any rain from the remnant system here in the D.C. area is uncertain, depending on the final track of the actual low. It's worth point out that it's not like we actually need it as it has been very wet regionwide since mid-July. 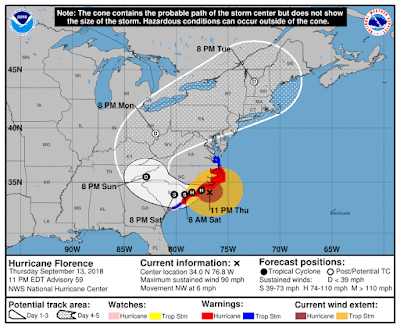 NHC 5-day track and cone of uncertainty forecast for Hurricane Florence, advisory 59
Issued 11 pm EDT Sept 13, 2018
I have to say that this right hook into North Carolina near Cape Fear and then the left hook in western South Carolina -- and going around the D.C. area -- is such a typical outcome, but that doesn't make it any less obnoxious if you want some sort of local impact (which, I realize few people want, some of whom -- like my friend, Chester -- for legitimate reasons, as opposed to the Sue "Snake Eyes" Palka sort of stupid reasons).
*******

Animated loop of NHC's 5-day track and cone of uncertainty forecast for Hurricane Florence spanning advisories 1 - 53
You can watch it snake -- segmented centipede-like -- across the entire Atlantic Ocean and looking promising until the very end, when the chance for an impact (any impact) here characteristically craps out. This was taken from a Cranky Weather Guy posting on Wednesday. It was also featured on his Twitter page, but I couldn't download the animated gif from there.
*******


Having said that, the track of this hurricane is about as annoying and obnoxious as you would expect for the usual D.C. area non-impact (see advisory 59 track / uncertainty cone image above).
Instead, it will be the usual 10 to 20 to 30+ inches of rain across the usual places of eastern North Carolina and also northeastern South Carolina, decreasing to the western parts of those states.


On the topic of American media coverage of hurricane impacts in the United States, with a few exceptions -- most notably, in the aftermath of Hurricane Katrina hen civil society itself broke down in the aftermath in New Orleans -- these are scripted events starring broadcast entertainers who pose as network and cable news reports (to include the "specialty" network of the Weather Channel) and the hurricane as backdrop.


In the aftermath -- aside from whatever coastal destruction and inland flooding damage plus the typical ecological damage as a result of all the overflowing pig and chicken shit and assorted unregulated chemical toxins in the environment that proliferate in the South -- Mitch "The Bitch" McConnell will RAPIDLY shepherd a big, huge relief and recovery bill through the Senate (and shitty, going-out-the-door Paul Ryan will do the same in the House) with most of the money coming, as usual, from Blue State taxpayers.


This will happen BEFORE the upcoming midterms, which still LOOKS very promising for the Democrats, but that doesn't take into account actual voting; relentless GOP voter suppression drives; as Charlie Pierce says, Russian government rat-fcking on social media; massively and systemically gerrymandered House districts; a shitty geographical distribution of Republicans versus Democrats; and a Senate map that is about as bad as it ever could be for Dems. 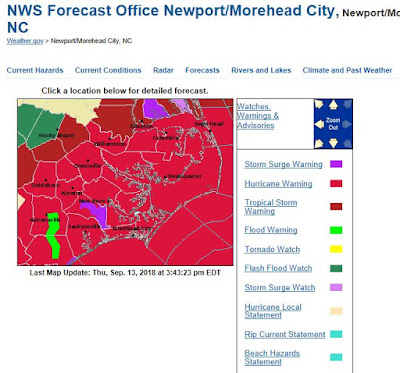 MHX National Weather Service Forecast Office (NWSFO) county warning area (CWA) advisories with legend as of 3:43 pm EDT Sept 13, 2018
Note 1: At 3 am Sept 14th as I write this, it doesn't look much different.
Note 2: In this case, the radar is located at the MHX NWSFO, so the two have the same three-letter identifiers. This is also the case for the Sterling (LWX) radar and Baltimore / Washington NWSFO -- both co-located in Sterling, Va.
*******


As for Trump, that antisocial personality disordered sociopath who is only occasionally plugged into reality, he will sign it if only because well, he doesn't know or care for anything about anything.
About this deranged, would-be-authoritarian (but for the fact he's too lazy, stupid, and lacking in critical thinking skills) buffoon and historical tragic accident of a U.S. President, he's back to his usual Twilight Zone tweeting shit, this time with garbage about the Puerto Rico Hurricane Maria fatality count and how the death count increase was a Democratic conspiracy against him (see two tweets below).

Trump's sociopathic but otherwise tiresome tweet 2.
This outburst was triggered by the reaction against his bizarro world claims a few days ago that the Hurricane Maria recovery effort was a great success (including the six months it took to restore the island's power grid to its previous precarious state).
Tony Schwartz -- co-author of Trump's seminal book The Art of the Deal way back in 1987 and today one of his most astute critics -- was on Hardball on Thursday evening. 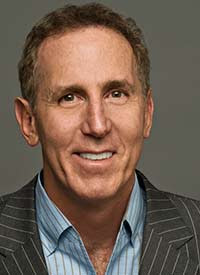 Schwartz had earlier tweeted the following at 7:55 am Thursday morning:

When Trump tells a lie -- as with the handling of the disastrous Puerto Rico hurricane -- the magnitude and repetition of the lie is in direct proportion to how fully he believes he is guilty of the charge being made against him. 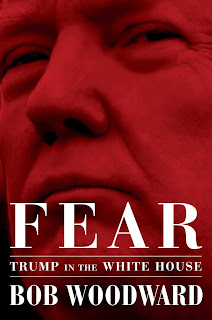 Imagine the worst toothache or back pain you've ever had and how obsessively preoccupying it becomes. That's what Trump feels all the time in the face of even the smallest criticism. It's unbearable to him, and It's why he can't control his rage.


The remainder of this entry is just a personal update. It contains a trio of sky-and-cloud images taken in Alexandria on Wednesday evening that Tim sent to me. They are not labeled. Click on / download the images for information. 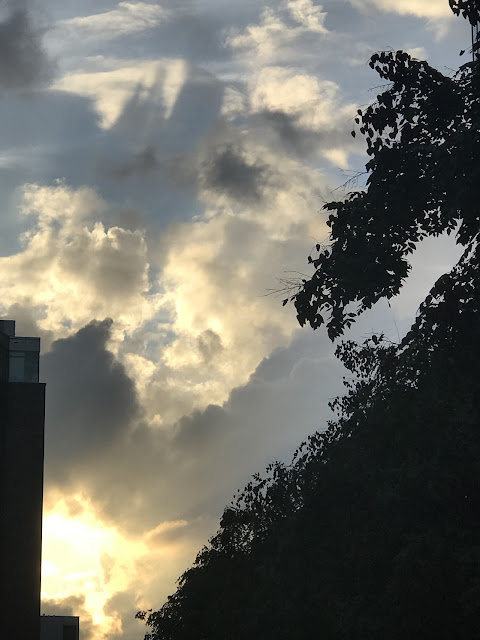 As an update, I went to the gym tonight -- again, gingerly, when it came to weightlifting and a concluding swim given my shoulder dislocation from a month ago at the hands of Trade bartender Aaron Riggins. (The medical bills to that are starting to roll in, but it will be another week or two before I have a final idea and can make certain decisions.) 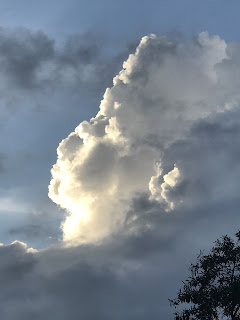 I did all my laundry tonight and was watching the usual MeTV lineup to include, of course, Perry Mason ("The Case of the Baited Hook").

I also made a characteristically late dinner -- which, I understand, makes you fat, but so does the totality of present-day American society and culture. 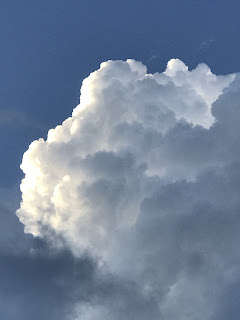 For tomorrow, after work, my plan is to meet Fred upstairs at Annie's, as we sometimes do -- and the ONLY time I go to frickin' 17th Street and the long-since-exhausted-and-worn-out "gayborhood" that is slowly morphing into something else, anyway.

OK, that really is all for now. My next planned entries will occur Saturday night, I think.


That is, I'll try to post a Saturday Evening Post and a Jukebox Saturday Night pair of entries.
--Regulus
Posted by Regulus at 3:30 AM