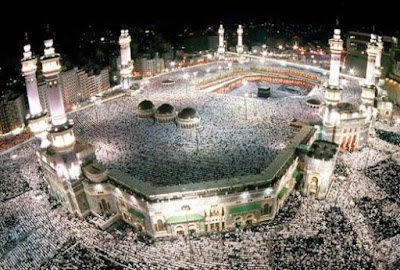 I would like to repost an article from the New York Times about Muslims and the annual Hajj (which is underway this week). On a related note, the other day I came across another article featuring aerial (drone?) pictures of Mecca and the al-Masjid al-Ḥarām (the Great Mosque of Mecca) during the time of the Hajj and the astonishing number of people there on their sacred, once-in-a-lifetime pilgrimage. 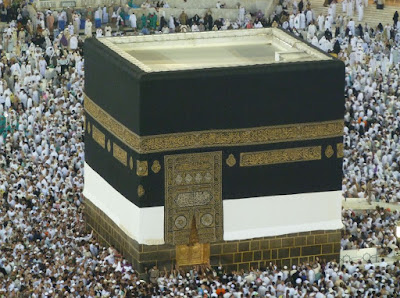 I've always been curious about the cube-like structure -- known as the Kaaba -- at the very center of the Great Mosque of Mecca.
The Kaaba is basically the Muslim / Islamic equivalent of the "Holy of Holies" of the legendary Tabernacle in Judaism (itself supposedly located, inconveniently, under the Dome of the Rock in Jerusalem). (I'm not even sure what the Christian (Catholic and Orthodox) equivalent would be. For American Protestantism, it would be a bank boardroom.) 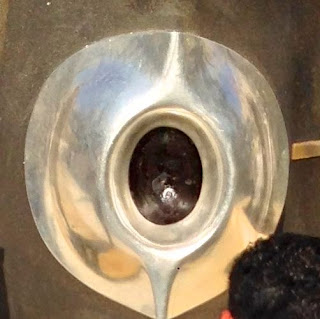 
The Black Stone dates to pre-Islamic times and has long since existed as a series of cement-welded fragments (having possibly been smashed at some point). It may or may not have been a meteorite.
The Keeper of All Knowledge explains it thusly: 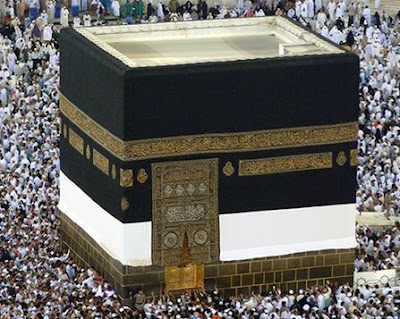 Al-Ḥajaru al-Aswad, "the Black Stone," is located on the Kaaba's eastern corner. Its northern corner is known as the Ruknu l-ˤĪrāqī, "the Iraqi corner," its western as the Ruknu sh-Shāmī, "the Levantine corner," and its southern as Ruknu l-Yamanī, "the Yemeni corner," taught by Imam Ali. The four corners of the Kaaba roughly point toward the four cardinal directions of the compass. Its major (long) axis is aligned with the rising of the star Canopus toward which its southern wall is directed, while its minor axis (its east-west facades) roughly align with the sunrise of summer solstice and the sunset of winter solstice. 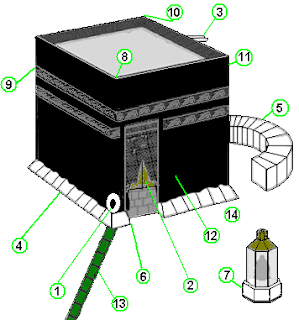 Schematic of the Kaaba showing the main features. See the Wikipedia article link for what's what. The Black Stone is at #1 (corner #8). #5 is the white marble wall called Hatīm. #7 is the Station of Ibrahim (Maqam Ibrahim). Oh, and #3 is a golden rainwater spout (Mīzāb al-Raḥmah).


Of note, this same Wikipedia article contains a "Google street view" of the interior (no joke) and I've taken some screen captures of it. (Other Google search images reveal the same.) The direct link is here. 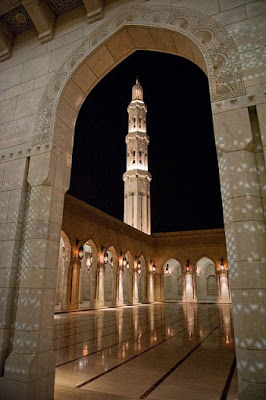 The article below contains four screenshot images I made from that Google street view (dated as Nov. 2016) along with the lead image and two graphs associated with the "Gee, wow" nature of the piece. Lastly, please know that in posting this, no disrespect is meant whatsoever to the Islamic faith. As for Arabic, it's a really cool language that I'd like to learn.


Above: The Sultan Qaboos Grand Mosque at night, Muscat, Oman. (I'm sure my main Omani weather-man has been there!)
******* 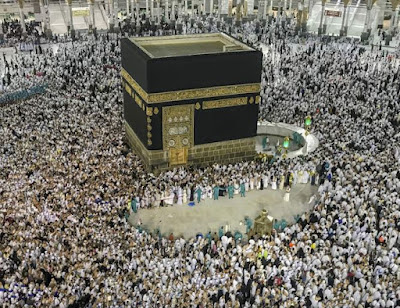 To Get All the World's Muslims to Hajj, It Would Take at Least 581 Years
By Sarah Almukhtar
August 23, 2018
Source here.


At least 1.7 million foreign pilgrims are in Mecca, Saudi Arabia, this week for the hajj, the annual five-day pilgrimage that Muslims from around the world make to follow in the footsteps of the Prophet Muhammad. 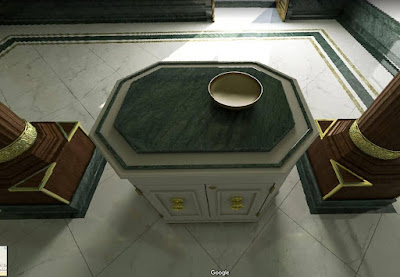 Interior Kaaba view 1
Amid growing demand and concerns for safety after deadly accidents, the Saudi government has been rapidly expanding Mecca’s hajj facilities to accommodate more pilgrims. At its peak in 2012, the hajj included 3.16 million pilgrims. But even at a rate of 3 million people per hajj, it would be impossible for all the world’s 1.8 billion Muslims to perform the Islamic duty of the pilgrimage in their lifetimes. In fact, for all Muslims who are alive today to perform hajj, it would take at least 581 years. 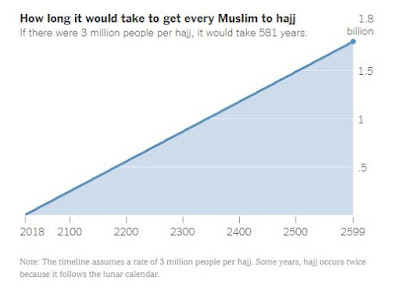 That's just looking at the Muslims alive today -- not accounting for future birth rates or for people who have already performed hajj, though a 2013 Pew survey of 39 countries found that 9 percent of Muslims had.
All Muslims who are physically and financially able to complete the hajj are supposed to do so at least once in their lives. Attendance by foreign pilgrims has grown more than tenfold since World War II. (In 2013, attendance quotas dropped to account for continuing construction in Mecca.) 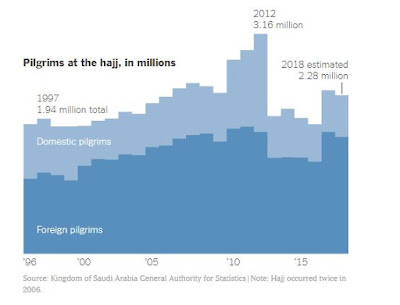 Not everyone who wants to make the hajj can do so easily, and millions of Muslims all over the world wait years for the chance. The costs can be prohibitive -- two to three times a year's salary in some places -- and visas can be hard to get.
At least a quarter of pilgrims every year are citizens or residents of Saudi Arabia. The Saudi government sets quotas for every other country that sends pilgrims to the hajj based on its Muslim population. 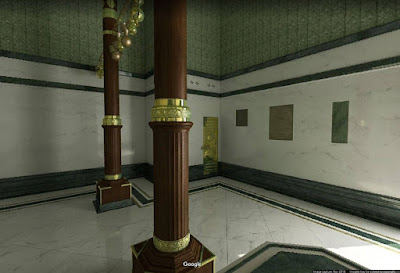 Kaaba interior view 2
Even countries with large Muslim populations can send only a small fraction of their citizens to the hajj. In Indonesia -- which at more than 200 million has by far the largest Muslim population in the world -- the wait time can range from seven to 37 years. Some countries complain that the quota allocation is not transparent enough, or that it should be based on demand rather than on Muslim population. 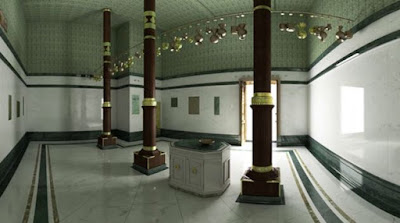 Kaaba interior view 3
Other critics say Mecca is already at capacity during the hajj, and expansion efforts have come at the cost of Islam's cultural heritage and the spirituality of the pilgrimage. Several historic Islamic sites were destroyed in recent years to make way for luxury high-rise hotels and malls that cater only to wealthy pilgrims. These developments dominate the Kaaba, the cubelike structure at the center of the Grand Mosque that is circled by pilgrims and that is considered to be the House of God. 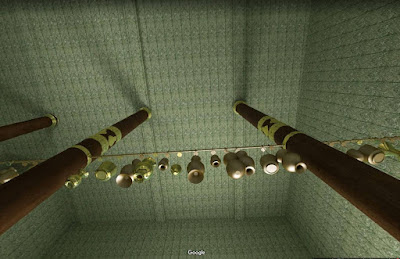 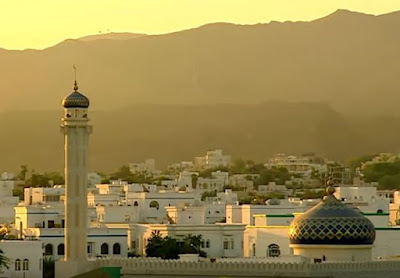 Morning in Muscat, Oman!
Now Oman is a place I'd really like to visit.
--Regulus
Posted by Regulus at 11:52 PM