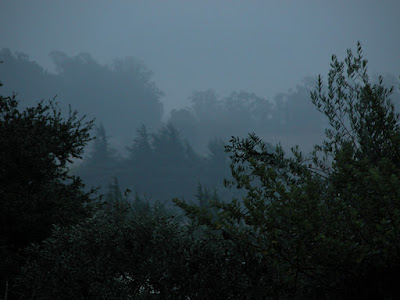 Early afternoon deluge …
I'm home waiting for the rain to slacken so that I can go into the office. I'd telework today but it is easier in the office with my two additional monitors. Besides, I have an appointment tomorrow with a shoulder specialist at the MedStar facility in Chevy Chase.


I would take a picture of it but it would just come out like crap with my cheap flip-open cellphone camera. Suffice it to say, it's rainy, gloomy, and humid. Good.


Here in the D.C. area, temps are in the 75F to 80F range but the dew points 70F+, so it is quite humid with lots of tropical moisture. 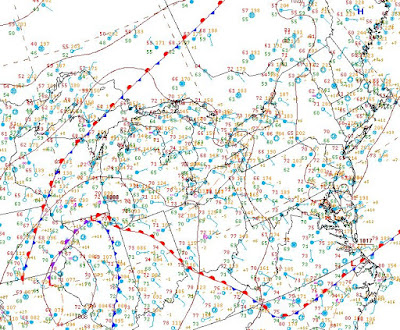 
As the above surface weather map shows, there is a quasi-stationary front stretching from eastern Kentucky to the Tidewater area with a retreating high over Maine. The quasi-stationary front becomes a warm front that stretches back to a low pressure near Chicago which, in turn, is connected via an occlusion to another weak low near Quincy, Illinois. 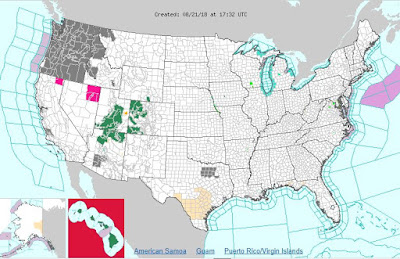 
The situation in the Western United States -- especially the Pacific Northwest -- and into British Columbia remains quite bad with massive wildfire conflagrations and enormous amounts of smoke. 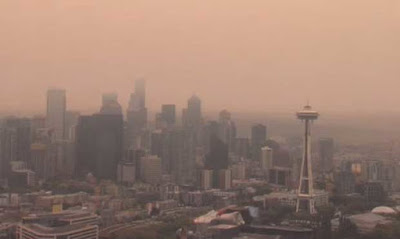 From KIRO -7: Dense smoke from wildfires in British Columbia shrouds downtown Seattle in an eerie coppery-hued pall, August 20, 2018.
This is not how the Pacific Northwest around Seattle (the "Emerald City") is supposed to look.
*******


The smoke has literally socked in the entire region including west of the Cascades across the Seattle/Tacoma area. Needless to say, the air quality is quite unhealthy. The pattern should start to revert to a more normal one by late tomorrow with a flow off the ocean. 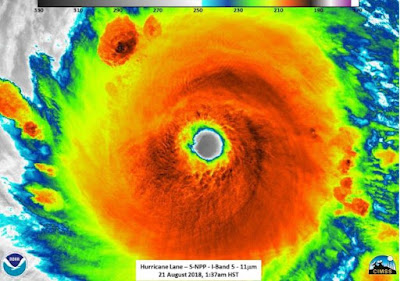 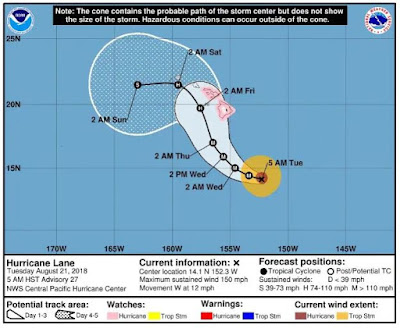 
If this really strikes the Hawaiian Islands, it will be Hurricane Maria and Puerto Rico all over again -- but Trump and the GOP like that idea. Don't think they don't. To the GOP "tribe," this is disaster striking "the right people."
Oh, and the Arctic continues to melt like crazy -- with tremendous consequences for the jet stream and climate system -- with even the oldest and thickest sea ice beginning to break up. 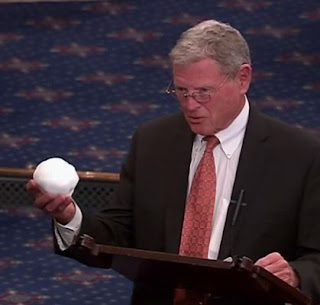 Not to worry, though, because Senator "Bathtub Gin" Grandpa Inhofe "knows" that it's a "Chinese hoax" to take away his guns and fracking juice.

Look at him: Such a great thinker and leader of men.


Oh, yes, the total solar eclipse that I saw in South Carolina was one year ago today. (It took me frickin' 8 months to post that entry.)
OK, signing off now. My plan is to post another entry tonight.
--Regulus
Posted by Regulus at 2:30 PM