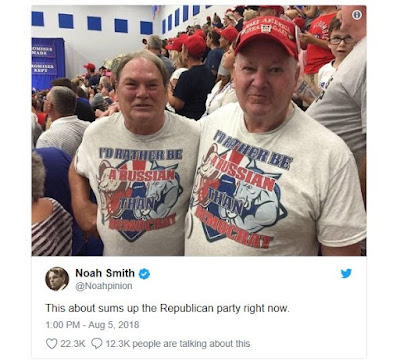 As many others have noted, today's GOP encapsulated in all its vulgarity and awfulness in one photo.
*******
God, I despise this blog -- and all the shitty effort that goes into keeping it -- more than you'll ever know. And I despise God, too, even though He don't exist.
I'm home now, totally unable to post a normal entry, but I'm at least watching a Perry Mason episode.
I went to Trade and then No. 9, where I watched the results from the fucking corrupted, violently-gerrymandered, totally ass-wiped "special" election in "Ohio's 12th" -- and, naturally, the fucking GOP animal won (how else could it be any different?) It was the usual freak-a-zoid shit-show on CNN centered on John King -- all designed to keep you in a shrieking, yowling state for the sake of the corporate media.
Anyway, as I wrote already, I'm sick of this blog.
At the end of the day, the United States only has about 20 to 30 years left before its fouled systems and structures completely collapse into a vortex of farcical catastrophe. And, of course, there will be a bunch of shitty libertarians yammering about how it's their "Constitutional" and "contract law" right to take a shit in the drinking water and the Supreme Court will rule, 5-4, that this is correct.
Actually, if Trump "wins" reelection -- in a Chris Cillizza shit show -- then it will be faster than that.
Oh, yeah, How is M. WADE Shitabillyun? God, I detest him.
OK, I didn't get a chance to write a recap of my Glen Burnie weekend -- which went very well -- but not now. I'm in a shit mood.
--Regulus
Posted by Regulus at 12:05 AM