First up, a nice smooth jazz piece by an accomplished musician …
"Another Day, Another Dream" by Tony Guerrero ft. Gerald Albright from his album of same name (1991)
This song also appeared on Guerrero's 1995 album Now & Then. Guerrero is a prolific musician (as jazz trumpeter), songwriter, and producer. Here is his website.
*******


Next up, one of the greats by The Boss …
"Hungry Heart" by Bruce Springsteen from his album The River (1980)
I remember when this song came out (I was 10 years old). The part about him having a wife and kid "in Baltimore, jack" and going out for a ride and he "never came back" used to bother me a bit.
*******


And we'll end with something strange and yet a real work of musical art …
"Fly" by Nicki Minaj ft. Rihanna from her album Pink Friday (2011)
The video is a strange one -- opening as it does in some post-apocalyptic landscape and with part of it taking place at what is supposed to be the site of a crashed passenger jet. And Minaj gets to do some ninja maneuvers on some ninja-like warriors attacking her. You can read about the video and its synopsis here. 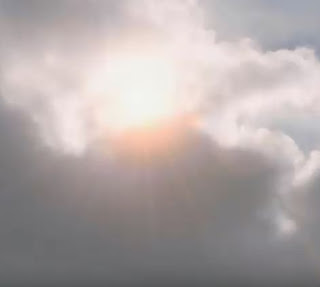 However, the ending of the description -- namely, that the Sun emerges to reveal it has exploded -- doesn't match with what I see. Rather, the video has a hopeful ending. A screenshot of the Sun as it appears at the end of the video Fly is at left.


I realize I've never featured any song with Rihanna in my Jukebox Saturday Night series. Rightly or wrongly, I just don't really like her. 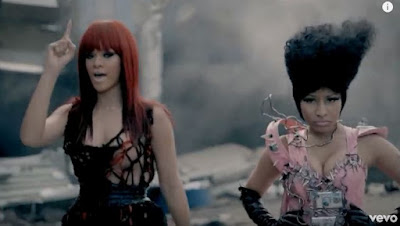 Having said that, she and Minaj really created a very nice song here and the video goes well with it. As for Minaj, she's extremely talented and I just find her fascinating.
OK, that's all for now. Please see my previous entry for an update.
--Regulus
Posted by Regulus at 11:58 PM