(This entry has been in partial draft form for months. I'm finally posting it tonight.) 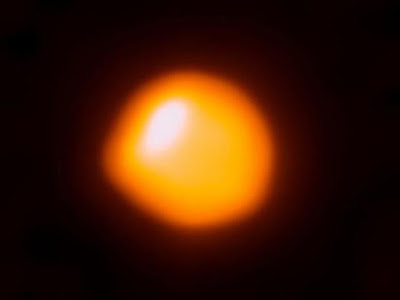 Alpha Orionis. The Hand of Orion. 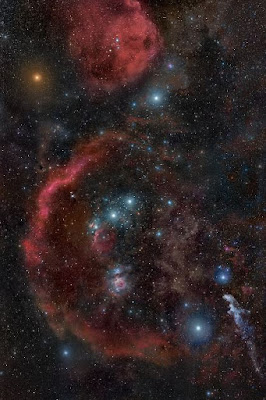 The Betelgeuse star has a rotation period of about 30 years. With this discovery, published in Astronomy & Astrophysics on January 9, 2018, a scientific team under the direction of Pierre Kervella, astronomer at the Paris Observatory, opens new avenues to understand the mechanisms of loss of mass of this type of supergiant star.

The close circumstellar environment of Betelgeuse.
The first link is an overview of the findings and the second contains the full journal article.
Short version of the findings:
At an estimated 700 light years away (although that estimate has varied widely), Betelgeuse is 1,000 times the size of the Sun and about 15 times the mass -- meaning it has an extremely tenuous photosphere. It is a red supergiant in the late stages of its life. 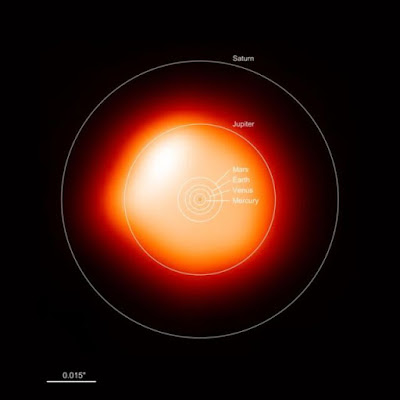 Betelgeuse imaged with ESO ALMA array and our Solar System with planetary orbits of Mercury to Saturn shown schematically to scale.
********

The most recent findings indicate the star rotates at 5-km per second, but it is so gargantuan that it takes 30 years for the surface to complete a rotation. The star's axis of rotation is 20-degrees away from our Solar System -- which is good for us since when it supernovas, any would-be gamma ray burst would not have Earth in its line of sight (and 700 light years is no where near far enough away from a GRB for safety).

Left: Schematic of the angle between Betelgeuse's axis of rotation and the Earth (i.e., our Solar System) 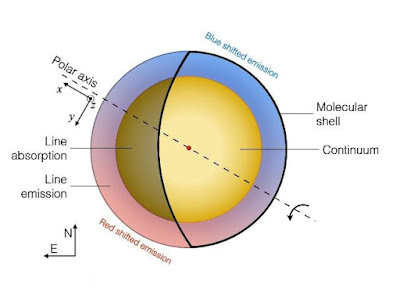 Schematic of Betelgeuse's rotation based upon Doppler shifting of the spectral light, which reveals that the "northwest" part of the surface (from our perspective) is rotating toward Earth and the "southeast" part is rotating away.
*******

From the summary article:


A large and bright hot spot and a dust plume are precisely aligned with the direction of the rotation axis of Betelgeuse as measured with ALMA. This remarkable coincidence suggests that the polar cap of the star is a particularly intense mass-loss region. Further observations in the coming years will make it possible to test this hypothesis and understand the underlying mechanisms. 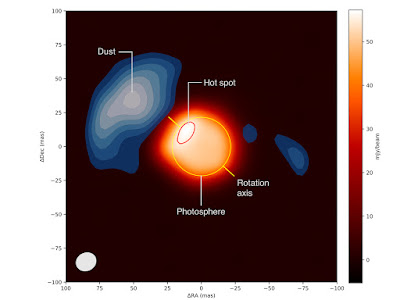 
As for the BIG QUESTION -- When Betelgeuse will go supernova?? -- that will be anytime in the next 100,000 years or so (almost certainly within a million years). And what a truly phenomenal sight it will be -- if humans (or our descendants) are around to see, understand, and appreciate it. Betelgeuse going supernova will be an epochal event -- one that makes an indelible impression on humanity for as long as the species exists. 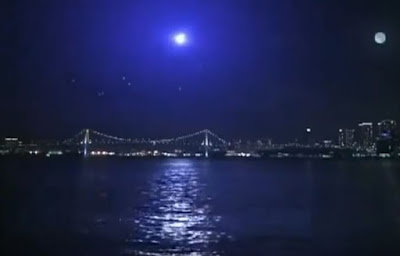 Simulation of Betelgeuse at supernova peak as seen over New York City; this is a screenshot from the YouTube video directly below.
******


So dazzling that it will easily cast shadows in full daylight, supernova Betelgeuse will only last in that state for a few weeks before fading over the course of several months to a year into permanent naked eye invisibility, but the sociological consequences of it will be enormous. It will redirect religious tenets and whole human cosmologies (again, assuming we are around in our present form to see it).
Simulation of when Betelgeuse goes supernova (assuming it does it in the present era).
*******


As for an amazing star a little bit closer to home …
Below are two must-see videos. The first is "Seeing inside the Sun:"
Description: Dr. Robert Stein, professor of Physics and Astronomy at Michigan State Universe has long envisioned a day when he could use supercomputer programs to "see" through the roiling surface of the sun and glimpse its dynamic interior. He describes his quest and offers ideas about what drives the violent outbursts known as coronal mass ejections, or CMEs, known to disrupt the electrical systems that power our civilization.
********

… an amazing half hour YouTube move (complete with wonderful music) that is aptly described as "thermonuclear art" in which we see the incredible fine structure of the Sun's photosphere in a variety of wavelengths (converted to visible).

To be clear, to the human eye, the Sun from space would just look incandescent white.


In space, NASA's Solar Dynamics Observatory, or SDO, keeps an eye on our nearest star 24/7. SDO captures images of the sun in 10 different wavelengths, each of which helps highlight a different temperature of solar material. In this video, we experience SDO images of the sun in unprecedented detail. Presented in ultra-high definition, the video presents the dance of the ultra-hot material on our life-giving star in extraordinary detail, offering an intimate view of the grand forces of the solar system.
Credit: NASA's Goddard Space Flight Center
*******


OK, that's all for now. I'll try to post an entry tomorrow, but it will likely be a brief one. I won't be able to post my usual pair of Saturday entries as I'm not home this weekend.
--Regulus
Posted by Regulus at 11:57 PM