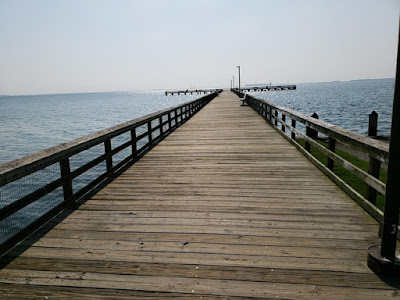 Romancoke Fishing Pier, Kent Island, late morning, August 7, 2018.
"Romancoke"??
That sounds like something served at a debauched affair during the Roman Empire days. Or a drink at a Millennial bar in D.C. My mom took this picture yesterday while visiting a friend who lives on Kent Island. That friend and her husband are going away for a week, and my mom will be housesitting and cat-watching (two cats) while they are away.
*******


This entry is just meant to replace the pair of entries I posted last night. Other than the Ohio special election result -- which pissed me off -- I'm not sure why I was so agitated. I had gone to Trade and No. 9, where everything was fine, and then walked home by about 11:10 p.m. The Jack Dorsey / Alex Jones-on-Twitter thing just really ticked me off.
About that election result, it turns out it hasn't been called yet since even though the Repub is a head by 1,700 votes or so (or about 1 percent), there are provisional ballots. 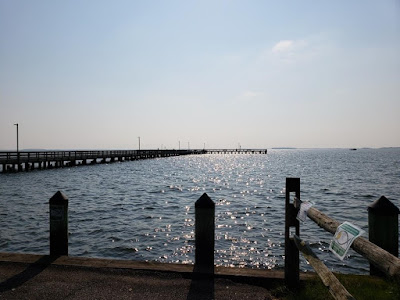 Chesapeake Bay and Romancoke Fishing Pier, Kent Island, morning, August 7, 2018.
To be clear, the Romancoke pier is located on the west side of Kent Island at the dead end of Route 8 -- and so it juts out toward the east into what is shown on Google map as the "Eastern Bay" extension of the Chesapeake Bay.
*******


OK, that's all for now. Tonight is a gym night. My intention is to post an entry thereafter featuring the pics from my weekend visit to Glen Burnie.
--Regulus
Posted by Regulus at 4:58 PM