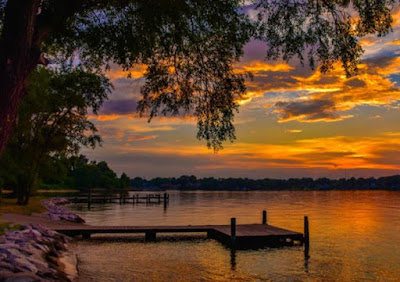 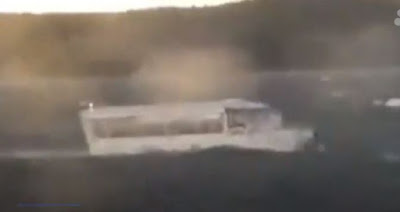 There is, of course, the horrible -- and certainly preventable -- tragedy on Table Rock Lake in Branson, Mo., yesterday evening when one of those stupid "duck boats" sank (right to the bottom in 80 feet of water) in a violent thunderstorm that whipped the normally placid lake into a frenzy, drowning 17 of the 31 people (29 passengers and 2 crew) on board. Story here.
News reports indicate that the ages of the dead ranged from 1 (a baby) to 70 and included 9 of 11 members of one family, as well as the vessel's captain. 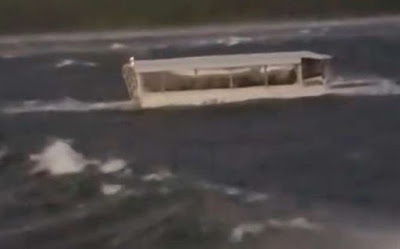 The cellphone footage of the duck boat captain struggling -- and failing -- to keep the craft above the water is rather disturbing as you can see all the people through the windows, many of whom were within minutes of their death. The above images and one below are from that footage.
This is going to be litigated -- and the tragedy relived -- for years. These amphibious tour boats aren't particularly safe as they are prone to sinking -- and the canopy enclosures they feature have been cited as posing a drowning danger in the event the vessel sinks. 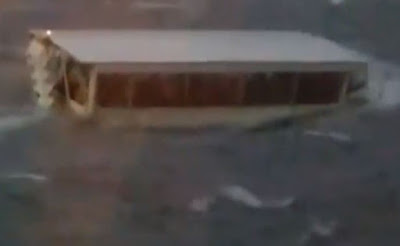 Already the president of Ride the Ducks Branson duck boat business's parent company, Jim Pattison, Jr., claimed the violent storm complex "came out of nowhere," which is complete and total bullshit (a Trump-scale lie) as the storms had been tracked as the mesoscale complex that they were -- likely meeting the definition of a "derecho" -- that had been well-tracked on radar for 9 hours back to central Kansas where they formed, and there were ample NWS warnings in effect well ahead of time. 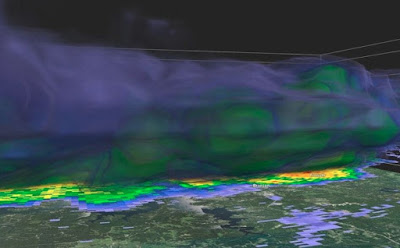 
However, this bullshit is meant to confuse the straightforward issue by implicitly blaming the National Weather Service / meteorologists to avoid any legal liability or criminal negligence. (Of course, this being supermajority Republican Missouri, the state legislature might just pass some law indemnifying the company outright.)
Jason Samenow of the Capital Weather Gang (CWG) has already co-produced this excellent summary of why the storms were anything but "out of nowhere" (link embedded): The violent storm behind the duck boat tragedy was well-predicted, not 'out of nowhere'. 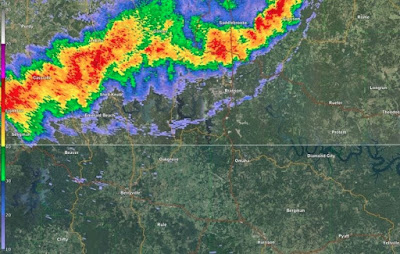 
Some other weather items of note with CWG entry links (embedded in the headlines):
A tropically humid, potentially soggy pattern is progged to set up along the U.S. East Coast including here in the D.C. area next week: Starting Sunday: Oppressive humidity and heavy rain potential lasting for days.
Sub-headline: The soggy pattern, conducive to flooding, may endure for much of next week. 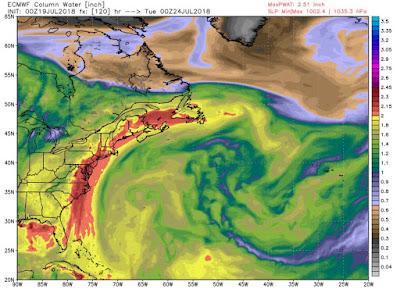 Euro 0Z 19 July 2018 showing precipitable water column (converted to inches) for eastern North America and the Atlantic Ocean, valid hour 120 / 0Z 24 July 2018.
This image was created / prettied up by WxBell.com or one of the other commercial weather outfits that repackage various model data. The same is true for the other images below.
*****


Midsummer Weekend Mid-Atlantic storminess in the offing: Unusual summertime coastal storm set to drench Atlantic beaches and New England this weekend.
Sub-headline: It'll be a wet time as a storm system tracks from the coast of the Carolinas to New England. Washington and Baltimore may just get skirted. 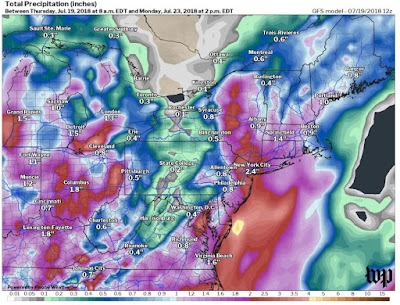 
The above entry was followed-up by one earlier today following a GFS model run showing more rainfall for the immediate D.C. and Baltimore area: Coastal storm likely to soak Washington on Saturday, and it's just the start of a wet pattern.
Sub-headline: A shift in the storm's track means more than an inch of rain could fall across the D.C. area.
Of note, there are already flood watches in effect for much of Delaware, southern New Jersey, and southeastern Pennsylvania. 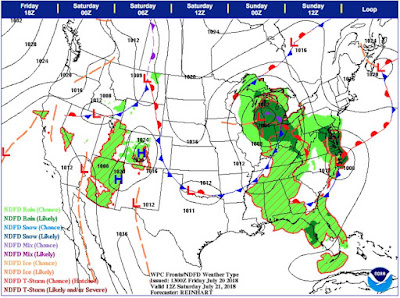 
Then there is a massive heatwave getting underway in the Southern Great Plains and into parts of the Lower Mississippi River valley: A mega-heat wave is gaining strength over Texas and the south-central United States.
Sub-headline: Texas is breaking energy consumption records as the hottest heat wave since 2011 heads toward peak.
Highs are forecasted to reach up to 110F across a large portion of Texas and into Oklahoma the next few days. (Scott Pruitt will like that.)

Euro model forecast for surface (2-m) high temperatures converted into Fahrenheit for the South Central U.S. for July 19 - 23, 2018, looped.
I believe the white numbers represent highs within 3F of daily record highs. Also, note that this is the Euro -- not the GFS, which has been running crazy high because of some change made to the land surface feedback mechanism within the operational model. 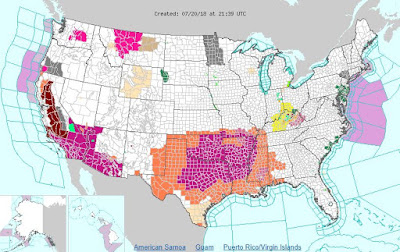 NWS weather advisories updated 2139UTC 20 July 2018.
This is about as extensive an area of excessive heat warnings and excessive heat watches, as well as heat advisories, that I've seen. (Keep in mind that different parts of the country have different criteria heat indices for these weather products.)
*******


Meanwhile, on the other side of the world: Dozens dead in Japan from record-setting, long duration extreme heat event.
Sub-headline: Temperatures soared above 105 degrees Thursday, just a hair below the country's all-time record.
This record heat follows recent massive flooding rains and mudslides in parts of Japan that killed at least 200 people. 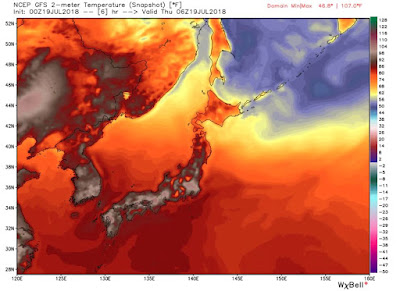 
Continuing with the heat theme in our globally warming TrumpWorld dystopia (even in a place the ethnicity of whose inhabitants he favors): Scorching Scandinavia: Record-breaking heat hits Norway, Finland and Sweden.
Sub-headline: Even as far north as the Arctic Circle, the mercury has come close to 90 degrees. 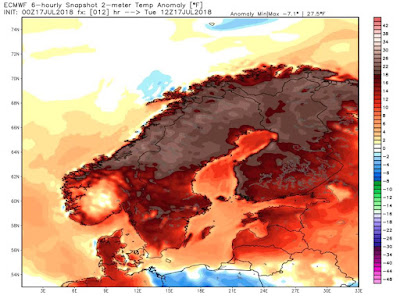 
A number of all-time or near all-time record highs were set in Scandinavia as detailed in the above-linked entry. Many of these temps were in the 90F to 94F range.
This heatwave has resulted in forest fires in parts of Sweden even around the Arctic Circle. 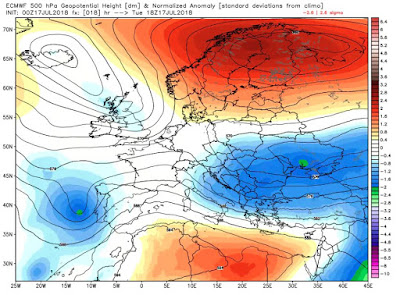 
Shifting gears, let's have a bit of TrumpWorld political commentary … 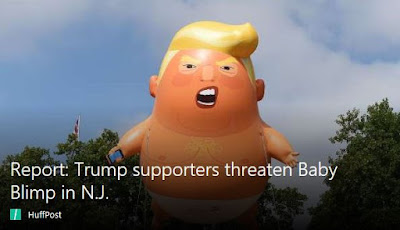 First up, I just have to post this excerpt from Charlie Pierce about Trump's announcement of ANOTHER summit with Vladimir Fucking Putin this fall (right around the time of the midterms) … 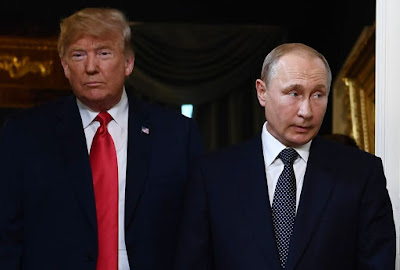 The rest of us have to come to grips with the fact that there is no real mystery any more. The president* of the United States is a reckless vandal who is in thrall to a man whose only real goal in life is to loot his own failing country and hobble this one. Putin is a brutal con-man who has found a transparently bad one that he can play like a cheap violin. How the president* got into this situation almost seems irrelevant at this point; there well may be a video of some icky water-sports in a Moscow hotel, but I still think it's all about money that Russians needed to clean, and that the president* needed to keep his Potemkin empire afloat. In that context, this latest, scarcely believable plot twist has a certain mad logic to it. In for a dime, in for a ruble.
Source here. 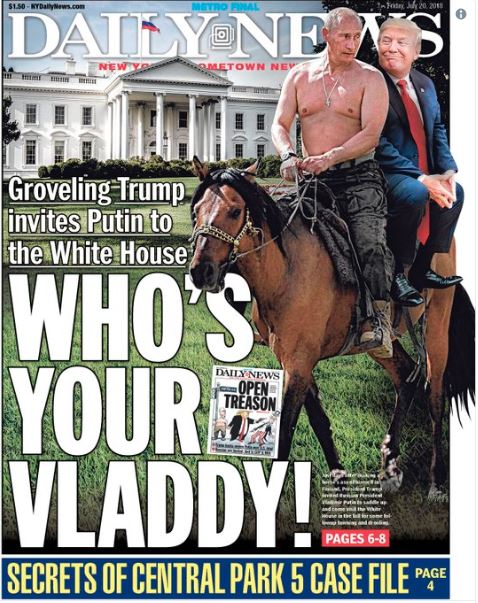 
And in the interest of time, I'll limit myself to just one more political-themed item. The following article appeared in the Washington Post yesterday: How Trump's tariffs on Mexico are taking jobs from U.S. workers. 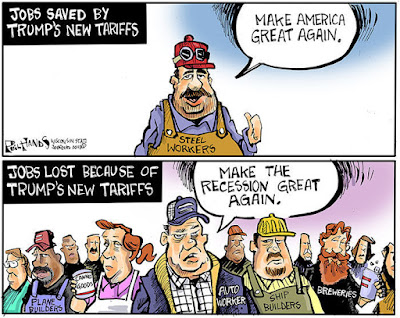 Among the 3,000 or so comments, this one by cspradle2 is still the most-liked ones -- with the commenter citing a quote within the article by someone adversely impacted by the tariffs (i.e., he has been laid off already):
"Philip Bennett, 37, a machine repairman at Mid Continent, appeared close to tears as he talked about his 5-year-old daughter, Aubree, who has a congenital heart condition that has required multiple surgeries. He has health insurance through Mid Continent that covers her."
"'There's a lot of good things that he is doing. But he's affecting me now, and I don't appreciate it,' Bennett, a Trump supporter, said of the president."
That's the crux of it, folks. People like Phillip look on approvingly while trump tears babies from their mothers at the border, breaking families apart without a concern for reunifying them after months apart -- and only feel compassion for themselves. 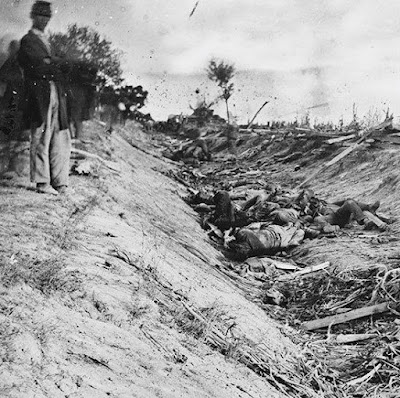 Comment sections for any online site have become the cyber-battlegrounds for our early 21st Century virtual "Red versus Blue" Civil War raging -- with Trump and the Fox News infotainment complex intentionally stoking the "Red" side to white hot intensity and the "Blue" side responding in kind.


Social media in all its passive malevolence and the Russian government in its active malevolence are also fanning the flames.
And on that note, I will end this entry. My next postings will be the usual pair of Saturday night entries.
--Regulus
Posted by Regulus at 9:38 PM