Suddenly, Summer: Some Solstice Solicitations on Dakhla, Western Sahara and the Anti-Atlas Mountains of Morocco Plus Brief Update 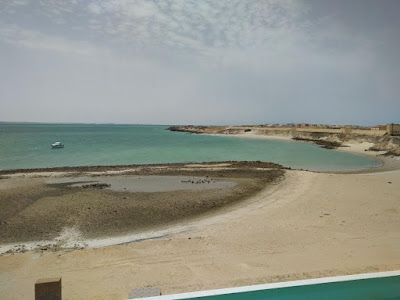 A lagoon in Dakhla, Western Sahara, June 19, 2018.
Dakhla, a seaside city in Western Sahara, is located on the Río de Oro Peninsula (or Wad ad-Dahab) with the Atlantic Ocean on one side and Dakhla Bay on the other. I believe this picture was taken "bayside."
My friend Andrea took this picture this past Tuesday. She was in Dakhla with Imara. Recall that she and Imara are now living in Morocco and might be there for a couple of years. I would like to visit her at some point -- perhaps 2019 and definitely not during Ramadan. 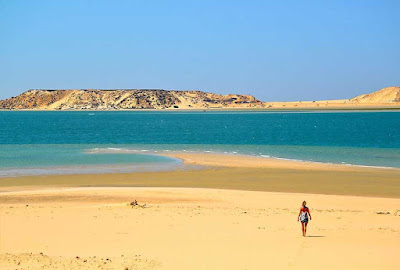 View of the beach and shallow, turquoise sea off Dakhla, Western Sahara.
*******


I'd also like to visit Dakhla in Western Sahara. Indeed, I've written about it previously on my blog, in particular, in this entry almost five years ago. As for the curiously named country of Western Sahara, it is a disputed territory that is effectively ruled by Morocco, but part of which is the semi-recognized state of the Sahrawi Arab Democratic Republic). I think "Sahrawi" is "Sahara" in Arabic. 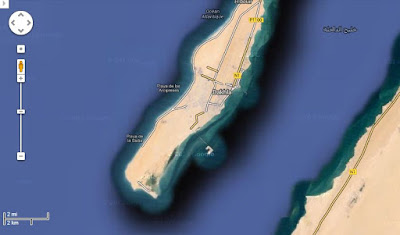 
I featured the above and below Google aerial views in that entry. The one directly below gives a bit more detail of the city. The "downtown" area appears to be on the bay side. 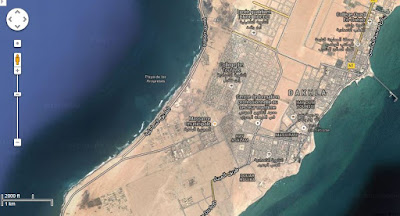 
Thus, Dakhla is a coastal city located on the Atlantic Ocean at the edge of the vast Sahara Desert. While thoroughly "hyper" arid -- receiving barely 1 inch of rainfall in a typical year -- it's seaside location and windy weather (probably due to land-sea temperature contrast) has turned Dakhla into a sort of windsurfing / kitesurfing mecca.
(Yes, "mecca" -- no pun intended even though this is an Arab / Islamic country.) 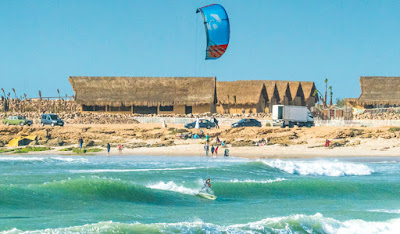 
My own interest in Western Sahara stems from the fact that it appears to be the location on the African continent that "fit" into that portion of North America that is the Mid-Atlantic coastline way back when Pangaea existed (or at least in whatever form the African and North American coastlines had at the time)
Thus, what is now the coastline of Western Sahara and my home-state of New Jersey were once united -- or, alternatively, were united. What's more, I like to think that the place where is located my hometown of Long Branch, N.J., "touched" the place where is located Dakhla, Western Sahara. 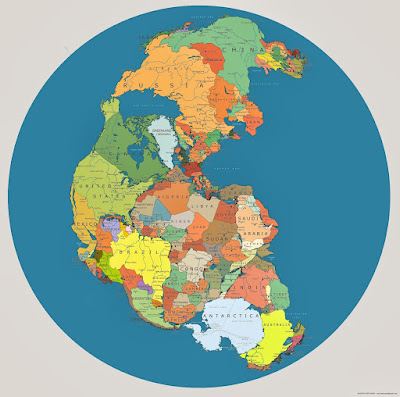 Pangaea approximated with the current shape of the continents and present political boundaries. 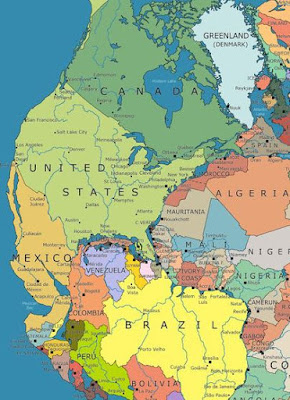 Western Sahara and Morocco were linked to what is now the Northeastern U.S. coastline up to Nova Scotia. Of course, the coastline of North America was likely somewhat different -- New England likely didn't jut out so prominently the way it does from Connecticut northward. That topology is likely the consequence of much later glaciations during multiple ice ages.


I should also point out that the place where the two regions were linked was probably somewhere a thousand miles or more to the east-southeast of where the Mid-Atlantic coastline is today. What's more, looking at this map, it is easy to see why the Appalachians -- as a continental collision mountain range that may have once risen to Himalayan heights -- exist where they do. 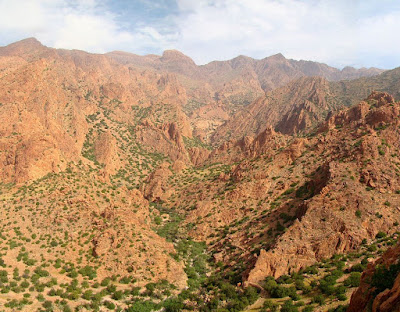 
Indeed, the southwestern "forward" portion of the Atlas Mountains known as the "Anti-Atlas" *IS* the same range as the Appalachians -- formed in the Alleghanian Orogeny -- but just rifted apart across 4,000 miles and 200 million years.(The main (High and Middle) Atlas Mountains are being lofted higher as Africa pushes into western and central Europe, sealing up the Mediterranean.) 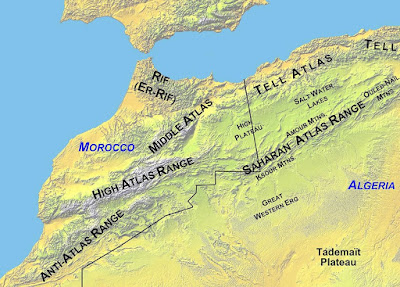 Various ranges of the Atlas Mountains complex across northwestern Africa.
******* 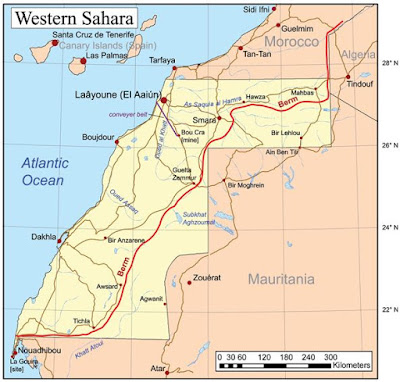 
Using 69 miles as the distance between 1° of latitude -- that too varies a bit between the poles and the Equator since the Earth is slightly spheroidal -- that works out to 0.9 miles, which means that parts of Dakhla, in fact, are ON the Tropic of Cancer. 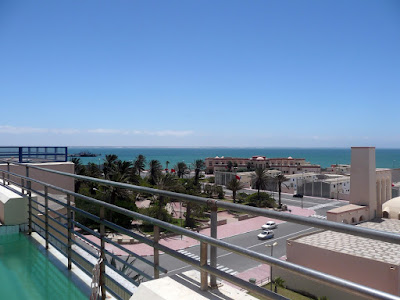 
This is relevant to this entry in that today (Thursday, June 21st) was the first day of summer -- the Summer Solstice occurring at 6:07 a.m. EDT in the Northern Hemisphere and the longest day in terms of length of daylight, but not the day of the earliest sunrises (that already occurred earlier this month) or the latest sunsets (that has yet to occur in the next week to ten days). 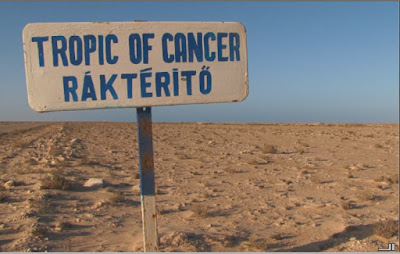 
The 6:07 a.m. EDT translates to 5:07 a.m. Eastern Standard Time, i.e., true Sun time -- and the time zone for Western Sahara and Morocco is five hours ahead of EDT, which is the same as the UK (presently on British Summer Time or GMT+1). This means the solstice occurred at 11:07 a.m. local time.

Left: A schematic of the Earth's elliptical orbit around the Sun (highly exaggerated) in relation to the solstices and equinoxes.

This puts the exact spot of LOCAL NOON on the time of this year's NH Summer Solstice -- corresponding to the PRESISE MOMENT when a beam of sunlight cast from the midpoint of the solar "disk" fell PRECISELY perpendicularly on the Tropic of Cancer -- somewhat further east, probably somewhere near the Algerian/Libyan border.


However, at local noon in Dakhla earlier today, you couldn't possibly note any difference -- the Sun would be DIRECTLY overhead.
Changing subjects …


As a brief update, I'm home watching a good Perry Mason episode on MeTV, namely, "The Case Of The Ruinous Road. This episode features Meg Wyllie.
I'm back from the gym, where I had a good, multipart gym workout. 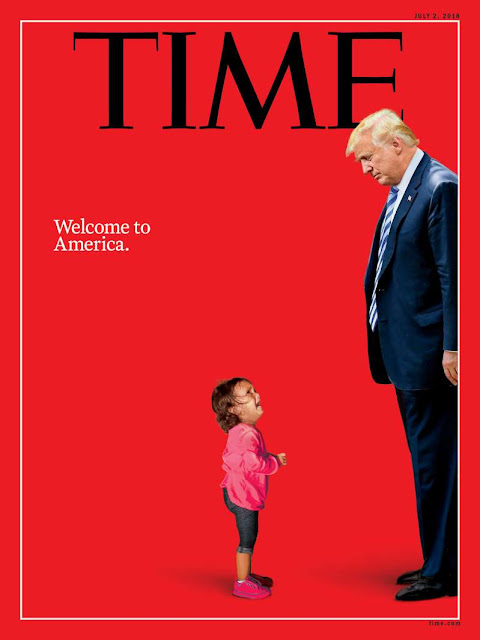 
Well, I was going to post a follow-up to the Trump-triggered immigrant humanitarian crisis story that is still ongoing. It's a humanitarian crisis and Trump-made disaster complete with the horror of the forced separation of thousands of parents from their young children and even toddlers -- Trump's weird and poorly written Executive Order notwithstanding -- and now being housed in sundry facilities courtesy those ICE animals. (OK, it's also CBP agents on the border.)

However, it's late on Thursday and I just can't start a full-blown and complicated entry. 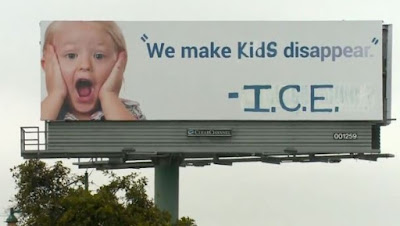 An appropriately-defaced billboard in Emeryville, Calif., June 22, 2018. (Image featured here after-the-fact of the original entry posting time.)
Fox & Friends got off on this since it falls in to the catch-all category of "cultural wall" plus immigration. I am glad to hear this, though.
*******


It is a warm, humid night with air temp in the mid-to-upper 70s Fahrenheit (78F at KDCA, 73F at KBWI, and 74F at KIAD at the midnight hour) with dew points around 69F. There is a quasi-stationary frontal boundary draped from the Tidewater area back into West Virginia and thence along the Ohio-Kentucky border.
The front is forecasted to push northward as a warm front toward the Metro D.C. and Baltimore areas with rounds of showers and thunderstorms. There has been a lot of activity over parts of central Virginia today and the radar shows it is creeping to the north-northeast. 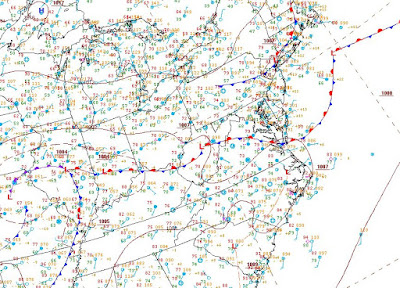 
Of note, there was a cluster of showers and t-storms on Tuesday that dropped over an inch of rain at KDCA (1.12" to be exact) but not much at the two other airport spots.


For tomorrow (Friday), I am tentatively supposed to have lunch with "T.J." at Station 4 in SW D.C., not far from where I work (L'Enfant Plaza). Tomorrow night, I may meet Fred upstairs at Annie's and then go over to Trade and/or No. 9. The usual.
Saturday should be just a regular sleep-in-late/gym day and nighttime at home doing laundry, making dinner, blogging, and watching the MeTV Super Sci-Fi Saturday Night lineup into the wee hours.
On Sunday, Lynda is visiting me for the afternoon here in D.C. I need to figure out what we should do -- something involving being in Georgetown for at least part of the time. 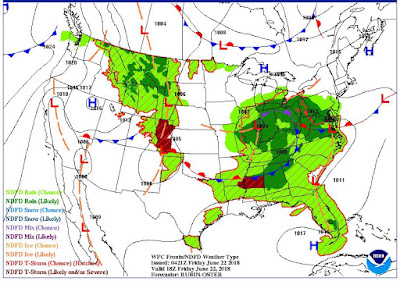 
I am still behind on the series of reports I need to have done by the end of the month (or at the very latest, the following week with its July 4th holiday that falls on Wednesday this year).
OK, I'm going to sign off for now. I actually completed this entry at 1 a.m. Friday, but I briefly initially posted it just before midnight so that it would have a Thursday time stamp.
--Regulus