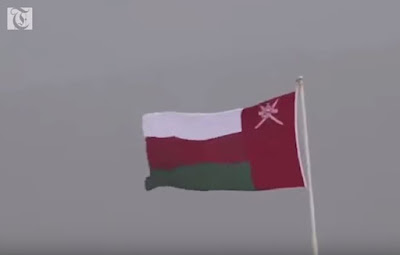 Screenshot of the Omani flag blowing in the strengthening wind as Tropical Cyclone Mekunu bears down upon the coastal city of Salalah, May 25, 2018.
This is a screenshot from the second of the two Times of Oman videos embedded below.
*******


I've been remiss in not discussing this, but I'll try to make it up in this entry, specifically, powerful (Tropical) Cyclone Mekunu that is striking southern and southwestern Oman right about as I write this entry as a historic category 3 equivalent hurricane. 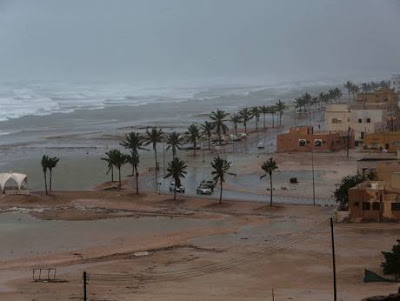 Powerful waves strike the shoreline of Oman in the port city of Salalah on the Arabian Sea as Cyclone Mekunu approaches, May 25, 2018; photo AFP; source here.
*******


The satellite, radar, model output, and weather visualization images in this entry are primarily from two of the three CWG entries linked below. Other images are from Oman's Directorate General of Meteorology website (also linked below), as well as Omani news sites, and (in one instance), the Weather Channel's website. 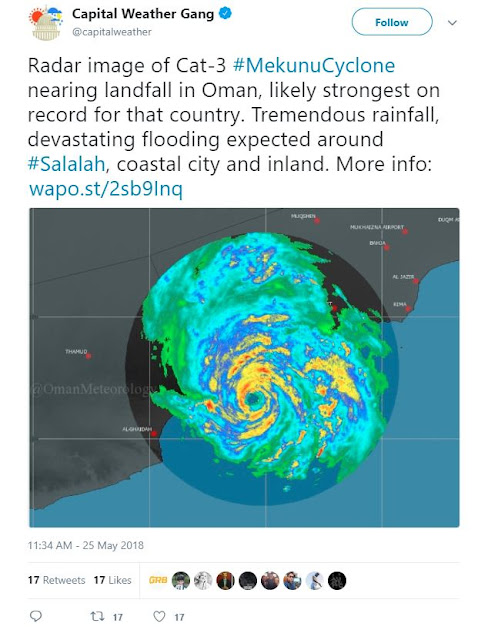 Radar image of Cyclone Mekenu approaching the coast of Oman, May 25, 2018.
This is from a CWG tweet; I'm unsure where they got such a good radar image for Oman.
*******


With estimated sustained winds of 115 mph or a low-end category 3, Cyclone Mekunu is the strongest tropical cyclone to strike Oman in the modern era, and it is taking direct aim at the country's second largest city, Salalah, a port and tourism center with a population of approximately 200,000 people. 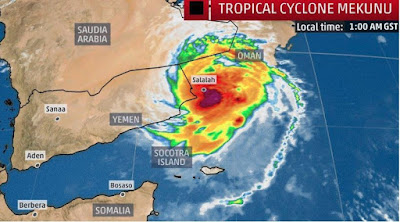 
There has already been at least one fatality in Oman -- a 12-year old girl -- and reportedly 40 people are missing on the disputed (and ecologically wonderous) Yemeni island of Socotra as a result of the cyclone. 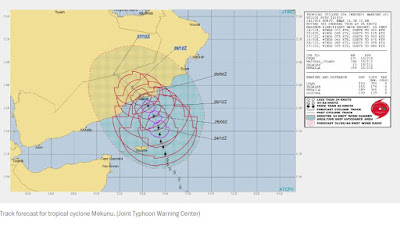 
As noted in yesterday's CWG entry (second link below): On Thursday, the Joint Typhoon Warning Center said conditions are favorable for the storm to modestly intensify in the final 24 to 36 hours before landfall. Ocean temperatures in the storm’s path are in the mid-80s (near 30 Celsius), providing ample fuel for the storm to feed on. Once it moves over land, it is then forecast to weaken rapidly. 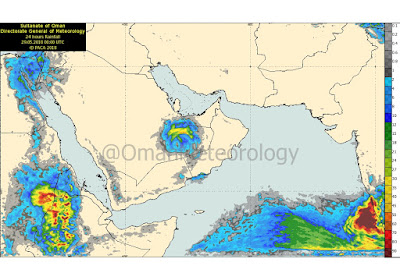 Output from the Consortium for Small-scale Modeling (COSMO) model from the DGM/PACA website showing rainfall from Cyclone Mekunu having moved inland over the Arabian Peninsula.
This model appears to have a time stamp of 0Z May 25, 2018 and valid at hour 96 or 0Z May 29, 2018 (if I'm reading it correctly). It was actually animated but it looks like I only was able to download just one still image.
*******


Rainfall amounts at and near where the eye makes landfall could be in the 12 to 24 inch range with surrounding areas getting 6 to 12 inches and falling off quickly thereafter, but still a significant portion of southern Oman could receive heavy rainfall -- and in that desert sultanate, like anywhere else on the Arabian peninsula, even a bit of rain falling too quickly on any sort of terrain can cause dangerous mudslides and flooding. 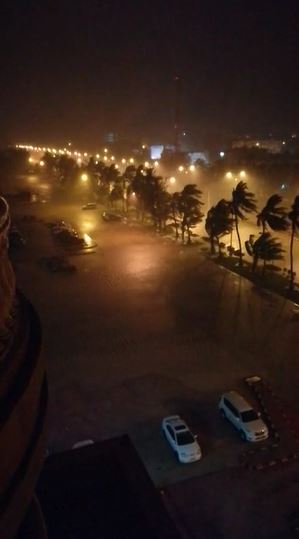 Left: Screenshot of a Vimeo-posted video showing squally rains lashing the coastal city of Sur, Oman located about 300km up the coast from Salalah and 150km southeast of Muscat, late night May 25, 2018.

Sur receives on averagea about 3.2 inches of rainfall per year. It will probably get at least that amount tonight.


Here are a couple of recent model-forecasted rainfall amounts for region: 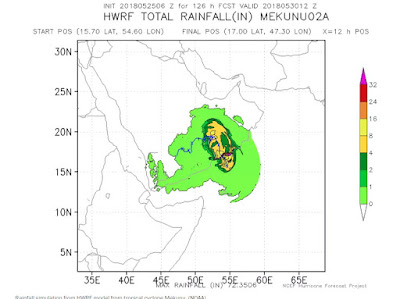 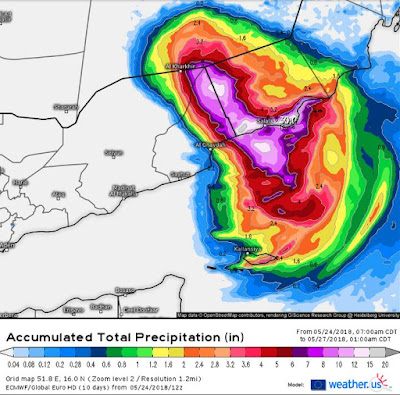 European 12Z May 24, 2018 model showing 3-day precipitation totals -- converted into inches -- for the southern Arabian peninsula from Cyclone Mekunu, as prettied up by Weather Underground.
*******


Cyclone Mekunu follows just days after Cyclone Sagar made landfall in Somalia earlier this week as the strongest storm in recorded history to hit that country and the westernmost landfalling tropical cyclone in the North Indian Ocean basin.


Here are some CWG entries (links embedded):
May 25th: Oman and Yemen brace for tropical cyclone Mekunu, strongest on record to threaten the region
May 24th: Cyclone Mekunu poses severe and possibly unprecedented storm threat to Oman
May 23rd: Middle East mayhem: After rare tropical cyclone Sagar devastates Somalia, a second aims for Oman
Here is an extended portion of today's CWG entry, minus the embedded links:
Devastating flash flooding, a dangerous storm surge and damaging winds are all likely to afflict the popular tourist destination [of Salalah].
The city, which only averages five inches of rain per year, may double that amount in 24 hours. It had already received almost 3 inches as of Friday evening. Model forecasts show the potential for 8 to 16 inches of rain. Such copious rainfall over the dry terrain in a short time is likely to overwhelm drainage systems and flood low-lying areas. 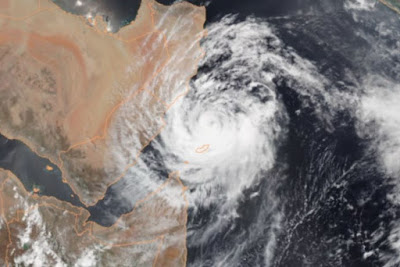 
Adding to flooding concerns, the storm will push a substantial storm surge onto the coast, raising the water level at least several feet above normally dry land just to the east of where it makes landfall. Low-lying homes, businesses and roads near the coast may be engulfed by ocean water. And waves up to 32 feet high could slam ashore.
Wind gusts of more than 100 mph inside the storm’s core are likely to damage buildings and generate widespread power outages. 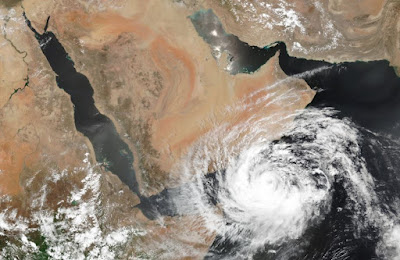 High-res satellite image showing Cyclone Mekunu nearing Oman, May 25, 2018; credit NOAA/NESDIS.
This image looks almost identical to the one above -- which I got from the leading CWG entry and it said "credit NASA" -- but it comes from the NOAA/NESDIS site and asks to credit it.
*******


Farther inland, in southern Oman and eastern Yemen, especially in the elevated terrain, rainfall and flash flooding are likely to become the most dangerous hazard. The storm’s winds will rapidly weaken as the storm moves inland, but it will have a tremendous amount of tropical moisture to unload. 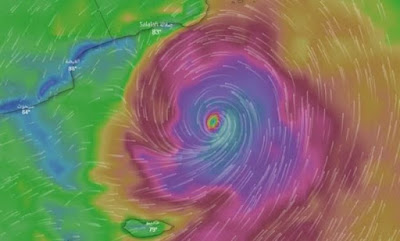 
The mountainous zone north of Salalah could be especially hard hit.
“Moisture-laden winds will plow directly into the Qara Mountains and get forced upward,” wrote Bob Henson and Jeff Masters at Weather Underground Category 6 blog. "Torrential runoff can be expected from these hillsides onto the coastal plain." 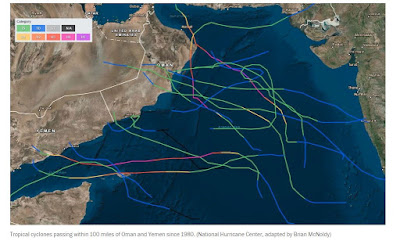 Map of all tropical cyclones whose centers passed within 100 miles of Oman and Yemen since 1980; Source National Hurricane Center, adapted by Brian McNoldy.
******* 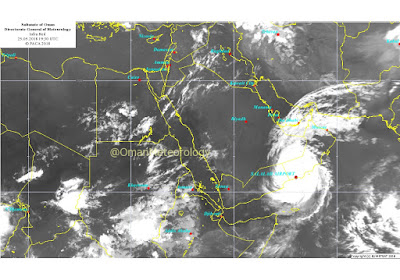 
The Times of Oman and other area media said government agencies undertook a massive preparation effort ahead of the potentially historic storm. Salalah’s port evacuated all ships. A major hospital was evacuated. Coastal roads were closed. Shelters were opened. Low-lying areas were sandbagged. Building cranes were secured. 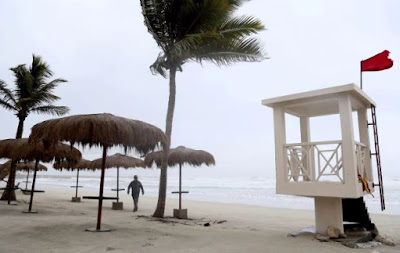 
According to this AP article carried by the Post:
Powerful cyclones are rare in Oman. Over a roughly 100-year period ending in 1996, only 17 recorded cyclones struck the sultanate on the eastern edge of the Arabian Peninsula. In 2007, Cyclone Gonu tore through Oman and later even reached Iran, causing $4 billion in damage in Oman alone and killing over 70 people across the Mideast.
The last hurricane-strength storm to strike within 160 kilometers (100 miles) of Salalah came in May 1959, according to the U.S. National Oceanic and Atmospheric Administration’s archives. However, that cyclone was categorized as a Category 1 hurricane, meaning it only had winds of up to 152 kph (95 mph).
I'm curious about that 100-year period ending 1996 -- why 1996? That was 22 years ago. I'm wondering if the AP writer relayed the information correctly. 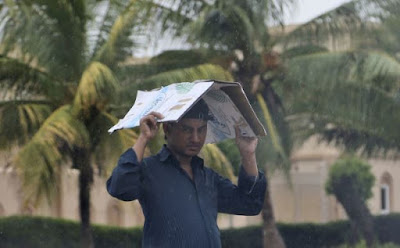 
Here are some recent videos from the Times of Oman's YouTube page:
A young lady with the Times of Oman giving an update on the approaching tropical cyclone.
She looks a bit more "Western" than I would have expected in a rather Muslim Sultanate of a country such as Oman.
*******

Here is the AP news wire feed that is being updated and also carried by the Post.
Concerning Tropical Cyclone Sagar, it struck northwestern Somalia last weekend killing at least 31 people. 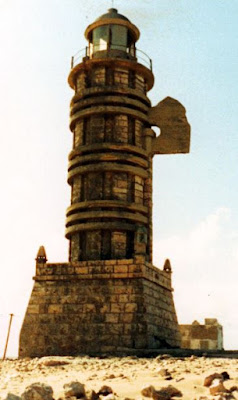 I guess it was a stormy day at that otherwise arid, desolate apex of the Horn of Africa known as Cape Guardafui with its relic Francesco Crispi lighthouse that was erected during the Italian colonial occupation in now quasi-lawless Somalia.

Left: An old picture o the Francesco Crispi lighthouse at Cape Guardafui, Puntland, Somalia; the structure no longer has a top -- much like Somalia, it was decapitated.


In the case of Cyclone Chapala in November 2015, it ended up striking near Al Mukalla with the most intense part of the storm traversing relatively sparsely populated sections of coastal Yemen, and the resulting official death toll is just 9, although I'm skeptical of that; see my blog entry here.
As I noted back during Chapala in this entry, here the website for the Directorate General of Meteorology within Oman's Public Authority for Civil Aviation (PACA). (It is partially in Arabic and partially in English.)
And here it the YouTube channel for the Directorate. There is a small rotating set of on-air meteorologists including my main Omani weatherman, this man: 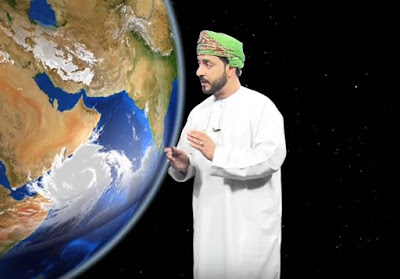 I wish I knew is name -- or understood a single word he is saying. Here he is in the most recent update in which he appeared dated May 24th:
He's got some nice swag and even a bit of bling, Islamic-style, goin' on there. Here is another screenshot image of him from his May 24th appearance (he doesn't appear everyday -- there is another guy and a woman who also do the segments): 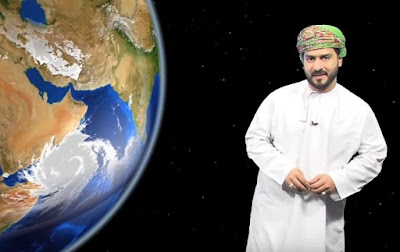 Of note, he doesn't look any different (older) than he did three years ago. I suppose it's all that healthy diet, no alcohol, and general clean living, plus being in your late 20s or early 30s.
Maybe he went to Salalah to "storm chase" the tropical cyclone.
*******


OK, that's all for now. I'll post a follow-up entry about the cyclone and its aftermath in an upcoming entry. My next planned entry -- or pair of entries -- is tomorrow (Saturday) night, so it might be part of my Saturday evening post.
--Regulus
Posted by Regulus at 7:12 PM

That's a lot of rain for the Empty Quarter coming up right there. It's interesting that region was semi-arid at most not long ago (less than 2,000 years even) and before that, steppe to savanna on the early Holocene.I wonder if an 1-2 C warming could drastically change the current picture on these lands.

Possibly. The reason for the desertification of that area following the last Ice Age is because of the general circulation pattern with subtropical subsidence, and I don't know if a warmer planet overall would change this pattern. What seems a decent bet is that the Arabian Sea would be warmer and hence more prone to stronger tropical cyclones that could strike the Arabian peninsula more often. Perhaps there could even be an actual wet season that would set up along the southern Arabian peninsula.