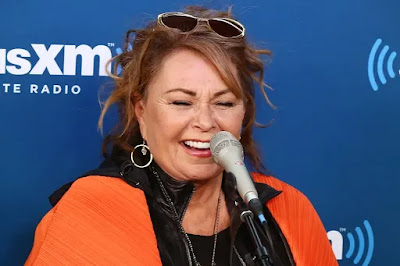 
The big news today is ABC's abrupt decision to cancel the Roseanne show reboot -- following its very successful first reason return -- followed Roseanne Barr's weekend twitter tirade that included saying that George Soros (one of the leading demonized bête noire figures on the American political right) is really a Nazi and likening former Obama senior aide Valerie Jarrett to a Planet of the Apes monkey.
Here are some articles on what happened: 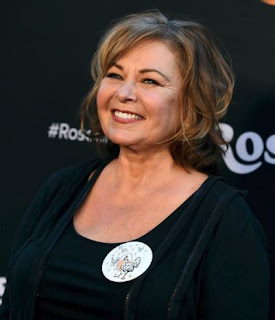 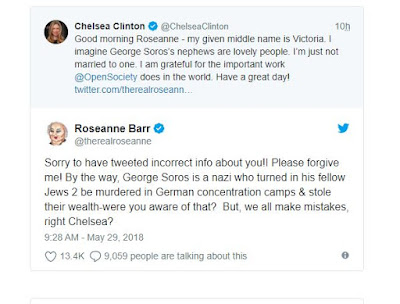 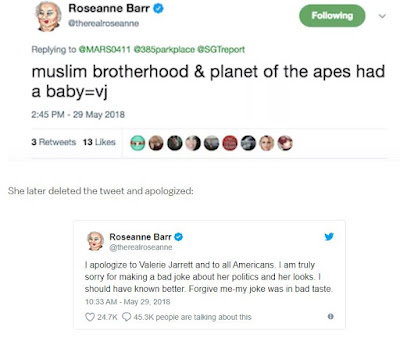 
Barr apologized for the Jarrett tweet and claimed it was a "bad taste" joke. She also said she was "leaving" twitter. 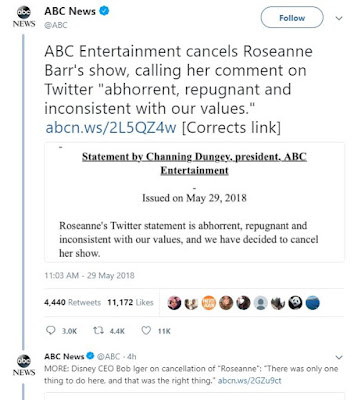 That got her show swiftly cancelled by ABC. The decision was made -- or at least announced -- by Channing Dungey, President of ABC Entertainment, and also an African American woman. Ms. Dungey called Barr's comments "abhorrent, repugnant, and inconsistent with our values" (see image of above message / tweet).
In addition, Barr lost her ICM agent, which dropped her like the proverbial hot potato. 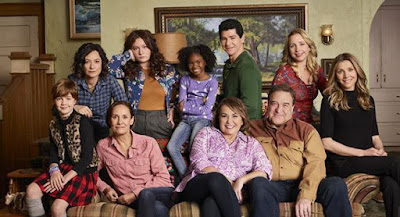 
The really awful thing in all of this is that the rest of the show's cast are out of jobs, not to mention robbing them of additional acting career success and enjoyment. Roseanne itself was tackling some interesting Trump-era dynamics in a struggling, seemingly downwardly immobile, working class family. To use an apt term, the show was capturing a certain zeitgeist in the Age of Trump. 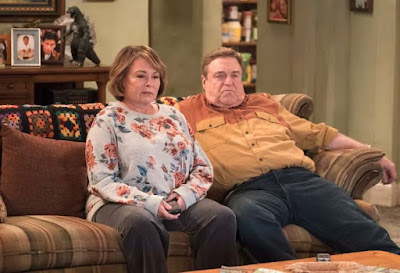 I've always thought that Roseanne herself was "legit" and even a relatively good person -- who came from a difficult background -- not to mention a talented comedian who spoke to so many people. However, it's clear she's gone quite bananas and her extreme political beliefs have led her into the fevered Info Wars swamp. This includes ugly Trump-style race-baiting and outright racism.
Oddly enough, she arrived at this place from a far-left direction -- case in point, she ran for president as part of the Peace and Justice Party and claimed the Boston Marathon bombing was really "contrived" by then-President Obama to do away with the Second Amendment.

This Vox.com piece -- not the same one as linked above -- quotes a National Review article describing Barr's beliefs:

Roseanne is a Trump-supporting populist, but the populist tradition she represents is one born not of canny critique of political and economic stagnation but of paranoid ignorance. Her populism begins from the premise that absolutely anything or anyone exercising power in American society -- from Paul Ryan to organized Christianity to the Monsanto Corporation -- obtained that authority illegitimately and relies on various forms of black magic to keep it.

And now she blew up her own TV show reboot because she couldn't control her mouth (or her tweets). Dumb.


I need to note this tweet from Michael Fishman, the actor who played D.J. Conner on Roseanne during its original run and in the reboot: 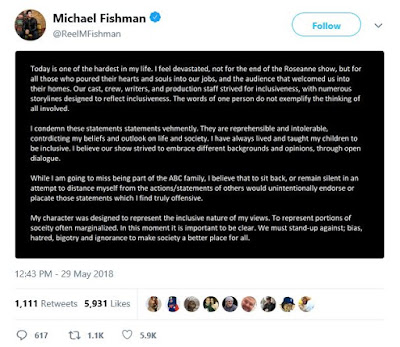 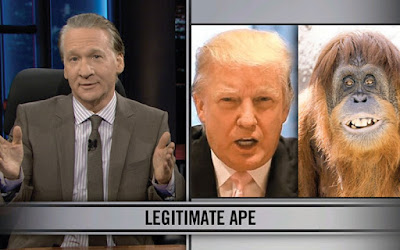 "Wait, Bill Maher makes comparisons to Trump being a gorilla all the time? They get classified as 'jokes' by the media and he is of course allowed to keep his show and not have his life ruined," he tweeted Tuesday. "The difference? Bill Maher is a liberal, Roseanne is a free-thinking Trump supporter." 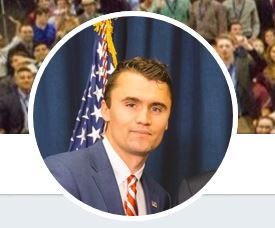 Charlie Kirk (pictured left) is highly representative of American rightwing thinking in that he truly is incapable of grasping the existential difference underlying what Barr was expressing and Maher's Trump-orangutan comparison.


Charlie Kirk is also a walking clueless caricature of the term "white privilege."
End of Update and of Entry.