Jukebox Saturday Night for May 5th, 2018: The Cozy, Talky, Pretty, and Mooki-Dusky Edition


Let's keep up the nice pace ...
"It's The Talk of The Town" from the album Jackie Gleason Presents Music to Change Her Mind (1956)
"It's the Talk of the Town" is one of the songs featured by Jackie Gleason in the albums he produced during his 1950s musical period. The song was originally written by Jerry Livingston with lyrics by Marty Symes and Al J. Neiburg and released in 1933. That same year, a hit version was released by Glen Gray and the Casa Loma Orchestra with vocals by Kenny Sargent.
Here is a little bit more about that album. I last featured Jackie Gleason music in this Jukebox Saturday Night entry nearly 3-1/2 years ago.
*******

"Pretty Girl Rock" by Keri Hilson from her album No Boys Allowed (2010)
As I wrote when I previously featured it, Ms. Hilson pays tribute to a number of iconic American female performers of the 20th and early 21st Century, gliding easily through the period costumes while singing smoothly, confidently, and ably. All in all, a fun and enjoyable video.
*******

"Mooki Ana Low-hey" by David Mitcham as featured in the BBC Series "South Pacific" ("Wild Pacific" in the U.S.) (2009)
This song was featured in the episode "Endless Blue" -- and the song is only part of this segment. As for the female vocalist, I don't know who she is, nor to I know what the lyrics mean. However, I was able to find this information. South Pacific was narrated by Benedict Cumberbatch while the "American" version -- Wild Pacific -- was narrated by Mike Rowe. 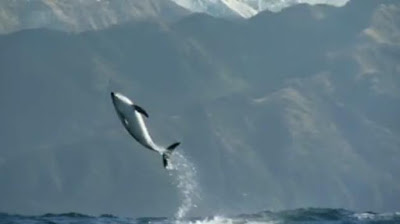 Screenshot of one of the leaping dusky dolphins.
Watching the hyper-acrobatic dusky dolphins flip, jump, corkscrew, and just all-around delightfully dance in the cold waters off Kaikoura on New Zealand's South Island is just astonishing and wonderful. (I featured this in a long-ago blog entry in the early days of my Regulus blog.) 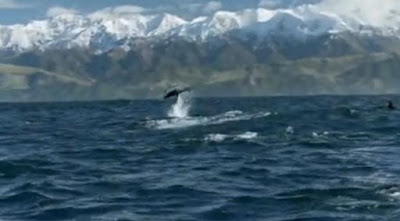 The snow-capped Southern Alps of New Zealand's South Island form the background of this segment of "Endless Blue" in the BBC Series South Pacific featuring a dusky dolphin leaping out of the Pacific waters off Kaikoura.
*******


OK, that's all for now. Please see my previous entry for an update. My next planned entry won't be until late Monday or early Tuesday.
--Regulus
Posted by Regulus at 11:57 PM