In lieu of a Friday Night Creature Feature, I'm going to post something quite horrifying in the real world ... 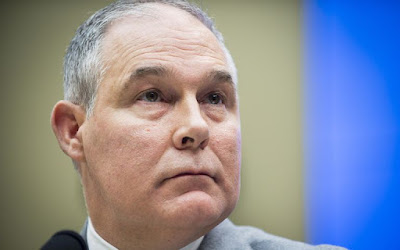 ... to that end, this this entry is dedicated to the corruption and malevolence of Trump's EPA Administrator Scott Pruitt.
Let's start out by stipulating that it is basically impossible to overstate the cartoon-like levels of corruption and moral perversion embodied in Scott Pruitt -- characteristics borne of a sort of megalomania married to American fundamentalist Protestantism -- that is endemic in EPA Administrator Scott Pruitt, one of the key members of Trump's kakistocracy. 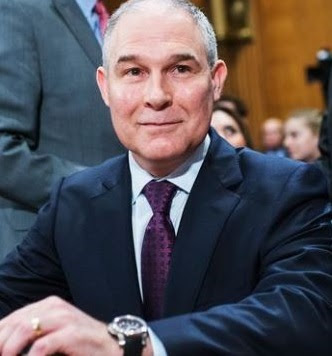 Charlie Pierce refers to Pruitt as a "energy industry finger puppet" -- and for good reason, since Pruitt's entire mission is to destroy everything the EPA does for the oil and natural gas industry, fracking and all. 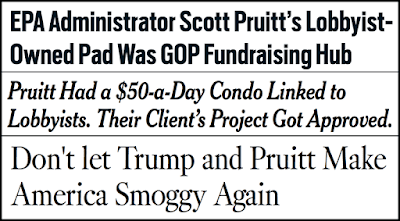 Having said that, it would be very difficult for me to give a comprehensive survey of Pruitt's mind-bending levels of corruption and conflict of interest that produces an EPA Administrator who is a complete perversion of every aspect of the agency's mission, but as one of the articles below is headlined, Pruitt's is effectively "too corrupt to fail." What's more, given the morality and ethics in Trump-World, Donald Trump is likely to keep him at all costs. 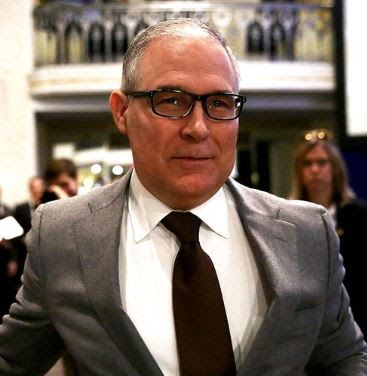 So instead of going into a detailed recounting, I'm instead going to post links to a series of pieces that discuss the self-parodying levels of corruption of Pruitt. This includes a link to a story discussing the fact that Pruitt is almost LITERALLY in bed with lobbyists of the fossil fuel industry by renting at an absurdly low rent ($50/night and only when he is there) a Capitol Hill row house / gathering place for GOP politicians and lobbyists) owned by an energy lobbyist -- Steven Hart -- whose firm pushed for a controversial gas pipeline that Pruitt, naturally, approved). 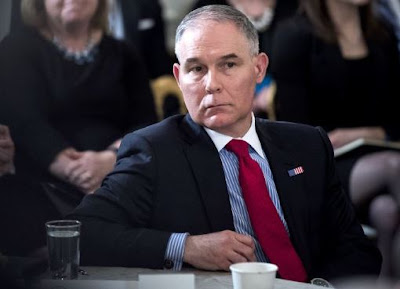 Hart also has bankrolled Pruitt’s career back in Oklahoma as a state legislator and latter the state attorney general and has held GOP fundraisers in that same townhouse while Pruitt was staying there. Oh, and the $50/night is being picked up by the government (read: taxpayer). (No surprise on the Oklahoma connection. He's right up Governor Mary's alley.) 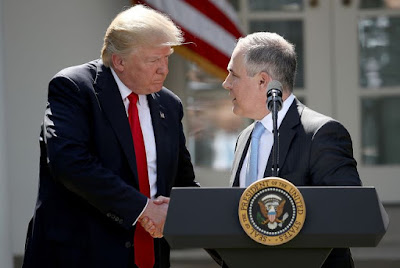 Then there is the hundreds of thousands of dollars spent on First Class flights all over the country and world (Pruitt said the coach class "too toxic" politically for him to abide), the $43,000 soundproof phone booth to call his energy lobbyist cronies, and over three-quarters of a million dollars (and steadily rising) spent on a 20-person security detail. (Pruitt seems to have some combination of deep paranoia about enemies trying to harm him along with grandiose ambitions of running for the Senate and, eventually, President.)
Pruitt also used an obscure provision of the Clean Water Act to give huge raises to two favored aides -- and he did this over Trump White House objections. 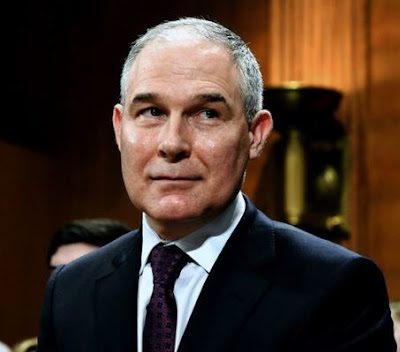 Furthermore, Pruit demoted or had reassigned four people who dared question is outrageous ethical breaches -- including a Trump political appointee named Kevin Chmielewski (who, the New York Times reports, strongly objected to a proposal to buy a $100,000-a-month charter aircraft membership that would have allowed Mr. Pruitt to take unlimited private jet trips for official business).
Then there was the matter of the $70,000 "bulletproof desk" that Pruitt supposedly needed. 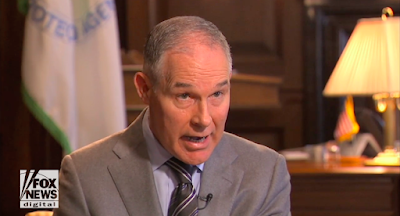 All of this has happened -- continues to happened -- while Pruitt destroys the very mission of the agency in order to make the world safe for the worst of the worst sort of fossil fuel polluters to include mass layoffs at EPA in order to hamstring the agency's mission; firing scientists; forbidding talk of "climate change" in EPA documents; and, in general, being a world-class piece of human shit.
That's Scott Pruitt.


He literally is a cartoon villain out of an action adventure movie. Naturally, this makes him a good fit in Trump World (even if Trump's hapless Chief of Staff wants Pruitt gone). 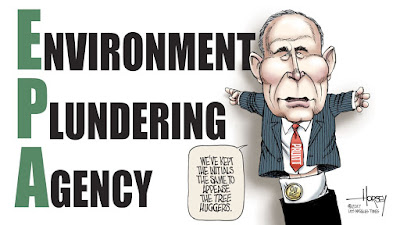 What's more, Trump has even been eyeing him as Attorney General as a backfill if and when he fires Jeff Sessions -- with the quid pro quo being that Pruitt would immediately shut down Robert Mueller's investigation into (as Charlie Pierce calls it) the Russia ratf*cking that gave us Donald J. Trump as president of this country.
This might explain Trump's gibberish the past day or two about what a "fantastic job" Pruitt is doing and how everybody in "coal and engery country" just "love Scott Pruitt." 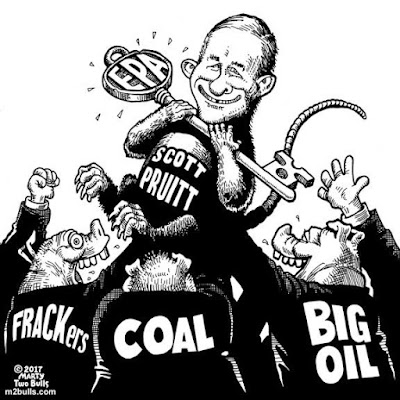 Anyway, here are some pieces (with links included):
Charlie Pierce: Scott Pruitt Is the Symptom. Modern Conservatism Is the Disease.
Opening two sentences: 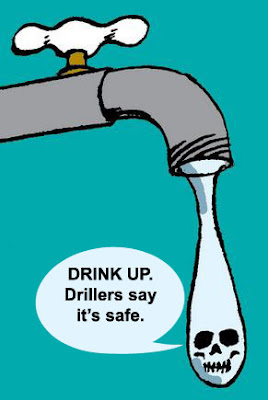 In retrospect, it probably wasn't the best idea to confirm someone to head the EPA who was at that very moment a plaintiff in a baker’s dozen lawsuits against that very agency. In less than two years, Scott Pruitt has managed to combine institutional vandalism and personal trough-diving in a virtually unprecedented fashion.


Just in the past few days, he has rolled back mileage standards instituted by the previous administration, a move that is almost certainly going to get him and the EPA sued by the state of California, whose standards were the model for the new federal ones.
Jay Willis: Scott Pruitt Vaults Into First Place in Ongoing Trump Cabinet Grifting Olympics 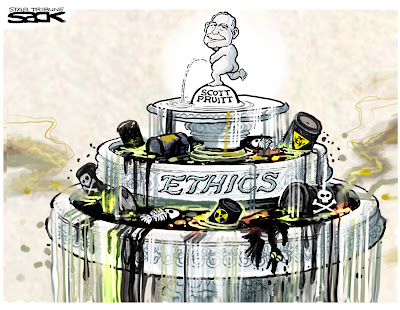 Elaina Plott and Robinson Meyer: Scott Pruitt Bypassed the White House to Give Big Raises to Favorite Aides
The sub-headline explains this scandal: The embattled EPA chief used an obscure provision last month to increase the salaries of a pair of staffers by tens of thousands of dollars. 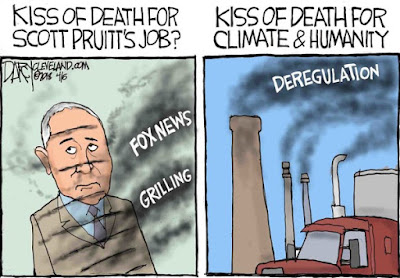 Jack Holmes: Fox News (Yes, Fox News) Just Exposed Scott Pruitt as the Ultimate Swamp Creature
Let me say that Fox News report Ed Henry should be praised here for turning what Pruitt thought would be an ass-kissing softball interview on the Fox News Channel into a real grilling.
Jay Michaelson: Too Crooked to Fail: Why Scott Pruitt Still Has His Job (for Now)
This is really the comprehensive piece on the Pruitt scandals and why Trump isn't likely to fire him. 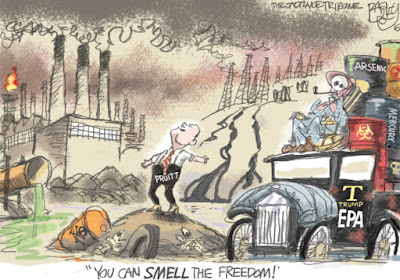 Charles Pierce: And we'll end again with Charlie Pierce: Scott Pruitt Is Reaching New Levels of Radioactivity
The Rob Porter connection is very interesting. And I love the line: "This is like studying the really dumb portion of the Borgia family."
OK, that's all for now. I intend to post another entry tomorrow.
UPDATED 8:48PM April 7, 2018


Here is a comprehensive AP article on Pruitt's expenditures including the $3 million and counting on security alone. Wow.
End of Update and of Entry.