WOOFF, WOOFF: Finally, a Republican Pol Does Something I Favor 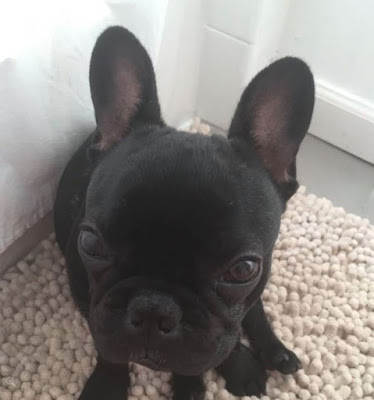 Kokito the French bulldog, who met a cruel and needless end on a United Airlines flight.
In case you hadn't heard of this horrible incident aboard a United Airline (link embedded):
United Airlines Apologizes After Dog Dies in Overhead Compartment
It occurred on this past Monday on United Flight 1284 Houston to New York LaGuardia). United bans the practice but this flight attendant had Catalina Robledo, a mother of two (including a baby) put her dog beloved "Kokito" -- who was in a carry on bag -- in the overhead bin, where is slowly suffocated to death.
Sen. John Kennedy (R - LA) has introduced and is co-sponsoring the Welfare of Our Furry Friends Act or WOOFF Act that would ban any airline from having live animals placed in the overhead bins. (In my view, it is shrieking, obnoxious two-year olds of American parents that belong in overhead bins.) The bill is being co-sponsored by Seen. Catherine Cortex Masto (D - NV) and it would establish civil fines if animals are put in overhead compartments.
I was unable to find the text of the bill, though.
Updated 1:22AM 3/16/2018


OK, I found this link to the text of the bill. It is literally one of the shortest bills I've ever seen, but it gets to the point.
End of Update. 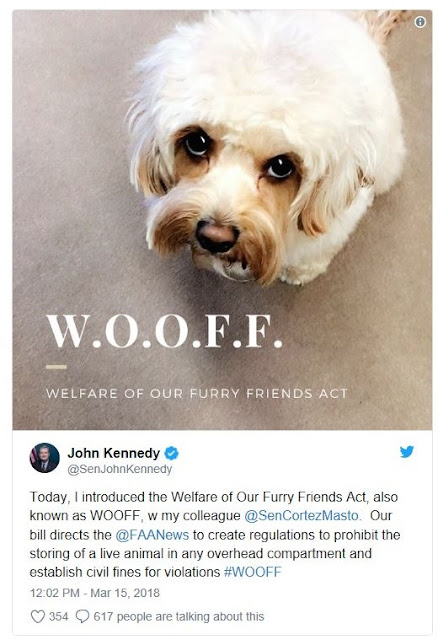 Here is a related article from Bloomberg: Outcry Over Dead Dog Intensifies Pressure on United CEO
Here is a related piece from Slate about what to do in such a situation -- since you can't really argue vociferously with flight crew including any vacuous, vicious gay male flight attendants -- because airline cabins are more like mobile authoritarian mini-states than anything else. 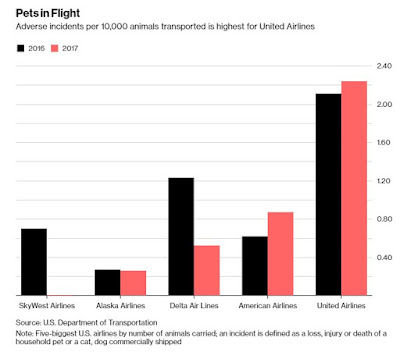 Number of pet adverse incidents in flight per 10,000 pets transported for the top five U.S. airlines for 2016 and 2017; Source: U.S. Department of Transportation.
This includes pet deaths and mix ups in destination. As you can see, United stands out in this category.
******


Oh, and fuck this flight attendant. This flight attendant should be stowed in the baggage compartment on a flight on a trans-Pacific flight from San Francisco to Sydney.
As for this Congress -- and the NRA-controlled GOP in general -- being unable and unwilling to do anything about sensible gun legislation, well, my view is that if you can walk and chew gum at the same time, Congress can do both things as well. And if the GOP passes this, Trump will sign it.
OK, that's all for now. Tonight is a gym night. I'll try to post a new entry later on.
--Regulus
Posted by Regulus at 6:54 PM