"Bye Bye Blues" by the husband-and-wife duo of Les Paul and Mary Ford (1952)
As the Keeper of All Knowledge explains:
"Bye Bye Blues" is a popular and jazz standard written by Fred Hamm, Dave Bennett, Bert Lown, and Chauncey Gray and published in 1925 ... It has been recorded by many artists, but the best-known recording is one made in 1952 by Les Paul and Mary Ford. 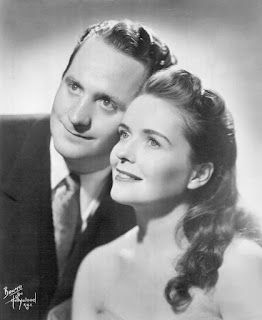 This recording was released by Capitol Records as catalog number 2316 backed with the Les Paul instrumental composition "Mammy's Boogie." It first reached the Billboard magazine Best Seller chart on December 27, 1952 and lasted 5 weeks on the chart, peaking at #5.


As for Les Paul and Mary Ford, the couple divorced in 1964 and Ms. Ford died in 1977 at age 53 due to complications from alcohol abuse (she entered a diabetic coma). Hers was not a happy life. 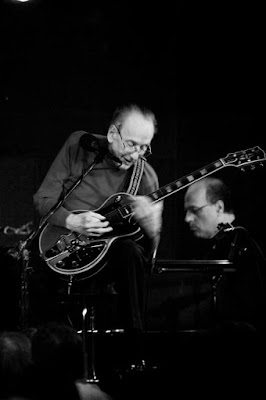 Les Paul, on the other hand, lived to 94 -- passing away in August 2009 -- and had an active and distinguished career, receiving numerous accolades and awards including reportedly being the only person to be inducted into both the Rock and Roll Hall of Fame and the National Inventors Hall of Fame.

Left: Les Paul at the Iridium Jazz Club in New York City in Oct. 2008 playing a solid body electric guitar that he helped design / invent and that bears his name: the Gibson Les Paul


The Les Paul Foundation he set up continues to support of music education, recording, innovation and medical research related to hearing.
Since I've spent so much time talking about them, it seems only proper to feature another song by them:
Here Les Paul and Mary Ford sing their popular 1951 version of the existing song "The World Is Waiting for the Sunrise." This is a live version from their TV show short called "The Les Paul & Mary Ford Show."
*******


Next up, a song I've always really loved -- music and lyrics:
"King of Pain" by The Police from the group's final and awesome studio album Synchronicity (1983) 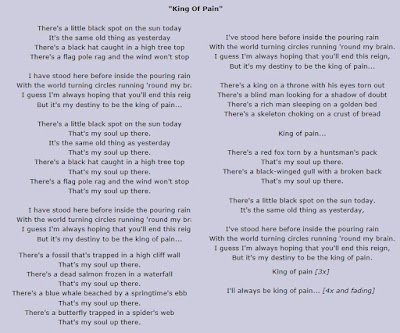 
And we will end with something Saturday night upbeat ...
"Birthday" by Katy Perry from her album Prism (2013)
This is not the main and rather elaborate video to this song -- featuring Perry in elaborate disguises as birthday party entertainers at five actual birthdays and unbeknownst to the people in attendance. Instead, this is the lyric video version featuring Perry and a series of cakes spelling out the words. I prefer this version. The main version is available here.
Both videos were released in 2014 -- a year after the song.
*******


OK, that's all for now. Instead of a Saturday evening post prior to midnight, my plan is to write a regular entry with a particular theme (or themes) later tonight.
--Regulus
Posted by Regulus at 11:34 PM

Bolton is a Machiavellian asshole, and I'm a republican. Sick, I know.

Bolton is an asshole, and I'm a republican! Sad, I know.

I have "comment moderation" turned on since the only comments I ever get are robots trying to sell Viagra or strange people in India or Bangladesh pretending to be named "Jenny" with links to God-knows-what.

Obviously, I'm not a Republican. As for Trump, I am of the view that he will start a war because that's the only way he could win reelection. That it would be catastrophic doesn't register with him since he is a sociopath.

In addition, Trump views existence as a zero-sum game of winners and losers, so a war makes sense.

Bolton will just be the instrument by which it is facilitated -- talking Trump into something he wants to do anyway.

Trump is a complete, egotistical, maniacal, unstable turd who couldn't flush himself down a toilet if the flush valve handle were handed to him on silver platter.

I know you are not a Republican, and that's ok by me. I hardly recognize the friggin' party these days. Unfortunately, the dems can't can't their act together and select someone who has enough common sense to be electable.

I just know that it's darkest before the dawn. The problem is it seems that dawn is hours away...

I don't know what specifically needs to happen but the GOP in its current form cannot continue as a ruling party for too much longer or it will destroy the country.

While the Dems are a flawed and conflicted political party with many factions and confusion -- not to mention subject to a certain political correctness group-think that's gotten out of hand, they are an actual political party capable of governing.

The GOP has turned into a cult run by a for-profit rightwing media / entertainment complex, funded with dark money, and defined by racial-ethnic panic, fear, and loathing.

I know this is familiar territory by now but it still needs to be said.

Well, anyway, at least we are done with all the snow drama for this season. We can put that to bed. It's starting to wear me out. And it would be nice if it were a bit warmer -- and a bit wetter.

There are times like now when I figure that the couple of decades of life that I have in front of me (deity willing) before dying of natural causes is probably more than sufficient. Any more than that is inviting trouble.

If someone asked me to choose between Trump and Hitler, I'm not sure I could. At least the latter didn't have 1000's of nukes at his disposal.

Yes, the weather countdown to September 1st has commenced. Only 160 days and counting...