The United States of High-Powered Firearms in the Time of Trump: The NRA's Brutal Death-Grip Chronicles and the Glimmer of a New Hope 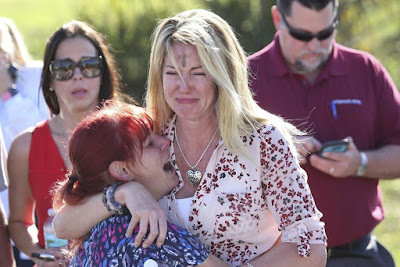 I've been reluctant to do any blog entry deep dive into the ongoing media-facilitated national passion play about the ocean of high-powered firearms and other instruments of mass slaughter that fill this country that is occurring as a result of the latest mass school slaughter of 17 students and facility this past February 14th, St. Valentine's Day, at Marjory Stoneman Douglas High School in Parkland, Florida. 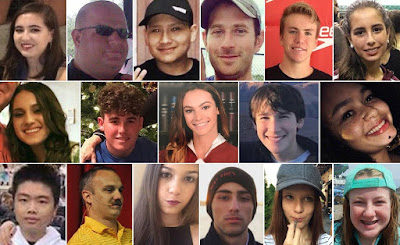 Montage of the 17 people killed in the mass shooting at Marjory Stoneman Douglas High School.
*******


But I suppose I should say a few things.
Yesterday's (Wednesday's) event at the White House -- billed as a "listening session on the part of Trump (now that WOULD have been a first) in which family members of those killed in the school killing and even survivors expressed their feelings and concerns -- was suitably Trumpian. 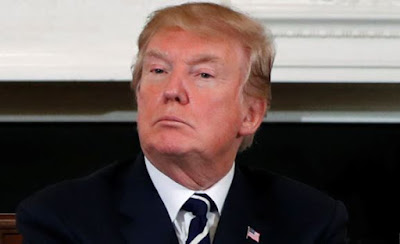 It featured a zombie-eyed Trump (see image directly above) sitting there in a daze, holding a sheaf of papers with handwritten notes representing his talking points. The notes were so large that the assembled media were able to focus their cameras on the words written on the page. 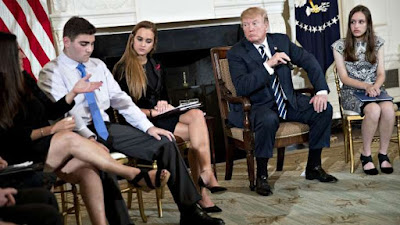 Trump meets with in the White House with survivors of the shooting at Marjory Stoneman Douglas High School, February 21, 2018.
*******


Andrew Pollack -- who whose daughter, Meadow, 18, was among the fatalities, and is, by the way, a Trump supporter -- was a compelling figure in his comments about why does this continue to happen in the U.S. over and over again, and how angry he is -- and that he can now only visit his daughter in the cemetery. 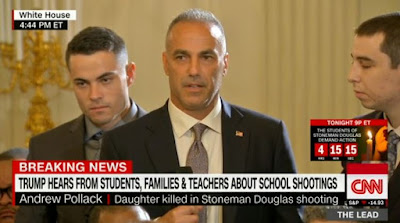 
However, I just don't understand his contention that the effort to "fix the schools" so that they are safe is wholly divorced from any connection to America's fire arms fetish, all 300 million of them. To go down this path is to accept the logic of the NRA's solution -- namely, arming everybody (see below) -- is a sickly perverted, and wholly unacceptable reality. 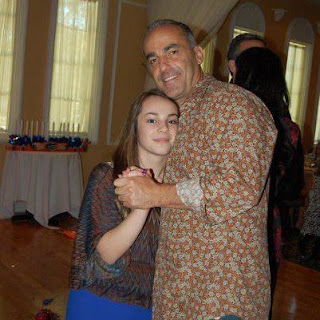 Andrew Pollack and his daughter Meadow.
*******


Of course, Trump being Trump, he also suggested that every teacher in the United States carry their own personal cache of AR-15s and other such devices in the classroom, such is Dear Leader's brilliance. Today, during his morning "Executive Time," Trump denied he ever specifically said such a thing -- except he went on to advocate exactly that (more on that below).

As an interjection here ...
Yes, yes, we know that "AR" means "Armalite Rifle" (or ArmaLite Rifle) and not "automatic rifle" or "assault rifle" -- this is, apparently, a VERY big thing with firearms fanatics when it comes to the effete bicoastal transgendered socialists and brie-eating snobs who would take away their weaponry since it somehow "proves" there's no such things as "assault rifles" or even "assault weaponry."
This is the level of American gun culture discourse. 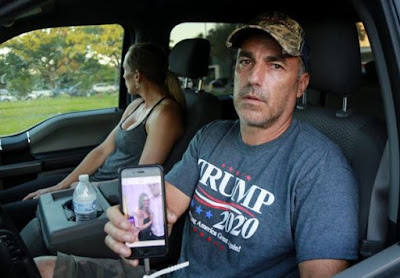 Andrew Pollack holding a smartphone with a picture of his daughter on February 14, 2018 -- shortly before he found out that his daughter had, in fact, been killed.
No, no comment on the t-shirt.
*******


Today (Thursday), Trump "developed" this notion in a series of Executive Time tweets about "hardening" schools that included the idea that teachers get "bonuses" for carrying their own weapons arsenal. To be clear, Trump, lacking the mental capability of any sort of policy thought, didn't "develop" this thought but rather was just parroting what the NRA leadership -- probably LaPierre himself -- said to him. 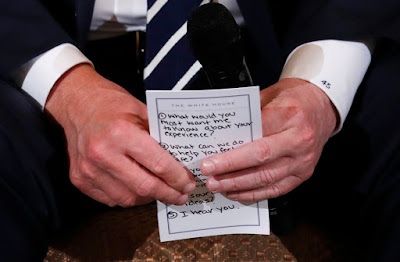 
Also Trump being Trump, this past weekend, he tweet-stormed that the FBI dropped the ball on stopping the killer -- 17-year old Nikolas Cruz -- because it was spending "too much time trying to prove Russian collusion," resulting in it having "missed all of the many signals" ahead of time. 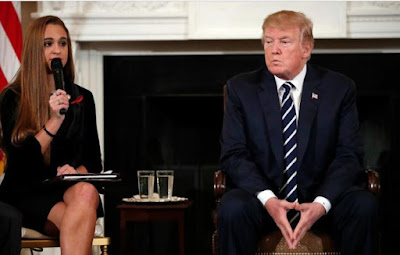 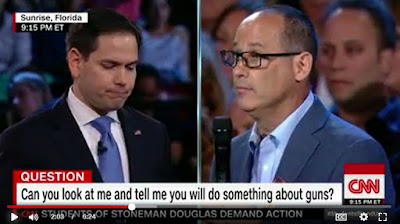 
Of note, Sen. Marco Rubio -- the good and the great GOP Hispanic Hope from the State of Florida -- was there, as was his Democratic counterpart Sen. Bill Nelson. Let me just say that while most Republican pols are amoral smash-and-grab crazies living in their own epistemologically-sealed rightwing infotainment bubble (Fox News, Breitbart, hate radio, Russian twitter bot-fed lies, etc.), Marco Rubio is a special brand of pathetic pussy. I mention this because Rubio's pussiness, fecklessness, and all around rightwing vapidity was on display in his exchange with Fred Guttenberg, whose daughter Jaimie, 14, was among those killed. He effectively told Rubio what a worthless political leader and empty sack he is. Of course, Rubio is too stupid and compromised for any of that to process. 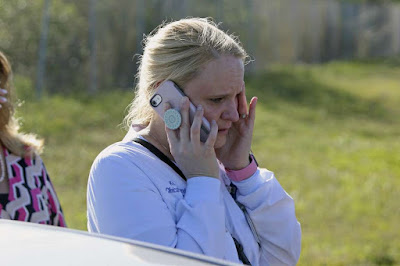 For its part, the NRA -- whose usual strategy is keep ducked and covered until the "initial shock" of the most recent mass shooting "wears off" and then goes back about its business of being half international arms merchant and half terrorist cult with GOP pols as its puppets -- is clearly feeling some pressure in the current national psychodrama since the trauma and desire to "do something" by way of controlling these weapons of mass death is cutting quite broadly across the U.S. 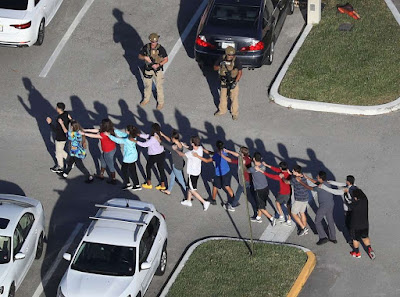 In what is being described as a "lashing out," NRA CEO and quasi-human reptile Wayne LaPierre made hissing noises at the annual Nazi-Con event of CPAC taking place this week in D.C. (or rather, at National Harbor in Maryland). 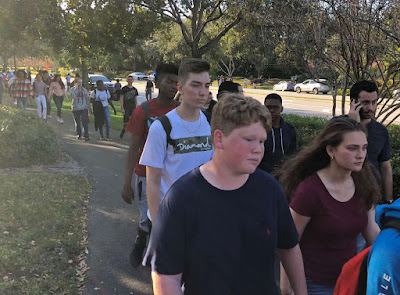 This being our American paranoid idiocracy where Andrew Jackson is still the spiritual leader, the big rightwing talking point / conspiracy-theory is that the entire Florida massacre was somehow staged, or at least that the students now talking to the media are "crisis actors" who parachute into various situations in an attempt to get Democrats elected and steal guns from two key GOP base constituencies: angry townhouse-dwelling, exurban whites and their Third World-like impoverished, rural counterparts. 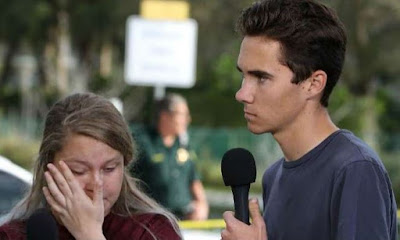 David Hogg and his mother, Rebecca Boldrick, in a media interview, February 2018.
Hogg is a survivor of the mass shooting -- and is now a target of the  rightwing smear and hate perpetual motion machine.
*******


It is being facilitated by Breitbart media agitators and, once again, Russian trolls. This is how you end up with uniquely American conspiracy theories ("liked" on social media by Trump's sociopathic son Donald Trump Jr.) and resulting death threats against high school students such as David Hogg who just survived a massacre barely a week ago and who has emerged as a compelling advocate for controlling these weapons of mass slaughter. 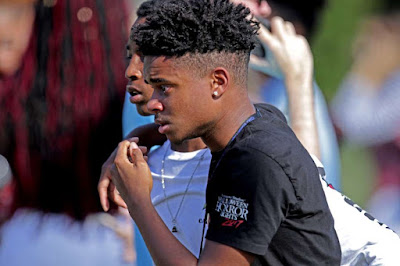 The fundamental moral obscenity of this aside, always keep this in mind: Always remember: Whatever the Right -- taken in its collective hydra sense -- is accusing others of doing, that is precisely the thing it itself is doing. 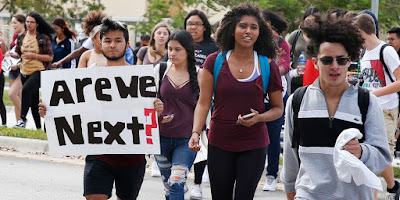 But I think it must be pointed out that the spontaneous eruption of activism and protest by high school students not just from Marjory Stoneman Douglas High School this past weekend at the Tallahassee state capitol building, but all around the United States in the wake of the killing deeply confused and scared the Right. This ties into what I wrote above about how broad is the desire (at least for now) to do something about these weapons of mass killing.
The result is an even more fevered-paranoid reaction than usual on the right -- and in the present era of social media, it is being facilitated, of course, by Putin's armies of Russian bot trolls on social media. 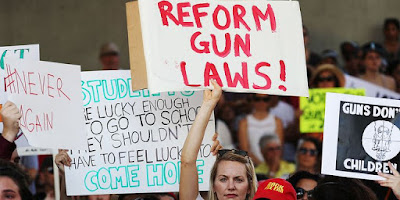 Charlie Pierce wrote this nice piece about the high school activism that is worth a read.
Speaking of Charlie Pierce, he also wrote this piece on the CNN town hall event: Some Thoughts on Marco Rubio, Dana Loesch, and the Parents of Murdered Students.
I love the reference to Florida Gov. Rick Scott -- who did not show up at the event -- as "Governor Bat Boy." (That's a reference to one of the most famous covers of the now-defunct Weekly World News tabloid with its always-fictitious supernatural-themed lead story.) But Pierce is at his best deconstructing the NRA-Spokes-Demon Dana Loesch. 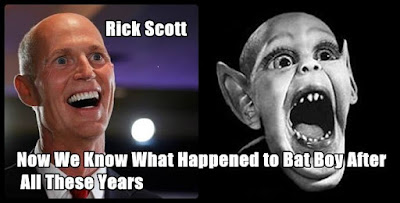 After noting Loesch's bizarre retort to a question about how when the Second Amendment was drafted, there were only muskets -- not high-powered weapons of mass slaughter, namely:
"At the time, there were fully-automatic firearms that were available, the Belton gun and the Puckle gun."
What kind of an omadhaun throws out historical trivia -- and inaccurate historical trivia at that -- to win a minor debating point over a teacher who a week ago saw her students slaughtered in front of her? 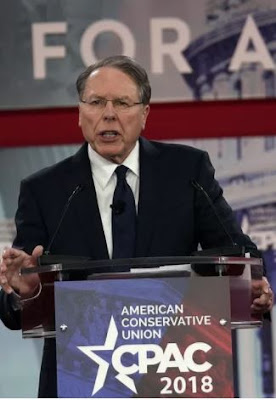 Returning to LaPierre (pictured left earlier today at CPAC), given his role vis-à-vis the Republican Party as ideological shock-troop leader who stokes the hoards of angry white shut-ins that are a key part of the GOP base, it was no surprise he was there (he usually is).

But it also meant that Loesch got to introduce her boss, which she did this way: 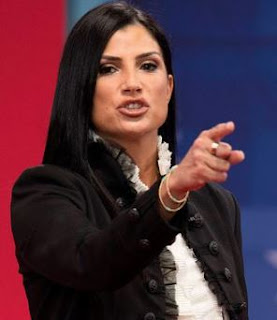 
As for the vomit that came out of the mouth of LaPierre -- Donald Trump's good friend -- the Guardian reported it thusly:
"This growing socialist state dreams of manipulating schoolchildren to squeeze them for information about their parents ... Do mommy and daddy own a gun? 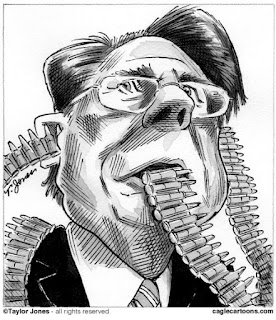 And all of this private information will be entered on to that ultimate list, that cloud of data storage ... and then it's just a short hop to the systematic destruction of our basic freedoms in this country ... If these so-called European socialists take over the House and the Senate and god forbid they win the White House again our American freedoms will be lost forever, and the first to go will be the second amendment to the US constitution."


Let's hope so. It is an abomination of an amendment to the Constitution in its present form. The sooner this grotesquery of a reality that fetishes limitless weapons of mass death is ended, the better. Actually, in an ideal world, the first thing to go would be Wayne LaPierre himself. 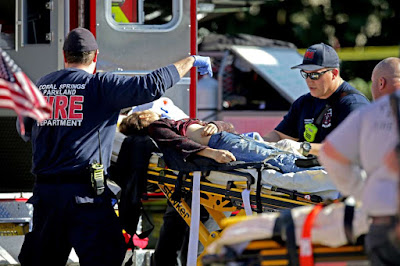 A victim of the mass shooting at Marjory Stoneman Douglas High School is taken away in an ambulance.
********