Jukebox Saturday Night for February 24th, 2018: Taking a Chance, Thinking of You, Rock DJ, and Break My Stride Edition

OK, let's start out with a nice old piece by a very talented singer and actress ...
"Taking a Chance On Love" by Ethel Waters as performed in the movie "Cabin the Sky" (1943)
The song was written by Vernon Duke with lyrics by John La Touche and Ted Fetter. It was published in 1940 and was first featured in the Broadway musical Cabin the Sky with its first-ever all-black cast. This YouTube clip actually is from the 1943 movie version of Cabin in the Sky. About the movie, the Keeper of All Knowledge explains it thusly: 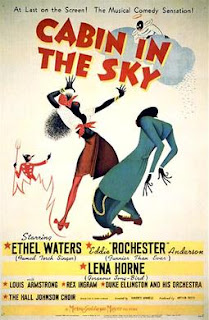 "Cabin in the Sky" is a 1943 American musical film based on the 1940 stage musical of the same name. Directed by Vincente Minnelli, the film stars Ethel Waters and Rex Ingram, who reprised their roles from the Broadway production, as well Eddie 'Rochester' Anderson and Lena Horne. It was Horne's first and only leading role in an MGM musical.


Louis Armstrong was also featured in the film as one of Lucifer Junior's minions, and Duke Ellington and his Orchestra have a showcase musical number in the film. 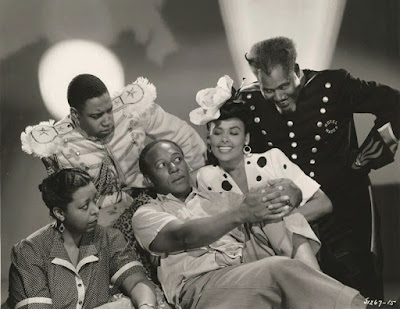 Cast of "Cabin in the Sky" movie from left to right: Ethel Waters, Kenneth Spencer, Eddie "Rochester" Anderson, Lena Horne, and Rex Ingram.
This TCM site has some interesting info about the intrigue before and during production -- including Waters on why she originally rejected the role of Petunia Jackson in the movie version.
Also, just FYI, I got the idea to feature this song from Bryan Wright's most recent Shellac Stack show -- Show No. 111 -- as he featured a better-quality studio version of it. Of note, Bryan's show #111 is an especially good one, and I recommend listening to it.
*******


Next up, something nice from Janet Jackson ...
"When I Think of You" by Janet Jackson from her album Control (1986)
Ms. Jackson is an incredibly talented singer and performer who has given the world so much wonderful music. 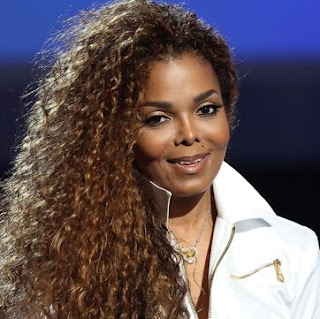 I still feel badly for her about the Super Bowl "wardrobe malfunction" nonsense in Feb. 2004 that so damaged her career -- especially since Justin Timberlake just threw her under the bus while suffering no adverse career effects (even starring in the 2018 Super Bowl halftime show).

Recall that the GOP media/entertainment agitprop machine as it existed then swung wildly into action to make political hay out of it for Bush and their side in general. 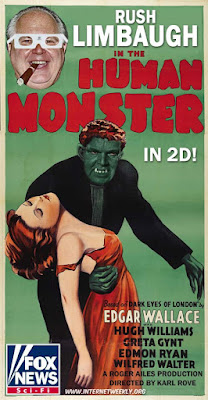 Naturally, the shitty and useless mainstream media played along to create a manufactured hysteria not seen since the most recent Red Scare. Of particular offense to me was Rush the Vulgar Lying Pigboy Limbaugh's reaction. Limbaugh -- then at his Peak Pig of influence -- pretended to be morally horrified -- going on endlessly on his radio show about how his drug-addled, thrice-married, closet bisexual sensibilities were so deeply shocked, and trying to tie it into cheap political propaganda grist.


Next up, something really Saturday night upbeat ...
"Rock DJ" by Robbie Williams from his Sing When You're Winning album (2000)
I've wanted to feature this song for a while as I love the music and the lyrics. The trouble is, I just don't like the official video, which you can watch here. It features Williams up on a dance floor platform surrounded by beautiful female models first taking off his clothes and then pealing off his skin and throwing his organs. I find it quite gross, and don't want to feature it here. But the song is just primo in every other way.
*******


Now since I didn't feature a Jukebox Saturday Night entry last week, I'd like to have an extra song ...
"Break My Stride" by Matthew Wilder (performing live) from his I Don't Speak the Language album (1983)
I've featured this one before in this Jukebox Saturday Night entry but I just like the song so much. As for Wilder, he sort of looks like my dad did at times back in the early 1980s with the very curly hair and mustache.
OK, that's all for now. My plan is to post an update later tonight rather than trying to get it posted prior to midnight.
--Regulus
Posted by Regulus at 11:33 PM