Jukebox Saturday Night for February 3rd, 2018: The Benny, Brenda, and Battlestar Galactica Edition -OR- "Sing, Sing, Sing (with a Swing)"

Let's start out with one of the great Big Band standards -- and a hyper-energetic and upbeat one at that:
"Sing, Sing, Sing (With a Swing)" by Benny Goodman and his Orchestra (1937)
This song -- both music and lyrics -- was written by Louis Prima in 1936, but the Benny Goodman Orchestra's thumping instrumental version is probably the best known. And as The Keeper of All Knowledge explains, the 8:43 length of Goodman's 1937 version was unprecedented for length -- taking up both sides of a 12-inch 78 -- and there even have been live versions with improvisations lasting 12-1/2 minutes. The YouTube version above is 5:23. 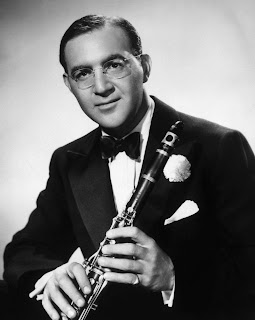 I found another YouTube version in which Goodman himself explained that the band's original version featured Helen Ward on vocals, but the group felt the arrangement wasn't working well so they came up through repeated performances with this jammin' version.


And I'll end on a slightly different note than usual ...
"Battlestar Galactica (1978 Television Series) Original Theme" as performed by the Boston Pops Orchestra (date uncertain)
This theme was composed and conducted by Stu Phillips with the pilot score performed by the Los Angeles Philharmonic Orchestra (which is stated in the show's opening credits).
OK, that's all for now. Please see my previous entry for a brief update.
--Regulus
Posted by Regulus at 11:58 PM