Galactic Star: Remembering Actor Richard Hatch on the One-Year Anniversary of His Passing 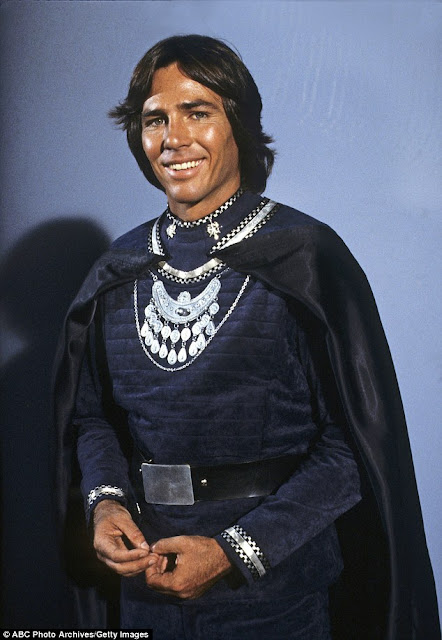 
I didn't note this a year ago when he died because I had not yet rediscovered Battlestar Galactica thanks to its weekly midnight Sunday showings on MeTV (during the Super Sci-Fi Saturday Night and Sunday Red-Eye Sci-Fi line up).
It was one year ago today -- February 7, 2017 -- that actor Richard Hatch of Battlestar Galactica fame passed away at age 71 from pancreatic cancer. 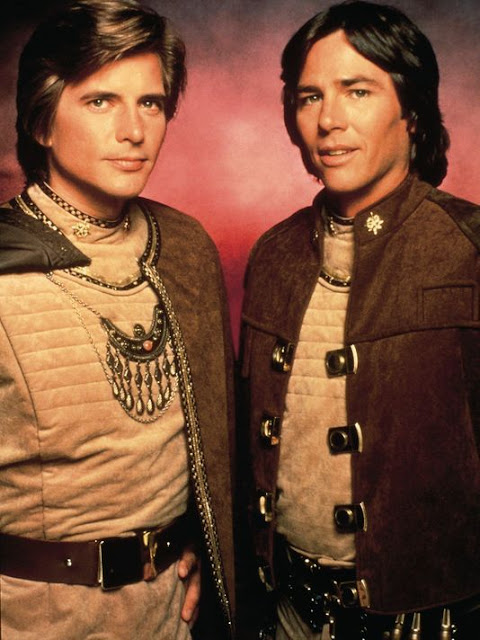 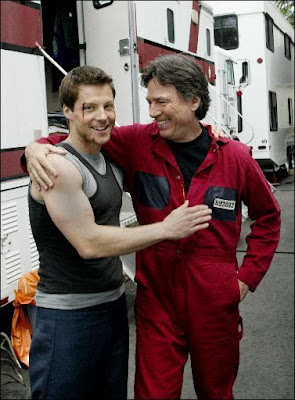 While he had multiple TV series appearances and movie roles, Richard Hatch will be forever remembered for his role as Captain Apollo -- alongside actor Dirk Benedict as Captain Starbuck -- in the original 1978 series Battlestar Galactica. Hatch also played Tom Zarek in the reimagined Battlestar Galactica ran from 2004 to 2009 on Syfy.


Above: Richard Hatch and Jamie Bamber, who played Lee "Apollo" Adama in the new series (which was Hatch's role in the original series). For his part, Hatch played Tom Zarek in the new series.
*******


About that series, here is a nice interview with Richard Hatch from 2009 that the Los Angeles Times carried again on the occasion of his death last year in which he puts the reimagined series in a broader context and also explains how well the new series turned out. 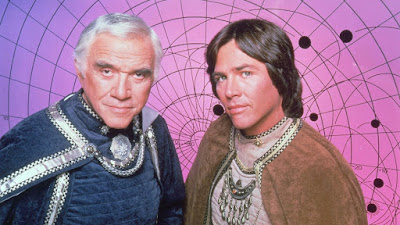 
I would like to repost in full the New York Times obituary that appeared a year ago including in the print edition on Feb. 10, 2017. It is interspersed with pictures of Richard Hatch.
Richard Hatch, Who Starred in 'Battlestar Galactica,' Dies at 71
Source here.


Richard Hatch, a veteran actor who played a hotshot pilot in the 1970s science-fiction television series “Battlestar Galactica” and a political leader in a reboot of the series more than two decades later, died on Tuesday in Los Angeles. He was 71.
His son, Paul, said the cause was pancreatic cancer. 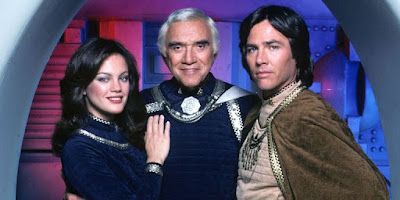 
Mr. Hatch played the fighter pilot Captain Apollo in the first "Battlestar Galactica" series, seen on ABC in the 1978-79 season. The character was regularly featured alongside his best friend, Lieutenant Starbuck, played by Dirk Benedict, as they and other humans fought for survival against warrior robots called Cylons. The series also starred Lorne Greene. 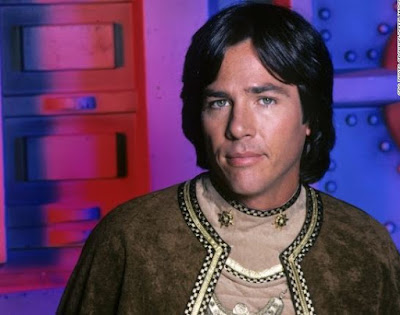 Mr. Hatch's performance brought him a Golden Globe nomination in 1979 for best actor in a television drama series. In the reprise of the series, which was broadcast on the SyFy network for five seasons starting in 2004, he played the charismatic political leader Tom Zarek. 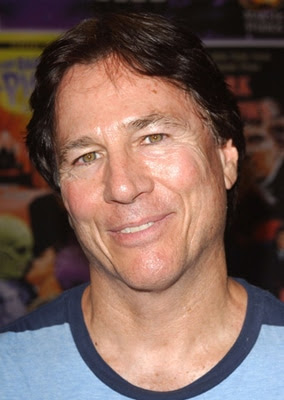 Mr. Hatch appeared in several other television series in the 1970s, including "The Waltons," "Cannon" and "The Streets of San Francisco," in which he played Inspector Dan Robbins in the fifth and final season, 1976-77, after Michael Douglas left the series.

He continued to make guest appearances on various shows over the next three decades.


He was frequently seen on "Dynasty," "The Love Boat" and "Hotel." 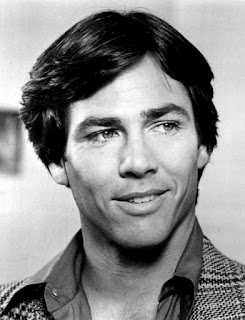 Richard Lawrence Hatch was born on May 21, 1945, in Santa Monica, Calif. After attending Harbor College in San Pedro, Calif., he joined a Los Angeles repertory company that traveled to New York City in 1967.

Left: Richard Hatch in a photo for the series "The Streets of San Francisco" in 1977.


He pursued an acting career there, beginning in Off Broadway theater, before landing a role on the daytime drama "All My Children" in 1971.
In addition to his son, he is survived by a brother, John. 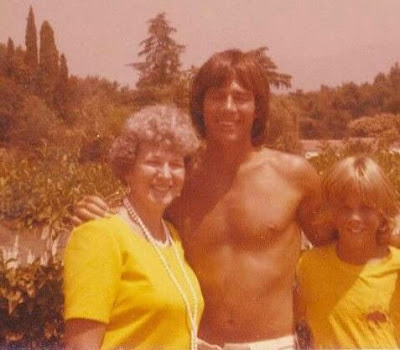 An old photo -- from the 1970s -- of Richard Hatch, his mother, and his then-young son.
As a young man Mr. Hatch originally had dreams of competing in the Olympics as a pole-vaulter. "I never thought of being an actor," he said on his website. "I was far too shy, too insecure." 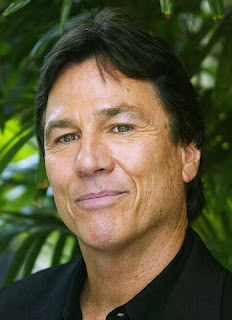 In an unlikely twist, it was the assassination of President John F. Kennedy in 1963 that helped Mr. Hatch find his way into acting. Going "nowhere" in college, he said, he had enrolled in an oral interpretation class when a required English course was booked. "It turned out to be my worst nightmare because I had to get up in front of people and read," he said.


Then, halfway through the course, came the assassination, and it profoundly affected him, he said. He found an article about the president and took it to class for an assignment. Standing in front of his classmates, he suddenly found his voice. 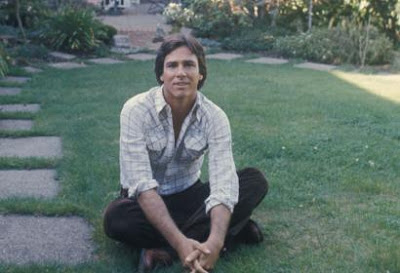 "It was a major turning point in my life," he said. "As I began to read this article, I got so affected by what I was saying that I forgot myself. I was expressing feelings and emotions I tended to keep locked inside of myself."
******* 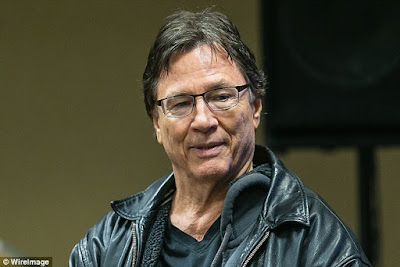 A picture of Richard Hatch at Dragon Con in Atlanta in Sept. 2016.
Upon his passing, there were some nice sentiments expressed by those who know him including Ronald D. Moore, the American screenwriter and television producer who created the reimagined Battlestar Galactica, and actor Edward James Olmos, who co-starred in the rebooted series: 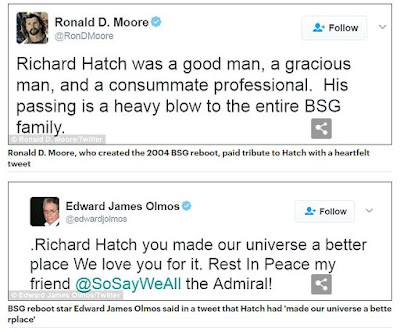 Hatch is survived by his son, actor Paul Hatch.
This Pinterest site has some pictures of Hatch, his family, and his doings over the years.
Lastly, I should note that my inclusion of the opening orchestral score to the 1978 Battlestar Galactica TV series in my most recent Jukebox Saturday Night entry was not timed for this one-year-anniversary of Hatch's passing.
OK, that's all for now. I'll try to post another entry tomorrow.
--Regulus
Posted by Regulus at 3:00 AM