Well, I Do Declare, Charleston Got Itself a Little Ol' Snowstorm; Major Coastal "Bombogenesis" Underway, Polar Vortex Locked and Loaded 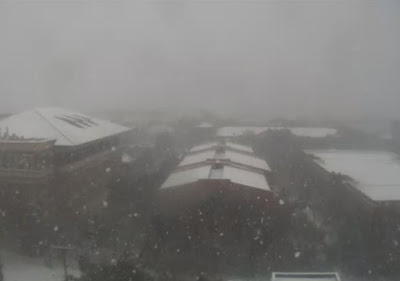 
Just a brief update to note that Charleston, S.C., has gotten a bona fide snowstorm this afternoon as the much-anticipated coastal "bomb" of a storm developing off the Southeast coast and moving up toward New England gets cranking. 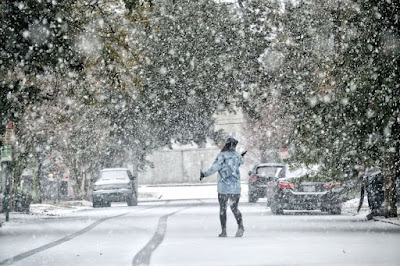 A lady walks happily along a residential street in the heavy snowfall in Charleston, S.C., January 3, 2018.
(This is the same image as in the Post and Courier screenshot below.)
*******


And, yes, this storm should meet the NWS definition of a bomb, namely, at least 24 millibars of pressure deepening within a 24-hour period. In fact, it could be more like 45-mb / 24-hours. 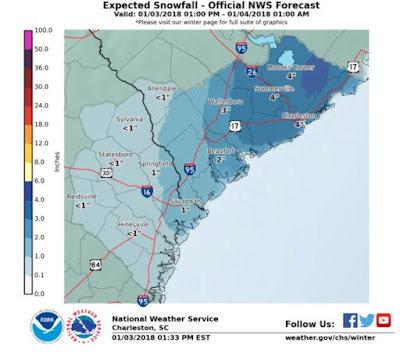 
I will note that the term "bomb" is being bandied about in the popular media -- and, much like the term "polar vortex" 4 years ago, it is causing borderline political hysteria, in particular, among the fundie and Fox News faithful. 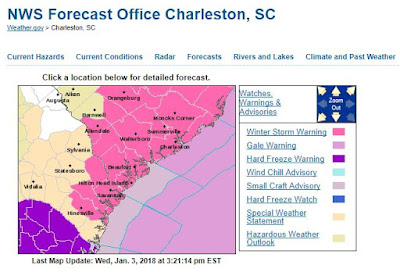 
This weather event has the distinction of "bomb" (bombogenesis) and polar vortex, so it's a twofer. 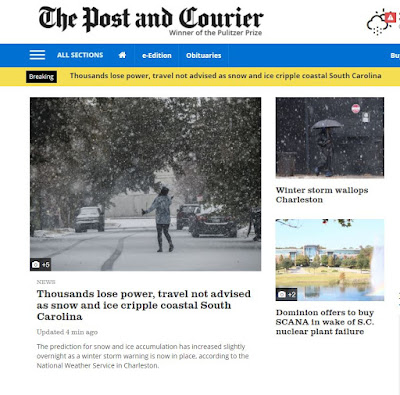 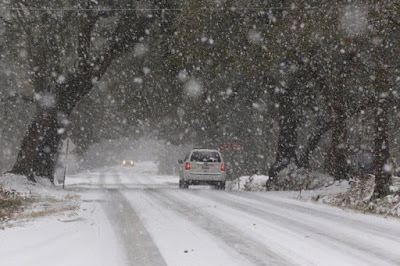 Heavy snowfall along tree-lined Ashley River Road in West Ashley, S.C., January 3, 2018.
West Ashley is one of the districts that comprise Charleston, S.C.


According to this article in the Post and Courier -- from nearly 1 year ago to the day -- the biggest snowfall ever officially in Charleston was 8.0 inches in the Dec 22 - 24, 1989 snowstorm (as measured, I believe, at KCHS). The second biggest one was 7.1 inches on Feb. 9 - 10, 1973. A comprehensive write up of the 1989 snowstorm is here from the Wilmington NWS website.
I don't think today's snowfall will reach either of those amounts -- but 3 to 5 inches is certainly possible.
(I recall this 1989 event -- zilch fell in the Baltimore/Washington area owing to a massive Arctic high that suppressed the storm.) 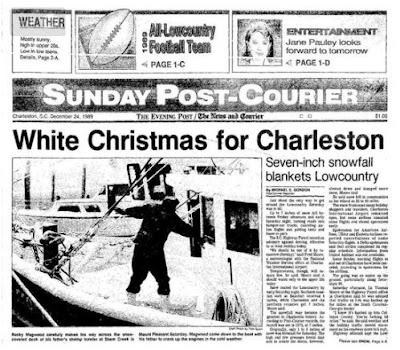 
As for the impending storm itself, here is an infographic put out by the NWS Weather Prediction Center: 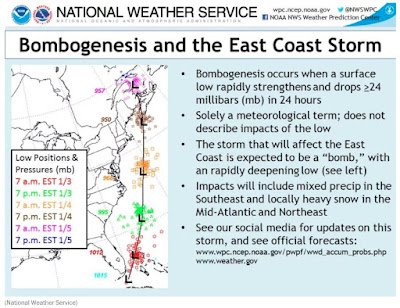 While impressive, this is not at all conducive to a major Washington, D.C., area snowfall. For a major mid-Atlantic snowfall that reaches inland, the highly elongated SE-NE path is not conducive. Rather, you would want the to take on a negative tilt at some point rather than just chugging into Nova Scotia. The polar jet that is pushing underneath the storm will kick it to the northeast while the Arctic high back over the Northern Great Plains will be ushered in by an Arctic frontal boundary.
Note: I updated at 11:36PM the above-paragraph to take into account some better information I found.
*******


The Philadelphia / Mount Holly NWS office has put the Jersey shore counties -- including my native Monmouth County -- under a blizzard warning. Ditto the Delaware and Maryland shoreline to include Rehoboth Beach and Ocean City. 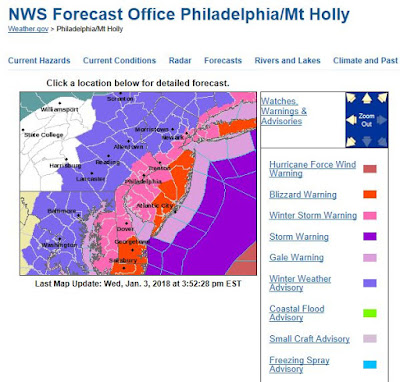 Philadelphia / Mount Holly (PHI) NWS CWA map updated 3:52PM EST January 3, 2017.
For this area, the Baltimore / Washington NWS office has issued a winter weather advisory for 1 to 3 inches of snow as most of the models show some accumulating snow reaching at least to the I-95 corridor and maybe a bit farther west (but not much).
I'll have more to say on that later.
--Regulus
Posted by Regulus at 4:54 PM