Do California Androids Dream of Wet Electric Sheep? -OR- "Like Tears in Rain" (Our Trumpian But Not Quite Blade Runner Dystopia)

A rainy morning in California, especially in the Bay area and inland into portions of the Central Valley, as seen in the NWS composite radar mosaic of the Pacific Southwest quadrant of the country, looped 1738 - 1848UTC (9:38AM - 10:48AM PST) January 8, 2018.
This entry ended up being a brief weather posting with a focus on the current West Coast weather -- in particular, the heavy rainfall in parts of California. The images in this entry are related to that. To be clear, this was not my originally-intended entry.)
*******


Well, it's too late for me to post a full entry -- either as a general update or a topical one. That being the case, I'll just note that I am getting ready to go to bed shortly.
I went to the gym after work and jogged for an hour on the treadmill -- stopping occasionally -- and then weightlifting and going for a swim. I got home tonight and made dinner and watched the usual MeTV line up of shows. The Twilight Zone episode was really powerful ("Deaths-Head Revisited"). This isn't the entry to delve into it, though.


The weather has warmed up after the just-concluded Arctic cold snap. Right now, here in D.C., it's about 37F and mostly cloudy with lingering dampness (the dew point is just about equal to the air temp). This followed some light rain and, earlier in the day, sleet and freezing rain that produced the usual overreaction including early school dismissals and disgusting amounts of rock salt.
It was a tad slippery in places when I got off the Metro and walked home via the Safeway on 17th Street NW, in particular in those places where regular sidewalk and/or pavement was interrupted by bricks. 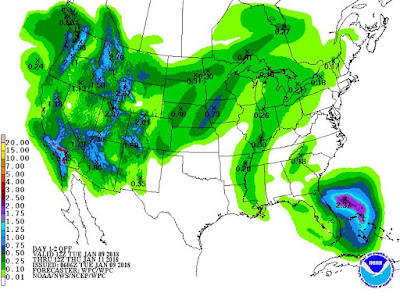 
Total precipitation at KDCA was 0.06" -- an amount that was exactly what the QPF was from this morning. KBWI also recorded 0.06" and 0.05" fell at KIAD. While we certainly could use more rainfall, the good news is the worst of the toxic rock salt was washed away (of course, the bad news is that it is washed into the Potomac and the practically biologically dead Chesapeake Bay). (And spare me the idiotic shit about how the bay is "already salty" so it doesn't matter.) 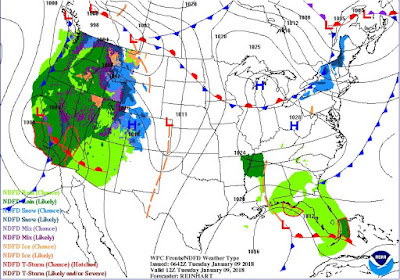 
The rest of the week should be significantly milder (well, warmer) than the just-concluded Arctic outbreak. Temps should be around 60F by Friday, but the pattern should turn wetter with chances of rainfall Thursday - Saturday before another reinforcing shot of colder air (but not nearly as cold as this past week).


Of note, large parts of California -- so recently the site of some of the worst wild fires ever -- has been getting moderate-to-heavy rainfall (and mountain snows) today. The obs for KSFO show that 2.62 inches of rain has fallen through 10PM today (June 8th).
For its part, KLAX has picked up 0.14 inches and downtown Los Angles (KCQT) 0.32 inches. 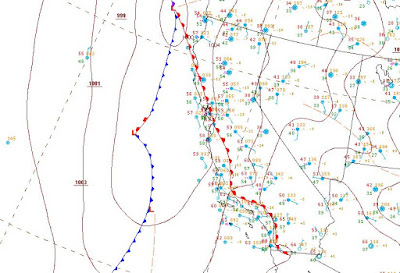 
As the image directly above shows, there is a complex frontal system located off California in the eastern Pacific with an elongated cold front and ahead of it, an equally elongated warm front that stretches literally along the entire California coastline.
Moisture is just fluxing northward in a conveyor belt pattern into California from due south -- and has been doing so all day. 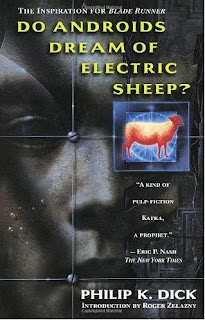 Of course, we're still a long way from a Blade Runner (1982 movie) California climate -- but if it indeed arrives on schedule, then that occurs in November 2019, so we still have time for things to get better ... or worse. Trump may or may not be in office at that point, but even if he is, the fervent hope is that the current malevolent insanity should have been checked by the midterms or other events.
And it really is a malevolent insanity -- and not just Trump, but one of our two great political parties. The country can't run in this manner for a prolonged period.
******* 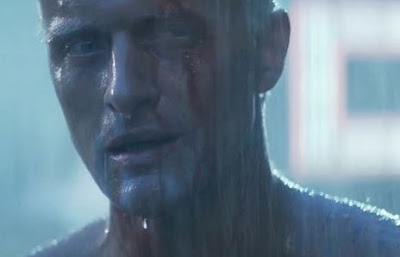 "Like tears in rain ..."
OK, that's all for now. While I may try to update the blog tomorrow early evening, it might not be until late Wednesday (early Thursday).
--Regulus