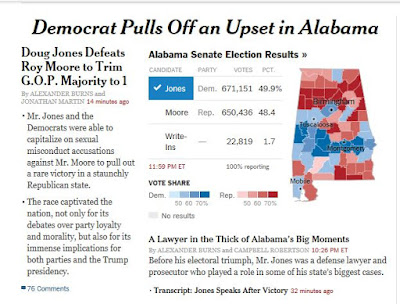 
Wow. Doug Jones pulled off a narrow but decisive victory in the special Senate race in Alabama night -- winning with a whisker under half of the vote at 49.9% to Roy Moore's 48.4%.

I really didn't expect this. Awesome.
Jonathan Chait has already posted a few thoughts on this -- and I'm going to repost it since he says it better than I could:.
Alabama Voters to Roy Moore: F*ck You and the Horse You Rode In On.
Roy Moore is Donald Trump, but moreso. He is a buffoon, a racist authoritarian demagogue, a sexual predator. In all these qualities, save buffoonery, he exceeds Trump. His defeat in one of America’s reddest states signals deep trouble for the party that has given rise to both men. 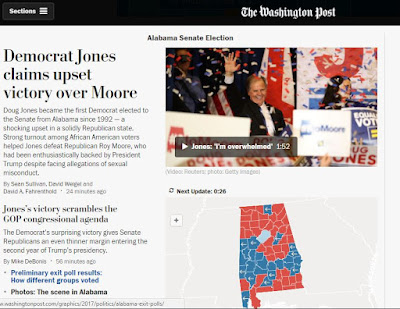 Washington Post online headline 11:32PM Dec. 12, 2017
Moore was indeed burdened with a unique political liability -- a longstanding taste for underage girls -- without which he would have been elected to the Senate. But Moore’s sexual history did not hurt him too much, because -- as Moore and Donald trump have demonstrated -- no personal failing can hurt a Republican nominee too much. The conservative media infrastructure creates an alternative information universe, in which any failing can be denied or whatabout-ed away. A large chunk of the party base stuck with Moore and believed him.
But the Republican base is not enough. Despite the qualms of many Republicans, Trump endorsed Moore wholeheartedly, and official opposition of the party apparatus mostly melted away. 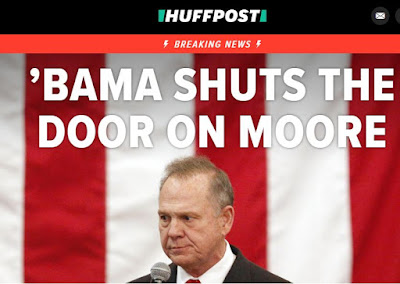 There's a reason even Republicans who loathe or fear Moore wanted him to win. The loss of his Senate seat creates a vital hinge for a potential Democratic takeover of the chamber in the midterm elections. If Moore had prevailed, Democrats would have needed three seats. The first two are relatively easy: they simply need to knock off deeply unpopular Nevada Senator Dean Heller, who has voted for the despised plans to repeal Obamacare and cut taxes for corporations, and replace retiring Sen. Jeff Flake in Arizona. They lead polls in both states. Doug Jones would give them a majority. Without Jones, they’d have needed to win in deep red states like Texas or Tennessee. 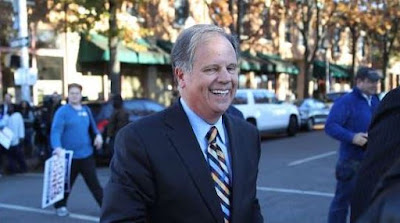 Of course, after the special elections in Virginia and Alabama, such outcomes now seem more likely as well. Almost every sign points to a Democratic wave election. Presidents almost always face midterm course corrections, but Trump’s dismal political standing, in the rapid time frame it has occurred, lacks any parallel. He lost the trust of the country before he even took office, and has continued to sink.
Exit polls in Alabama -- a blunt instrument, to be sure -- show Trump's approval rating barely at parity. Most ominously of all for the GOP, Jones won voters under the age of 30 by 22 points. Even in Alabama, the future of America looks very different. It looks like a country that will recall the presidency of Donald Trump in history as a tragedy or a joke.
I'm eagerly waiting to hear what Charlie Pierce has to say. His piece earlier today was one of utter despair at the prospect of a Moore win based upon the behavior and beliefs of his supporters (link embedded): What I Saw Inside Roy Moore's Barn Burner. 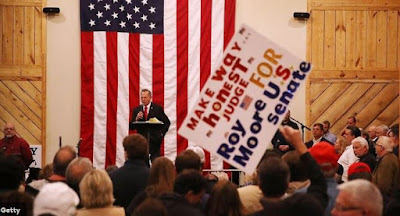 He ended that piece this way:


Finally, you give up. Roy Moore is a vehicle for collecting suckers, for liberating them from their responsibility as citizens in a self-governing republic, and anybody who thinks this waterheaded theocrat belongs in the United States Senate is a dupe and a fool. Finally, you don't care if the people behind Roy Moore, and the people in the crowd in front of him, believe you are a member of the coastal elite or an agent of Lucifer. Finally, you grow weary of the smug condescension of religious bigots. Finally, you decide to put down the twin burdens of excusing deliberate ignorance and respecting the opinions of people who want to light the world on fire to kill their imaginary enemies. And you give up and tell the truth.
These people deserve what they get. 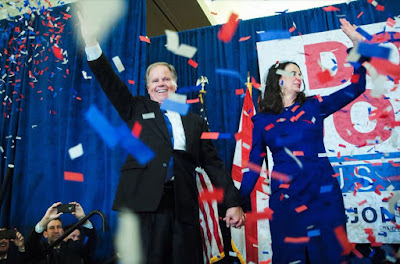 Caption: Doug Jones celebrated victory with his family and supporters on Tuesday night at the Sheraton Hotel in downtown Birmingham, Ala. Credit Bob Miller for The New York Times
*******


You know, it is my view that bad things happens in big, spectacular ways while good things happen, typically, only in stealth, hidden ways (usually between individuals rather than on a global stage). Tonight, though, something good happened (or perhaps something really bad did not happen) in a big way and the world is better for it.
--Regulus
Posted by Regulus at 11:57 PM