Continuing my fall image theme in my previous entry ...
"Autumn Day" by Peter White from his album Perfect Moment (1998)
I've featured Peter White in a number of Jukebox Saturday Night and antecedent Friday Night Musical Interlude entries. I really like his music.
*******


And continuing with a theme of fall leaves, here is one of the jazz standards ...
"Lullaby of the Leaves" by Art Tatum (c. 1940)
Here is some historical information on this piece: 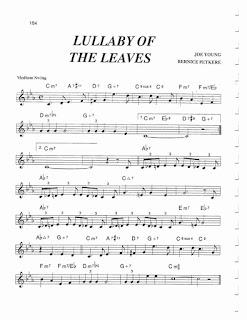 "Lullaby of the Leaves," by composer Bernice Petkere and lyricist Joe Young, was featured in the 1932 Broadway revue Chamberlain Brown's Scrap Book. Ina Hayward sang the song in the show which ran for only 10 performances.
According to Thomas S. Hischak in The Tin Pan Alley Song Encyclopedia, "The ballad was introduced on the radio by Freddie Berrens and his Orchestra, and there were soon records made by Ben Selvin and Connee Boswell.... 'Lullaby of the Leaves' soon became a favorite of jazz musicians, and many recordings followed...."
Source JazzStandards.com.
Bryan Wright featured this in his Nov. 26th Shellac Stack podcast.
*******


Although I've featured it just over two years ago in this JBSN edition, I would like to repost one of the great disco standards and so end on an upbeat note:
"Good Times" by Chic from the group's album Risqué (1979)
OK, that's all for now. I'm home watching the MeTV Super Sci-Fi Saturday Night lineup. Tomorrow is my Sunday free day.
--Regulus
Posted by Regulus at 11:51 PM