**This quote in the entry title appears not directly in the article below but rather the linked one -- which was also written by the same author and is itself sarcasm. 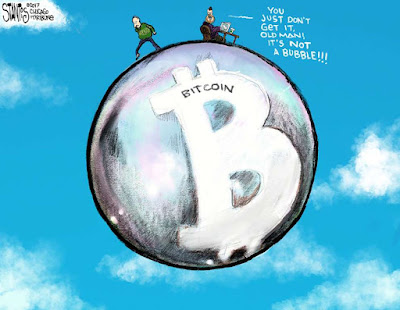 I came across the following article a short time while ago, and it's a frickin' riot (even with the redundant use of the word "idiot" in the headline and, yes, I made some syntactical and grammatical edits to this since where they were (clearly) needed) ... 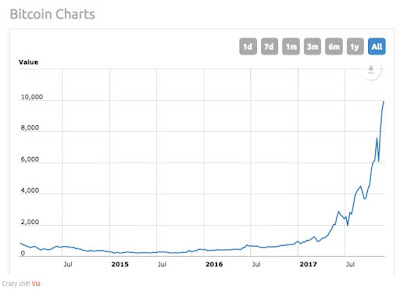 
Bitcoin is a fake and made-up scam. Can you articulate what it is? "Bullshit jargon that means nothing" -- you. Hell no. All we can say for sure about this imaginary "coin" is that it is going to cost you a bundle (sucker).
Here's a little history lesson for you. Some guy, or somebody, invented a thing called bitcoin, on the internet. Nobody knows what it is but you can buy drugs with it. Then people tell other people it's the future, then the price starts going up and up. In the past year, bitcoin has risen in price by A THOUSAND PERCENT. A single bitcoin now costs ten thousand freaking dollars. Ten thousand dollars is a lot of damn money, unlike a "bitcoin" which, who knows how much money it will be a week from now?
Untrustworthy.
There are two types of people out there in the world of "investing." There are those who look at that crazy ass chart of bitcoin prices, shooting straight up like a rocket, and say, "Whoa, this is as fragile as a damn hot soufflé, I ain't touching that!" Then there are the idiots -- like you -- who say, "Where can I get some 'bitcoin' to get rich, like all my 'gamer' friends?"
Hahaha


A wise man once said "What goes up must come down" and another, wiser man once said "All This Bitcoin Stuff Is Fake." It's not real, folks. For ten thousand dollars I'll go buy myself a Jet Ski with bad ass stripes on the side. Okay? And you buy yourself a bitcoin. And we'll see who has more fun.
If I pissed in an ice cube tray and told you it was a "block chain," would you empty your goddamn wallet at my feet? Get some sense, kid.
Hahaha


Mad? Go make all the angry comments you want on the internet. Then when the inevitable day comes when people wake up and realize they have a zillion dollars tied up in this imaginary thing that you can’t even eat, and the price comes crashing down, remember this day. Remember what I told you. Remember how hard headed you were. Remember who was stupid (you) and who was smart (me). Don't come by the house to apologize, though -- I'll be out on my Jet Ski. With a waterproof bag of cold and hard cash (U.S. dollars).
*******