A TrumpWorld December Not to Remember: Deep South Snows and Apocalyptic SoCal Fires 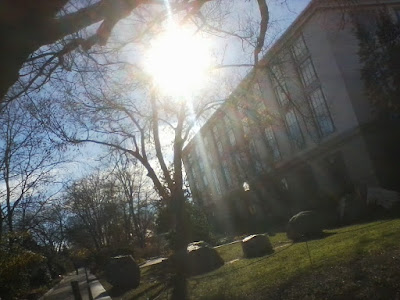 Brilliant December sunlight floods the grounds of the Smithsonian National Museum of Natural History along the walkway that runs parallel to the 9th Street Expressway (which runs under the National Mall), Washington, D.C., 1:17PM December 7, 2017.
I had to go to the Bank HO America on Pennsylvania Ave this afternoon -- and I took some pictures featured in this entry on the walk from and back to the office across the National Mall.
*******


Late night and I'm home after a good multipart gym workout but a work day that wasn't as productive as it should have been given that I have to complete two significant tasks by Monday (plus I have some weekend plans). I was going to start on the main editing assignment tonight -- and work into the wee hours -- but I'm just too damn tired. 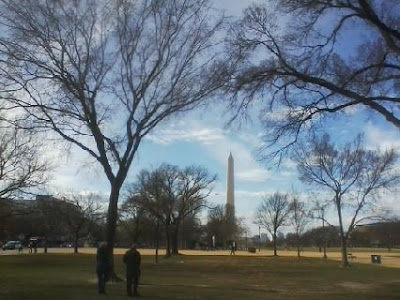 
As I write this, I'm watching an old Carol Burnett and Friends episode on MeTV. Looking back from all these decades later, the fact that Tim Conway would invariably leave Harvey Korman in stitches and just barely capable of staying in character (while Conway usually stayed fully in character) actually made those skits funnier than they would have been.
Later, I'll watch this and Perry Mason and perhaps The Twilight Zone, but then I need to go to bed.
Instead of working late tonight, I'll do my level best to get up early tomorrow and get into work earlier than I normally do. 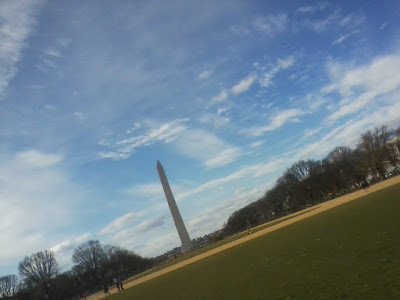 
So at this point, I would like to repost what will probably be the most memorable line from Sen. Al Franken's resignation speech in the Senate on Thursday: 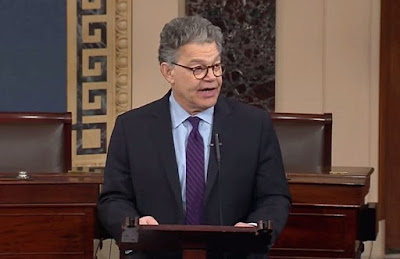 Nevertheless, today I am announcing that in the coming weeks, I will be resigning as a member of the United States Senate. I, of all people, am aware that there is some irony in the fact that I am leaving while a man who has bragged on tape about his history of sexual assault sits in the Oval Office, and a man who has repeatedly preyed on young girls campaigns for the Senate with the full support of his party. 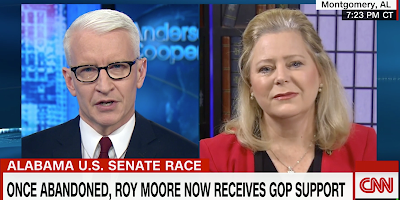 About that, Roy Moore really is a vile and reprehensible man who is almost certainly a sexual predator of under-aged girls (and that's not the only reason he is dangerously unfit to be a United States Senator. 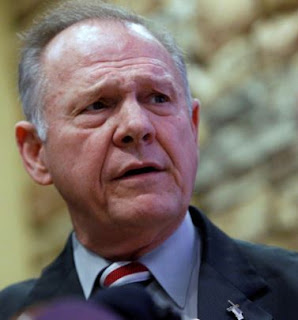 But the next United States Senator from Alabama he is likely to be after Tuesday's special election -- and the ever-more-Trumpified GOP and its hideously toxic political/media ecosystem basically welcome that. Indeed, his loudest supporters are as vile as he is, and I don't even want to be in the same country.


To that point, I would like to call attention to these two pieces -- one by Slate writer Dahlia Lithwick and the other (as a sort of affirmative response) by the great Charlie Pierce. They are here (links embedded):
Lithwick: The Uneven Playing Field
Sub-headline: Sure, don't stoop to their level. But let’s acknowledge that the game Republicans are forcing everyone to play insists morality is for losers. 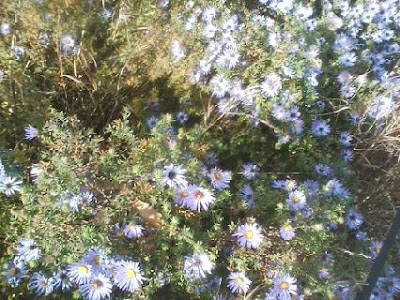 Flowers just off the National Mall, Washington, D.C., 1:00PM December 7, 2017.
There was a sign explaining what type they were but I don't recall. These flowers were growing along the sidewalk near where 12th Street (not the expressway part that runs underneath the Mall) intersects Madison Drive NW.
*******


Closing paragraphs:
Who knows why the GOP has lost its last ethical moorings? But this is a perfectly transactional moment in governance, and what we get in exchange for being good and moral right now is nothing. I'm not saying we should hit pause on #MeToo, or direct any less fury at sexual predators in their every manifestation. But we should understand that while we know that our good faith and reasonableness are virtues, we currently live in a world where it's also a handicap.
Unilateral disarmament is tantamount to arming the other side. That may be a trade worth making in some cases. But it's worth at least acknowledging that this is the current calculus. It's no longer that when they go low, we get to go high. They are permanently living underground. How long can we afford to keep living in the clouds? 
Pierce: I Don't Think the Moral High Ground Exists Anymore
Closing excerpts:
Ah, but now, we are told, they have The Moral High Ground, as though you needed to throw one of your own overboard in order to have the moral standing to oppose seating an alleged child molester in the Senate, or to remind people that the president* copped to sexual assault on tape.
Lithwick is dead right. There is no commonly accepted Moral High Ground left to occupy anymore, and to pretend one exists is to live in a masturbatory fantasyland. It’s like lining yourself up behind Miss Manners in a political debate against Machiavelli. 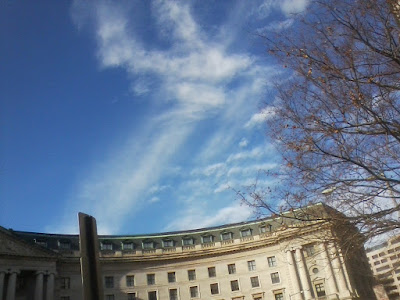 
Continued excerpt:
Until the Democrats are willing to think asymmetrically about the very real political danger posed by the president* and his party, the danger will grow until it becomes uncontrollable, and that point is coming very soon, I fear. By the time the Democrats admit to themselves that their political opposition has moved so far beyond shame that it can’t even see Richard Nixon any more, the damage wrought to our political institutions may be beyond repair...
You look across a political landscape like the one that the last few decades have created, and the Moral High Ground looks like the lichen-mottled ruins of a dead civilization. 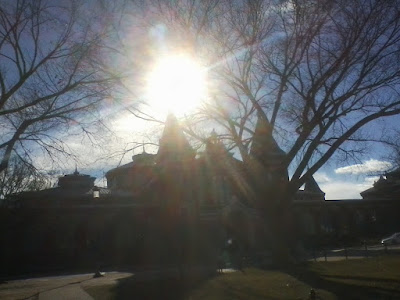 Dazzling sunlight through the bare trees near the Arts and Industries Building of the Smithsonian Institution, Washington, D.C., 1:21PM December 7, 2017.
The building was again closed. 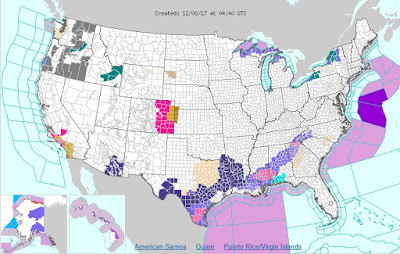 NWS weather advisories for the United States and adjacent waters updated 0440UTC December 8, 2017.
This is without the legend but those are winter storm warnings, winter weather advisories, and freeze warnings for far South Texas.
*******


So I should mention that the weather now has the prospect of accumulating snowfall here in the Metro D.C. and Baltimore areas on Saturday and Saturday night. What's more, the antecedent system -- a strong cold front pushing all the way into the Gulf of Mexico ushering in a broad 500-mb trough and including a strong upper level jet streak with isentropic lift -- is creating rain AND snow across South Texas tonight.


Indeed, there is accumulating snow from San Antonio to College Station, Texas tonight. San Antonio Int'l Airport (KSAT) has had 1.4 inches of snow -- the most in a single event since 1987. 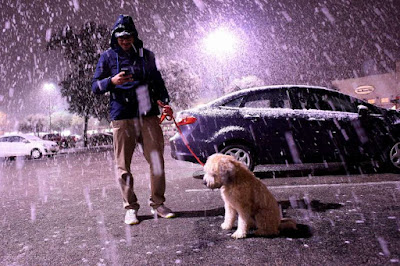 Caption from the San Antonio Express-News article (see link above): Matt Debrizzi and his dog, Huey, enjoy the snowfall near the intersection of Hurbner and Interstate 10 on Thursday night, Dec. 7, 2017.
******* 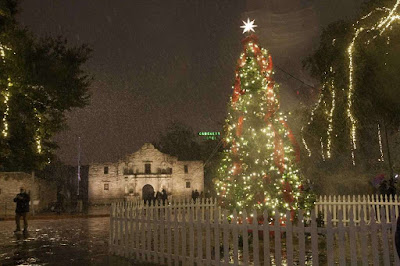 Yes: Snow at the Alamo and with a suitably-placed Christmas tree, San Antonio, Texas, Dec. 7, 2017.
This is an image you likely will not see again for quite some time.
*******


The system is forecasted to traverse the Deep South with accumulating snowfall (several inches) possible in parts of interior southern Mississippi and across central Alabama (where any snowfall will certainly be taken by the Fundie Faithful as a Sign from God to double down on voting for Roy Moore) and finally into Georgia where the Metro Atlanta area could have a few inches of snow (along with substantial amounts in the north Georgia mountains and Smoky Mountains). 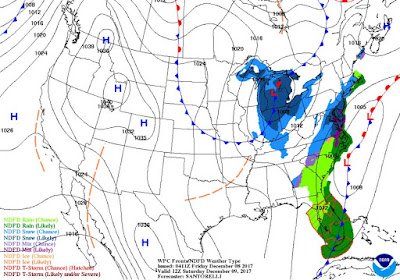 
Waves of low pressure will ride along the stalled frontal boundary across the northern Gulf of Mexico and then up the Southeastern U.S. coast until finally a single intensifying coastal low pressure takes over and becomes a nor'easter off the New England coast. 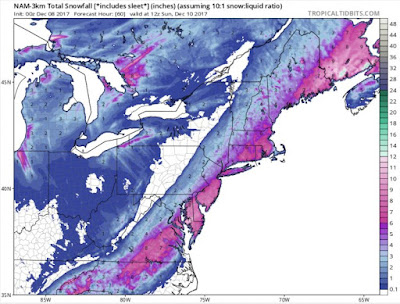 
Accumulating snowfall is looking likely along the coastal plain and as far west into the Blue Ridge. Finally, the low should intensify into a nor'easter off the coast of New England as it pulls away. This will be followed by a minor clipper system that accompanies a re-enforcing shot of Arctic air and establishes a deep upper level trough for a few days across the northeastern U.S. before that passes offshore. 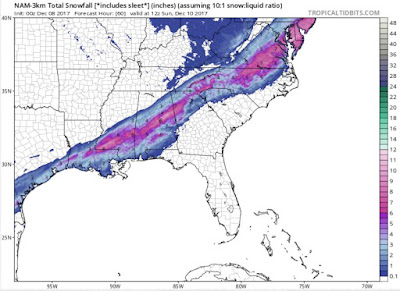 
As the CWG's Kathryn Prociv pointed out in a tweet: 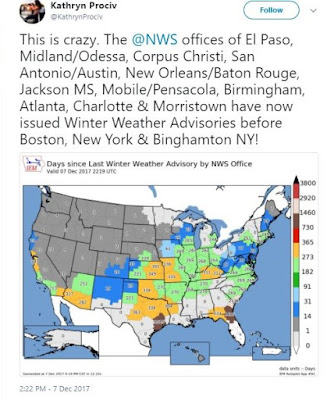 
I should also note that there is an absolutely devastating series of wildfires burning across Southern California creating scenes that are nothing less than apocalyptic -- and destroying so far 400+ homes and buildings in Ventura County. 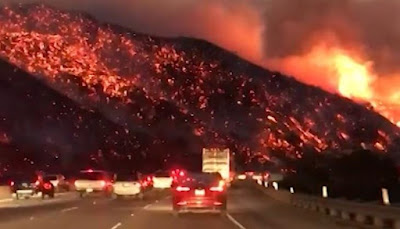 Hillside wildfires raging out of control right next to a busy freeway in Southern California, early December 2017.
I don't have an exact date or location for this image but it was in the last 72 hours.
*******


These fires are new ones -- and in addition to the October conflagration in Sonoma and Napa Counties that burned 200,000 acres, destroying 8,400 buildings and homes and killing 42 people (the highest ever in the state for a fire). 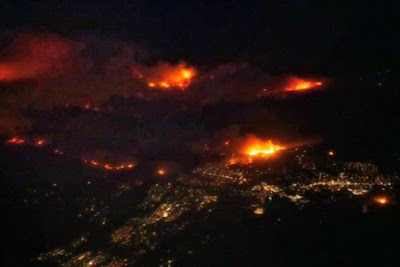 
OK, I think that's all for now. Obviously, this entry got way ahead of what I intended to post -- and it is damn near 3AM.
Unless we get a signficant snowfall, my next planned entry will be on Saturday -- and it will likely be just a Jukebox Saturday Night Edition that I post early (since I am going to a coworker friend's house party up in the White Oak area of Silver Spring, and I'm catching a ride with someone). On Sunday, I might be meeting Damon, whom I've not seen in nearly two years. 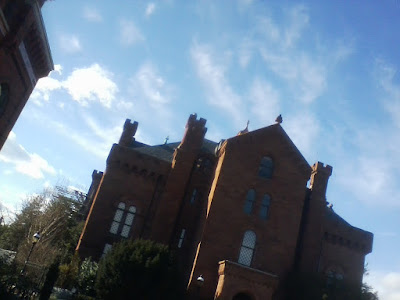