A Christmas Story 2017: To Annapolis, Baltimore, Glen Burnie, and Back -OR- If Not Silent or Holy, Certainly Friendly 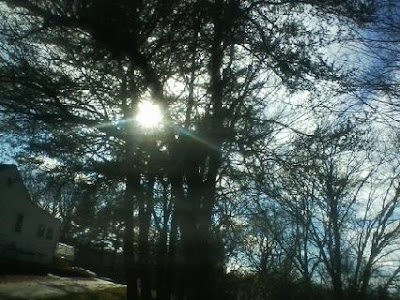 Sunlight flashes through the trees along Sunrise Beach Rd, Crownsville, Md., 1:28PM December 25, 2017.
I took this picture early this afternoon while my mom and I were headed to the veterans cemetery to visit Ray's grave.
This entry contains photos taken over the past few days of this Christmas vacation to include earlier today, yesterday at Rusty Scupper, and on Saturday night in Annapolis at Middleton Tavern.
****** 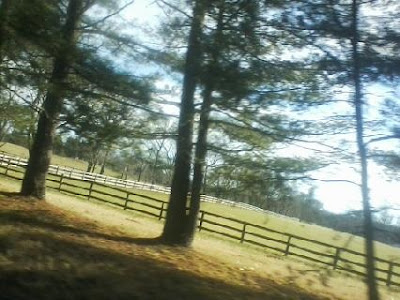 
Christmas Day 2017 -- well, now nighttime of Christmas Day. I'm still here in Glen Burnie visiting my mom. I head back to D.C. tomorrow late morning on the MARC train.
It has been a nice Christmas with both my mom and seeing Lynda on Saturday (more on that below). I also had a lengthy (nearly 70 minute) phone chat with my dad a short while ago. He's doing fine. 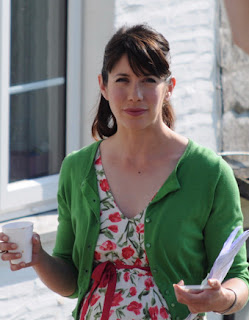 I will say dad seems to have a bit of a fixation on the show Doc Martin and, in particular, the actress Caroline Catz. Not only does he want to send her a fan letter, but he also actually wants to visit Port Isaac in Cornwall -- where the show is filmed as the fictitious "Portwenn" -- during the filming of an episode in the planned season 9. 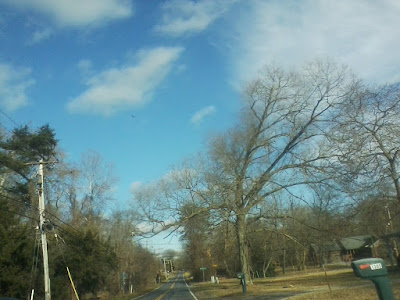 
As I mentioned, my mom and I went to Ray's grave at the Maryland Veterans Cemetery Crownsville. It was a brilliantly sunny, blustery day with a biting west/northwesterly wind. Midday highs were in the mid-30s Fahrenheit (recall an Arctic front pushed through in the wee hours). Winds gusted to 30-35mph at times (although the forecast of wind gusts up to 50mph did not materialize). 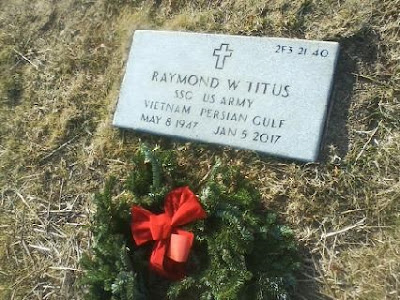 
We came home and watched one of the TNT airings of the perennial classic movie A Christmas Story and then had dinner around 4PM. I ate and drank too much -- or maybe the wrong things -- including a heavy spaghetti dinner combined with part of a rum-spiked egg nog, which left me feeling a bit ugh for a while. 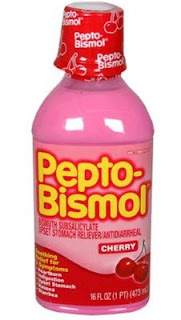 The issue is that I get full (filled?) quite quickly and it is easy for me to overeat in a particular "sitting."

I tend to eat a little bit at a time. Isn't that referred to having a "bird-like" appetite?

Relevant line from The Golden Girls:

Blanche: I have a bird-like appetite. 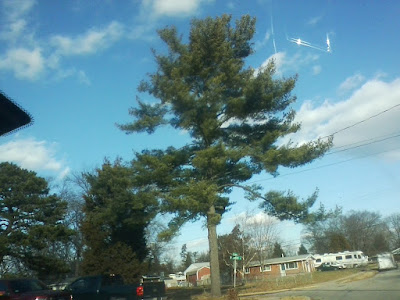 A large evergreen tree growing at the corner of St. James and Nottingham Drives in Glen Burnie, Md., 2:01PM December 25, 2017.

I'm watching on WHUT 32 a program "The First Silent Night" on the history of the most famed of Christmas carols, Silent Night. 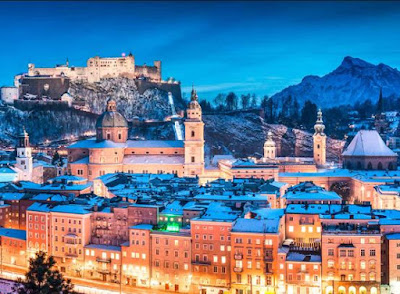 Hosted by British actor Simon Callow, CBE, it includes biographical information on Father Josef Mohr himself, the writer of the words to Stille Nacht, heilige Nacht, and lots of historical overview -- to include stunningly beautiful footage -- of Salzburg and nearby villages in the Austrian Alps. 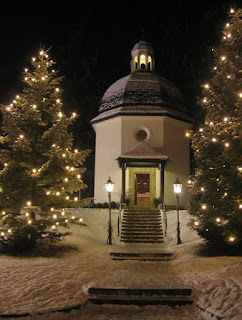 Among those villages were Arnsdorf, where lived Franz Xaver Gruber, the school-master and organist who, in collaboration with Fr. Mohr, composed the carol's German lyrics, and Oberndorf bei Salzburg, where is the small Silent Night Chapel (pictured left) in which the very first rendition of Silent Night was performed on Christmas Eve 1818.


For the rest of this entry, I would just like to post, self-indulgently, some selfies of myself ... 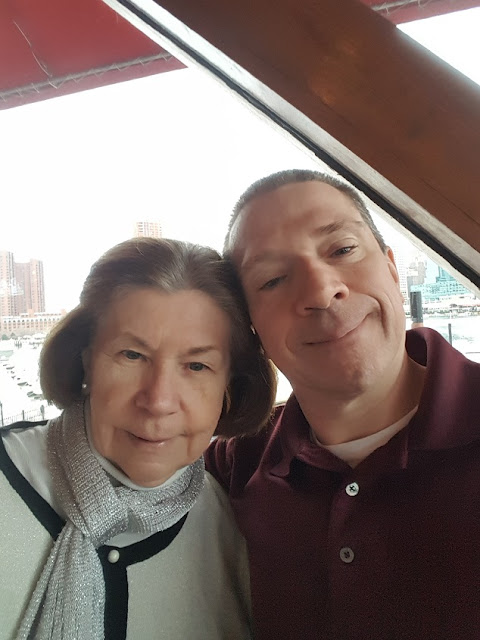 
This was my third time at Rusty Scupper with my mom. The first time -- this past May for Mothers Day and three years prior in April 2014 with Ray. She was also there for her 41st anniversary with Ray in December 2015. 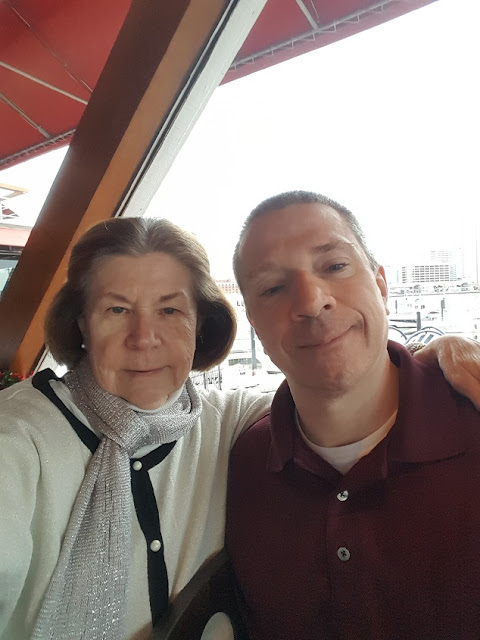 
The next few pictures are of my dear friend Lynda and me taken at Middleton Tavern in Annapolis on Saturday night ... 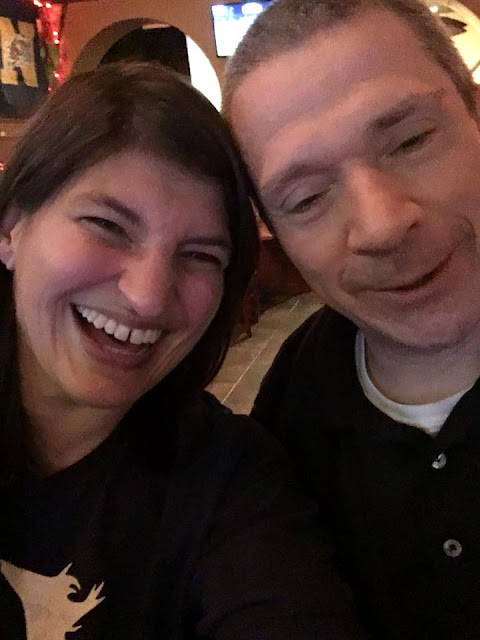 Lynda was a high school classmate (Class of 1988) and friend from the mid-to-late 1980s, and then for a time at St. Mary's College before I abruptly departed there in Sept. 1992 to go to the D.C. area, but whom I had not seen in 20+ years until just a few months ago when she reached out to me via my blog (this was the second time did so following an initial attempt about two years ago). Lynda is a high school economics and history teacher for Anne Arundel County Public Schools and a mother of three teenage children. She is just also a wonderful person.
I have to say I am so glad that she came back into my life. I've had to end SO many bad / unhealthy / failed friendships end in the past five years that this has been such a refreshing and pleasant change. 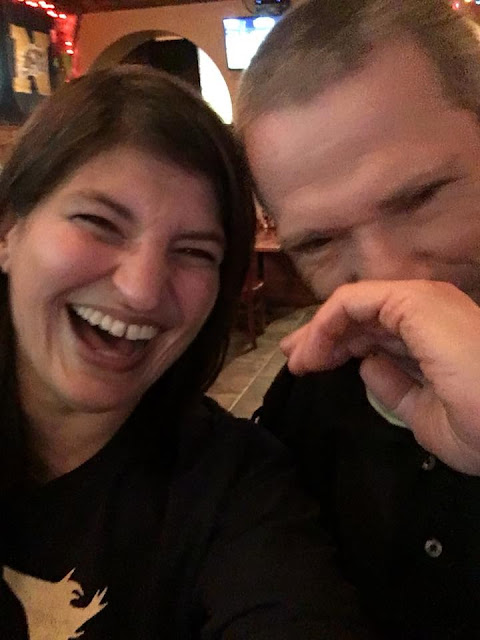 We stayed for about an hour and half at the downstairs bar and then went to the small upstairs piano bar, where there was a really good performer, although it was the space was too small for how loud it was. I also had a brief conversation with a guy named Chris from Annapolis.
We left around 10PM and she drive me back to Glen Burnie. I would like to invite her to D.C. on a Sunday for the day.
OK, that's all for now. I will try to post an entry late tomorrow (after the gym) but it might not be until midweek.
--Regulus
Posted by Regulus at 11:58 PM